Daring Duchess! Kate put her own stamp on her £790 Gucci blouse by wearing it BACKWARDS for a visit to a London children’s centre

By Rebecca English, Royal Correspondent for the Daily Mail

No doubt the designers at Gucci put a lot of thought into how their creations should look.

But at the end of the day, the wearer is entitled to put their own spin on things.

And the Duchess of Cambridge certainly had a different take on the label’s £790 blouse yesterday – seemingly wearing it back to front.

The purple silk-crepe pussy-bow shirt has a row of small buttons down the back, according to Net-a-Porter. But Kate noticeably put hers on with the buttons at the front. 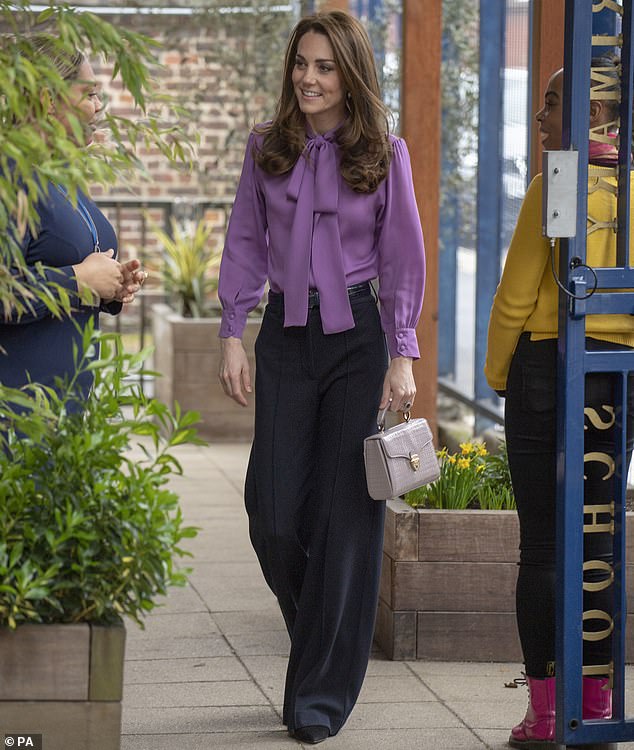 Fashion forward: The Duchess of Cambridge wore her Gucci blouse backwards for a visit to the Henry Fawcett Children’s Centre in London yesterday, pictured 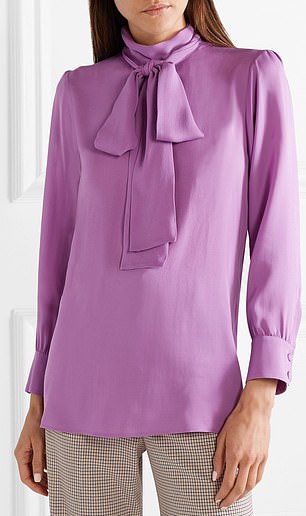 The Gucci shirt, as seen on Net-a-Porter above, is intended to be worn with a plain front (left) and the the button detail at the back (right). However Kate reversed the garment

The switch meant the seams on the shoulders and buttons on the cuffs didn’t fall exactly as they should – and the bow was pulled round her neck and fastened looser and lower.

Whether this was by accident or design wasn’t clear – and Kensington Palace weren’t commenting.

Either way, the ensemble was a popular choice among style experts who hailed her choice of blouse – which she sported with wide-legged £130 Jigsaw trousers and block-heeled shoes – as an unusually fashion forward look for the duchess.

The Duchess of Cambridge looked perfectly polished as she arrived for the visit to the Henry Fawcett Centre. She teamed the Gucci blouse with £130 trousers by Jigsaw 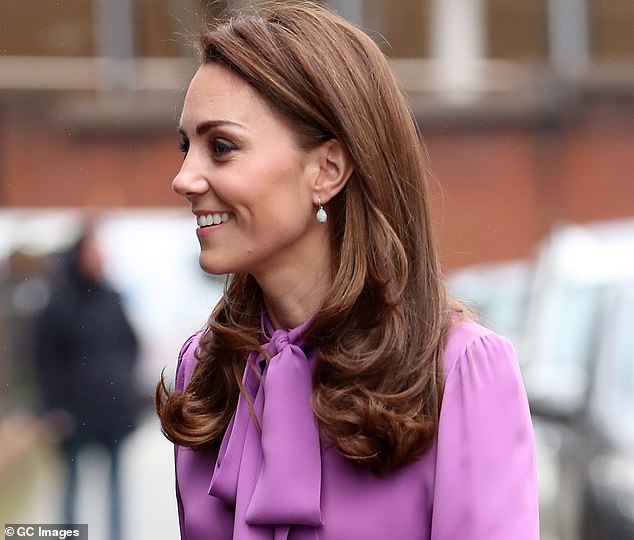 With her wide leg trousers and silk blouse, the Duchess of Cambridge cut an elegant figure for the outing on Tuesday. She finished the look with a £595 bag from Aspinal of London

Despite wearing an expensive silk shirt, the Duchess was still eager to join in the fun and happily sat and cuddled little ones as they toddled across the soft play mats.

Swapping stories with other parents, Kate revealed her 10-month-old son Louis has started to ‘bomb around’ in his walker.

‘Louis just wants to pull himself up all the time,’ she told one mother. ‘He has got these little walkers and is bombing around in them.’

The Duchess of Cambridge waved to well-wishers as she left the children’s centre, right, and made her way to her car

The outing comes just a few weeks after the Duchess revealed she was feeling ‘broody’ while speaking to well-wishers during a visit to Northern Ireland.

Kate was visiting the centre to learn more about support being offered to youngsters and their families through Lambeth Early Action Partnership (LEAP).

The duchess took part in session of ‘Together Time’, where parents can come with their children and learn from each other and childcare professionals.

It was, unsurprisingly, noisy but Kate, also mother to George, five, and Charlotte, three, took it all in her stride as she sat down to chat to families who were there about everything from bath time to breast feeding.