The Duchess of Cambridge couldn’t keep the smile from her face as she played with toddlers at a London children’s centre this morning.

Radiant Kate, 37, beamed as she spent time with the youngsters and their families during the visit to the Henry Fawcett Centre in Kennington.

The royal mixed high street and high end for the outing, pairing a new £790 Gucci blouse with a favourite pair of £130 high waist trousers by Jigsaw.

But despite wearing an expensive silk shirt, the Duchess was still eager to join in the fun and happily sat and cuddled little ones as they toddled across the soft play mats.

The Duchess of Cambridge couldn’t keep the smile from her face as she played with toddlers at a London children’s centre this morning. Despite wearing a silky blouse, Kate was still eager to give the little ones a cuddle as they toddled on the mat 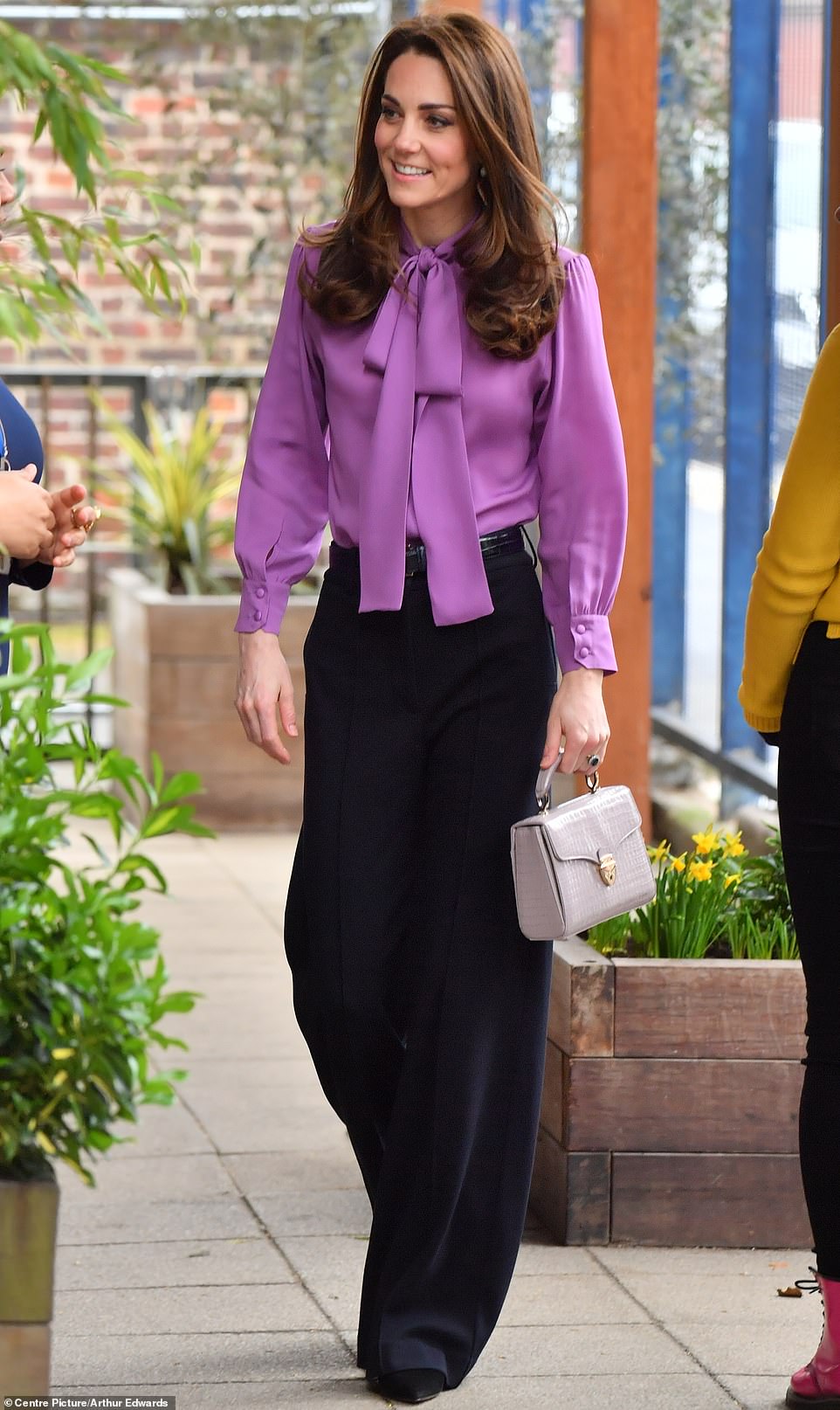 The Duchess of Cambridge looked perfectly polished as she arrived for the visit to the Henry Fawcett Centre in Kennington.  Kate, 37,  wore a £790 purple pussy bow blouse by Gucci with flattering high waist trousers from Jigsaw 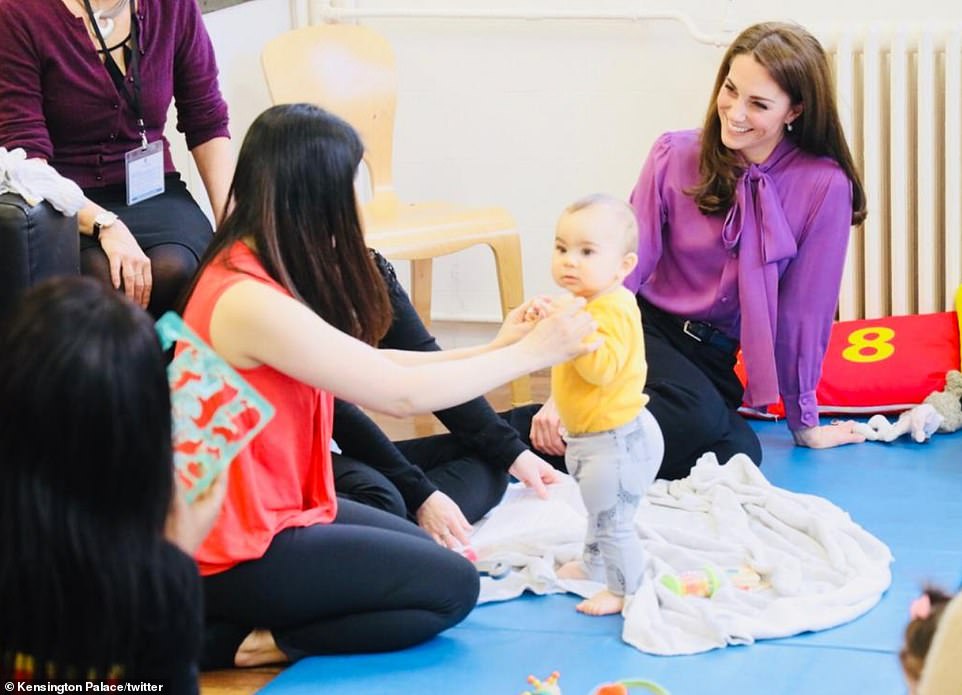 The Duchess of Cambridge beamed as she spoke to parents and toddlers taking part in a Together Time session offered by the Lambeth Early Action Partnership. The programme is designed to help parents better understand their child’s emotions 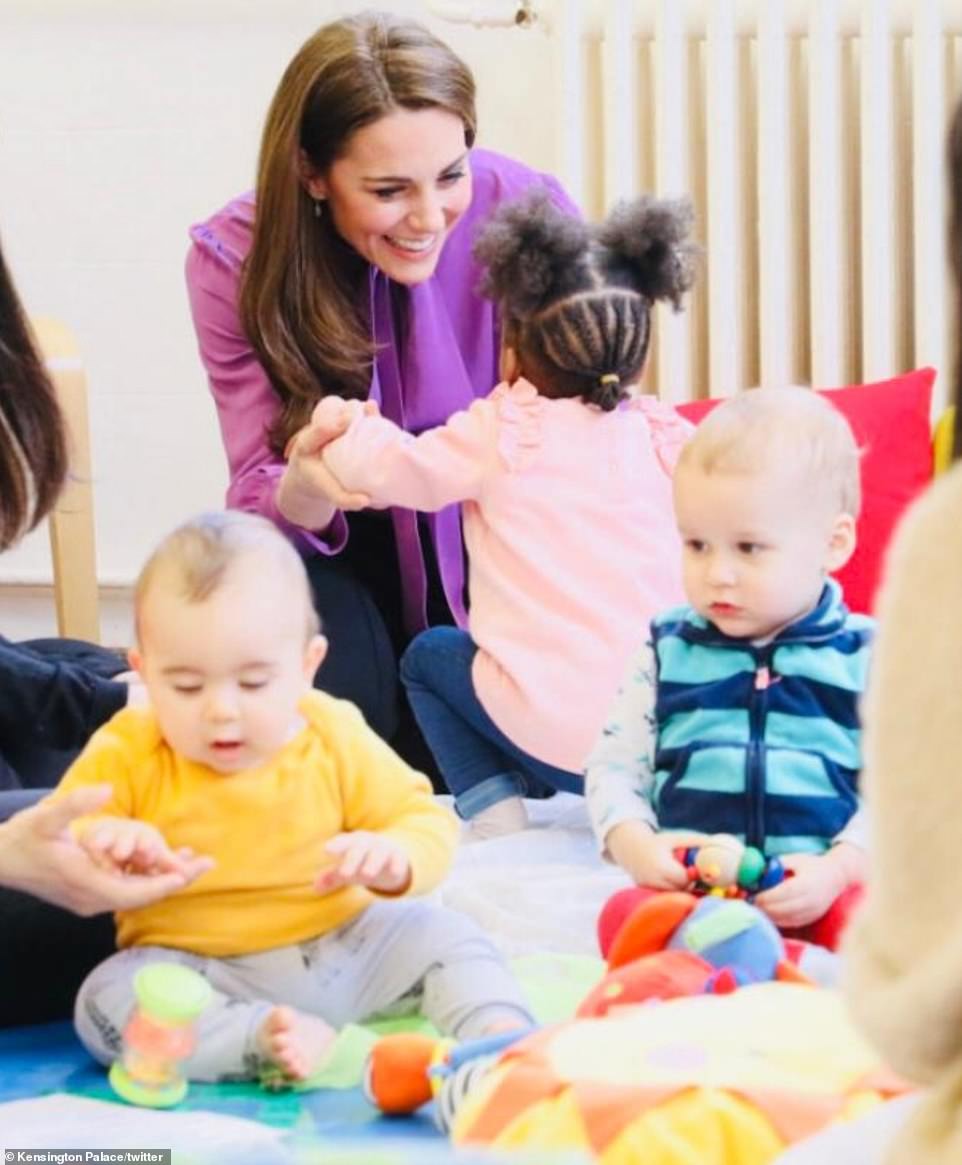 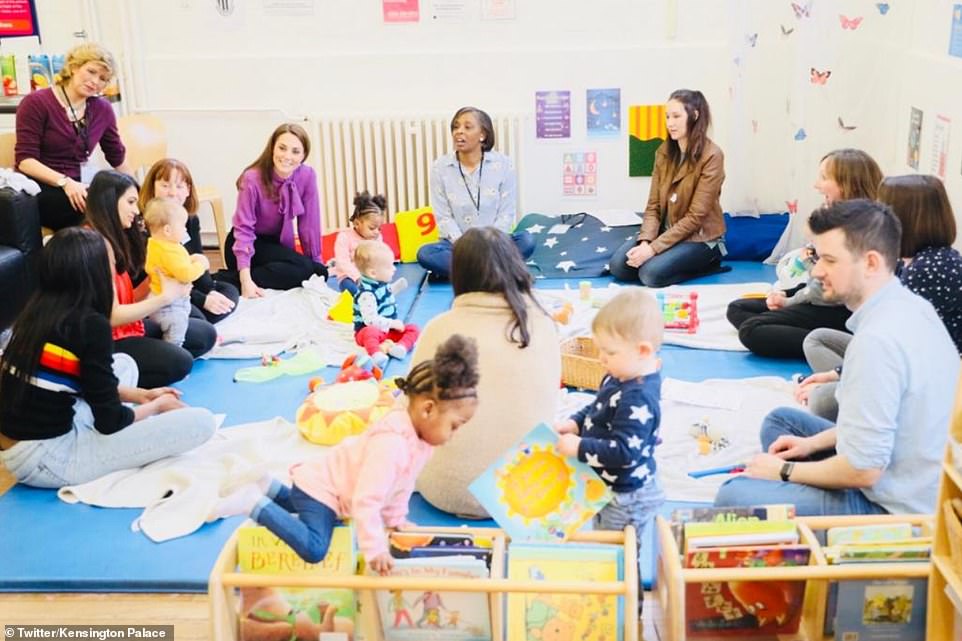 Kate joined parents and their children, aged between 0 and four, for the circle session at the Lambeth children’s centre

The royal, who is mother to George, five, Charlotte, three, and Louis, 10 months old, looked perfectly at ease as the children chattered and played around her.

She could be seen holding onto their hands and offering a support as they took tentative steps across the mats.

The Duchess was taking part in two sessions offered by the Lambeth Early Action Partnership (LEAP), which works to support young children and their families.

Circle of Security, offered to children aged up to four years old, helps parents and care givers better understand their child’s emotions, as well as supporting their child’s ability to successfully manage their own emotions.

Together Time, offered to children of the same age, supports attachment and bonding between parents and infants.

The Duchess of Cambridge appeared in excellent spirits as she arrived for the engagement this morning, pictured 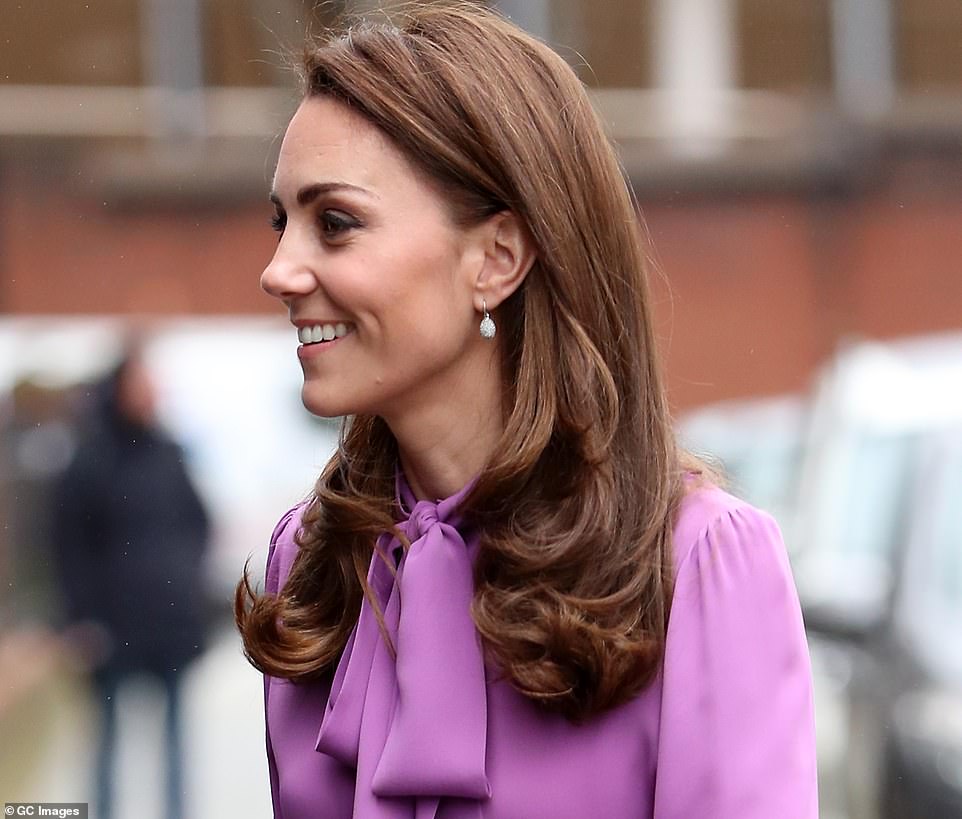 With her wide leg trousers and silk blouse, the Duchess of Cambridge cut an elegant figure for the outing on Tuesday

The visit continues The Duchess’s focus on Early Years, and comes shortly after The Duke and Duchess of Cambridge met with frontline service providers at the Better Start programme during their visit to Blackpool.

Today the Duchess gave a nod to one of this season’s must-have colours in her lilac silk-crepe blouse by Italian fashion house Gucci.

The flattering shirt has a loose silhouette and features fabric-covered buttons that run down the back.

She teamed the new wardrobe purchase with a pair of high waist black trousers by Jigsaw that she previously wore on a visit to Cyprus in December last year. 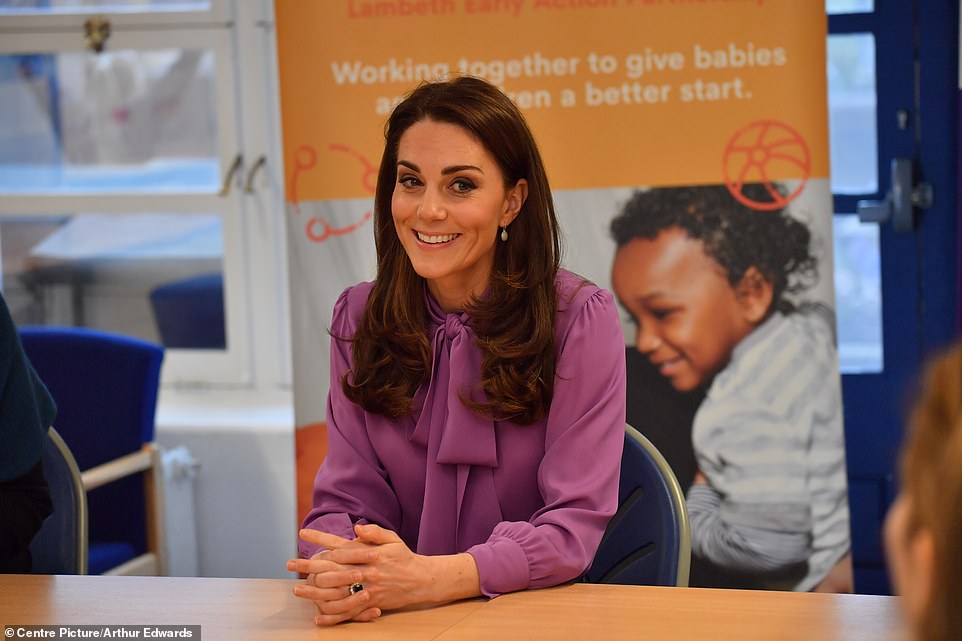 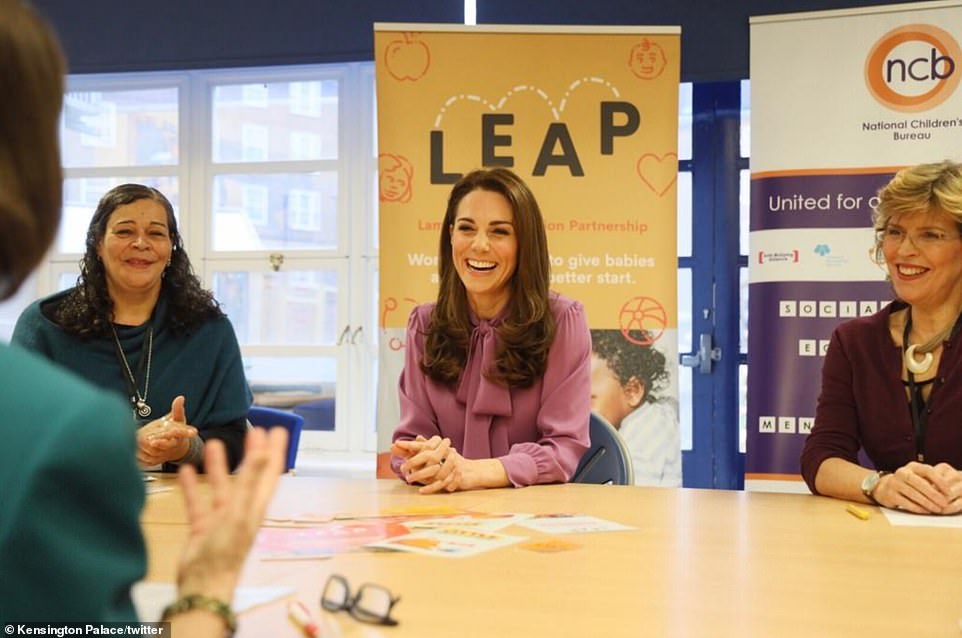 The royal wore her long brunette locks blown out and accessorised with a simple pair of drop earrings and an elegant Aspinal of London handbag.

LEAP was set up by A Better Start, a major funding initiative from The National Lottery Community Fund, and is seeking to test new ways of making support services for families stronger.

Her Royal Highness will join parents and their toddlers taking part in sessions called ‘Circle of Security’ and ‘Together Time’, to see different examples of what is available as part of the programme.

It has already been a busy week for the Duchess. Yesterday she joined the Duke of Cambridge, the Queen and other senior royals for a special Commonwealth Day service at Westminster Abbey.

The Duchess of Cambridge waved to well-wishers as she left the children’s centre, right, and made her way to her car 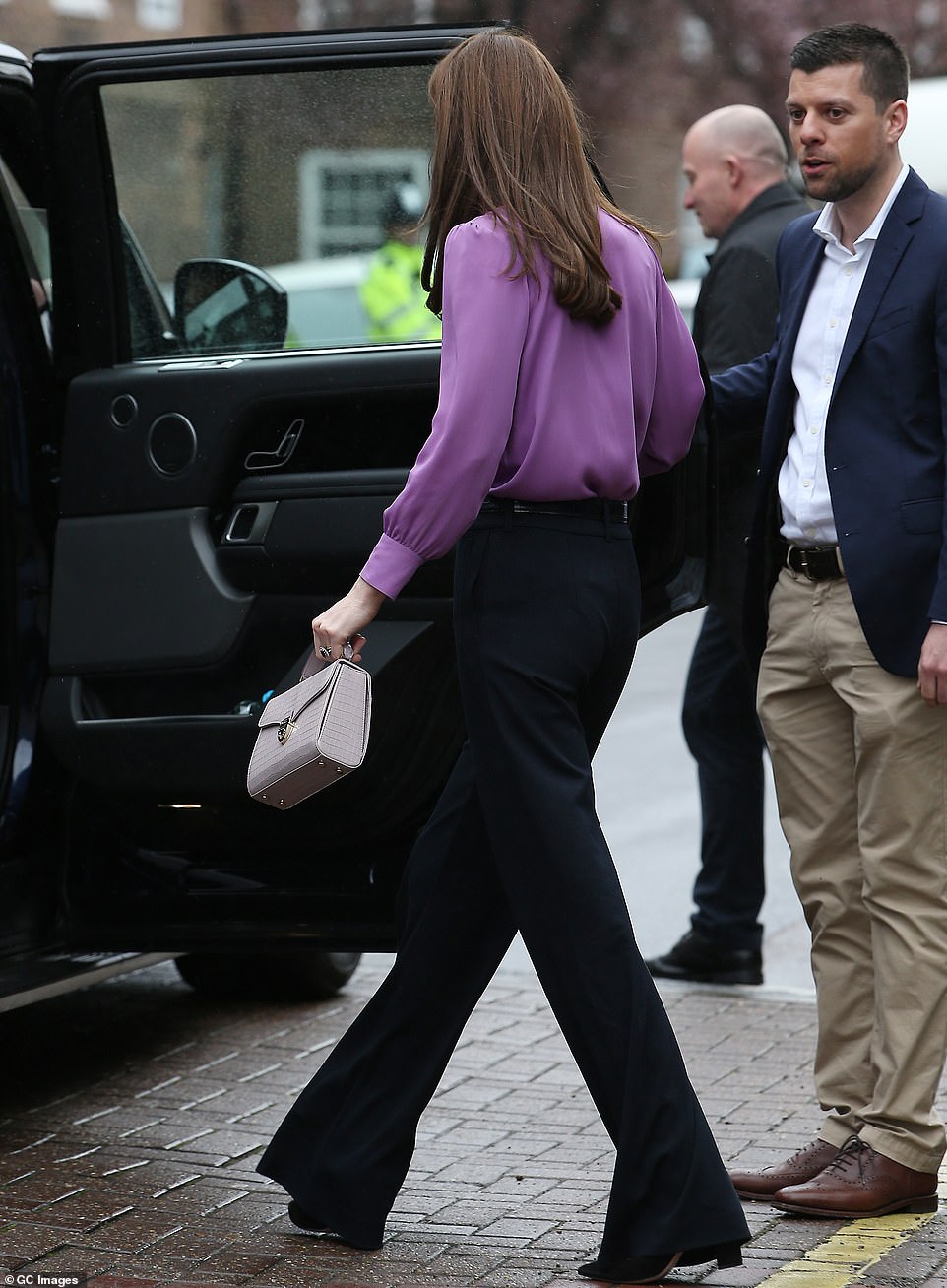 The Duchess of Cambridge left the centre in a waiting car. She will later step out for an event at the National Portrait Gallery

This evening the Duchess of Cambridge will step out for the Portrait Gala at the National Portrait Gallery, of which she is patron. 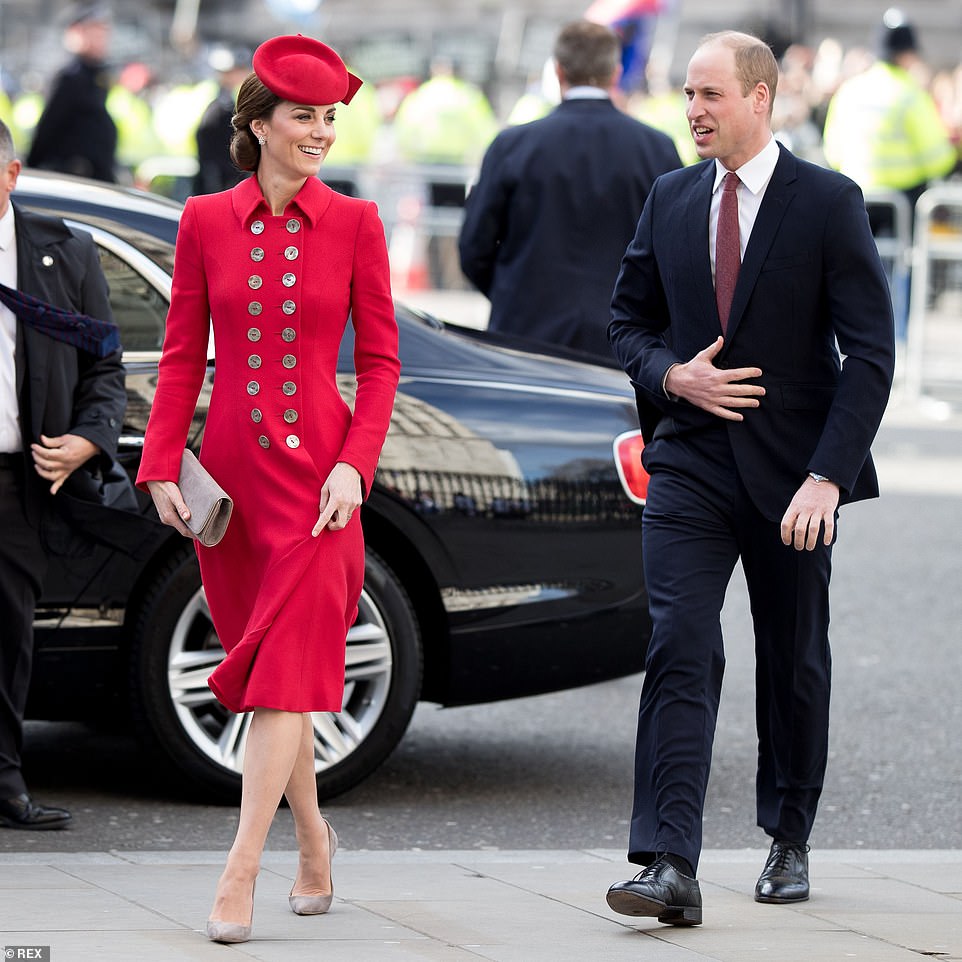 It has already been a busy week for the Duchess. Yesterday she joined the Duke of Cambridge, the Queen and other senior royals for a special Commonwealth Day service at Westminster Abbey, pictured 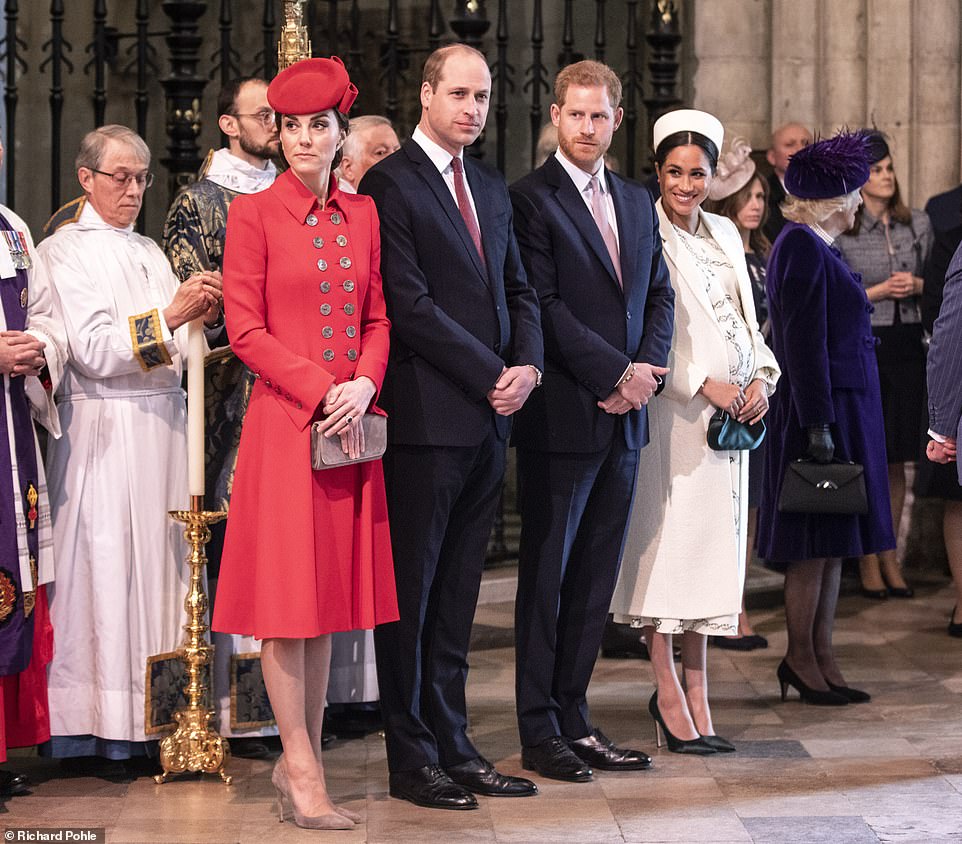