She was boasting about ‘juicing’ and ‘eating salads’ after reforming her party girl ways at the start of 2018.

But Kate Moss was treading some familiar ground on Monday night, as she was pictured stumbling out of a Ciroc party in celebration of her photographer friend Mert Alas’ birthday.

Looking like she’d enjoyed a top night on the tiles, the bleary-eyed model, 44, made a little unsteady exit, just hours after a grand entrance in his cake.

Glamazon Kate emerged from a huge white birthday cake inside the MNKY HSE venue where stars gathered to honour the professional snapper.

With microphone in hand, fun-loving model Kate perched on the edge of his cake in a provocative style, while she tickled the ivories with a birthday tribute before hopping out to share a warm embrace with her friend.

Kate looked exquisite in a figure-hugging dress adorned with bright embroidery and accessorised with a fur stole, ready for her departure in the early hours. 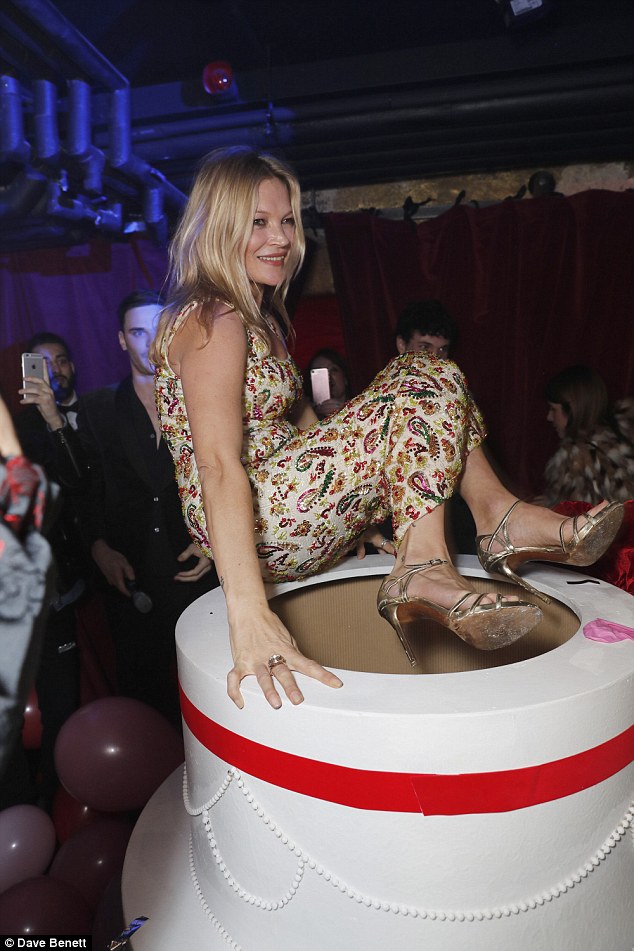 The Kate’s out of the bag! Kate made a grand entrance in a cake presented to her photographer friend Mert Alas 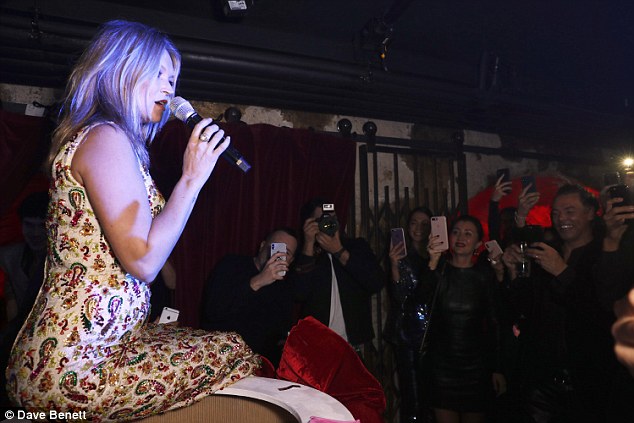 Grand entrance: Kate perched on the edge of the cake and sung a birthday theme 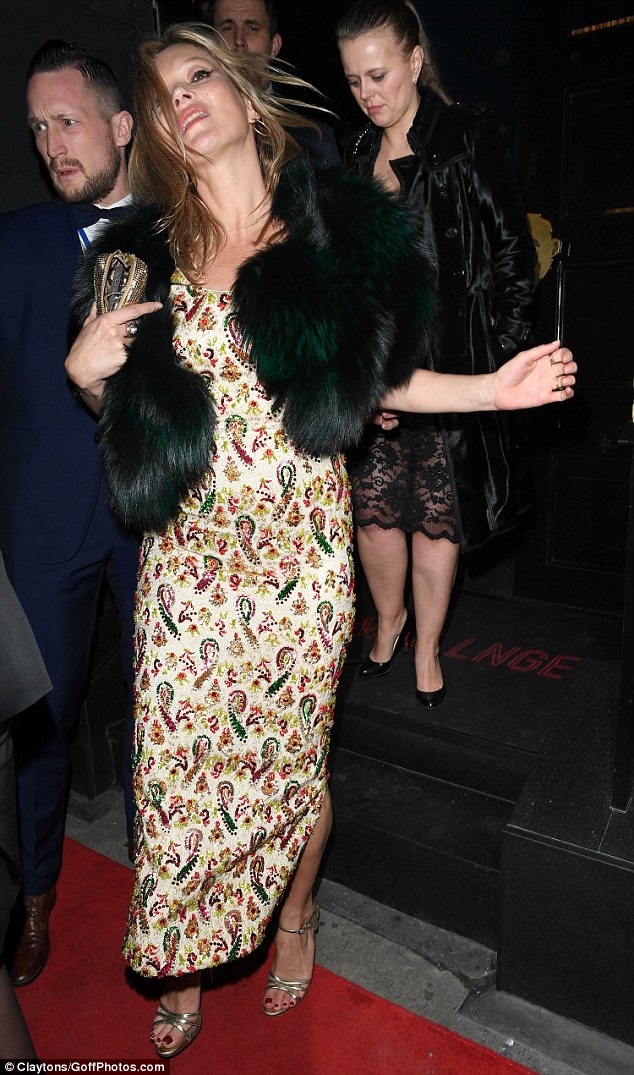 Steady as she goes: The bombshell looked positively giddy as she exited the venue 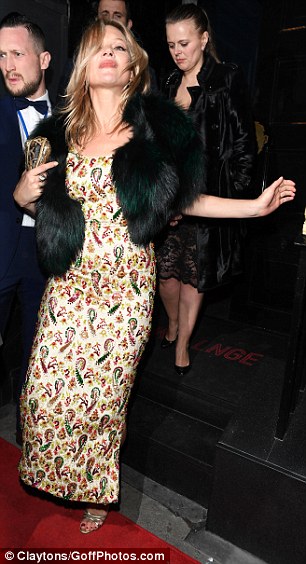 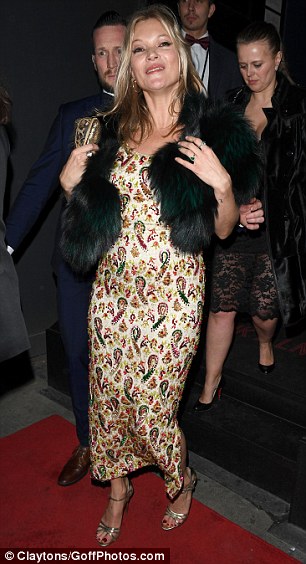 Having a laugh: The model laughed at herself as she tripped on her way out Time for bed: She looked about ready for bed as helping hands guided her out of the party

And the beauty certainly seemed to have got into the spirit of the festivities, as she was escorted out with a few helping hands.

She was still laughing and joking as she returned to the red carpet, somewhat more dishevelled than she had been when she arrived.

Her spirit was infectious and she entertained onlookers with her jovial display, before hopping into a cab and calling it a night.

Who, me? Kate laughed and joked as she embraced her intoxicated state 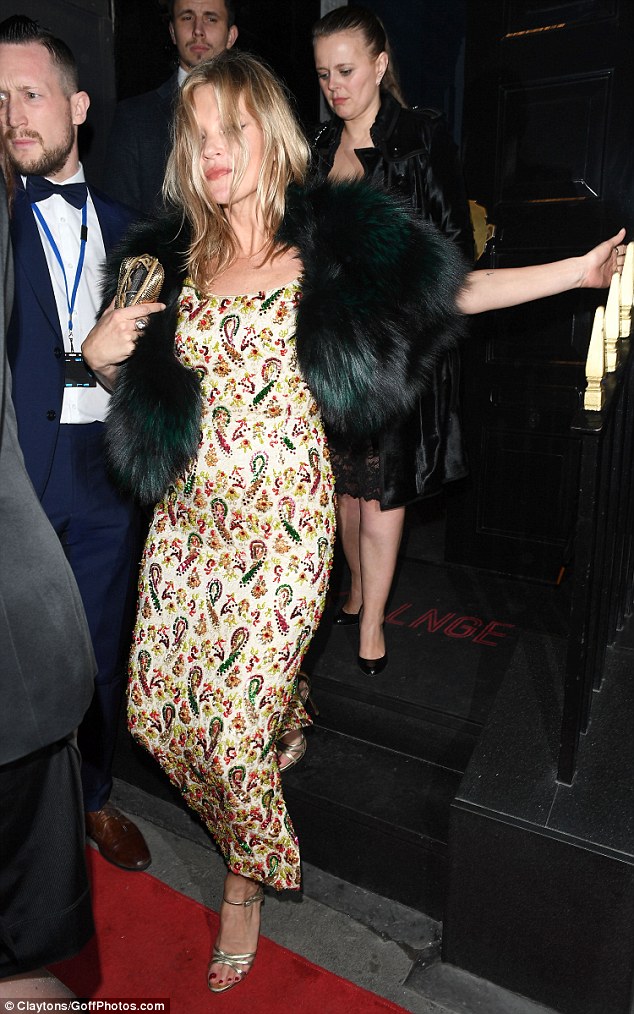 Bye for now: Previously, Kate had hinted that her party girl days were behind her 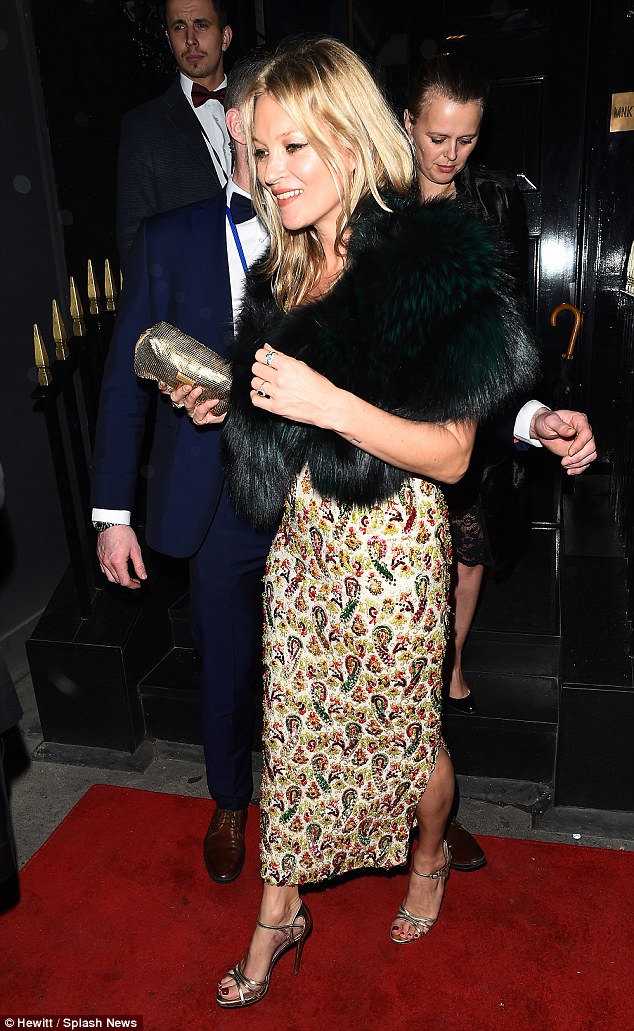 Still smiling: She managed to make it look effortless, once the stairs were out of the way 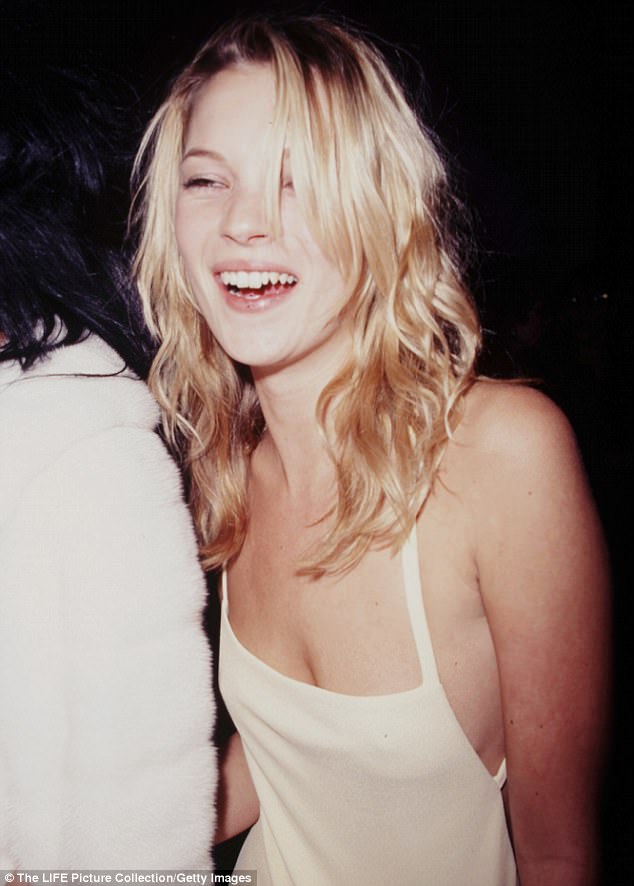 Back in the day: At the height of her career, Kate was earning around £3m a year, and hit the headlines numerous times with her scandalous late night outings (pictured in 1990)

Kate previously earned something of a party girl reputation in her youth, when she was often pictured falling out of London clubs.

But earlier this month she claimed to have overhauled her lifestyle in order to stay fit and healthy as she gets older.

Speaking to the Guardian, the Croydon-born model, 44, revealed she recently lost an inch off her waist in just 10 days, after taking on a clean diet and finally joining a gym. 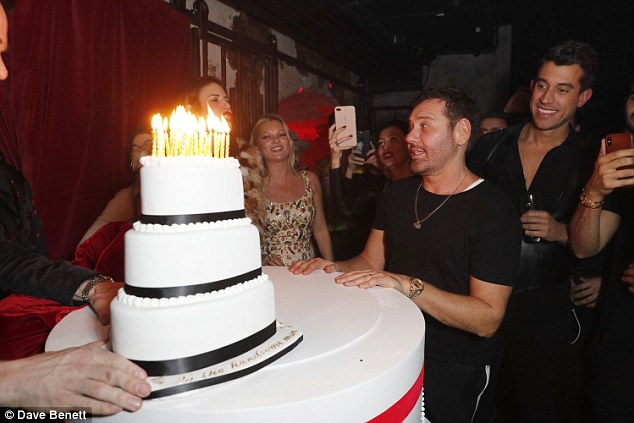 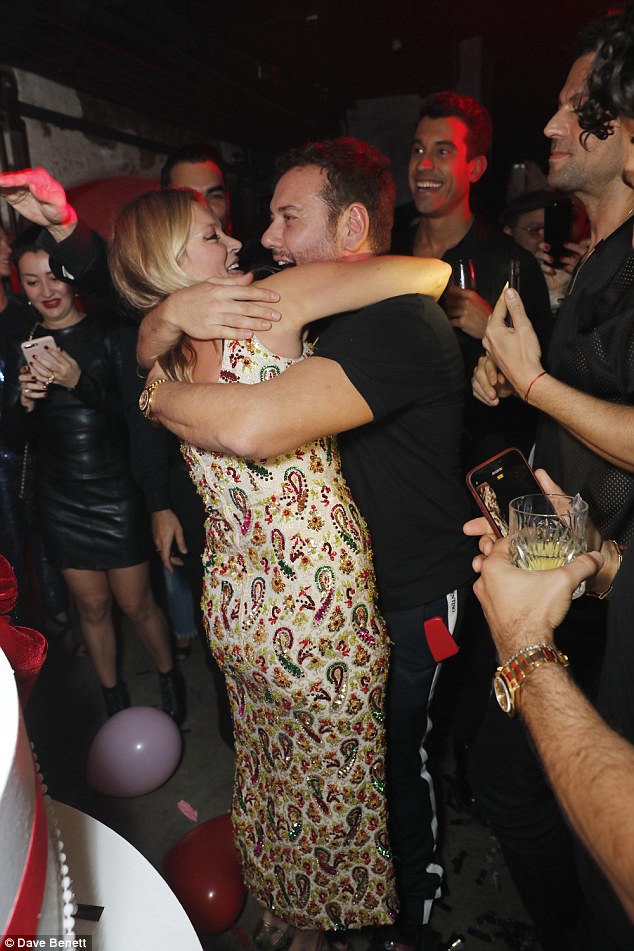 Welcome! Kate received a warm hug from her friend after jumping out of the cake 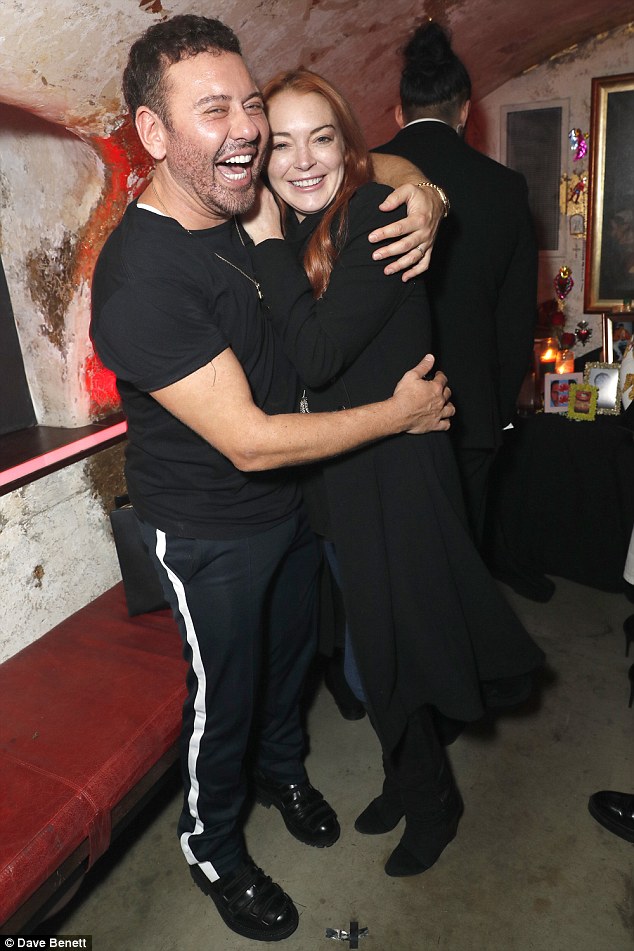 Cuddles: Lindsay Lohan was among the A-list turnout at the fashion bash 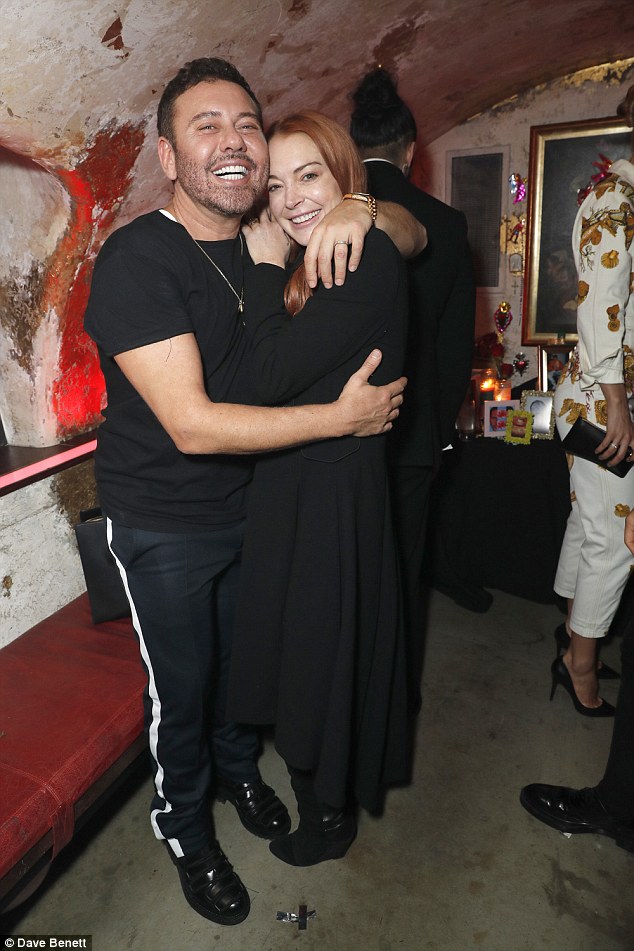 Well hello! The actress was delighted to be celebrating her friend’s birthday

The supermodel revealed to the paper that she never used to be conscious of what she ate in her youth, but is amazed by how her detox has affected both her health and skin.

She confessed: ‘I’ve really noticed an improvement since I’ve been more ‘on it’ with food – like eating salads and all that stuff – I never used to really eat salads. And now I’m like, juicing!’

Having always despised exercise, the beauty also finally made the decision to join a gym, and admitted she’s ‘got quite into it’, against all odds. 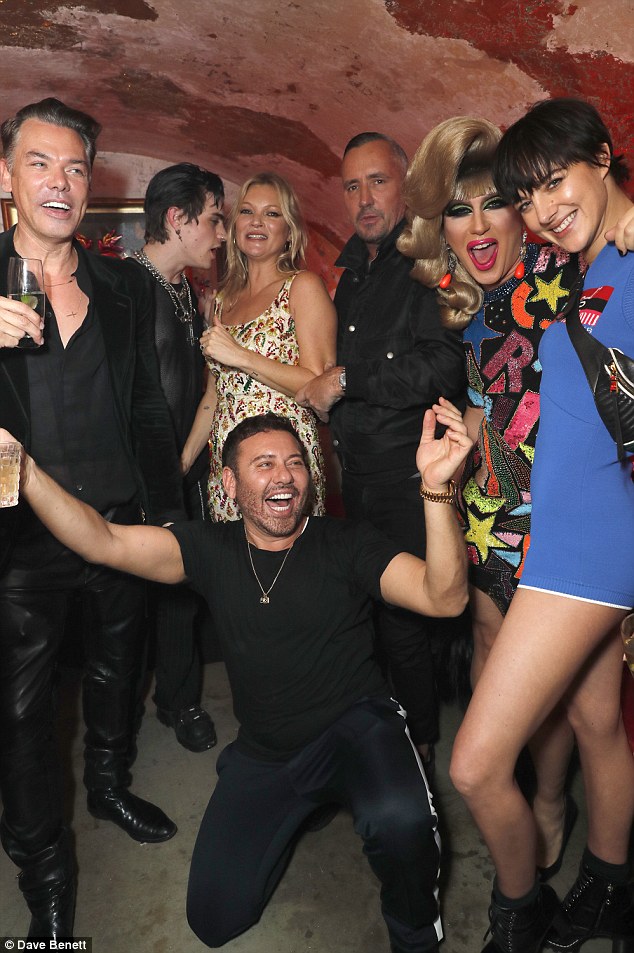 Party time: Kate was the centre of attention for guests including Fat Tony, Jodie Harsh and Eliza Cummings

‘I’ve never been a gym bunny or anything like that,’ she said. ‘I was always, like, ‘UGH’, it made me feel ill, but now I’ve actually started working out, I’m really quite into it.’

Revealing she even lost weight around her middle in less than two weeks, she added: ‘I worked out for an hour every consecutive day for a couple of weeks and it was enough that I really started to see the benefits, which I’d never really done before.’

It is not the first time Kate has discussed her detox, having endorsed a self-help book that advises readers to ‘get to bed at 10:30’ and cut down on alcohol last month. 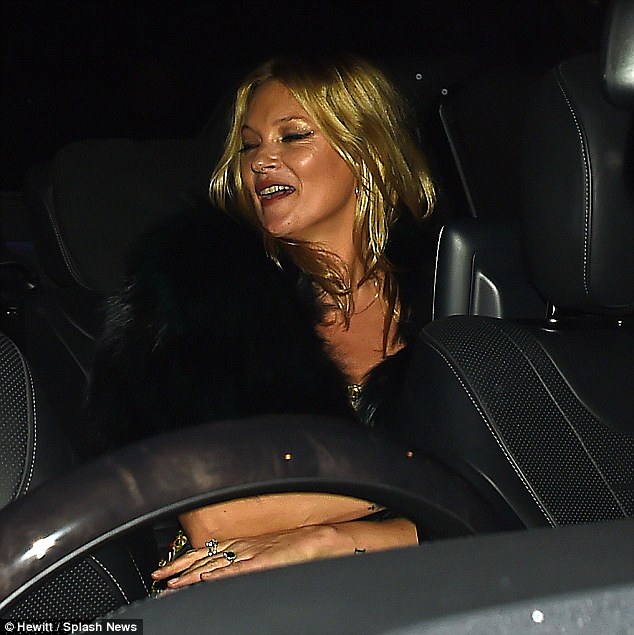 Heading home: Kate was still laughing as she entertained friends after the party 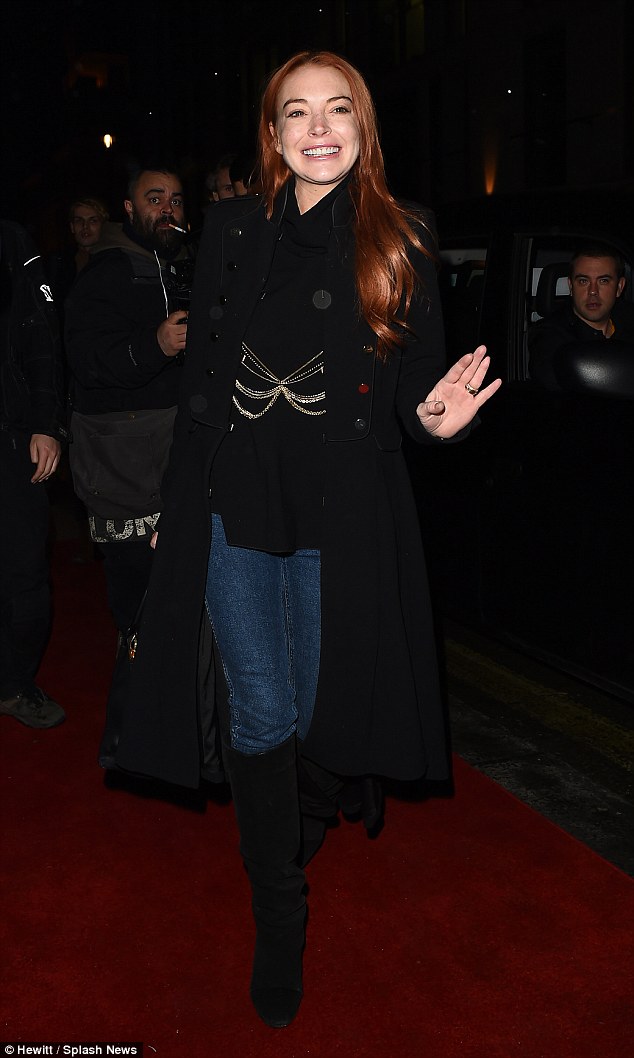 Give us a wave: On her arrival, Lindsay looked stylish in boots and blue jeans

Flame-haired beauty: She looked casual, with a touch of glamour 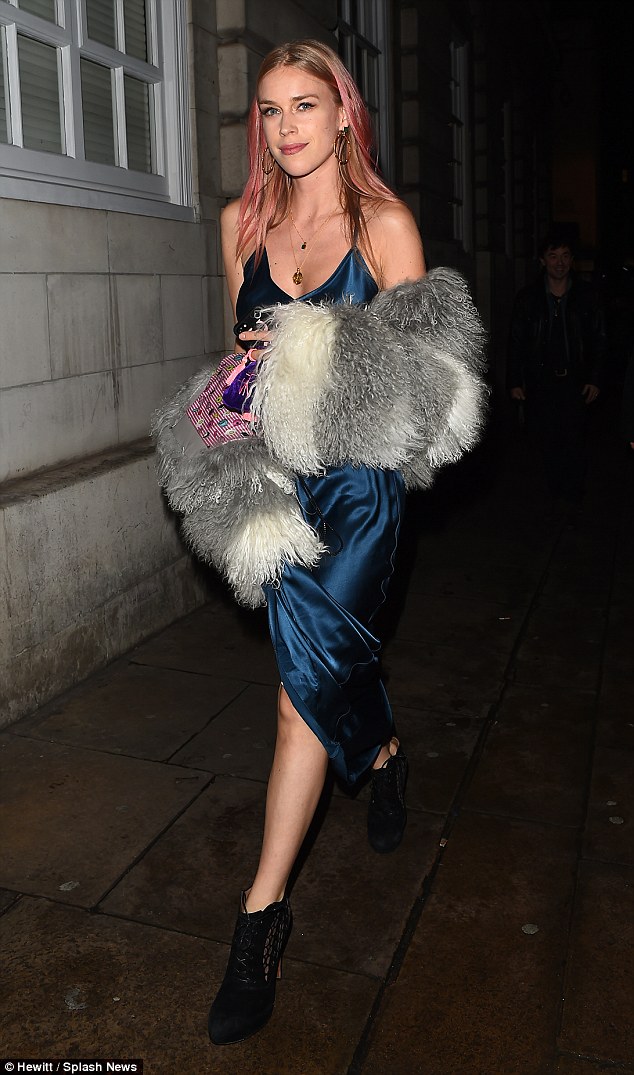 Glamorous: Mary Chateris was glamorous in a sleek blue gown for her entrance

On the cover of the manual – Self Care For The Real World by Nadia Narain and Katia Narain Phillips – Kate gushes: ‘I want to give this book to everyone that I know!’

Her recommendation may come as a surprise to fans, as former party girl Kate famously broke all the rules featured within its pages in her youth.

At the height of her career – and rebellious partying ways – in the 1990s, Kate was earning around £3m a year, and hit the headlines numerous times with her scandalous late night outings. 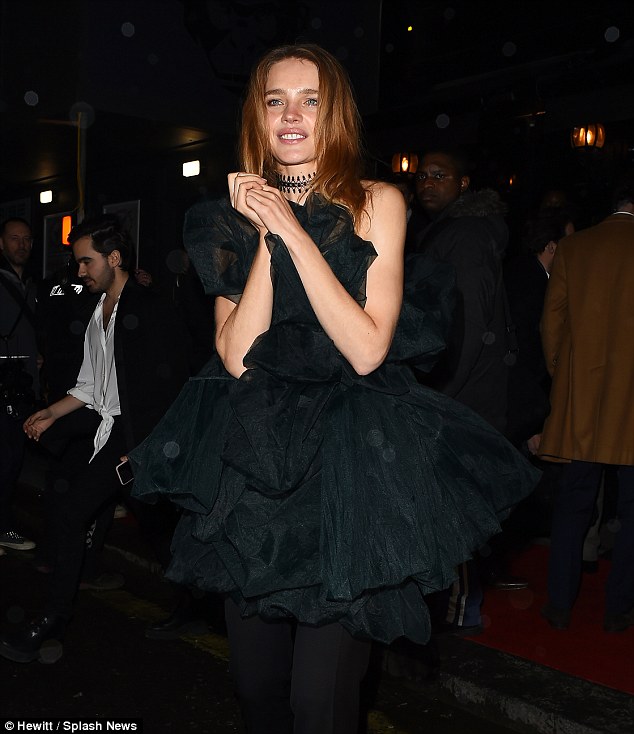 Party time! Natalia Vodianova was one of the models to join the guestlist 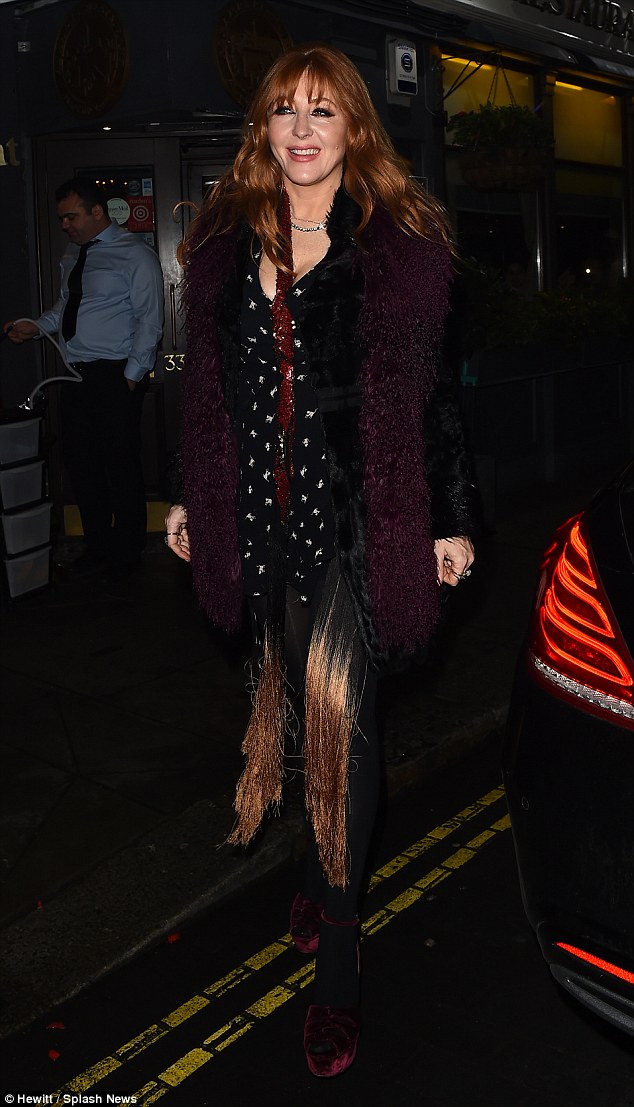 Friends in fashion Charlotte Tilbury supported her pal on his birthday 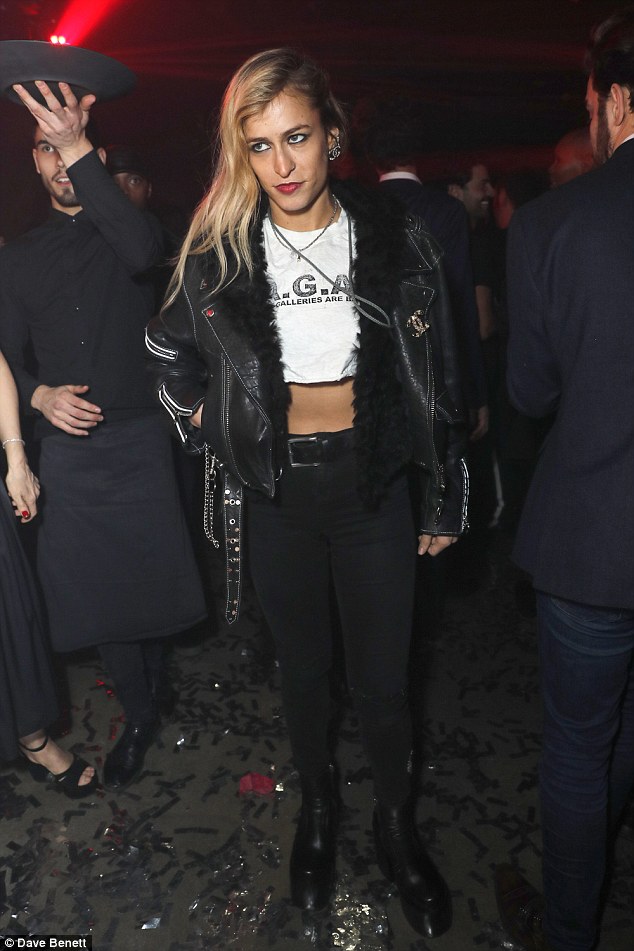 Kate endured a stint in rehab in 1998 and suffered an infamous photo scandal in 2005, which allegedly showed her snorting cocaine.

Kate is still one of the top models in the fashion industry, despite being discovered at the age of 14.

She most recently appeared in the new Stuart Weitzman campaign with Gigi Hadid, 22, and walked on the runway for Louis Vuitton at Paris Fashion Week Men’s last month.

She also recently rang in her 43rd birthday with boyfriend Count Nikolai von Bismarck, who she has been dating since 2015. 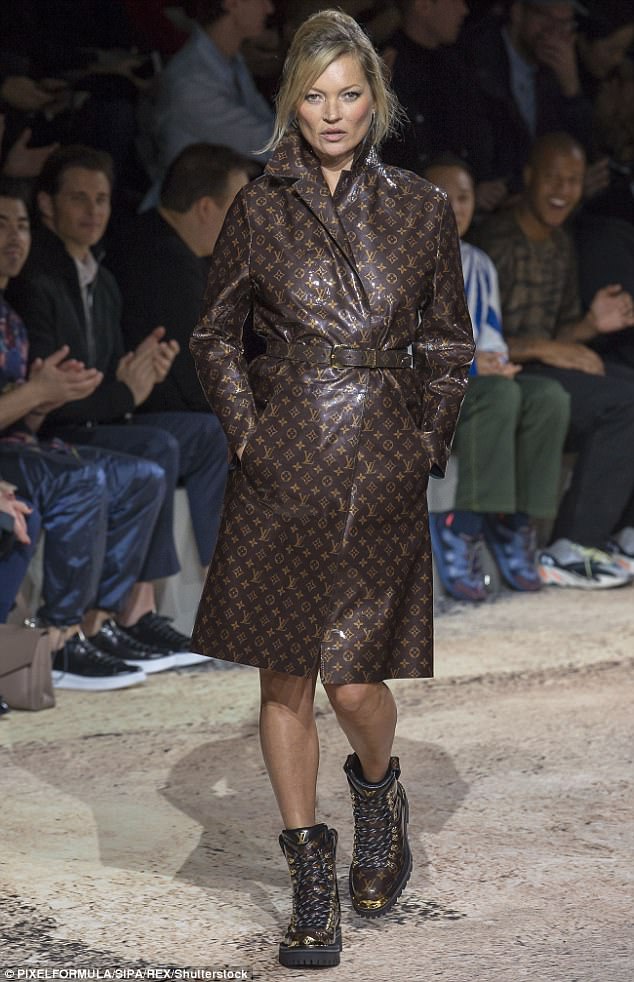 Star of the show: However it seems her new healthy lifestyle is paying off, as Kate is still one of the top models in the industry – and even walked for Louis Vuitton in Paris last month (above) 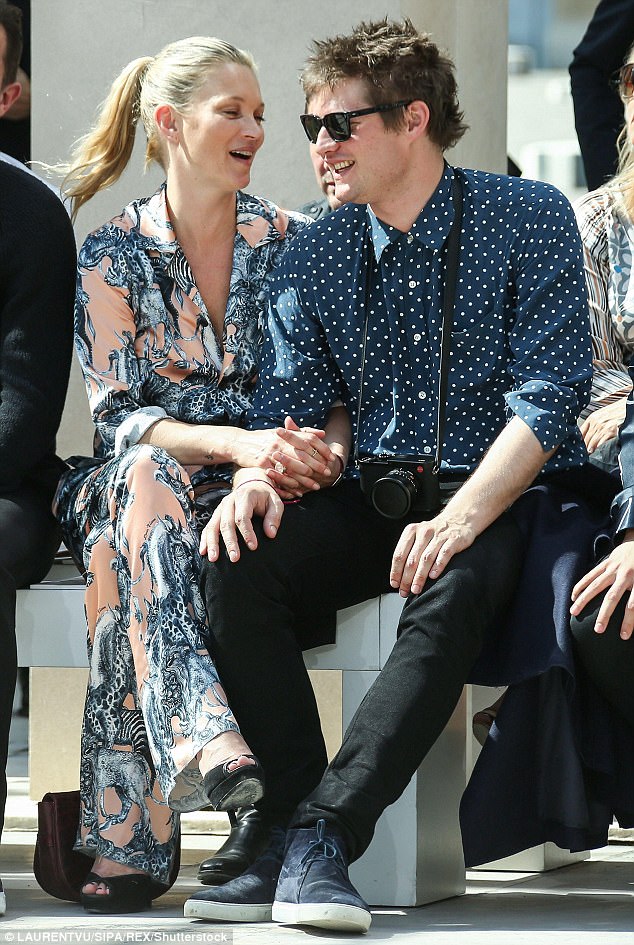 Still going strong: She also recently rang in her 43rd birthday with boyfriend Count Nikolai von Bismarck, who she has been dating since 2015 (pictured in 2016)