Kate Moss and Co STILL refuse to speak up over Sir Philip Green furore – but why, asks LIZ JONES

When Philip Green was outed in Parliament as being the businessman behind an injunction to quash a story about alleged sexual and racist bullying, I have to confess I felt a certain sense of schadenfreude.

He made my life while a fashion editor a misery for 13 years. I was eventually barred from his prestigious Topshop Unique catwalk show, made to peer through railings from the outside, because I’d dared to challenge him.

I would see endless photos of him standing next to every powerful woman in the fashion industry, a huge grin on that mahogany face, and wonder: ‘Why can they not see it? Why are they not just remaining silent, why are they in bed with a brute?’

For whatever the truth about allegations of sexual harassment and racism – both of which he vehemently denies – there was never any shadow of a doubt he was a bully.

Sir Philip Green could be loyal. After Kate Moss was pictured snorting cocaine, Green sent out a clear message of support by seating her next to him at the Topshop Unique catwalk show in September 2006. He called me afterwards to confirm he’d hired her. ‘What if she takes cocaine again?’ I asked. ‘Well, if she does it again, I will let her go. She deserves a chance’

And not a skinny finger was lifted by anyone in the industry because he’s not just a shop keeper: for years he virtually ran British fashion. He injected huge sums of money into supporting emerging British designers. He sponsored a glitzy venue every season at London Fashion Week, laying on a free buffet and bar – it’s the only time anyone got fed.

His umbrella brand, Arcadia, has an annual advertising spend in the UK fashion press in the tens of millions. So the British fashion industry’s deafening silence since Thursday has been shocking – but entirely predictable. For as one glossy magazine editor tells me: ‘We all feed from the same trough.’

On Friday a former Topshop buyer, whom I first met in Bangladesh at a garment factory after she’d left his brand, called me to say she’d read an article in the Telegraph by a socialite who says she was fondled by Green at a party, while he chatted to her boyfriend. He’d put his hand up the back of her skirt – apparently getting a kick from both her boyfriend’s ignorance and her powerlessness to stop him.

‘Why did no one challenge him sooner,’ the buyer asked me. ‘Who’s to say a hand cupping a buttock is worse than being shouted at while you’re on the phone to a supplier in the Far East – yelling that you must make them drop their prices.

‘It got to the point I felt sick every Sunday night at the prospect of going to work. I had to leave. I think bullying can be worse than sexual stuff – it felt like pure hatred. He will stamp on you, like a snail.’ 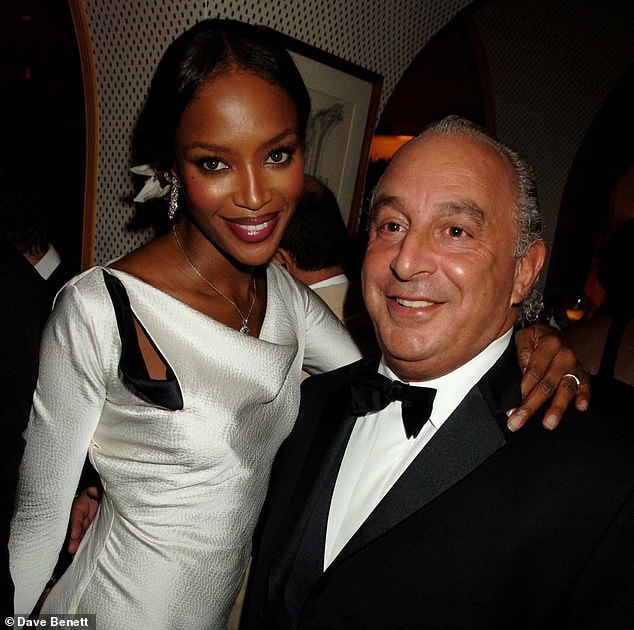 Green with Naomi Campbell in October 2007. His umbrella brand, Arcadia, has an annual advertising spend in the UK fashion press in the tens of millions. So the British fashion industry’s deafening silence since Thursday has been shocking – but entirely predictable

Philip Green has bullied me since I conducted my first interview with him for the London Evening Standard, in November 2005. I met him in his boardroom at Arcadia HQ on Berners Street with its view of the London Eye before his chauffeur and bodyguard, Kevin, drove us to the Royal Academy, where his brands – Topshop, Evans, Miss Selfridge, Dorothy Perkins, Burton – were showing their wares to the press.

In the limo, he chain-smoked Philip Morris – ‘I have to have one pleasure in life’ – and slagged off every designer store we passed. ‘Stella McCartney? Never made two bob.’ When I asked about his employees, his reputation as a rottweiler, he told me: ‘I give a straight yes or no. They are empowered.’

He introduced me to his wife, Tina (who owns 92 per cent of Arcadia shares) and 14-year-old daughter, Chloe. When I later wrote that Chloe was wearing mukluk boots, which are made of fur, something banned in his stores, he complained to my editor, a soignee woman who that morning had no need of a blow dry.

But he could be loyal. After Kate Moss was pictured snorting cocaine, Green sent out a clear message of support by seating her next to him at the Topshop Unique catwalk show in September 2006. He called me afterwards to confirm he’d hired her. ‘What if she takes cocaine again?’ I asked. ‘What message does that send out to young customers?’

‘Well, if she does it again, I will let her go. She deserves a chance.’

At the launch of Moss’s first collection for Topshop, in May 2007, I wrote in the Daily Mail, where I’d become fashion editor, that he worked his way along the queue of young girls snaking along New Oxford Street to check they each knew their PIN – so they could buy his products. He called me, swearing, and told me I was ‘anti-Semitic’. ‘No,’ I said. ‘These girls don’t have much money. You were grooming them.’

As, over the years, I refused to fawn over him, his mood swung between extremes. After I wrote a rave review of one collection, he sent me a gorgeous olive greatcoat, still warm from the model who’d worn it. Later, after a bad review, his right-hand woman called me. ‘He wants his coat back.’

The last time I spoke to Green was at an Evans show in the autumn of 2014. He’d sat me front row of this plus-size show (now that’s a laugh; in Oliver Shah’s biography, he is reported to have told a female buyer: ‘You’re absolutely f****** useless. I should throw you out the window but you’re so fat you’d probably bounce back in again’), as I’d been at the vanguard of a campaign to give big women the fashion they deserve.

Afterwards he asked if we could pose together for the paparazzi. I said no. Unlike every female glossy editor in the land, I felt to do so would betray my readers. I couldn’t bring myself to stand next to him, gurning. 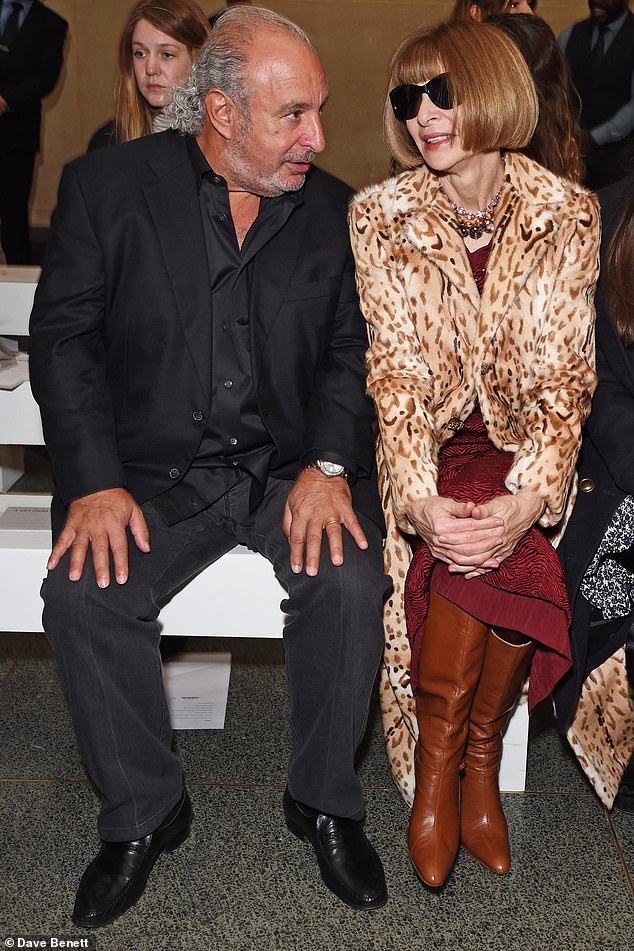 I can’t help but remember the image, at his show inside the old Eurostar terminal in Waterloo, of American Vogue editor Anna Wintour, looking like the cat who got the zero fat cream because Green had arranged for her own personal escalator on which to glide in, and glide out (when approached for this story, her silence was deafening). Above, at Tate Britain in 2016

Everyone in fashion knew he was a tyrant, but it’s unreasonable to expect teenage models and junior employees to stand up to him; you might wonder why anyone would sign a gagging order, but this was a seriously powerful man.

So it was the responsibility of the senior company executives, editors, publishing directors and model agents to be on the side of the women who toil in low-paid jobs in stores and factories and lap up glossy fashion magazines.

I can’t help but remember the image, at his show inside the old Eurostar terminal in Waterloo, of American Vogue editor Anna Wintour, looking like the cat who got the zero fat cream because Green had arranged for her own personal escalator on which to glide in, and glide out (when approached for this story, her silence was deafening).

I can’t help but think back to the meetings of magazine editors and London Fashion Week bigwigs in the boardroom of Vogue House, where not one woman had the courage to say, ‘What can we do about Philip Green?’

Or, later, as the BHS scandal erupted and the pension hole gaped, why even then did not one of them take him to task over the number of employees his greed was condemning to penury?

My guess? They were too busy counting his advertising spend, and nursing their 40 per cent Topshop discount card.

Even today, when I ask Caroline Rush CBE, chief executive of the British Fashion Council, who will have had more dealings with Green than most, if she ever took him to task, I’m told her PA is away on honeymoon. I email the British Fashion Council press office and ask them to call her on her mobile. How bad is this for British fashion? Will he show next season? She doesn’t ring back. It is her job to reply. This is what she is paid to do.

Or Baroness Karren Brady CBE (don’t you love all these titles?), who has been vocal about fighting sexism in business, and has been chair of Arcadia’s parent company, Taveta, for eight years.

I ask if she knew of allegations that Green gave female staff ‘lingering hugs’ and asked if they wanted their ‘bottoms slapped’ or, indeed, had paid substantial sums to settle complaints. Only her PA gets back to me: ‘Karren is away until next week.’ But this is important! She’s got a phone, hasn’t she? I visit her glorious villa next to Harrods; no one answers the door.

How about Naomi Campbell, who publicly attacked former Vogue editor Alexandra Shulman – now a Mail on Sunday columnist – for having too many white staff? Did Naomi ever find Green racist? No reply.

How about Kate Moss? Would she like to offer her support to him, given he’d been so loyal to her in the past? She was ‘about to get on a plane’, apparently.

Come on, then, Natalie Massenet, Net-a-Porter founder and one-time chair of the British Fashion Council? She can’t be scared of anyone. She’s a bleeding Dame! I get an email. ‘Natalie is going to reach out to you.’ I’m still waiting.

Isn’t it telling that the only powerful person in British fashion I can find who is willing to speak out about Green is a man – although he doesn’t want me to use his name.

No longer employed by Topshop, he tells me: ‘He’s outrageous. This is all typical of him. Doing it in the first place is unacceptable, covering it up is ridiculous.’

Is he a sexual predator, a racist? ‘The real issue is this: he will never be aware that he has done anything wrong. He just doesn’t get it, he will never change.’

Is that why he left Green’s company? ‘I left because I didn’t like the way he treated people. My mum told me that we are all equal, and that we should treat everyone with respect. He didn’t treat anyone with respect.’

I will leave the last word to a young woman braver than all the highly paid fashion mavens named above.

Annabelle is the daughter of Tony Brown, owner of Beales department store in Bournemouth, once retail director at BHS under Green.

She is 21 years old. ‘I’m honestly glad the world is seeing what a vile, slimy man Philip Green is.

‘I’ve known him since I was a young child and I’ve seen first-hand how he can be. Awful human all round, really.’