Stars gathered to pay their final respects to fashion photographer Peter Lindbergh at his funeral today in Paris.

Kate Moss, Bella and Gigi Hadid and Naomi Campbell were among the famous faces who attended the mournful occasion at the Saint-Sulpice Church in the French capital.

Lindbergh passed away earlier this month at the age of 74.

The esteemed German-born artist shot to fame shooting supermodels in the 90s and his most recent project saw him work with the Duchess of Sussex on her Force for Change edition of Vogue magazine.

The renowned German fashion photographer also snapped Meghan for the October 2017 cover of Vanity Fair, when the Suits star opened up about her romance with Prince Harry for the first time. 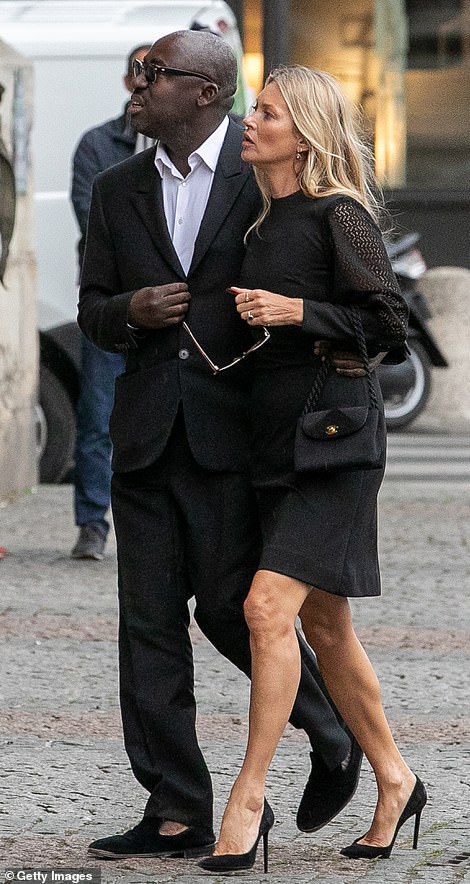 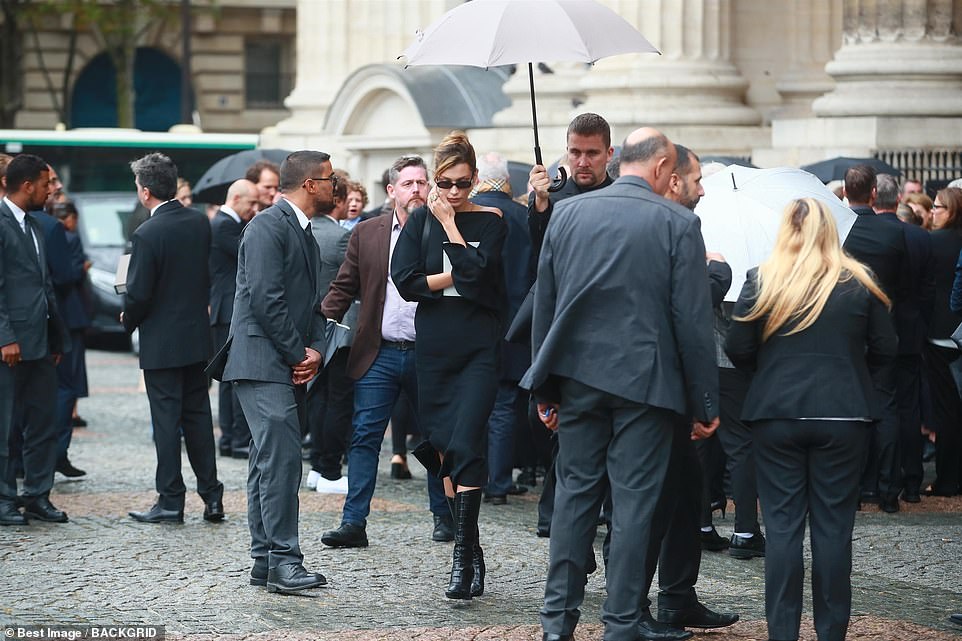 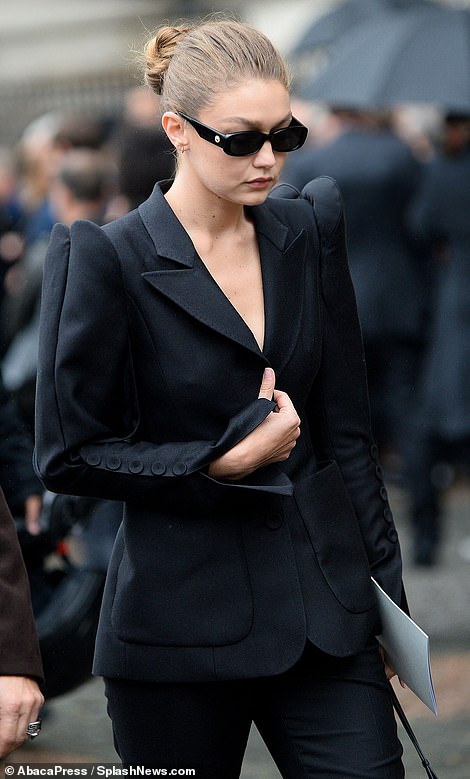 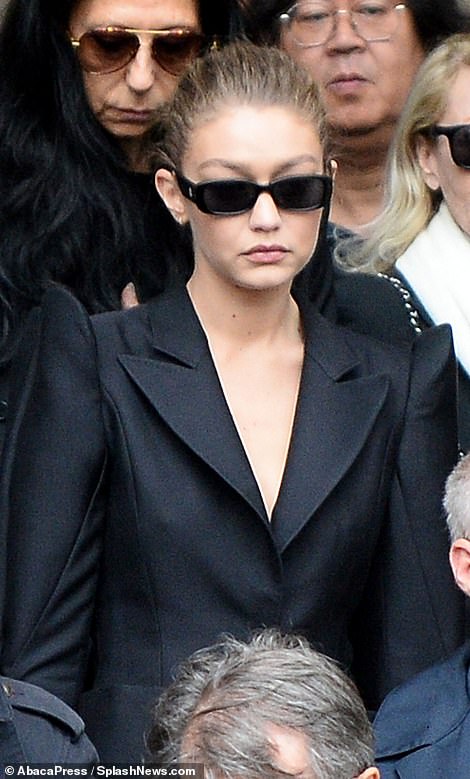 Bella was joined by her sister Gigi Hadid, who also sported dark sunglasses which she teamed with a stylish plunging blazer with striking shoulder detail 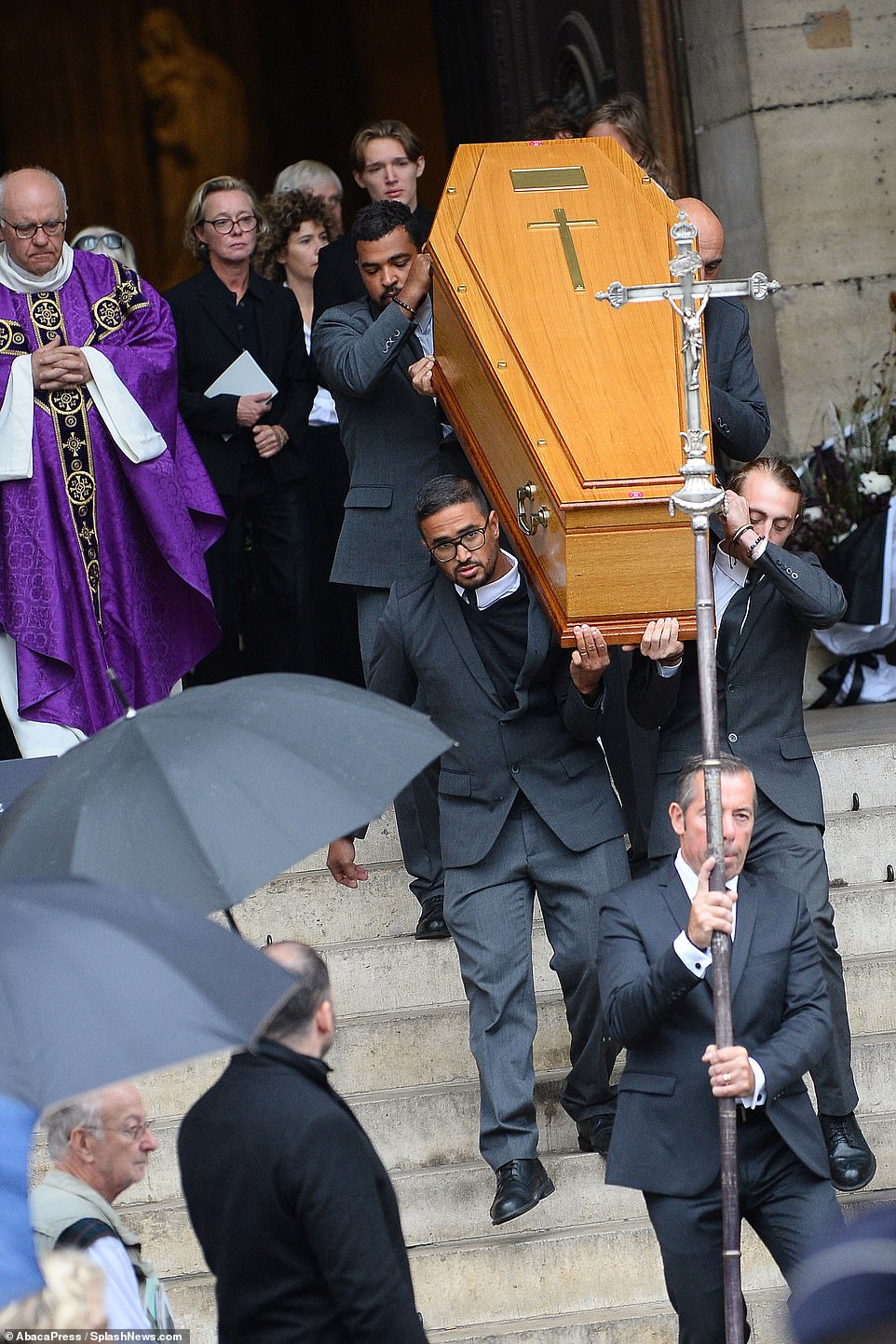 Peter Lindbergh’s coffin pictured being carried out of the church as the guests, which included many celebrities, left following the service 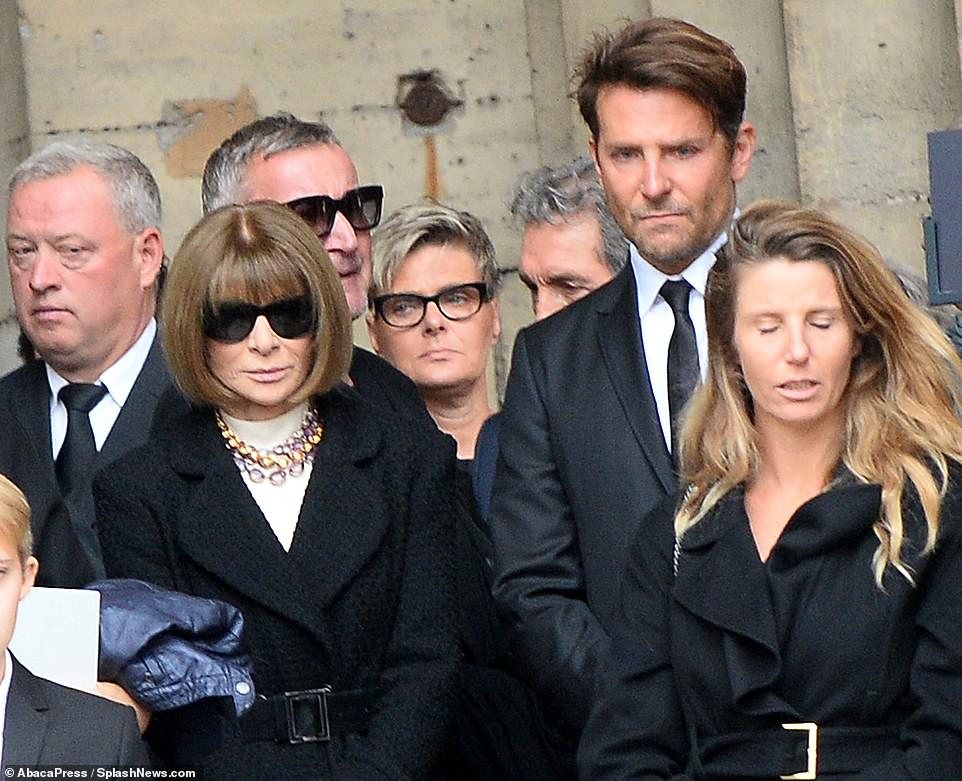 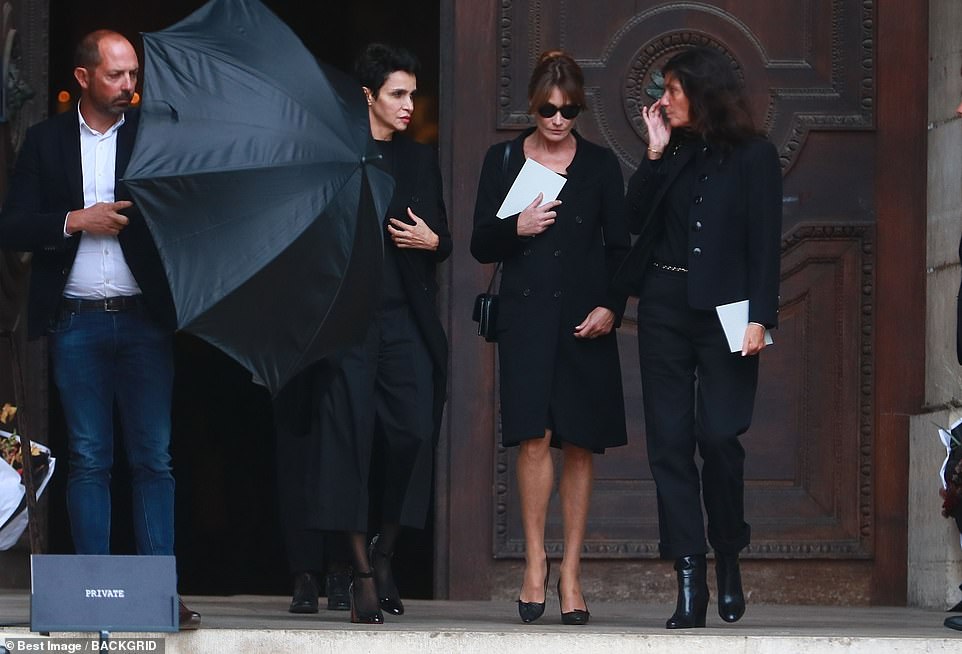 Farida Khelfa, Carla Bruni-Sarkozy and Emmanuelle Alt leave the Saint-Sulpice Church after what looked like an emotional service 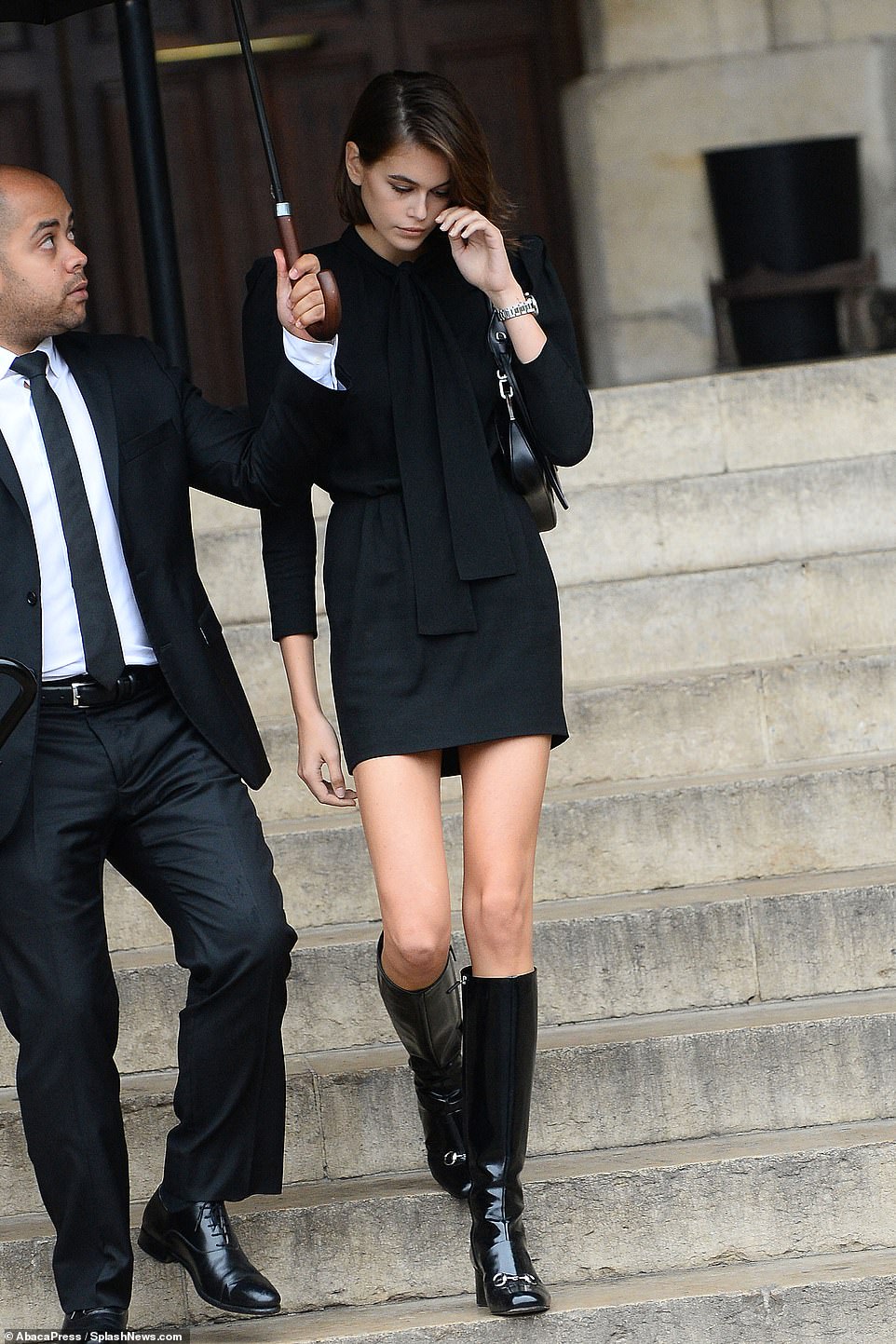 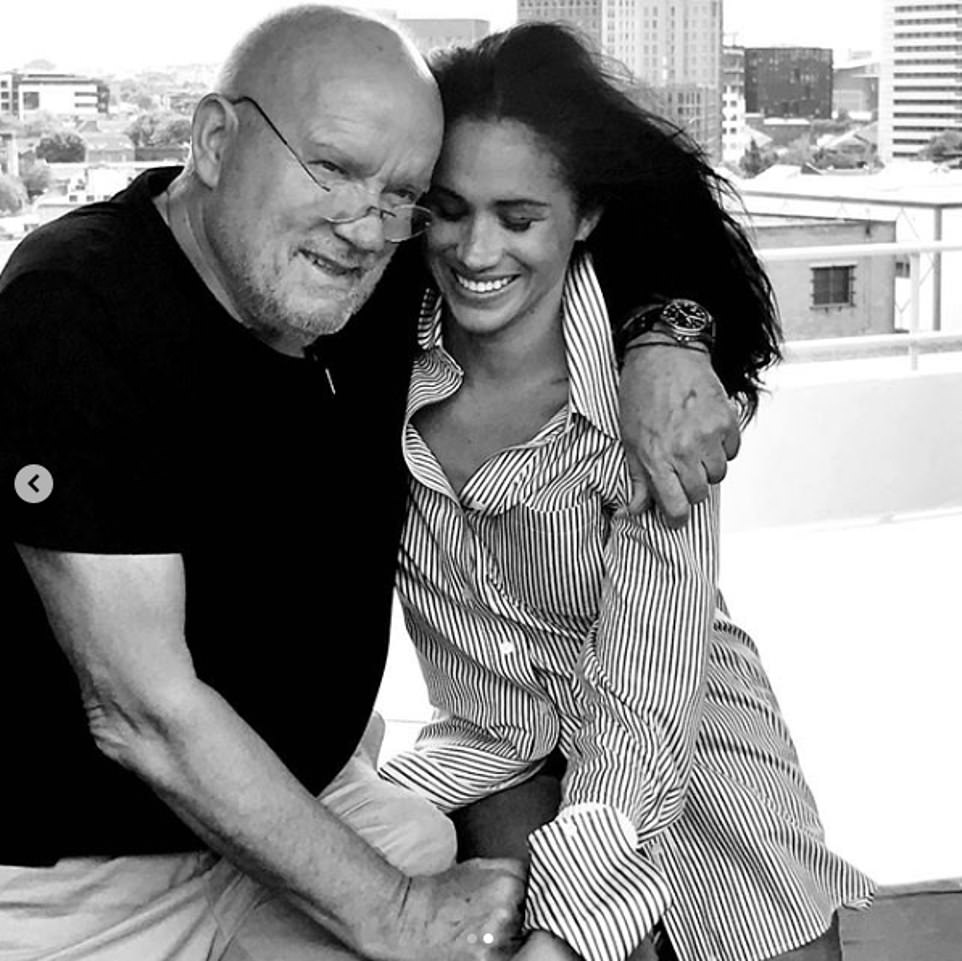 Lindbergh made his name with his distinctive black-and-white style and was credited with the rise of the supermodel in the eighties and nineties.

The announcement of his death on September 3 was published alongside a trademark monochrome image by Lindbergh on the photographer’s Instagram account.

He is survived by his wife Petra, his first wife Astrid, his four sons Benjamin, Jérémy, Simon, Joseph and seven grandchildren.

Celebrities including actresses Julianne Moore and Milla Jovovich, models Kaia Gerber and Lara Stone, ex-supermodel and former First Lady of France Carla Bruni-Sarkozy and Paris Vogue Editor-in-Chief Emmanuelle Alt packed out the church in Paris today, for what looked like an emotional service. 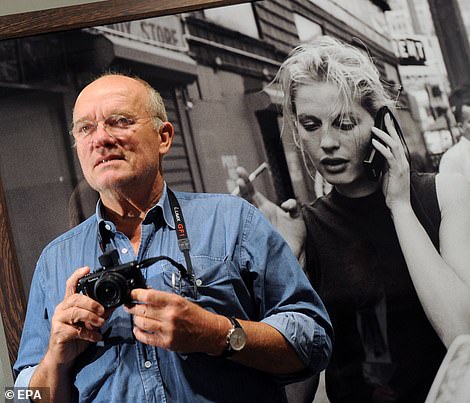 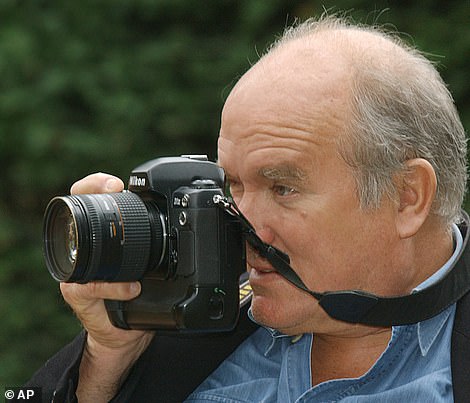 Peter Lindbergh, pictured left at an exhibition of his work in 2010 in Berlin. The talented photographer was born in Poland, but spent his formative years in Duisburg, Germany 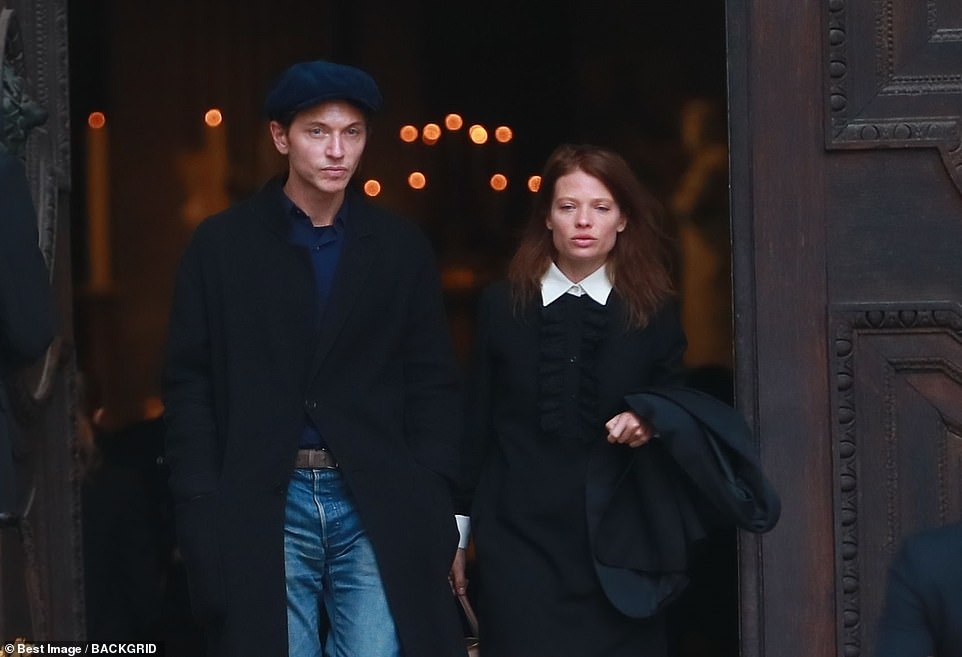 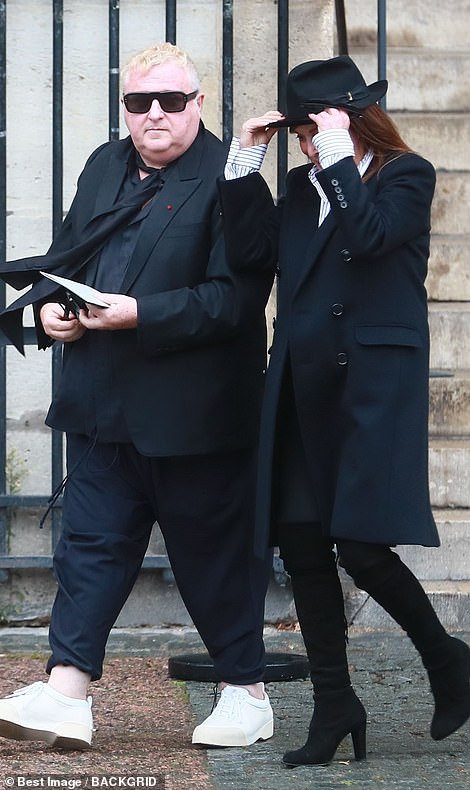 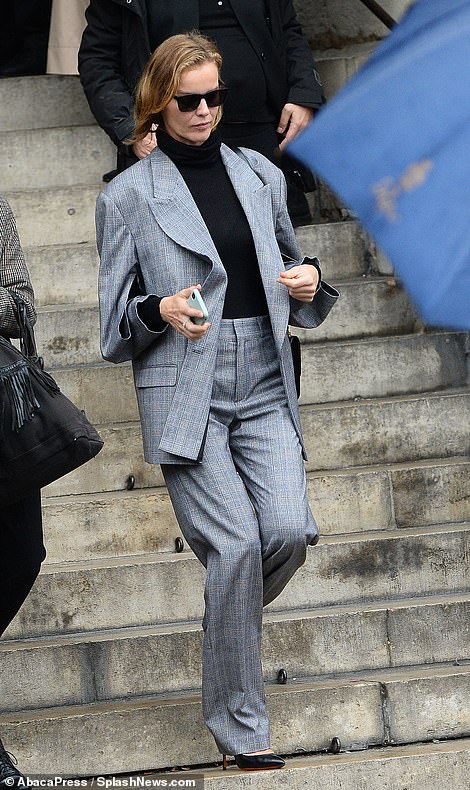 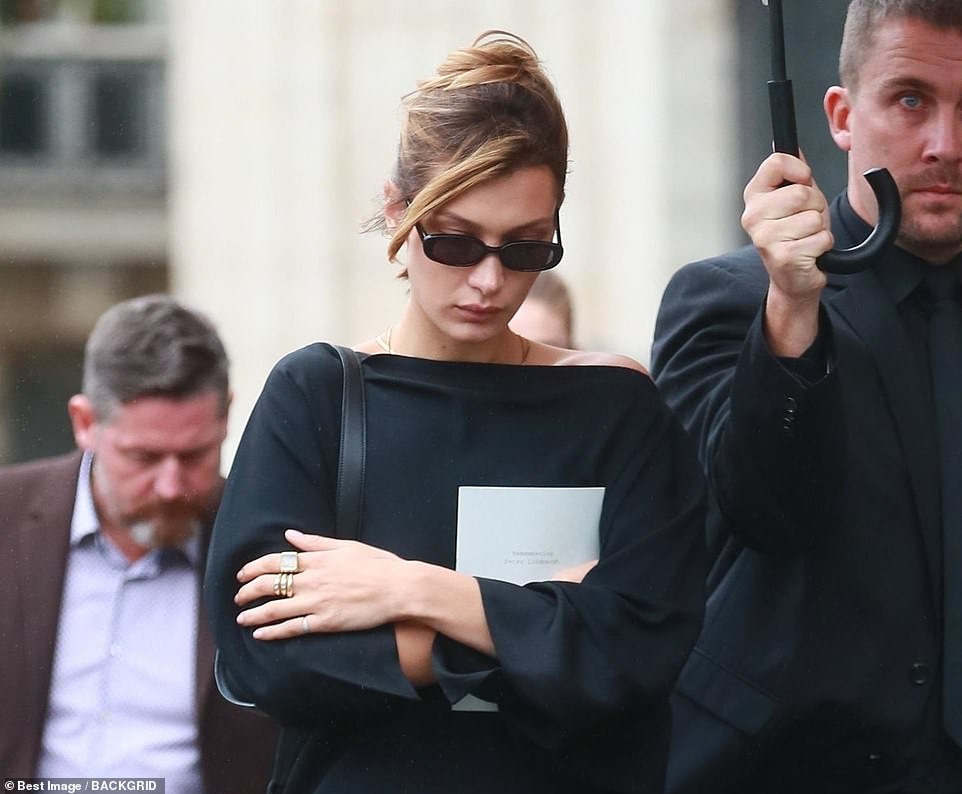 Kate Moss put on a sombre display, donning a large pair of sunglasses and a smart knee-length black dress with lace detail sleeves 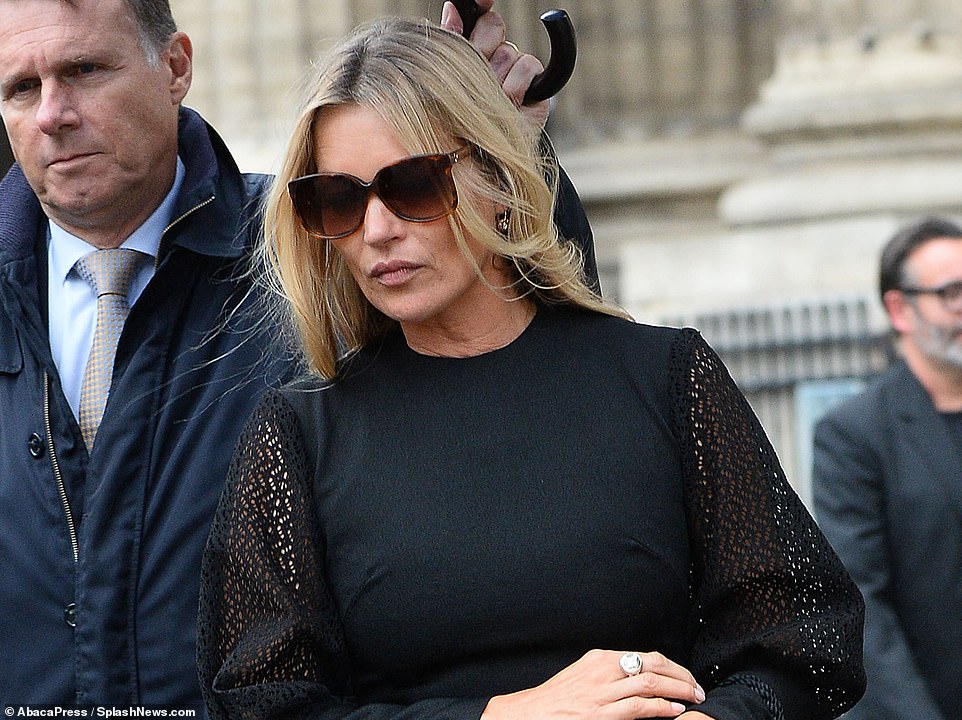 The supermodel had worked numerous times with the German photographer, who enjoyed an illustrious career

Born on 23rd November 1944 in Leszno, Poland, a city then annexed by Germany, Lindbergh spent his formative years in the town of Duisburg.

The photographer enjoyed an illustrious career, and shot to fame in the nineties when he was behind the lens when some of the world’s most famous supermodels walked the runway.

After his passing, British Vogue Editor-in-Chief Edward Enninful wrote on Twitter: ‘Peter Lindbergh was both a visionary photographer and a dear friend. His ability to see real beauty in people, and the world, was ceaseless, and will live on through the images he created. He will be missed by everyone who knew him, worked with him or loved one of his pictures.’

After news of his death broke, Prince Harry and Meghan Markle’s SussexRoyal Instagram account was among the first to pay tribute to the talented photographer, saying ‘he will be deeply missed’.

Meghan personally chose Lindbergh to capture the 15 women she featured on the Vogue cover – including Selma Hayek and NZ Prime Minister Jacinda Ardern.

The Duchess chose to promote ‘trailblazing’ women who have campaigned for body positivity, transgender rights and climate change when she took control of the British September edition of the fashion magazine. 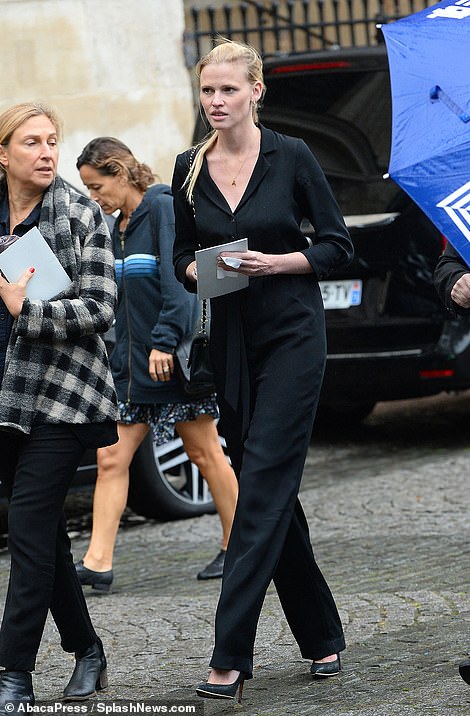 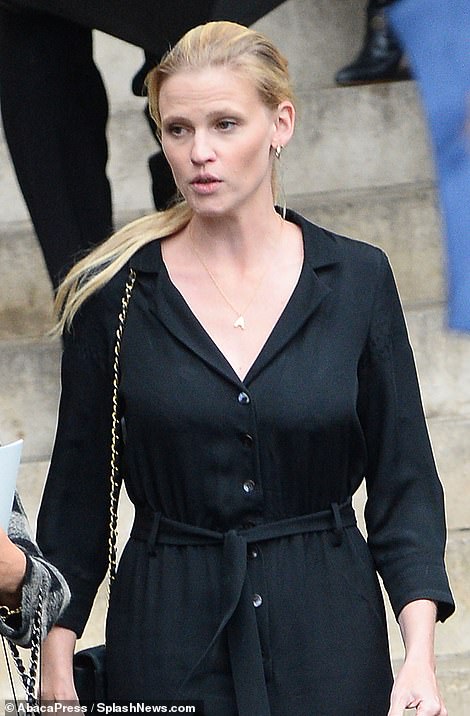 David Walliams’ ex Lara Stone also attended the funeral to pay her respects, sporting a chic black suit and sweeping her hair back in a ponytail 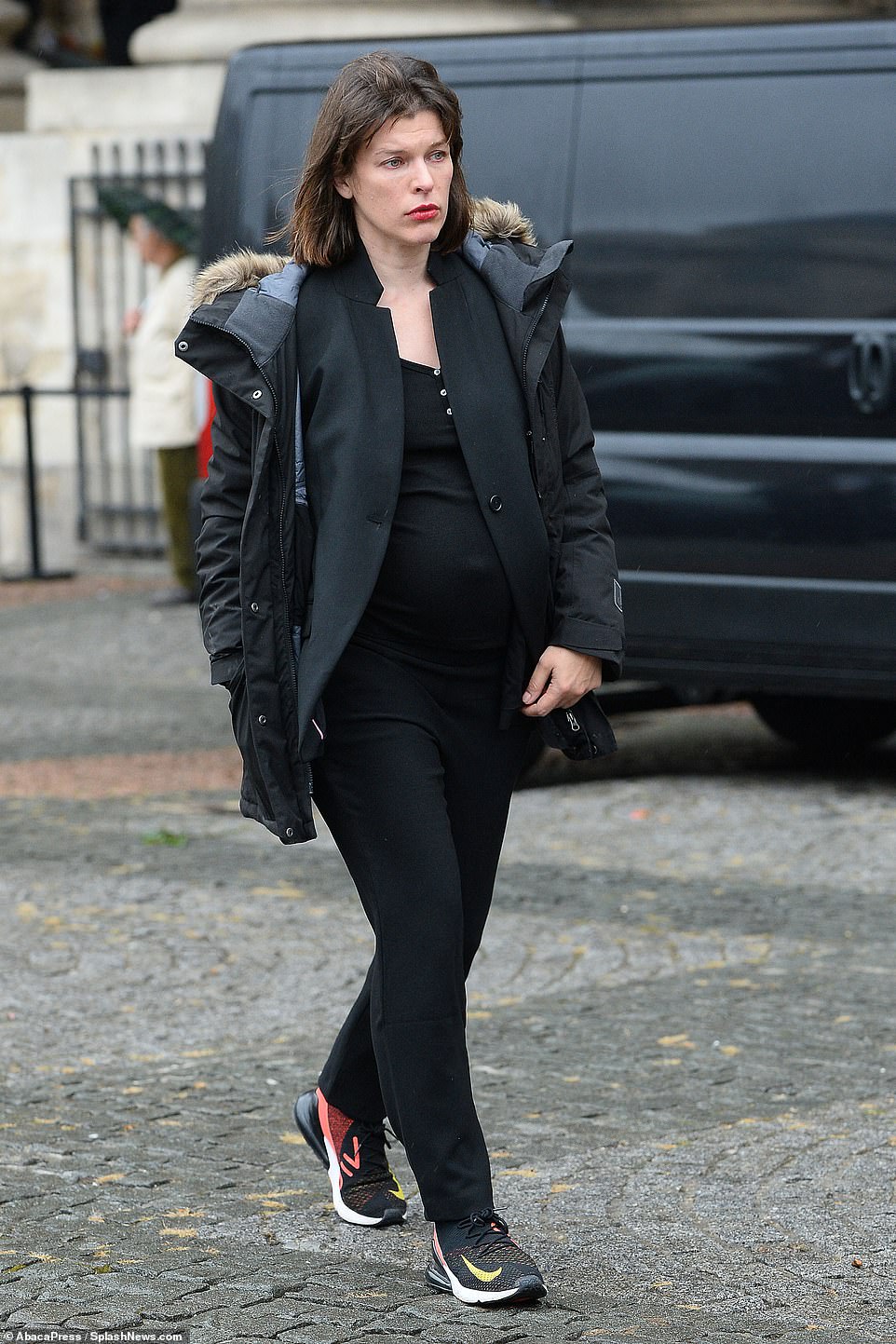 Pregnant actress Milla Jovovich cut a forlorn figure as she attended the funeral, dressing down for the sad occasion in trainers and an anorak 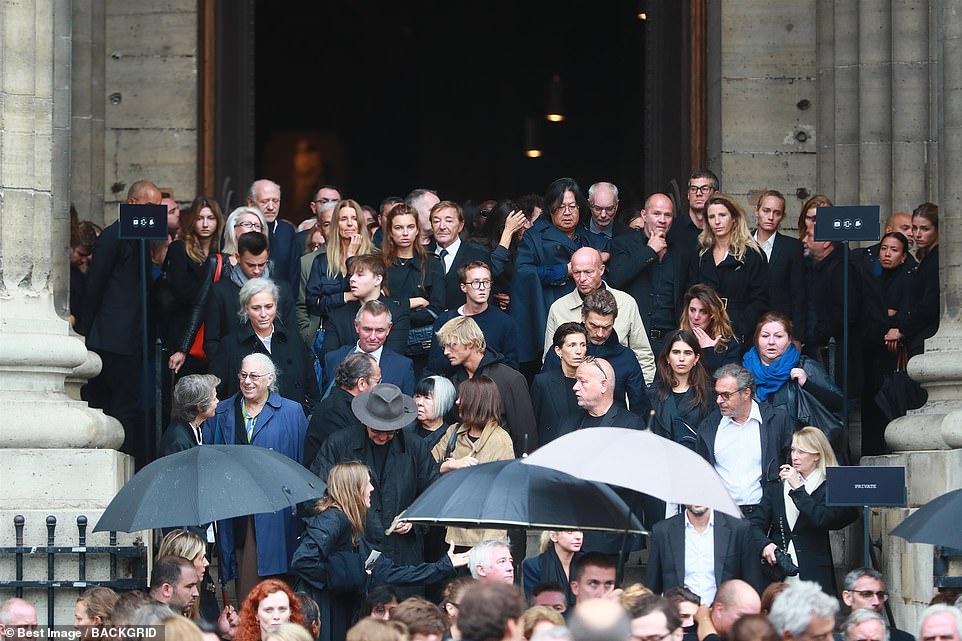 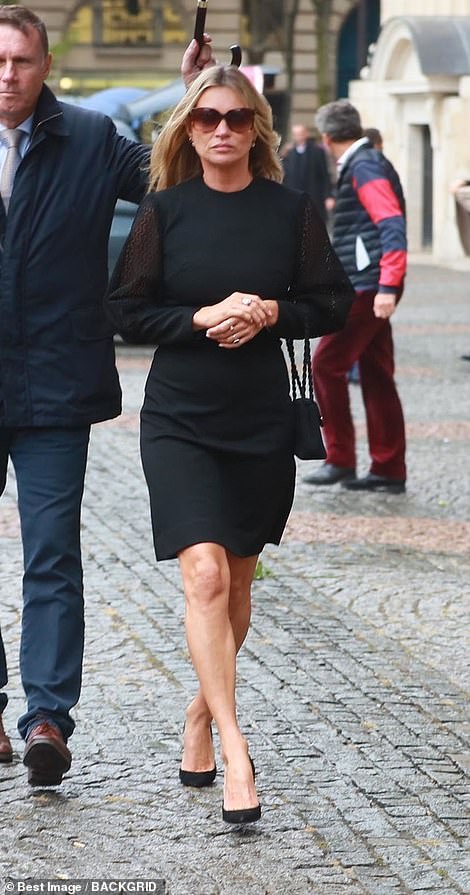 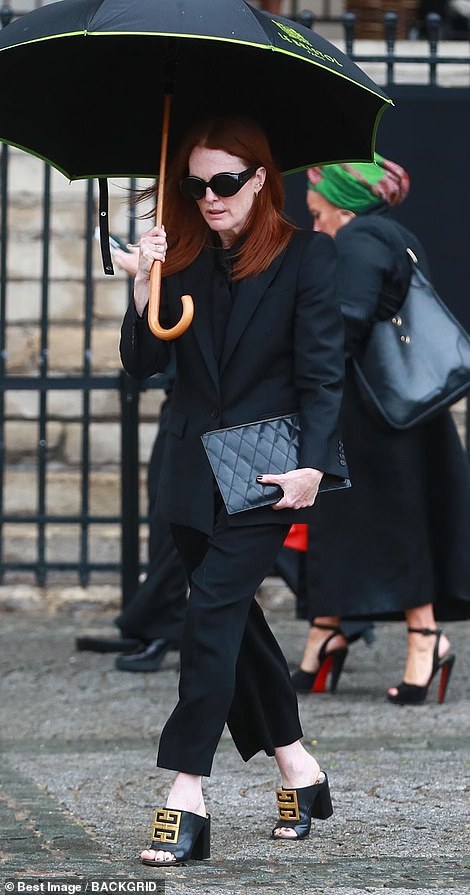 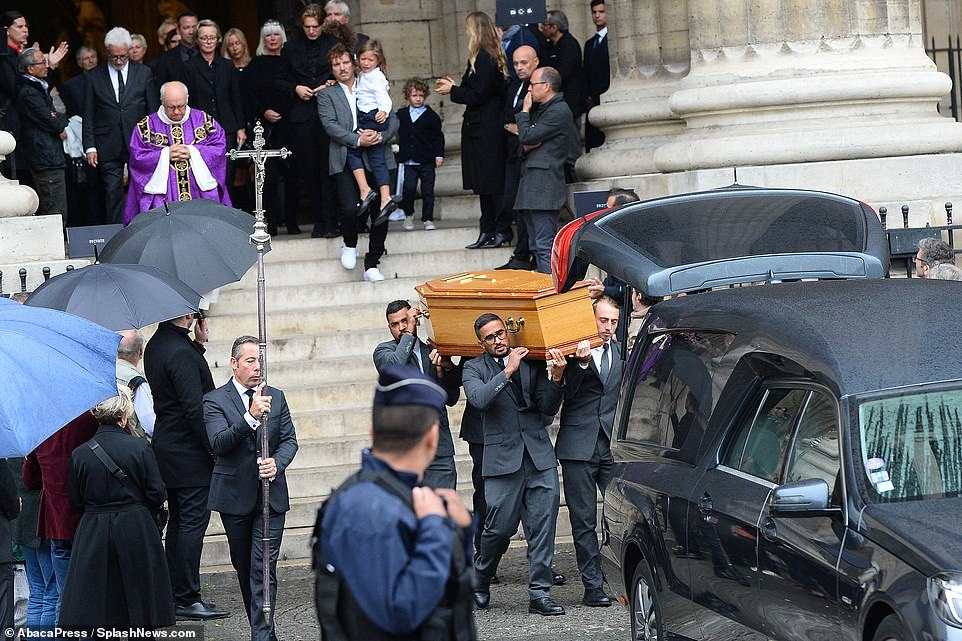 Friends and family of Peter Lindbergh all gathered today to pay their final respects to the 74-year-old, who passed away on September 3 this year 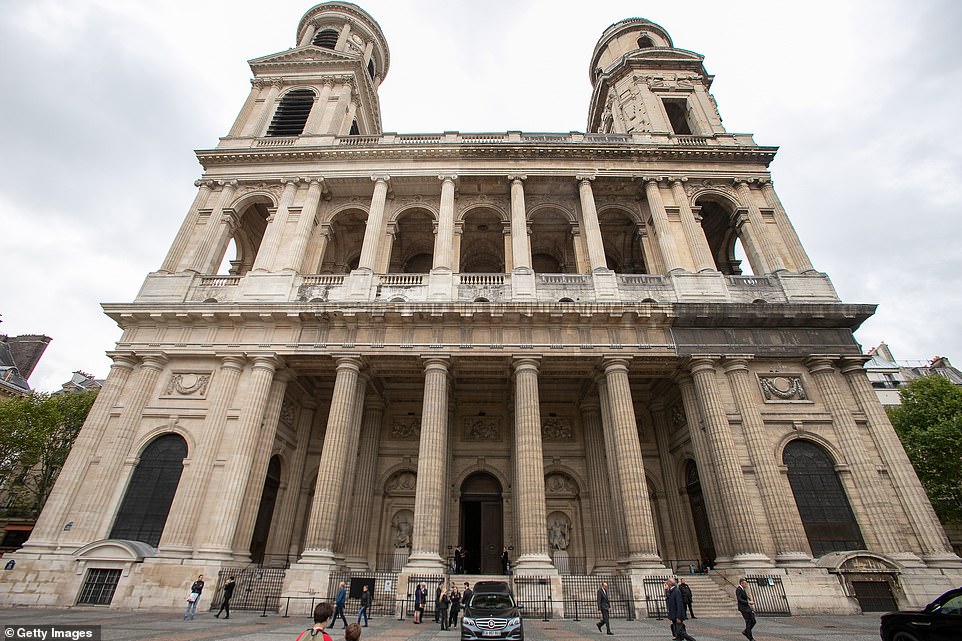 A general view at Eglise Saint-Sulpice in Paris, where the funeral of photographer Peter Lindbergh took place earlier today

The photographer who captured portraits for Meghan Markle’s edition of Vogue has revealed the royal phoned him with ‘clear instructions’ for the magazine’s 15 cover shots.

Peter Lindbergh said Meghan phoned him on the morning of a photoshoot in New York, telling Vogue: ‘My instructions from the Duchess were clear: ‘I want to see freckles!’. Well, that was like running through open doors for me. I love freckles.’

A close-up of model Adwoa Aboah on the cover, showing her freckled skin, proves the photographer followed Meghan’s instructions to the letter.

The photographer was personally chosen by the duchess and editor-in-chief Edward Enninful, after he worked with Meghan for her 2016 Vanity Fair cover story, in which she spoke about her romance with Prince Harry for the first time.

Enninful revealed that he and Meghan had ‘exactly the same idea at exactly the same time’ to select the German photographer to help create the cover of the September issue.

The images were shot over three continents and several days in June, with separate shoots happening in New York, Sweden and London.

It was shortly before the New York shoot that Meghan phoned Peter and explicitly told him she wanted to see ‘freckles’ in the photographs.

He also revealed that ‘natural’ was a word that repeatedly came up in cover conversations, saying: ‘I hate retouching, I hate make-up. I always say, ‘Take the make-up off!’