Kate Ritchie appears upset as she cups her face with hands

Kate Ritchie has even joked in the past that divorce rumours about her means her former Home and Away co-star Bec Cartwright ‘gets the week off’ from similar reports.

And earlier this month, Kate Richie, 39, was seen looking visibly upset while shopping with a friend without her wedding ring.

Trouble in Paradise? Photographs have emerged of former Home And Away actress Kate Ritchie, 37, looking visibly upset without her wedding band on. The mother-of-one has been forced to consistently deny rumours of a marriage split from husband, Stuart Webb

Spotted at a Sydney shopping centre, the star of the Kate, Tim and Marty Show appeared to have just finished exercising with a gal pal, with Kate looking decidedly downcast while riding the escalator.

At times, Kate’s friend appeared to be listening intently to the former soap star with the pair seemingly in deep conversation.

Meanwhile, usually upbeat Kate appeared to cup her face in her hands while staring in a distracted manner into the distance. 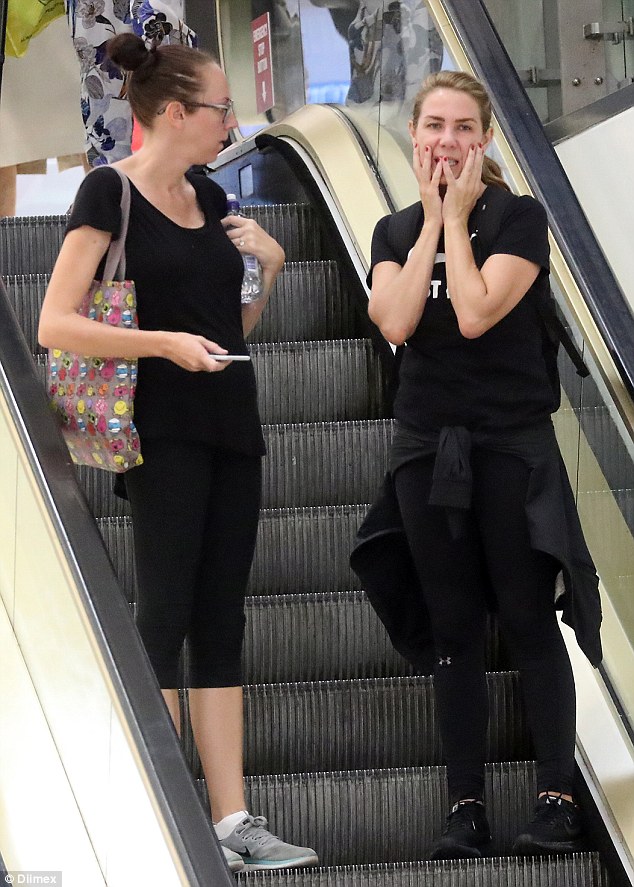 Everything ok? Appearing to have just finished exercising, the NOVA radio star appeared downcast while shopping with a friend

As late as last December, the actress addressed the persistent rumours of a marriage split with her husband of seven years, telling Stellar Magazine they were untrue.

‘It doesn’t hurt my feelings, not anymore,’ the 37-year-old told the publication.

‘I think in the old days it did. There’s no point in getting bogged down about what other people think is happening in my life.’

Far and away? Kate appeared to cover her hands with her face while riding the escalator

The actress also revealed that she and her former Home And Away star Bec Hewitt, often joke about which one of them makes it into weekly fodder.

‘The only positive in having the magazines write about my love life is that I know the Hewitts are getting a week off.’

Kate and her NRL star beau Stuart, 37, wed in an intimate country-style wedding in 2010, a year after getting engaged on holiday in Europe.

The couple share a daughter Mae, who was born in 2014. 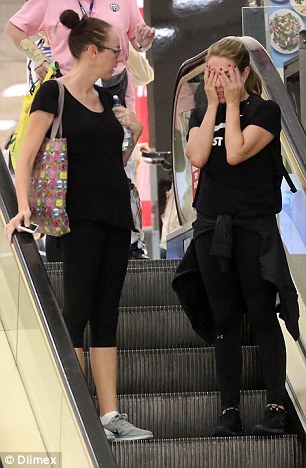 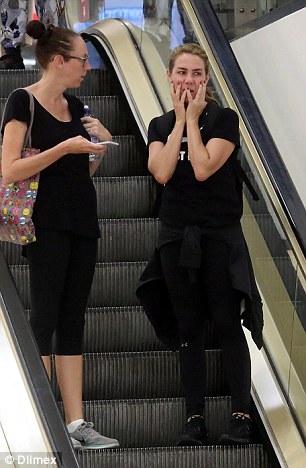 Deep and meaningful? Kate’s friend appeared to be listening intently while the pair were spending time together at a Sydney shopping centre

For the outing, Kate wore an all-black ensemble including a Nike t-shirt emblazoned with ‘Just Do It’ while wearing Under Armour compression tights with a jacket tied around her waist.

Kate opted to wear a pair of all-black Nike runners and her brown hair in a casual pony tail.

Sporting a bit of glamour, Kate’s fingernails were painted a shiny red. 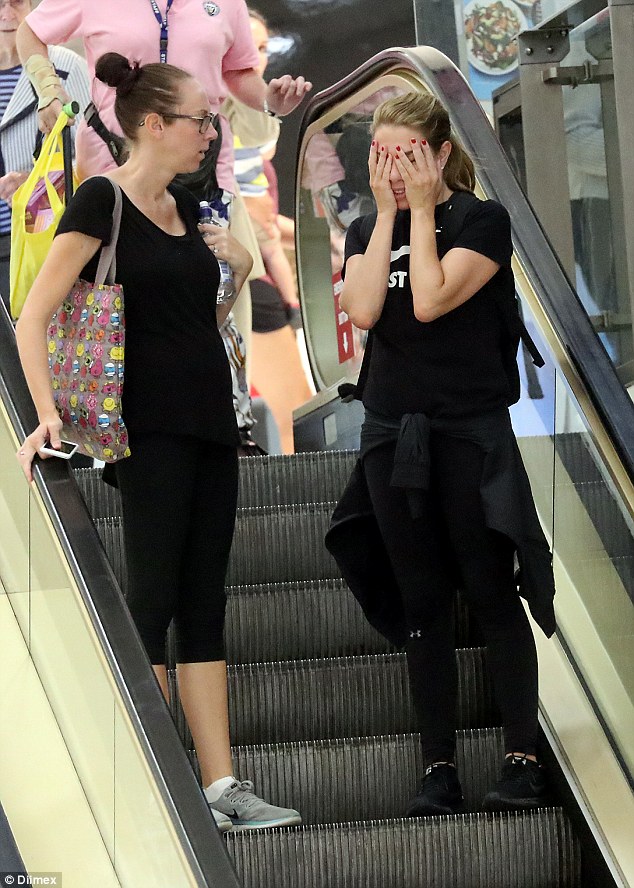 Something wrong? Kate covered her face a number of times while chatting with her friend before the pair took in an exercise class together

Speculation of a break-up began after Kate and Stuart bought a new house in the Southern Highlands last August.

The Daily Telegraph alleged the pair were living separately, with the retired football player residing in their new home, while Kate remained in their Sydney property with daughter Mae.

Daily Mail Australia has reached out to Kate Ritchie’s management for comment. 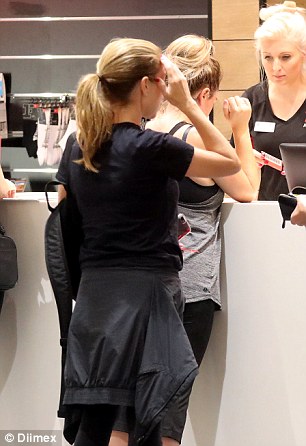 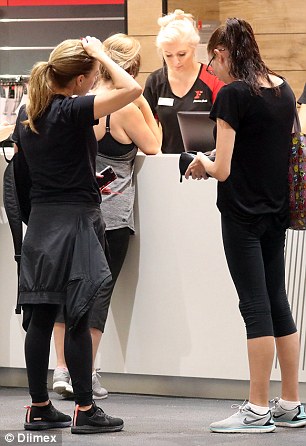 Annoyed and tired? The pair took in a class together at Fitness First, with Kate seeming impatient and a little upset 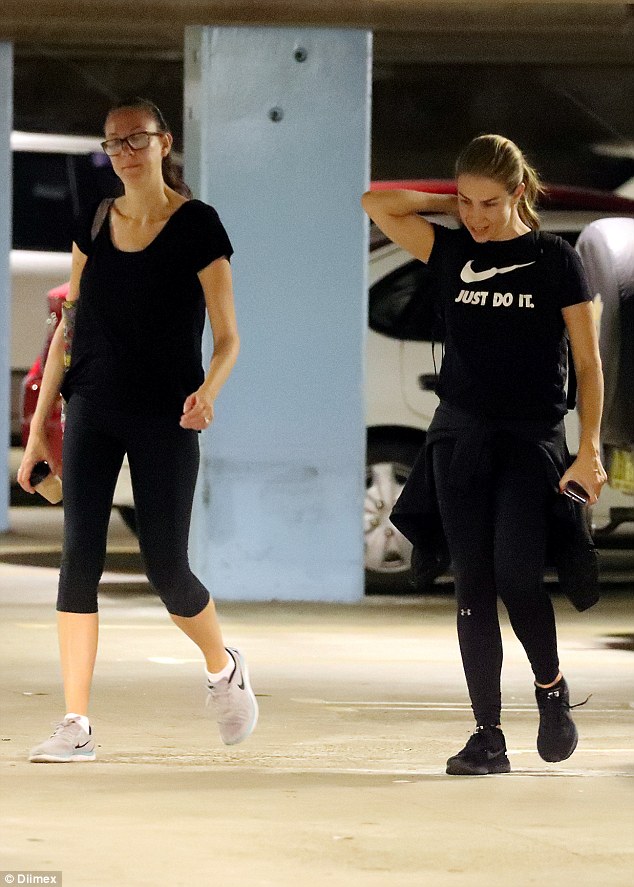 Burning off stress? Kate looked happy enough when the pair arrived for the class, with the former actress clutching her phone