The brand beloved by the Duchess of Cambridge and Michelle Obama is soon to be within the grasp of us all thanks to a collaboration with LK Bennett. Its husband-and-wife design duo talk shop

Remember when designer collaborations with high-street stores were something of a novelty? When Designers at Debenhams first appeared on the scene, meaning anyone could suddenly afford Betty Jackson and Jasper Conran, or when Karl Lagerfeld and Stella McCartney were among the first to launch cut-price collections at H&M?

Nowadays it can seem as though there’s a collaboration with somebody somewhere every week of the year. But next month’s unveiling of the Preen by Thornton Bregazzi range for LK Bennett is the one that the YOU fashion team are most excited about – if there’s a chance for us to pick up a silk dress for less than £300, we’re in.

Created by husband-and-wife team Justin Thornton and Thea Bregazzi, both of whom hail from the Isle of Man, Preen has been around for 21 years. It is stocked by all the right outlets – Selfridges, Net-a-Porter, you name it – and worn by all the right women: the Duchess of Cambridge, Michelle Obama, Samantha Cameron and Hollywood stars ad infinitum.

The Preen runway show is one of London Fashion Week’s hottest tickets: this time last year Justin and Thea memorably employed florist Flora Starkey and make-up artist Val Garland to adorn models with dried petals and ferns, as though their signature floral prints had escaped from fabric to skin: ‘You have to be a bit theatrical when it comes to shows,’ Justin says. ‘The looks are not how your average customer is going to wear something. On the catwalk things can be styled to the nines; in real life, the effect of the same garment is often far more simple.’

The Preen x LK Bennett offering includes pieces not dissimilar to, and certainly very much inspired by, previous Preen collections – dresses with asymmetric hemlines in graphic prints, a jewel-emblazoned knit in royal blue and a sensational sequined number that will look a million dollars come Christmas – but all appear a whole lot more doable when hung on an LK Bennett hanger.

And, of course, that’s the trick: LK Bennett’s customer gets introduced to Preen in a more wearable light and Preen fans get a slice of the brand for a lower price, perhaps picking up a pair of LK courts in the process.

At least that’s the plan – one that Justin and Thea know well: Preen already has a popular range at Debenhams, Studio by Preen, a more mass-market offering than the limited-edition LK Bennett collection. ‘It is interesting to get our name out to a wider audience,’ says Justin. ‘These are women who already love design and quality, but what we offer is perhaps something a little more experimental. I think retailers can make the mistake of thinking pieces are too edgy, but most people have a great appreciation for design, for something a little different.’

Justin and Thea started running Preen from a tiny boutique on London’s Portobello Road in the mid-90s, making clothes in the back and selling them out front. The pair have erred on the acceptable side of edgy, keeping their eye very much on the commercial ball. They are credited, for instance, with inventing the modern skinny jean, making batches during the week, then promptly selling out every Saturday.

Kate Moss was among many fans at the time. ‘Girls wanted to look like the skinny boys in bands; the problem was those boys didn’t have hips,’ says Thea. ‘But we managed to find a style that worked, even if sometimes they were so hipster they were impossible to sit down in!’ They avoid denim now. ‘You can get skinny jeans for £25 on any high street, so what’s the point in doing a designer version?’ says Justin.

Preen has always attracted high-profile fans à la Ms Moss, but the endorsement of a first lady, the wife of a prime minister and a future queen has somewhat elevated things in recent years. ‘We don’t know how the Duchess came across us, but she wore the same design twice – that was quite amazing,’ says Justin of the Finella dress Kate wore in both red and black last year. 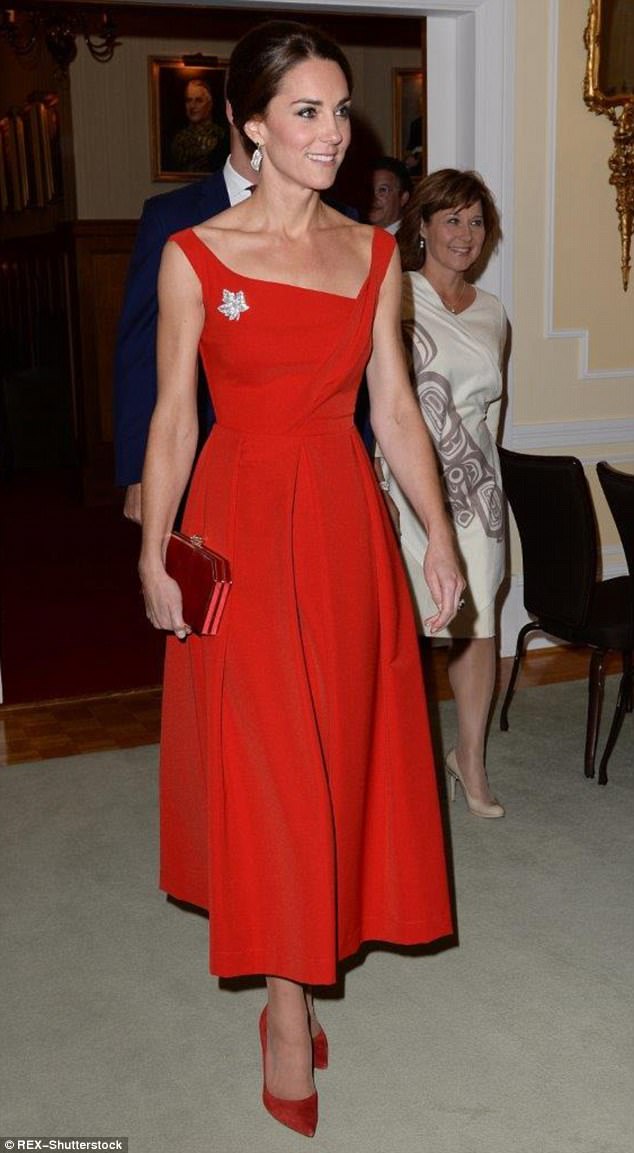 The Duchess of Cambridge wearing a Preen dress last year

The style is from their Ted (The Event Dress) collection, rather than from the runway, and I gush that it is far and away my favourite DoC look. ‘So many people have said that! It can’t be easy dressing for all those events, but she does such a good job of it,’ Justin says. ‘That dress was already one of our bestsellers but after Kate wore it, it sold out worldwide in a matter of days.’ Preen is continuing the style: it is currently available in teal from Net-a-Porter. 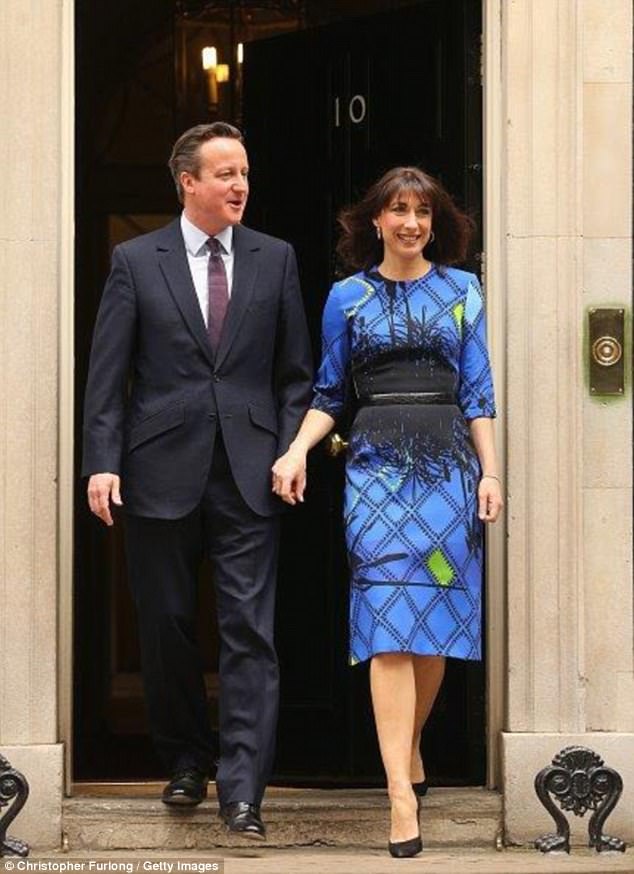 Samantha Cameron in a Preen design with husband David

Samantha Cameron chose Preen when her husband won the 2015 election and again when he resigned the following year after the Brexit referendum. ‘She is such a lovely lady and she always comes in person for fittings at the studio,’ says Thea. ‘It went down very well with our mums that a dress of ours might have had an audience with the Queen!’

What went down even better was treating their mothers to a trip to the White House, where Thea and Justin had been invited to a party hosted by Michelle Obama, a loyal client ever since spotting a Preen outfit worn by a friend of hers. ‘That was a career highlight.

I stood there thinking, goodness, it’s amazing how far frocks can take you!’ says Justin. Thea adds: ‘Michelle said to my mum, “I bet you are one proud Mama.” That was brilliant,’ says Thea. ‘She gave a very inspiring speech, too, about how important it is to empower young people day-to-day, how we should all say “well done” more. It was simple, powerful stuff.’

Would they dress Melania Trump if the call came in? ‘I think politically it could be a bit risky,’ Justin offers. ‘I mean, she is a beautiful woman, but it’s all a little bit uncomfortable, isn’t it?’

Justin and Thea only formally tied the knot this year, but they have known each other since meeting at art college on the Isle of Man and started dating a few years later, having both moved to London. ‘The Isle of Man is a very small place. We had to get off the rock!’ Justin says. He claims the fact they are partners in every aspect of life – including as parents to daughters Fauve, nine, and Blythe, five – makes them better equipped to deal with the pressure placed on designers to keep up with the fashion treadmill while retaining integrity, not to mention the bottom line. 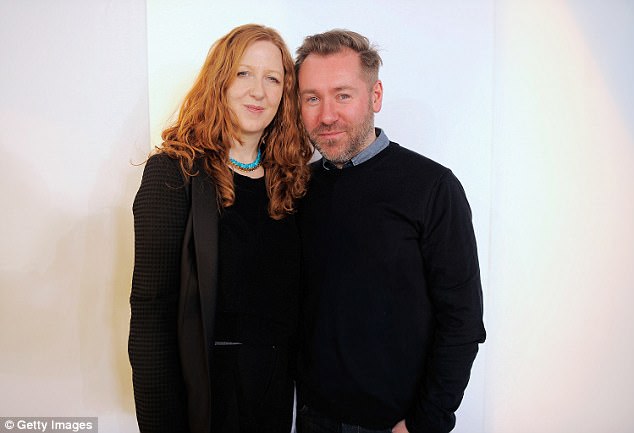 ‘You can’t avoid talking shop at home – at least we can’t,’ says Justin

‘We share the load and that makes a huge difference,’ he says. ‘Until we had children we would do everything and make every decision together. Since the girls came along we have adapted things so that Thea can spend more time at home and less time crunching numbers, but there is still a great strength in being a twosome.’

There are no on/off work switches in the Preen household, however. ‘You can’t avoid talking shop at home – at least we can’t,’ says Justin. ‘Some people would think that was a nightmare, but it works for us. We argue, but when we do it’s mostly about work – it could be about a colour or a fabric. Maybe that’s a good thing; better that than letting it out on things that are deeply emotional!’

The only time they manage to avoid work is during occasional weekends at their arts and crafts cottage by the sea in Walberswick, Suffolk, where they are free from the temptations of the London studio, which is only minutes from their home in West London. (Not that this means they escape inspiration: the artist Charles Rennie Mackintosh, who once lived in Walberswick, was a key source of ideas for the LK Bennett collection.)

‘The children can go crabbing and ride their bikes wherever they want; we can potter down to the pub for lunch. It’s idyllic,’ says Thea. ‘Fauve wanted to paint the house pink and, because it’s Suffolk where houses are traditionally pink, we could get away with it – though ours is Nancy’s Blushes by Farrow & Ball. The traditional lime wash and oxblood mix would have been less appealing to a seven-year-old!’

Family life is a relatively new chapter in the Preen story. Thea was turning 40 when she had Fauve. ‘I remember watching a news story about how your fertility starts to go downhill when you hit 30 and I thought, “Oh blimey, well I’ll be 40 next year, I’d better get on with it!” We agreed we would try and it happened straight away. I think I have the Irish fertility gene: both times it happened very quickly, so we were lucky.’ 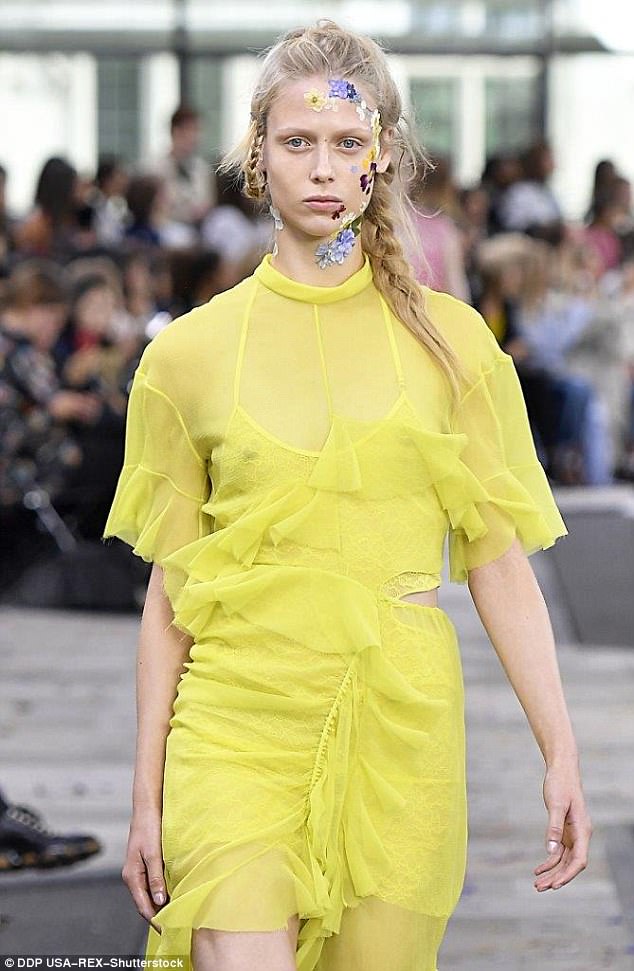 Fauve spent her first year nestled in the corner of the Preen studio and coming along to meetings in her moses basket. ‘Obviously, we were in total denial about the whole thing,’ says Justin. ‘We thought life was just going to carry on exactly as normal. We would turn up to important meetings with department stores with our baby in tow and people would think we were mad.’

The girls keep them grounded: the couple have been approached by larger fashion houses on the lookout for fresh creative direction but have so far resisted moving from their British base. ‘We’ve had talks with different people but you have to consider those moves carefully if you have children. In most cases you’d need to move abroad and give up your own business, too,’ says Justin. ‘For us it’s never felt the right thing to do.’

Homeware is next on the agenda, in Preen’s signature prints. A beauty range might be on the cards, plus a perfume, which would be the thing we’ll want to snap up once the LK Bennett collection has been and gone – and, I warn you, it will do very quickly. Don’t expect that sparkly number to hang around until party season.

LK Bennett x Preen by Thornton Bregazzi will be available from 5 October, prices from £195-£550, lkbennett.com