Kathy Griffin has said she was left ‘unemployable and uninsurable’ after her infamous photo with an effigy of Donald Trump’s severed head.

The comedian said she had faced threats and been approached by a man with a knife after the 2017 stunt which made her a Hollywood pariah.

Griffin initially apologized for the stunt but later revoked that statement and now stands by the photo and insists it was free speech.

Now she has released a film – which was partly shot on her iPhone at the height of the scandal – in an effort to tell her side of the story.

Stunt gone wrong: Kathy Griffin poses with the effigy of Donald Trump’s severed head in 2017 – which sparked outrage from across the political spectrum

‘You can be as offended by that photo all you want, that doesn’t bother me at all,’ she said.

In the wake of the photo she also had to buy metal detectors because ‘there were all kinds of incidents. A guy came at me with a knife in Houston,’ she said.

The two-time Emmy winner claimed she had been under investigation by federal authorities into whether she was a credible threat.

She then said that she was put under federal investigation, and even put on the no-fly list while also being ‘interrogated under oath… which has never happened in the history of this country.’

‘The President and the Department of Justice shouldn’t make you unemployable and uninsurable,’ she said.

‘I’m still on the D-list,’ she quipped, referring to the Bravo reality series that earned her two Emmy Awards. 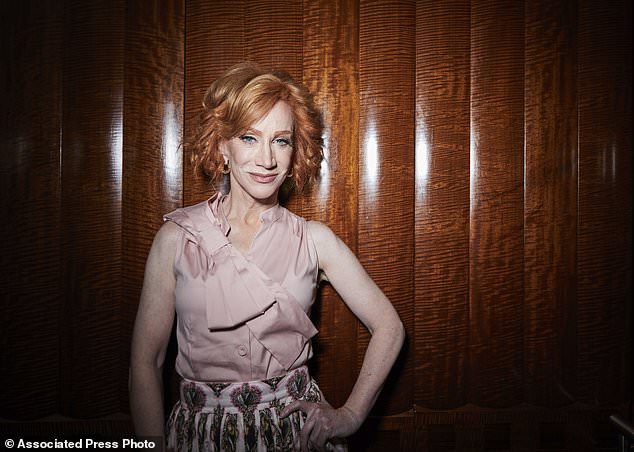 Griffin, pictured in New York earlier this month, said she had faced threats and been approached by a man with a knife after the 2017 stunt which made her a Hollywood pariah

The scandal erupted in May 2017 when Griffin posed with the bloodied mask in a photoshoot with photographer Tyler Shields.

Griffin, now 58, captioned it with a reference to ‘blood coming out of his wherever’ – a play on Trump’s controversial comments about TV host Megyn Kelly.

But the photo was widely understood as a joke about the President’s violent death.

She faced condemnation from across the political spectrum, including from the President himself who said Griffin ‘should be ashamed of herself’.

Trump called the stunt ‘sick’, adding that his young son Barron was ‘having a hard time with this’.

Chelsea Clinton, the daughter of Bill and Hillary Clinton, called it ‘vile and wrong’ and said it was ‘never funny to joke about killing a president’.

She had been the co-host of CNN’s New Year’s Eve broadcast for 10 years before she was fired in the aftermath of the photo. 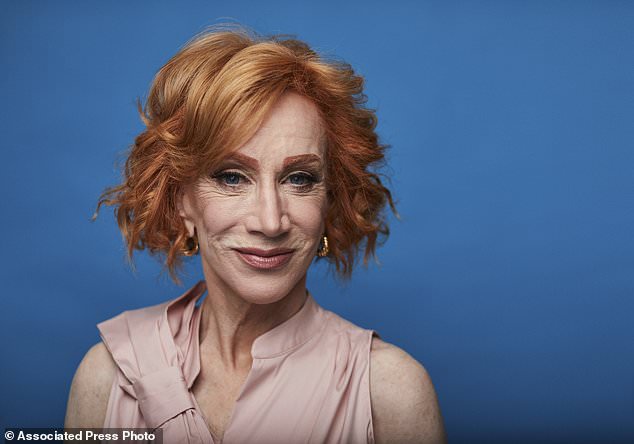 This July 16 photo shows Kathy Griffin posing for a portrait in New York to promote her film ‘Kathy Griffin: A Hell of a Story,’ a self-made account of the Trump photo scandal

The comedian initially retreated, admitting she had gone ‘way too far’ and asking for ‘forgiveness’.

But she has since reversed her apology.

Two days into the fallout from the photo, she began to film on her iPhone to capture what was happening in the moment.

The result is a feature film, ‘Kathy Griffin: A Hell of a Story’ which is part documentary, part comedy special.

She financed it herself and carried a poster from interview to interview on a recent press day.

The documentary portion gets raw, Griffin said. ‘Like ugly Kathy, no makeup, crying.’ She taped stand-up segments which are edited into the film.

Fathom Events have agreed to show the film on July 31 in 700 U.S. theaters.

‘I just want people to know you don’t have to go down. You can take a few punches, but after I kick the bucket, I want somebody to go, you know that crazy red head? They got her but she didn’t go down.’