Kathy Griffin has announced that she will attend this year’s White House Correspondent’s Dinner – almost a year after she recorded a video of herself holding a severed head depicting President Donald Trump.

Trump skipped last year’s dinner, an annual Washington, DC event dubbed ‘nerd prom’ because of its mix of politicians, journalists, and other movers and shakers who attend.

During past administrations, the president would attend the dinner and deliver a comic monologue poking fun at the press and his political rivals.

It is not clear if Trump will attend this year. Throughout his political campaign and presidency, Trump has attacked the news media as ‘fake news’ and ‘the enemy of the people.’

Griffin posted a message on Twitter Friday saying that she was invited to the annual event as a guest of The Washington Blade, the nation’s oldest LGBT newspaper.

Trump’s administration has been criticized widely by the LGBT community for its socially conservative agenda.

Griffin posted a message on Twitter Friday saying that she was invited to the annual event as a guest of The Washington Blade, the nation’s oldest LGBT newspaper

Griffin, 57, has been an outspoken supporter of gay and transgender rights, including the legalization of same-sex marriage.

The actress and comedian sparked nationwide outrage last year for the photo shoot in which she is seen holding a blood-soaked, severed head of a doll depicting Trump.

Initially, Griffin apologized for the photo that appeared last May, taken by photographer Tyler Shields and posted on social media.

But she later said she was no longer sorry, because the reaction had gotten so out of hand. 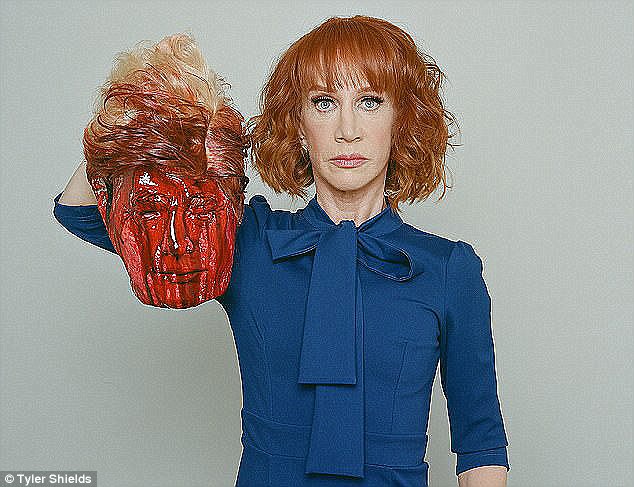 As a result of the backlash, she lost her job as a pitchwoman for Squatty Potty, the toilet stool company.

Griffin was also fired by CNN, which hired her to co-host the network’s New Year’s Eve broadcast alongside Anderson Cooper.

She was also forced to cancel the remaining dates on her tour when venues told her she was not welcome.

Griffin was also investigated by the Secret Service, though no charges were ever filed.

In the 10 months since the controversy erupted, Griffin has been busy plotting her comeback.

She announced on HBO’s Real Time With Bill Maher on Friday night that she had just booked upcoming shows at New York’s Carnegie Hall and at Washington’s Kennedy Center – ‘Trump’s backyard,’ she called it.

A rep for Carnegie Hall told the Los Angeles Times that Griffin’s show, scheduled for June 26, sold out in less than 24 hours.

‘For most of the past year I was convinced that my career was over. … I have felt moments of despair that I can’t describe in a tweet. Thank you from the bottom of my heart. … I am so grateful.’ 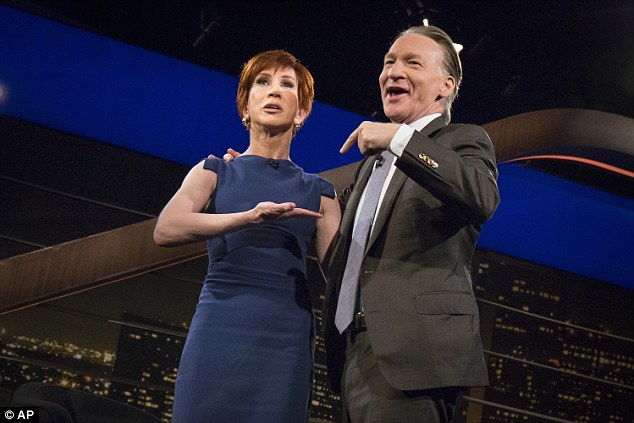 The backlash resulted in Griffin’s tour being canceled and her losing jobs. Earlier this month, she told HBO’s Bill Maher (right) that she would resume touring in the US after a nearly year-long hiatus

During her segment with Maher, she said: ‘I’m dipping my toes into touring again.’

The Grammy- and Emmy-award winning performer told Maher that the Republican president and his supporters would prefer she never worked again.

Griffin’s appearance on Maher’s show – and what she called her ‘small victorious announcement’ – appeared to mark the beginning of her comeback, after the backlash over the offending photo last May badly hurt her ability to work.

‘TMZ was reporting my show cancellations in real time,’ she said of her standup tour.

Unable to tour in the United States, Griffin went overseas, performing in 23 cities in 15 countries, she said.

But because she was under investigation in the United States, she was ‘detained at every single airport,’ she said.

Griffin thanked Maher for being one of the only celebrities who publicly supported her during the ordeal.

Introducing Griffin, Maher told the audience that ‘she is a good American who loves her country and should be able to work in it.’

Referring to the desire of some Trump supporters to ‘decimate’ her, she raised her arms defiantly and exclaimed, ‘I’m not decimated!’