Kathy Griffin is saying goodbye to 2018 by sharing a bit of shocking information about her decade-long stint as co-host of CNN’s New Year’s Eve telecast.

‘I worked my way up by the 10th year at CNN to get a fee of $150,000. By the way, just as a point of reference, Anderson Cooper regularly bragged for years that his annual CNN contract was $10 million a year,’ wrote Griffin on Twitter.

‘The first two years I appeared on CNN, it didn’t even occur to me to ask for a salary. The 8th year when I asked Jeff Zucker for a raise, he was so angry he docked me 30%. I’m sorry to say I took the pay cut because I truly enjoyed making you all laugh.’

CNN has yet to respond to multiple requests for comment.

D-list: Kathy Griffin shared some details about her contract for hosting CNN’s New Year’s Eve telecast with Anderson Cooper (Griffin and Cooper above in 2012) 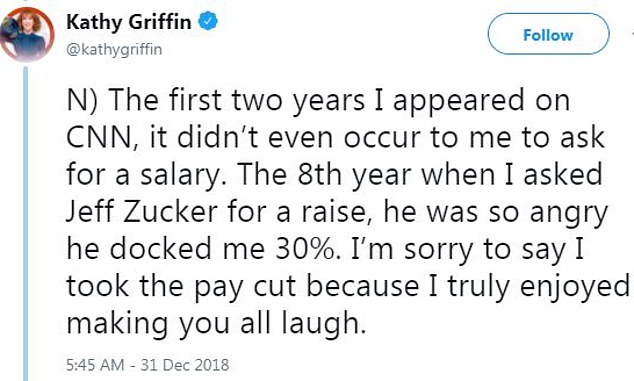 El Jeffe: ‘The 8th year when I asked Jeff Zucker for a raise, he was so angry he docked me 30%’ said Griffin (above)

Griffin revealed this information in a thread about Leslie Jones, who will be appearing on NBC this New Year’s Eve alongside Carson Daly and Chrissy Teigen.

The comedian, who was very publicly booted by CNN after posing for a photo with a prop of President Trump’s decapitated head, decided to share her story after a number of fans commented on hos wmuch her presence is missed on the program.

She was replaced by Andy Cohen, who will return again for his second stint as co-host this year.

Griffin said that Jones had initially been set to co-host the CNN show, but was then downgraded to only a few segments, a notion that she found ridiculous.

‘I’m thrilled she is going to appear in the NBC New Years telecast with Carson Daly/Chrissy Teigen, but it’s time for Leslie to co-host/host. That would be progress…it would have been a step in the right direction for all women if she got the CNN gig,’ wrote Griffin.

‘You have to admit, it didn’t make sense that NBC Uni wouldn’t have a problem with Andy Cohen, who also works for NBC Uni, appearing on CNN, but would have a problem with Leslie? Since Leslie didn’t work out, CNN couldn’t find one woman standup comic star to co-host? Jeff?’ 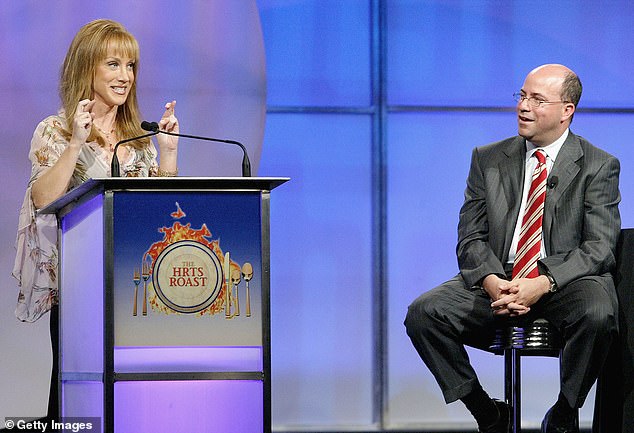 Zucked over: She also said that she did not ‘even think to ask for a salary’ during her first two years hosting the program (Griffin and Zucker in 2004)

She then ADDED: ‘I didn’t hear anything about what Leslie‘s fee will be on NBC, but I really hope it is AT LEAST $150,000 because that is a nice paycheck and it’s what she deserves.’

Griffin posted at the end of her thread that this was all part of her resolutions heading into the new year.

‘I have learned it is essential to stick up for others in ways I truly wish others would have stuck up for me. I have done that more than ever in the past year and will continue to do it no matter what, wrote Griffing.

She then added: ‘I will stay positive, be as brave as I can in my comedy, never quit, and never let the old boys club keep me silent or out of work.’

The comedian closed out by noting: ‘I may not be able to have a drink with you, but I have served up a pot of piping hot tea!’