She faced a huge controversy last year after doing a photo-shoot in which she held a mask styled to look like the severed head of President Donald Trump.

And the evening the picture went public, Kathy Griffin sought advice on the fallout from Kris Jenner, Melanie Griffith and Rita Wilson.

Kathy, 57, covered The Hollywood Reporter and told the magazine: ‘We hashed out options, and they were trying to make me feel good – getting the laughs going because I was so freaked out.’

Holding forth: In The Hollywood Reporter, Kathy Griffin discussed the huge controversy she faced last year after doing a photo-shoot in which she held a false severed Donald Trump head

She had already invited these three women over to eat that night, but as the scandal raged around her ‘I wondered: “Should I cancel the dinner?”

‘And then I thought: “No, these are three women who could probably give me good advice.”‘ After her guests arrived, ‘We sat at the table and talked about it.’

The photo set off a storm of condemnation, including CNN firing her from the New Year’s Eve specials she co-hosted with Anderson Cooper.

Anderson himself tweeted that the photo-shoot was ‘disgusting and completely inappropriate,’ and Kathy’s friend Debra Messing compared it to ‘when people lynched Obama effigies.’ 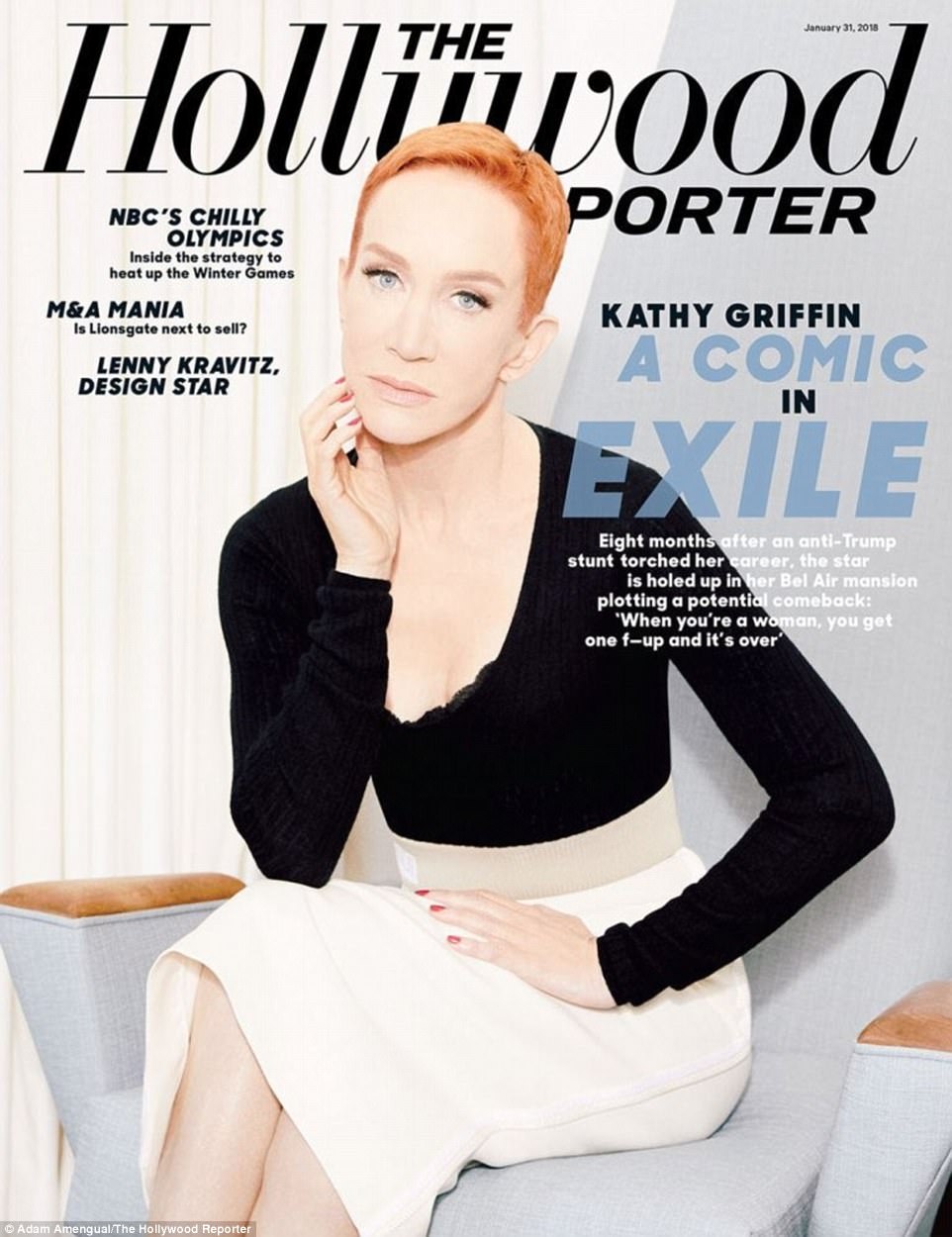 Ritzy: Kathy, 57, covered The Hollywood Reporter and told that she, Kris Jenner, Melanie Griffith and Rita Wilson ‘hashed out options’ over dinner the night the photo went public

Donald Trump tweeted: ‘Kathy Griffin should be ashamed of herself. My children, especially my 11 year old son, Barron, are having a hard time with this. Sick!’

The stunt cost the stand-up comic a number of jobs and bookings, with numerous venues cancelling her gigs because of death threats made against Kathy.

These chilling messages continue to this day, and the most serious are looked at by FBI officers as they are deemed to be a ‘credible threat.’

She shared: ‘I don’t blame the theater owners [that canceled me]. These are theaters that are normally playing Mamma Mia! or Stomp, and all of a sudden they’re getting calls saying they’re going to “shoot her in the **** live on stage.”

‘That was the most common threat. And that they were going to “cut my head off and stuff it up my ****.””

Kathy remembers being interrogated by two Secret Service officers, one male and one female, at her home. 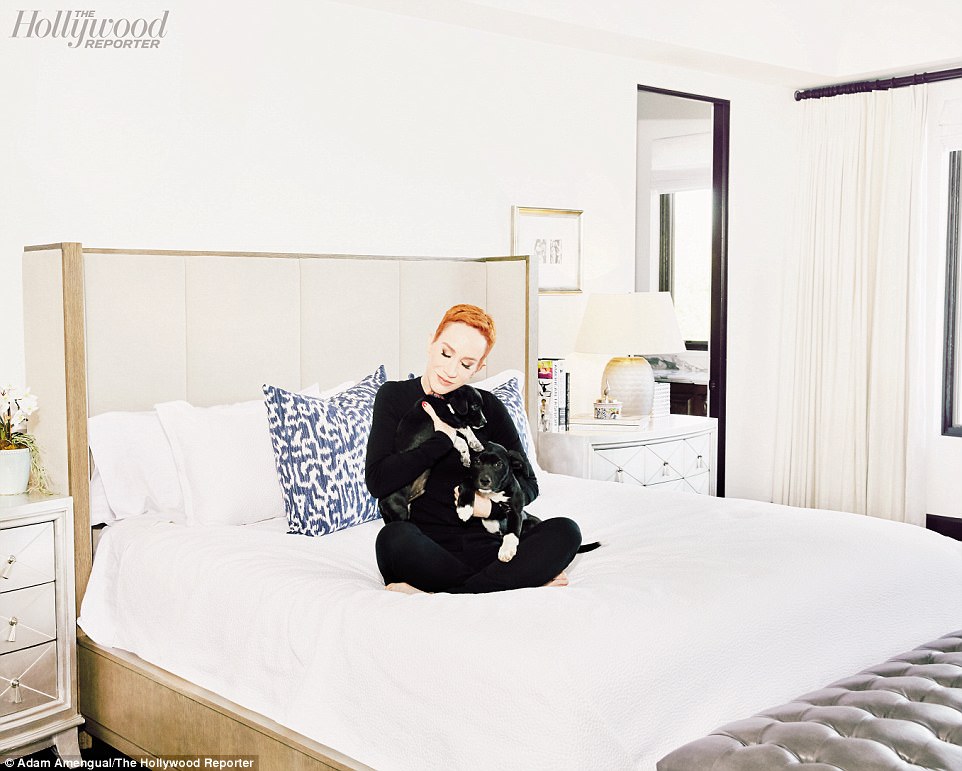 ‘He was like, “Tell me more about the sword.” I was like: “Well, it’s big. You know the gays!” And then it was like: “No more sword-asking questions.”‘ 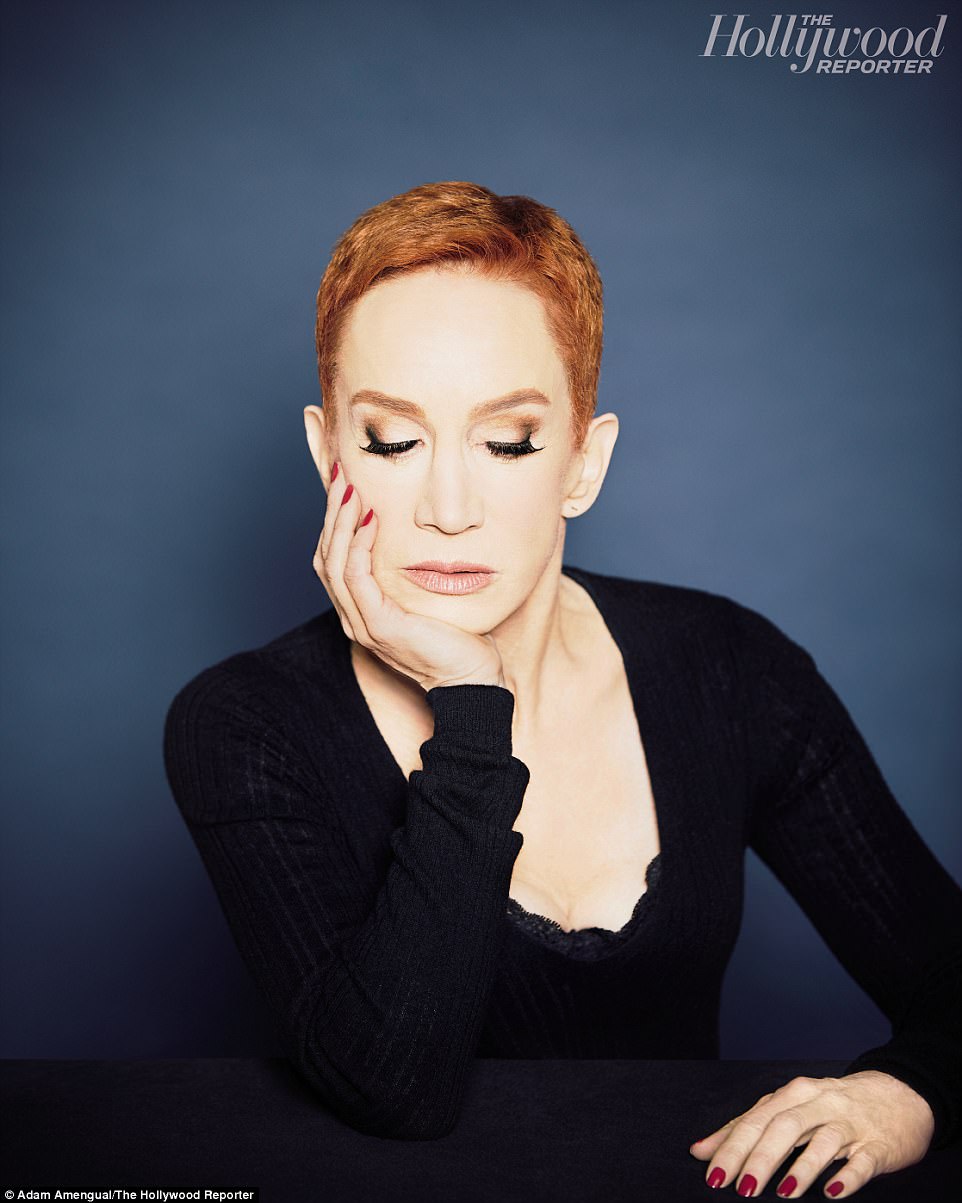 Menaced: She shared that she still receives death threats that are looked at by the FBI

The Fashion Police star became a pariah in her native America for much of 2017 and had to go overseas to continue her stand-up career.

She thinks it is unfair that she has been blacklisted for making a political joke when some celebrities have committed actual crimes.

Katy – who is in a long-term relationship with her tour manager Randy Bick – said: ‘I didn’t commit a crime. I didn’t rape anybody. I didn’t assault anybody. I didn’t get a DUI. I mean, my God, there are celebrities that f***ing kill people.’ 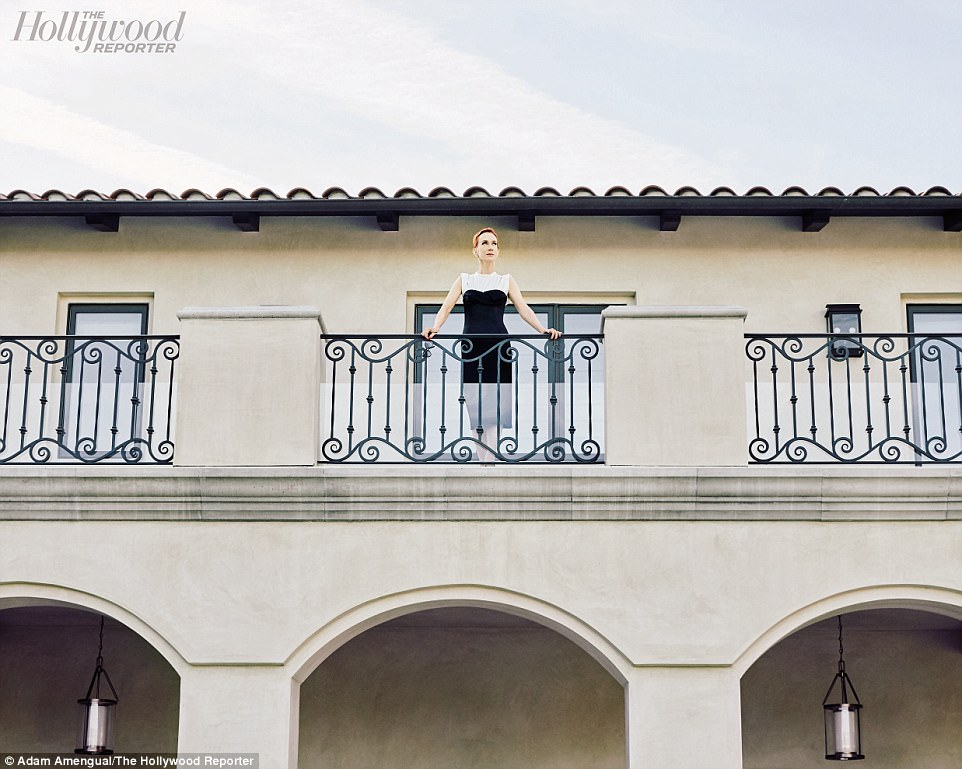 ‘I didn’t rape anybody’: She thinks it is unfair that she has been blacklisted for making a political joke when some celebrities have committed actual crimes