Comedian Kathy Griffin shocked attendees of the 2018 White House Correspondence Dinner on Saturday less than a year after pulling a controversial stunt that nearly ended her career.

Griffin, 57, turned up to the prestigious Beltway event wearing a racy yet elegant black vintage gown where she was greeted with bemused smiles and embraces from DC veterans, celebrities and journalist alike.

‘I’m having the time of my life at the White House Correspondents Dinner!,’ Griffin posted to her Twitter page along with a picture of herself and Washington, D.C., bureau chief for American Urban Radio Networks April Ryan.

Griffin, 57, turned up to the prestigious Beltway event wearing a racy yet elegant black vintage gown where she was greeted with bemused smiles

Griffin found herself mired in controversy last May following a photo-shoot where she was shown holding a fake severed head resembling President Donald Trump.

Before attending Saturday’s gala, Griffin told online publication Washington Blade –  who extended an invitation to the successful comedic star – that she was ready for whatever reaction her appearance might provoke.

‘I’m only going to bring my head, but that’s attached to my body,’ Griffin quipped to the Blade a day before the dinner. 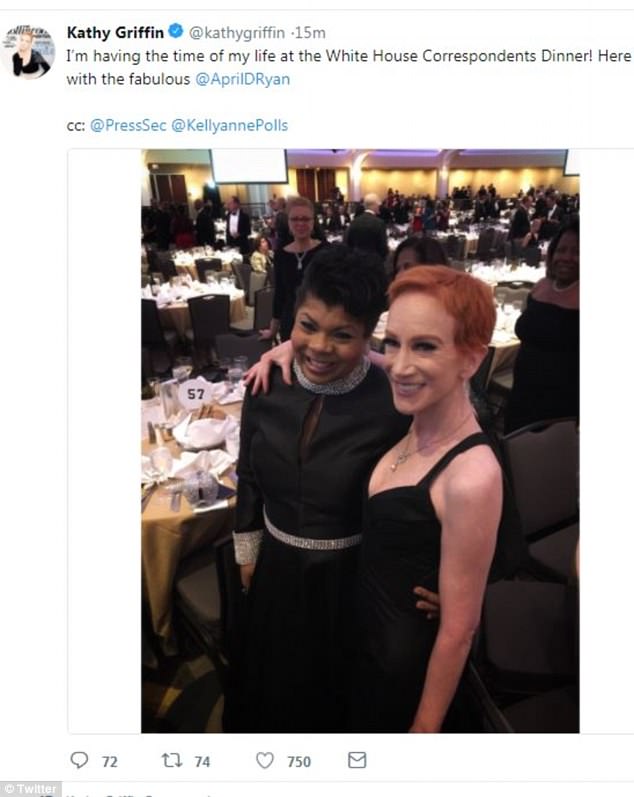 Before attending Saturday’s gala, Griffin said she was ready for whatever reaction her appearance might provoke 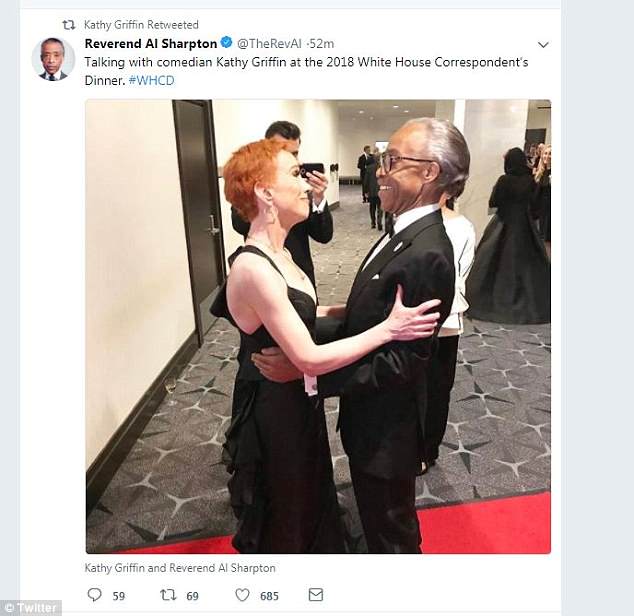 In November 2017, Griffin told the Associated Press that Trump had executives place her on a ‘Hollywood blacklist’

Initially apologetic for the disturbing photograph, taken by Tyler Shields, she retracted her statement after suffering a torrent of criticism she said was unwarranted.

‘I really never thought that photo would take off at all. Like I’ve been doing ‘shocking’ things my whole career.’ She called the fallout ‘faux-outrage.’

She said there were a few missteps, including a hastily put-together apology video followed by a ‘disastrous’ press conference with attorney Lisa Bloom in which she called Trump a ‘bully’ and only worsened the still-spiraling disaster. Initially apologetic for the disturbing photograph, she retracted her apology after suffering a torrent of criticism she said was unwarranted

‘My social media was so flooded that I really thought, ‘OK, I am the most reviled person in the world right now,’ she said. ‘It’s been a long time to sort of process that and figure out what’s real and what isn’t.’ She added: ‘I really do believe if it happened to me it can happen to you.’

During those dark days, Griffin said many colleagues like Anderson Cooper turned away but one celebrity reached out — Jim Carrey, someone she didn’t know that well. He advised her to find the comedy in her absurd situation.

‘It was really meaningful to me that he called,’ she said. ‘Jim’s advice was right on, which is, ‘Lean into this topic and you’ll find the comedy.’ And luckily I found a lot of comedy while hibernating.’

In November 2017,  Griffin told the Associated Press that Trump had executives place her on a ‘Hollywood blacklist,’ claiming that he he personally orchestrated the near ruin of her career.

‘I didn’t know that the Trump machine had this apparatus ready to go and waiting for an incident like my photo because I’ve said controversial things my whole career and Trump himself has had me roast him,’ Griffin said.

Griffin says she hopes to make her U.S. comeback by laughing about the disturbing photograph that got her in hot water with the feds and almost killed her career. But she also has this warning amid the jokes: ‘If it happened to me it can happen to you.’

‘I’m trying to sort of get people to forgive me and get people to come back to me or give me a chance. And it’s interesting. It’s really like I’m starting all over again,’ she said.

Griffin, who said many people still send her Bibles, acknowledges there are some places in America where she will never be welcomed again and that some TV shows won’t ever invite her back. ‘I still haven’t won over the entire cast of ‘The View,’ she joked.

Hours before the White House Correspondent Dinner was scheduled to start, Griffin posted a tweet expressing her excitement for the event.

‘Nerd Prom is going to be like my high school prom. I wasn’t a virgin then, I’m certainly not a virgin now. One difference….this time I’ll be in vintage @OscardelaRenta instead of pink taffeta!’