She has a newly minted ‘single’ status and a new choppy hair do to match.

And on Tuesday Katie Holmes, 42, proved to be her own best companion as she opted for a solo bike ride through New York City.

The Batman Begins actress looked stylishly sporty in a pair of black joggers and Gucci sneakers as she returned her Citibike to a dock near her Manhattan residence.

Despite her Hollywood stardom, Katie opted for a method of public transportation as she ran errands in the bustling city.

She showed off her slim frame in an athletic-leaning outfit that included black joggers with a white long-sleeved T-shirt and a camel colored baseball cap.

Katie however did add a designer touch to her outfit as she strolled in a pair of Gucci sneakers after returning the shared bike to a designated hub.

And she added a splash of color to the laidback look by way of a floral patterned face mask which covered her makeup free face. 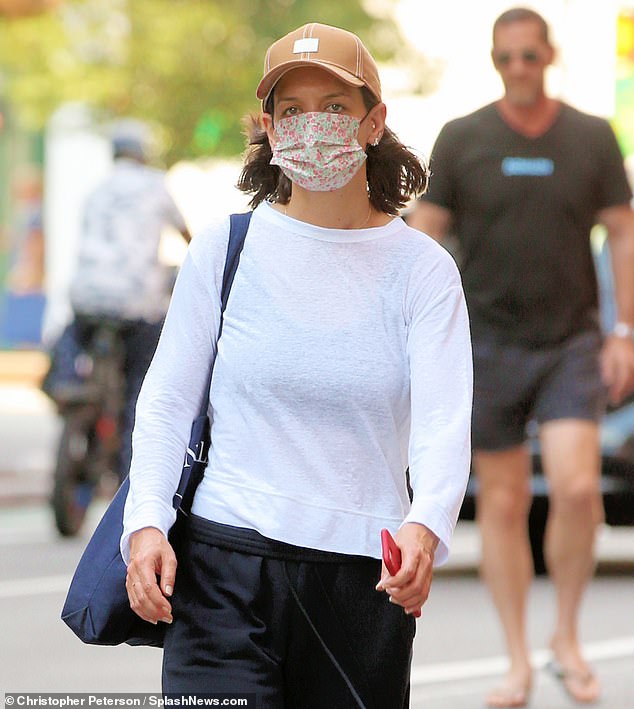 Athleisure: The Batman Begins actress opted to bike around the city in an elevated athleisure look

Pounding the pavement: Katie elevated the laid back look with Gucci sneakers

She and the Emilio’s Ballato chef, 33, parted ways in early May after being attached at the hip since last September.

‘The pair have parted ways amicably but remain friends,’ a rep for the Dawson’s Creek darling told Us Weekly on May 13.

Their whirlwind romance reportedly ‘fizzled out,’ after Katie had spent time in Connecticut directing an untitled romance film and the pair realized they had ‘different schedules and different commitments.’ 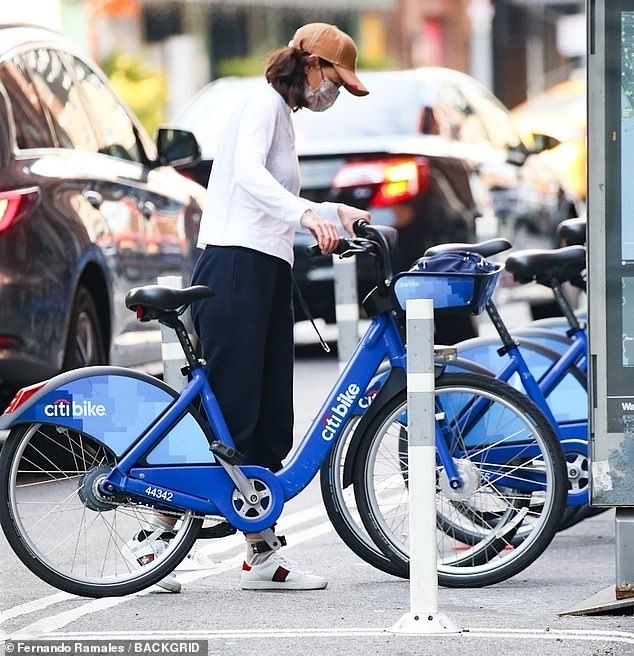 City slicker: Despite her Hollywood stardom, Katie opted for a method of public transportation as she ran errands in the bustling city 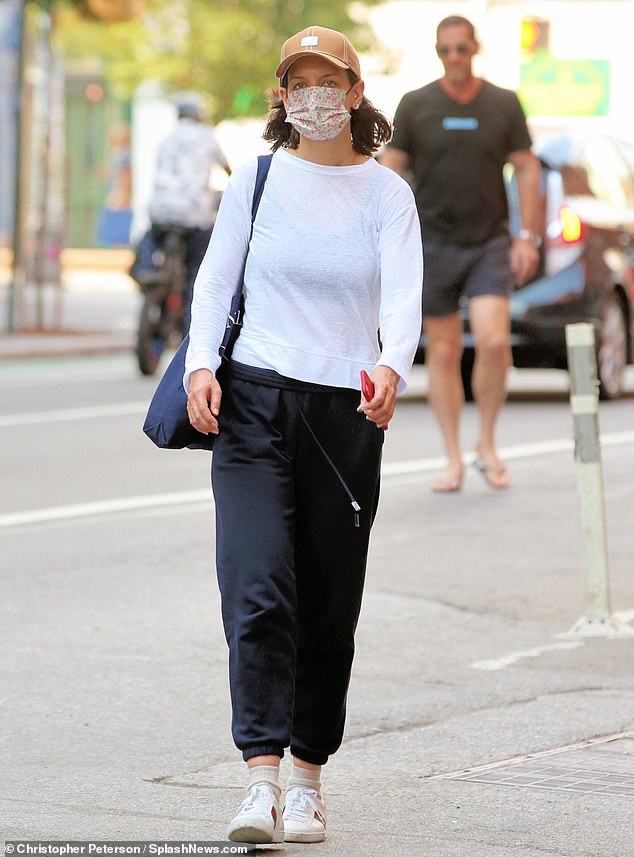 Chop chop! Just weeks ago she debuted a new much shorter haircut which seemed to symbolize a fresh start following her amicable split from Emilio

Just a day after the split was announced, he was reportedly back on dating apps already, including celebrity favorite Raya.

‘It’s not just Raya — he’s on a bunch of other dating apps too. He didn’t exactly hide the fact that he’s broken up from Katie,’ a source told Page Six.

But Holmes proved that despite not romantically being a match, she still had a lot of love for the budding actor as she publicly congratulated him on their film, Almost A Year, ahead of its Tribeca Film Festival release.

‘I am so honored to have been a part of the making of ALMOST A YEAR,’ Holmes — a producer on the indie film —captioned an Instagram post on June 8. ‘Congratulations to the very talented and amazing cast,’ she wrote as she tagged ‘@emiliovitolo’ amongst a slew of other actors. 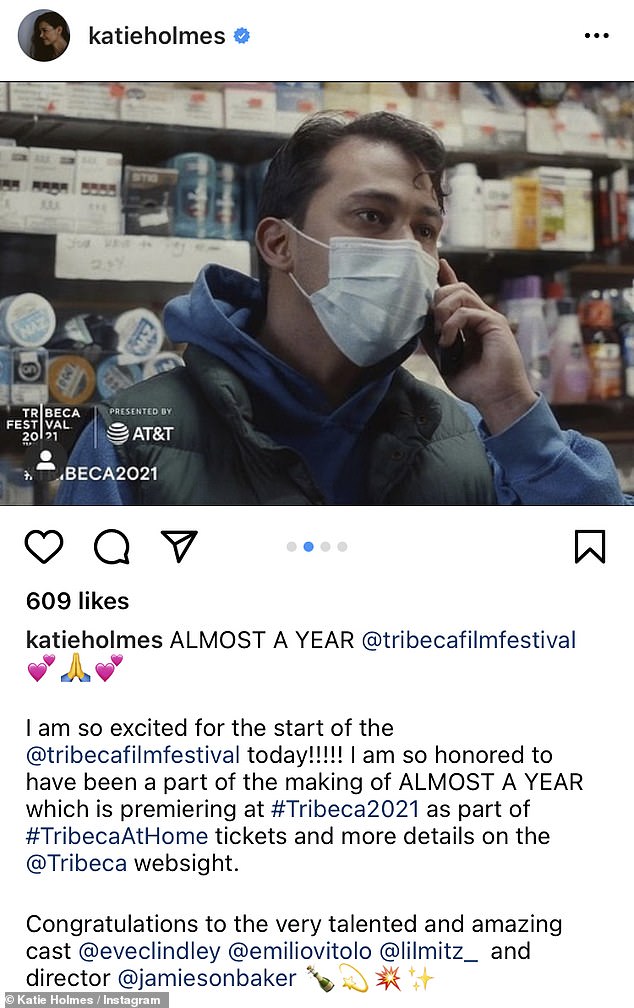 Amicable exes: Holmes proved that despite not romantically being a match, she still had a lot of love for the budding actor as she publicly congratulated him on their film, Almost A Year, ahead of its Tribeca Film Festival release; pictured June 8 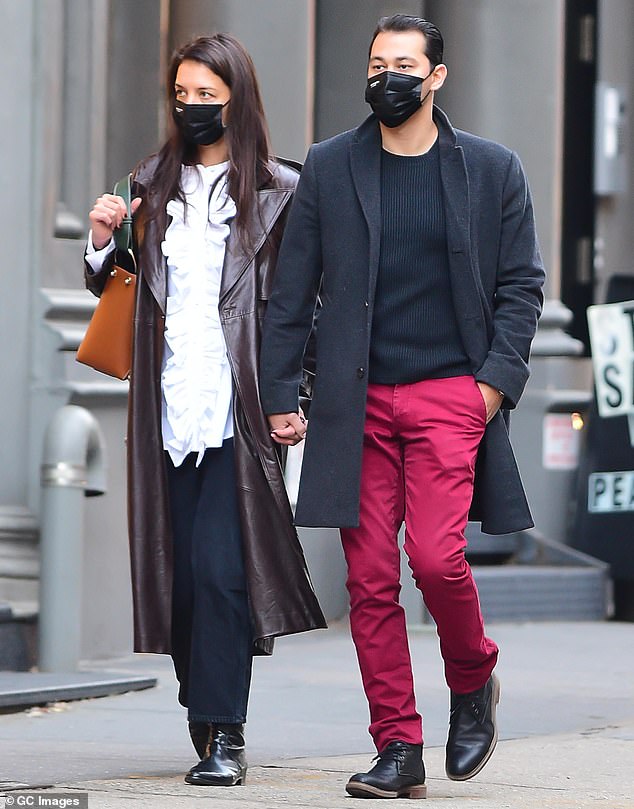 Whirlwind: The pair had been inseparable since they were first publicly spotted out together last September packing on the PDA, prompting him to end his engagement to Rachel Emmons; pictured November 2020

But though Katie has been focusing on daughter Suri, 15, and many other projects she found herself being linked to another recently single Hollywood figure — Jennifer Lopez’s ex-fiance Alex Rodriguez.

On June 13 the former MLB player was seen leaving Katie’s building in the city, prompting rumors the two had rebounded with each other.

But her rep continued to set the record straight as they told Page Six: ‘They have never even met.’

And a source close to A-Rod continued to corroborate the fluke sighting: ‘Alex is looking at lots of different apartments, he didn’t even realize it was Katie’s building — he’s never met her.’ 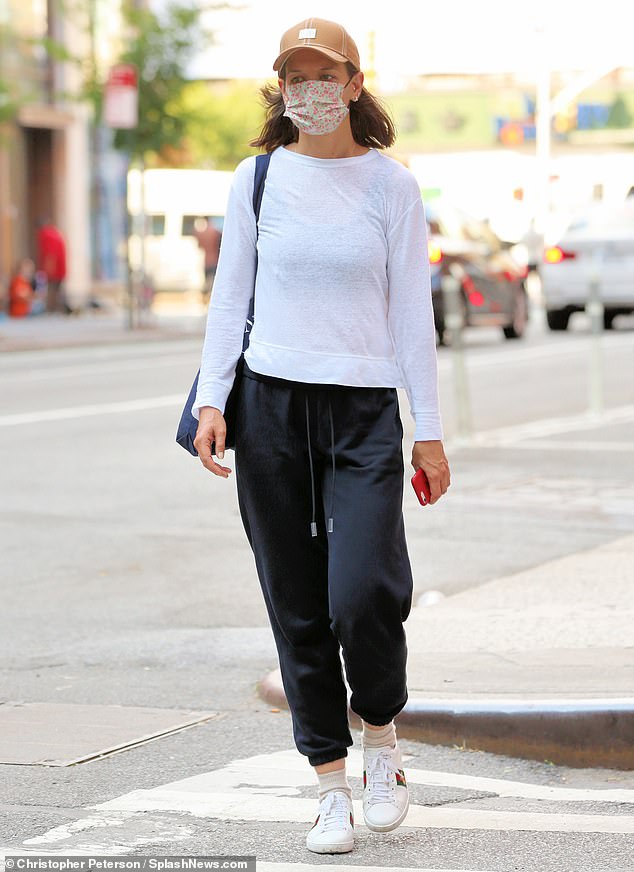 Single lady: The Dawson’s Creek actress sparked rumors she was romantically tied to JLo’s ex after he was spotted leaving her apartment building on June 13 but her reps said ‘They have never even met’