She recently revealed her impressive one stone weight loss, after admitting her heartbreaking Coronation Street plot led her to comfort eat.

And Katie McGlynn oozed confidence as she showed off her toned bikini body on the beach in Mexico recently.

The former soap star, 26, slipped into a pink, green and white snakeskin print string bikini as she enjoyed a refreshing coconut water on the beach.

Wow factor: Katie McGlynn oozed confidence as she showed off her toned bikini body on the beach in Mexico recently

Displaying her ample cleavage and toned midriff in the tiny bikini top, the star turned heads as she walked along the golden sands.

A pair of matching tie-side bikini bottoms rested low on her hips and drew the eye to her tanned legs and peachy posterior.

Her blonde locks were styled in loose waves while a radiant palette of make-up enhanced her pretty features.

The star accessorised with a pair of reflective golden shades.

Toned: The former soap star, 26, slipped into a pink, green and white snakeskin print string bikini as she enjoyed a refreshing coconut water on the beach

Earlier in the month, Katie revealed that before kicking off her fitness journey, she struggled with comfort eating while filming her Corrie’s character Sinead Tinker’s harrowing cervical cancer storyline.

The actress has been training at Ultimate Performance Fitness in Manchester, dropping a dress size and losing a stone since her exit from the show in October last year.

Speaking candidly to Closer Magazine, the actress admitted she would treat herself to sweet treats to help ‘cheer [her] up’ while she filmed the sad scenes.

She explained: ‘It was such a sad story to be taking part in. I was crying in nearly every scene, and quite often I’d eat cake to cheer me up.

‘I was snacking on biscuits in the green room, or eating flapjacks made by the crew when I was exhausted. I was eating so much sugar.’ 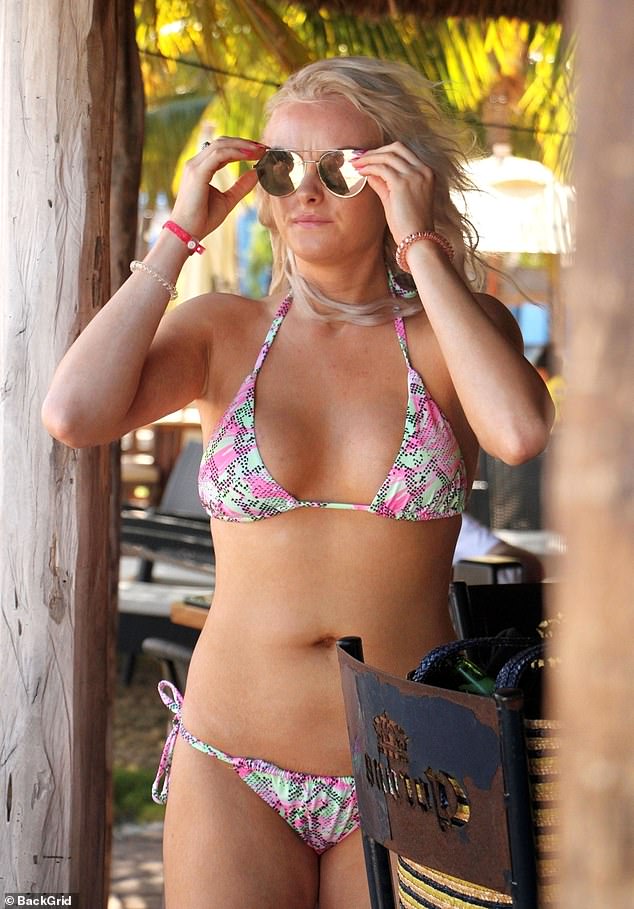 Beach babe: Her blonde locks were styled in loose waves while a radiant palette of make-up enhanced her pretty features

Katie added that she would share dessert with her co-star Rob Mallard, who plays her on-screen husband Daniel Osborne, and would ‘grab one for [herself]’ and indulge in diet fizzy drinks.

She also revealed that after a busy schedule she would be ‘too lethargic and stressed’ to make healthy meals or control her portion sizes.

‘When I got home, I’d be learning lines for the next day, so I didn’t have time to go to the gym or cook,’ Katie explained. ‘I’d try to order healthy takeaways but I’d end up ordering loads of sides, like halloumi and pots of chicken, and have it all in one go, instead of saving some for leftovers.’

However it was not until her habits began to impact her physical health that she felt she needed to make a difference.

The blonde beauty revealed ‘I was usually between a size 8-10 when ordering clothes, but I was creeping up to a size 12, which isn’t bad at all, but it was bigger than I usually am.’ 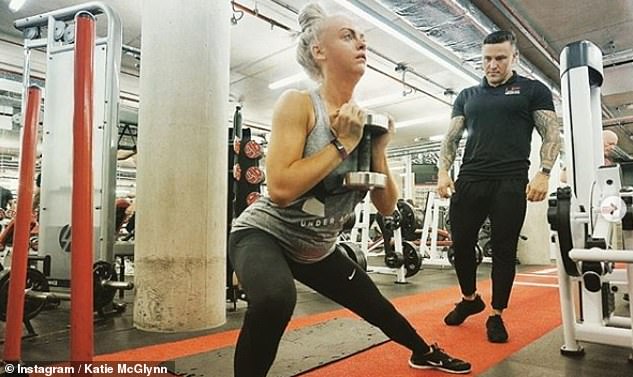 Transformation: The TV star revealed that she lost a stone in weight following her exit from the soap in October and recently shared this workout snap on Instagram

When she finished her final scenes on the ITV soap, Katie enrolled in a 12-week course with the Ultimate Performance Gym in Manchester to get back into shape.

She also enthused she’s back to her best following a brief illness over the festive period, and said she’s feeling ‘more confident than ever’ after losing a stone.

The star proudly revealed that as soon as she started lifting weights she immediately noticed a difference in her ‘hourglass’ shape, with a particular focus on her new ‘booty’ thanks to squats.

Katie played troubled character Sinead from 2013 to 2019, and admitted she’s always felt attached to the character and even kept some of her clothes from the show.

She described the process of leaving the show and watching it back to be like ‘grieving’ and eventually found solace in speaking to a counsellor.

The thespian recently revealed she’s flown to Hollywood to further her acting career after bowing out of the soap world.

Katie is set to travel to Los Angeles for pilot season and admitted she has already had many auditions since leaving Corrie, including one for a popular Netflix series.

She told the Daily Star: ‘It’s going to be an exciting year. I’ve already had so many wonderful auditions. One was for a big Netflix show, which would be an amazing opportunity. But I can’t say too much more.

‘I’m also going to LA. I’ve never been before, but I can do a really good American accent.’

The TV star added that if her plans for a Hollywood acting career work out, it would be a dream come true. 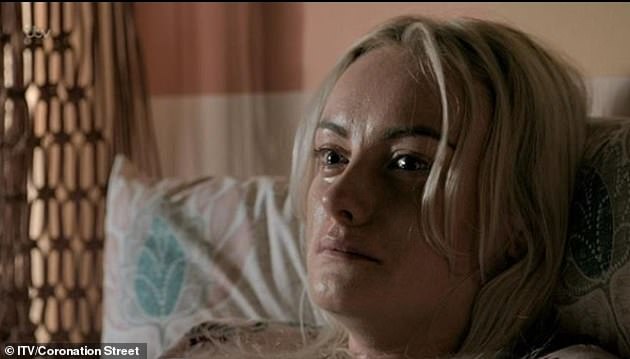 Heartbreaking: Katie played Sinead from 2013 to 2019 and in October the character lost her battle with cervical cancer (pictured on the show)