Mothers murdering their own children is a crime that’s hard to stomach.

Society says these are crimes committed by men – jealous, cheats, cowards and cruel.

It’s seemingly easier to digest that a man is capable of such atrocities against his own flesh and blood than a woman.

Katie Perinovic (right), 42, will face no justice for the murders of her children Claire, 7, Anna, 5, and Matthew, 3. 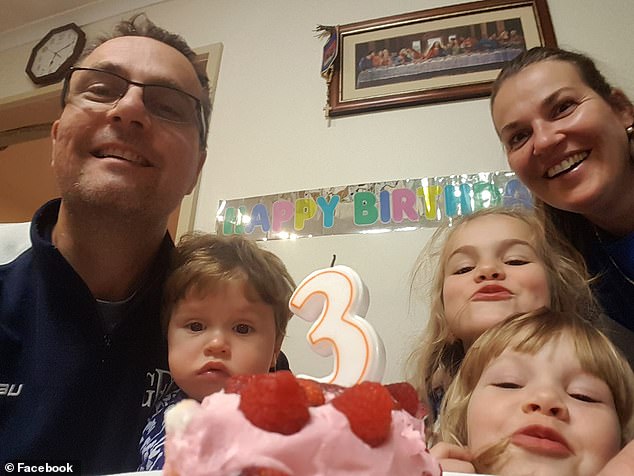 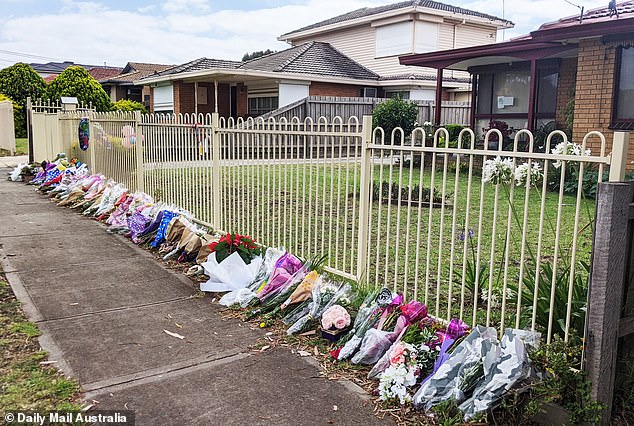 On Tuesday, flowers remain outside the Perinovic home in Tullamarine

When mothers kill their children – and they do with frightening regularity – the usual psychiatrists submit their reports outlining all of the ways the frazzled mums’ tormented brains justified the unjustifiable.

There have been numerous examples of mothers killing their own kids in Melbourne.

Akon Guode, who drove a car load of her children into a dam in 2015, was arguably the worst up until last week.

She, at least, will serve 18 years for the murders of four-year-old twins Hangar and Madit, and the infanticide of 17-month-old Bol, after driving her four-wheel-drive into a lake.

Katie Perinovic, 42, will face no justice for the murders of her children Claire, 7, Anna, 5, and Matthew, 3.

On Tuesday, the scent of flowers wafted through the air outside the Tullamarine home where she so cruelly dispatched her little ones.

Melburnians have been dropping flowers outside the large fence of the Tullamarine property since news of the tragedy broke on Thursday.

From behind the fence – no doubt erected to keep the children safe – a small plastic chair belonging to one of the little girls remains perched under the verandah.

The large gates of the property remain shut, with no sign of their shattered father Tom Perinovic. 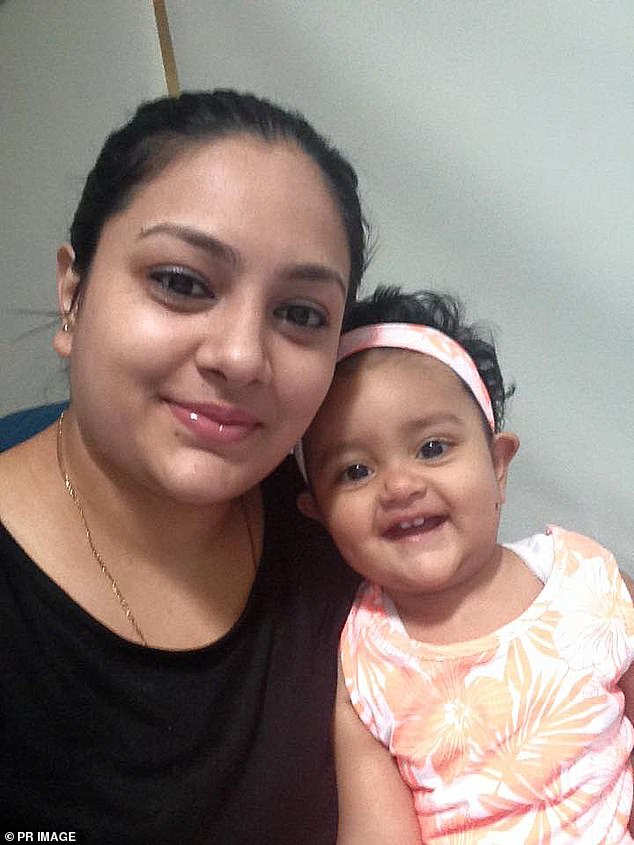 15-month-old Sanaya Sahib was killed by her mother Sofina Nikat. 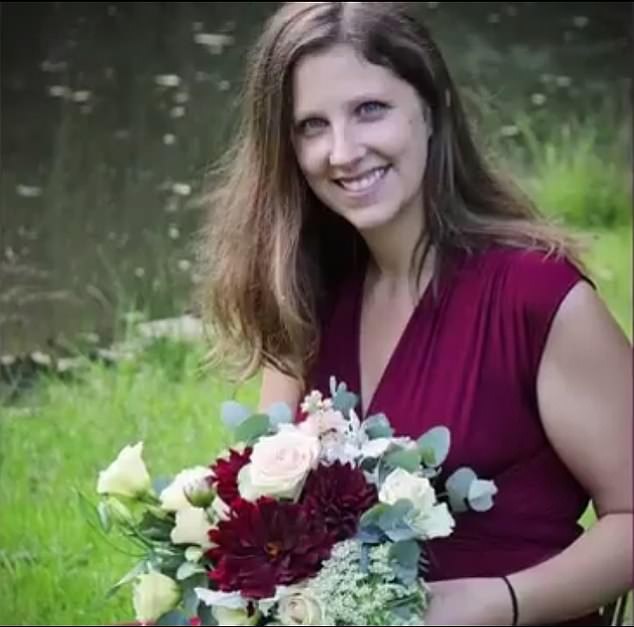 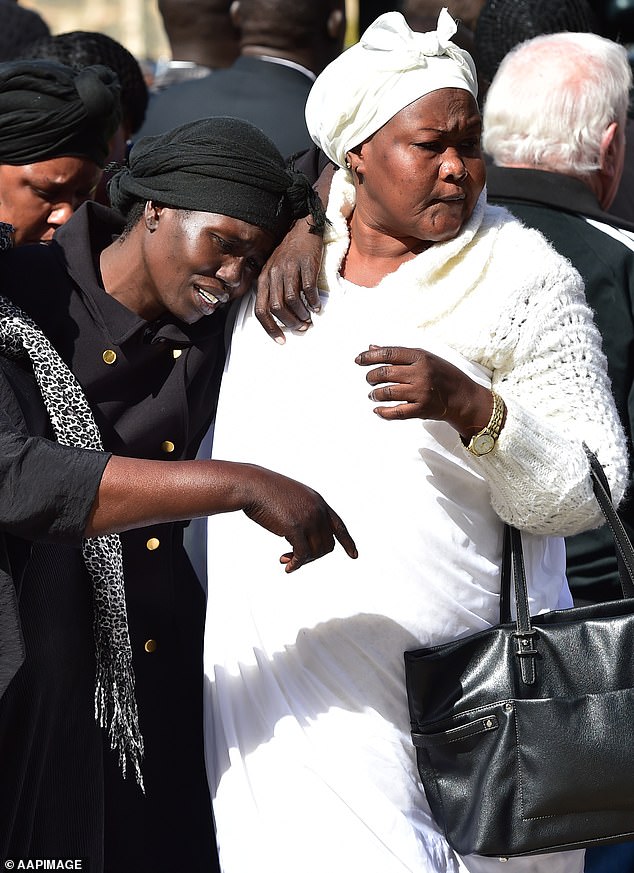 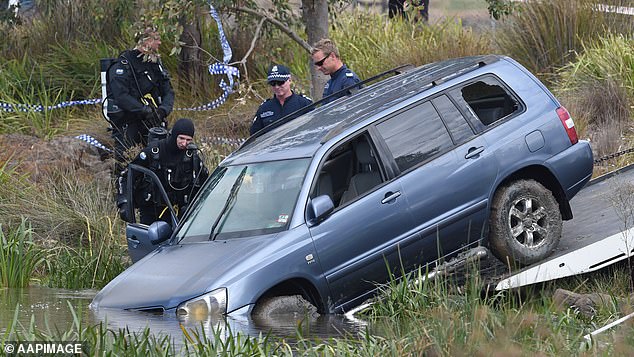 When reports surfaced of the murders last week, it was clear he had been the man ‘helping police with their inquiries’.

Revelations that he was completely innocent sent shockwaves across the nation.

The scene had been described by police as ‘gruesome’, giving rise to suggestions the children may have been stabbed to death.

Social media lit with comments from a public struggling for answers.

‘How could a mother do that to her kids?’ they asked.

‘And why when a woman commits such an atrocity are people so quick to make excuses for them?’

A month earlier Melburnians had been rattled at news that a young family had been killed in a horror fire in Melbourne’s west.

While fingers immediately pointed at the father, it was a woman who was charged with the crime.

Over the past two decades Australians have been horrified by numerous child murders at the hands of their mothers.

While many cannot be reported, killers such as Kathleen Folbigg, Tanja Ludwig, Ashlee Jean Polkinghorne and Keli Lane all made national news for killing their own.

Folbigg killed her four children, Lane – a former Australian water polo player and teacher – was convicted of the 1996 murder of her newborn baby Tegan, and Ludwig died with her two-year-old daughter after jumping off a cliff in 2019. 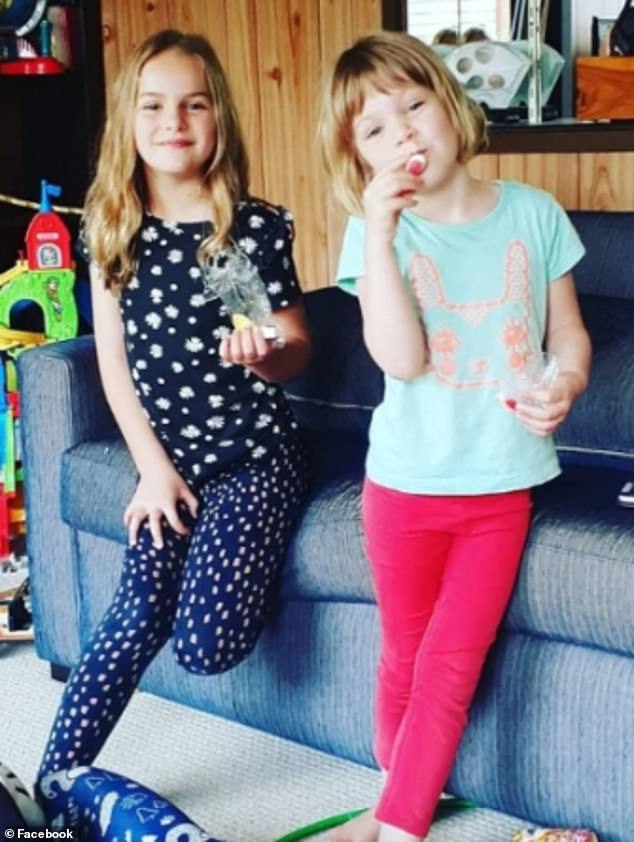 Katie Perinovic murdered her daughters Claire, 7, and Anna, 5 on Thursday 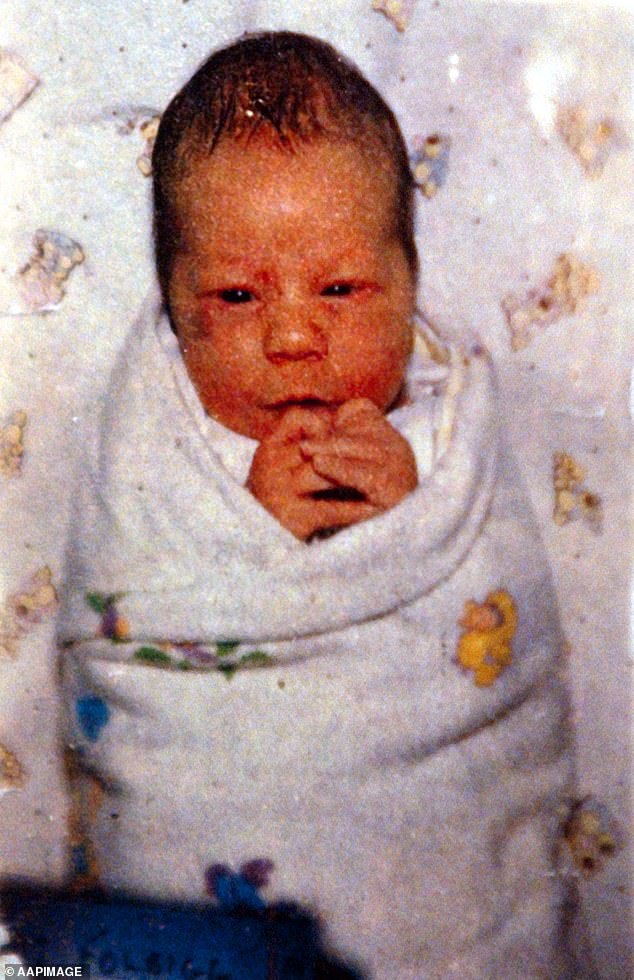 Caleb Folbigg was killed by his mother Kathleen. He was the first of three of her own children she killed over a 10 year period 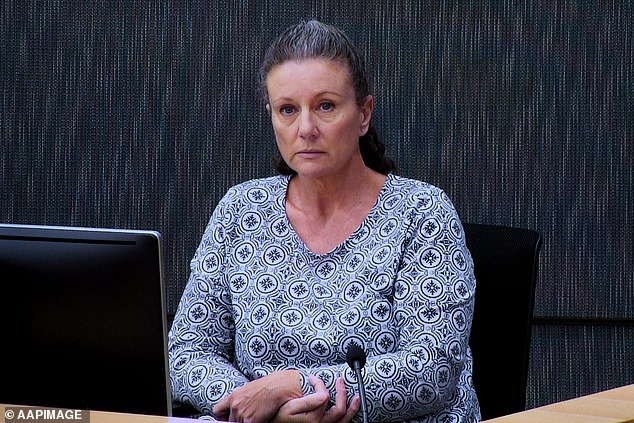 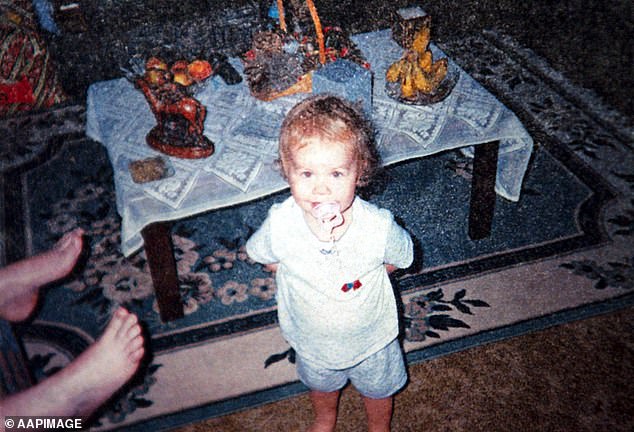 The disturbing figure equates to about one child every two weeks.

Of those, 133 were killed by their mothers.

Another 81 were killed by their fathers, with the remaining killed by stepfathers.

Four-year-old Chloe Valentine died from at least 39 injuries to her body after being repeatedly forced to ride a 50kg motorbike by her mother, Ashlee Jean Polkinghorne.

In Melbourne, before Katie Perinovic and Akon Guode there was Donna Fitchett.

The qualified nurse drugged and murdered sons Thomas, 11, and Matthew, 9, at their Balwyn North home in what she described as her ‘greatest act of love’.

‘You were their mother. Your responsibility was to nurture, care for, love and protect them,’ she said.

Fitchett admitted she murdered her children but pleaded not guilty by reason of mental impairment.

She had claimed her major depressive disorder had led to their deaths because she intended to take her own life and felt she could not leave the boys behind.

Justice Curtain ordered her to serve 18 years before she is eligible for parole.

More recently, Sofia Nikat smothered her infant daughter before dumping her body in a creek. 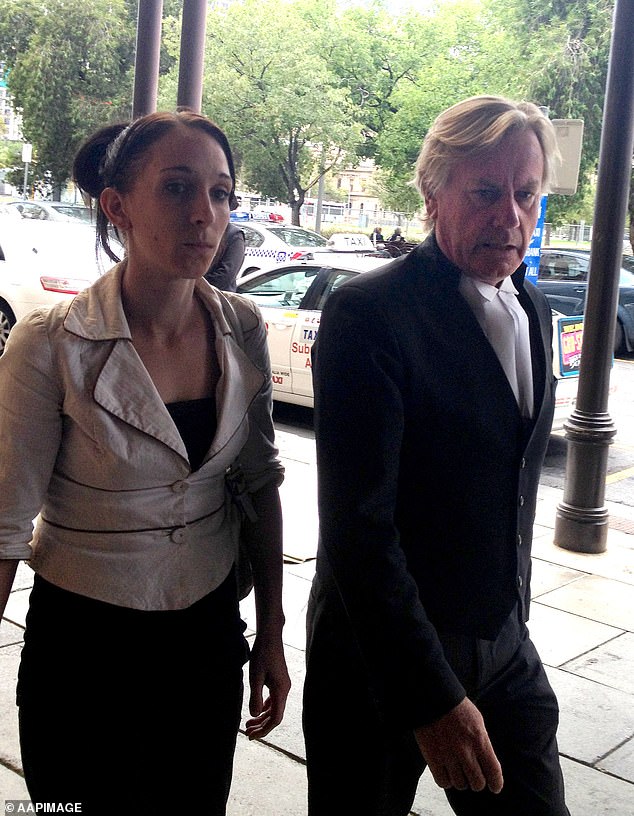 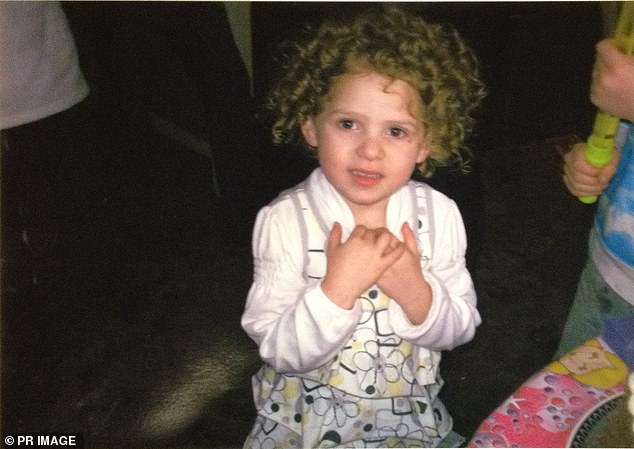 Chloe Valentine, aged 4, died when her mother Ashlee Jean Polkinghorne, aged 22, and her partner Benjamin Robert McPartland, 28 repeatedly put her on a 50-kilogram motorbike in the backyard of the family home

The Supreme Court of Victoria heard she was suffering depression when she suffocated her 15-month-old, Sanaya Sahib, in a park in Heidelberg West in 2016.

Nikat was initially charged with murder, but it was later downgraded to infanticide, which carries a maximum penalty of just five years in jail.

Justice Lex Lasry sentenced her to a 12-month community corrections order and cut the killer loose.

In 2017, on the steps of Victoria’s Supreme Court, Sanaya’s aunt, Zahraa Sahib, said they were disappointed and upset by the outcome.

‘We had no justice for her death,’ she said.

Guode had been suffering post-traumatic stress and depression when she murdered her children, but gave no reason as to why she did it.

She was originally sentenced to 26 years, but last year successfully argued the sentence was ‘manifestly excessive’ and was resentenced to 18 years.

For Tom Perinovic, and the families of countless others, the sentence will last a lifetime and the questions will likely remain unanswered.