The mother-of-five insisted she wasn’t in Sin City to ‘party’ and only flew to the States for a holiday and to see Carl’s parents who live there.

Former glamour model Katie, 43, failed to mention her impending wedding to Carl, 32, while speaking live on Instagram alongside Cami, 34, claiming she was in Vegas to see the sights, including the Grand Canyon.

Katie’s comments came after MailOnline revealed she could be kept away from some of her children if she marries Carl in Vegas after ex-husbands Peter Andre and Kieran Hayler filed legal letters expressing concerns for their children Junior, 16, and Princess, 14, and Jett, eight, and Bunny, seven.

In her video, Katie claimed: ‘I’m not here to party, I’m not interested in the partying side at all’ before posting from model Cami’s house, where she was sat on the sofa eating homemade pumpkin cheesecake.

Speaking live on Instagram stories on Thursday night at 10pm Vegas time, Katie revealed her plan is to relocate to Vegas with her children and star in a new show that sees Cami, who works in real estate, find her a property.

Katie and Cami reminded their fans they once shared a bed together during their stint on Celebrity Big Brother in 2015. 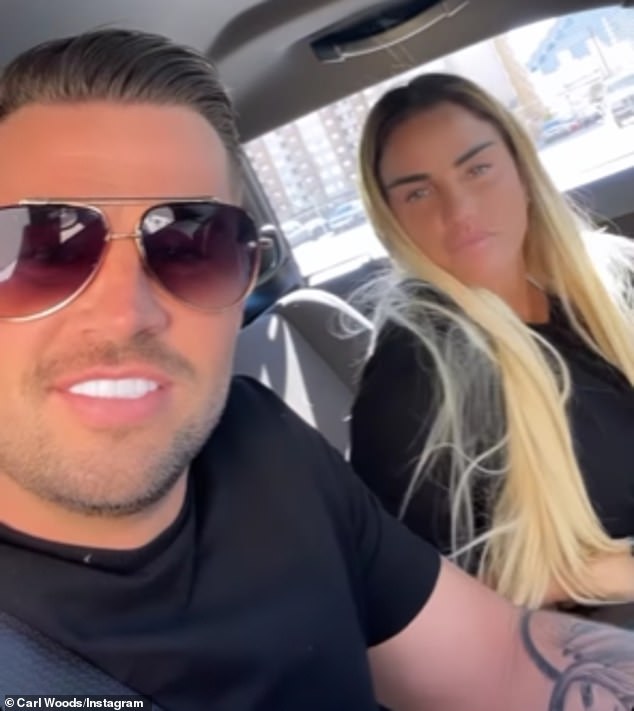 Taking it easy: The mother-of-five insisted she wasn’t in Sin City to ‘party’ and only flew to the States for a holiday and to see Carl’s parents who live there

Cami later shared an Instagram story of herself and Katie singing the lyrics to Saweetie track Best Friend.

She said: ‘That’s my best friend, she’s a real bad b****. Welcome to Vegas’ while Katie kissed her on the cheek and the pair snuggled up together on the sofa.

Alongside an image of the pumpkin pie, she made Katie, Cami said: ‘It looks like f***ing dog s*** but it is pumpkin cheesecake, I promise you, you will have an orgasm in your mouth and p***y.

Katie’s comments came after a friend of her ex Kieran branded Katie ‘a selfish mother’ for putting herself first rather than focussing on the relationship with her family, who they claim have been kept in the dark about her fourth marriage. 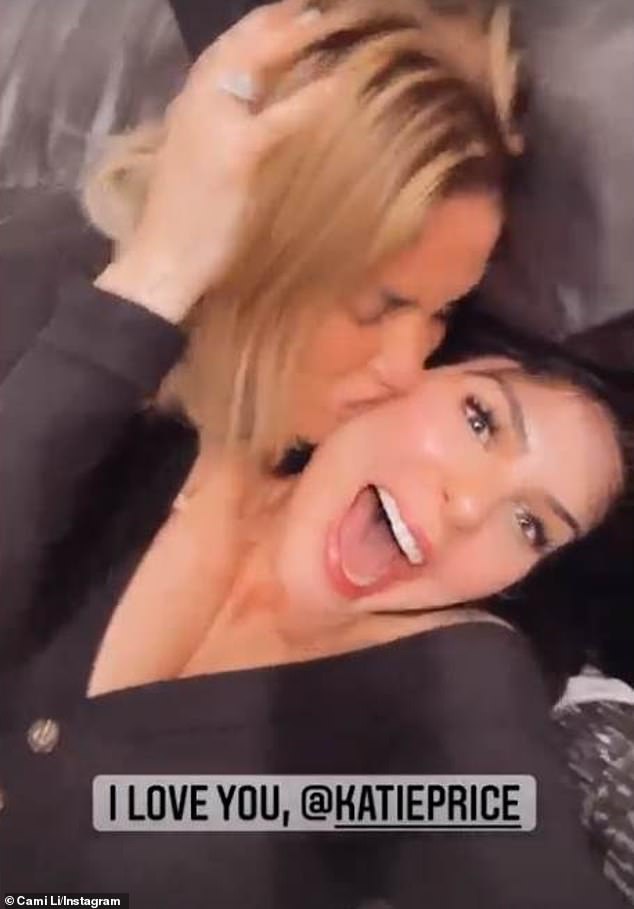 Fun times: Former glamour model Katie, 43, failed to mention her wedding to Carl, 32, while speaking live on Instagram alongside Cami, 34, claiming she was in Vegas to see the sights 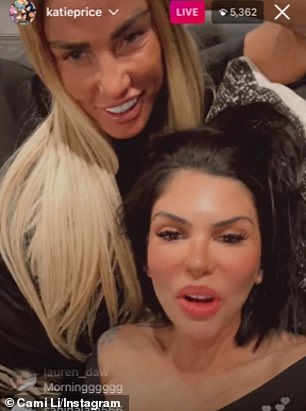 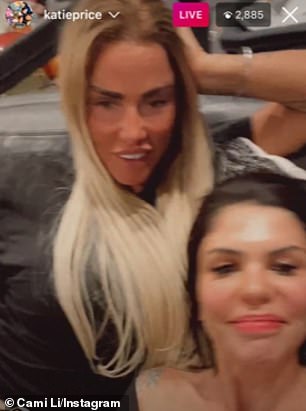 Sensible: In her video, Katie claimed, ‘I’m not here to party, I’m not interested in the partying side at all’ before posting from model Cami’s house’ 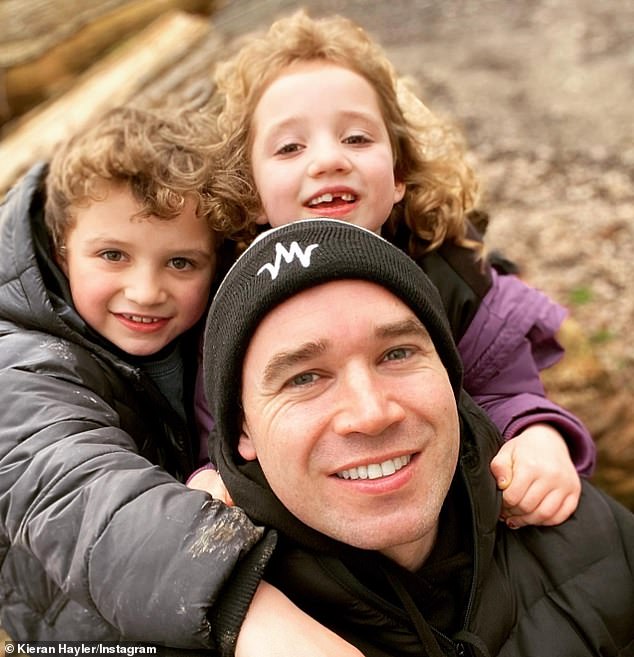 ‘Selfish mother’: A friend told MailOnline Kieran Hayler and her first husband Peter Andre have sent legal letters raising concerns for their children including Jett and Bunny (pictured) if the model marries Carl

Katie posted on her Instagram story that she feels ex-husbands ‘Peter and Kieran have contributed to the state of my mental health’ and asks them both to stop using their children as a ‘pawn because it isn’t fair.’

MailOnline understands that Katie plans to get married in the next couple of days and will broadcast the nuptials on her YouTube channel.

However, the source believes it is unlikely Katie will have the time to buy a white gown for the occasion, adding ‘they wouldn’t be surprised if she walks down the aisle in some prostitute’s dress or a short skirt and high heels, which is so her style right now.’

Earlier today, Katie was pictured drinking what appeared to be an alcoholic cocktail despite the fact she was meant to have taken a course at The Priory following her drink drive charge at the end of September.

Kieran’s friend added that they believed Katie would have ‘laid low’ following the charge in which she is due to be sentenced on December 15 and questioned how she was allowed to go to America given ‘how strict’ rules are allowing tourists into the country.

They’re also surprised Katie has agreed to have a second Vegas wedding after she married her third husband Alex Reid, 46, in Sin City 10 years ago. 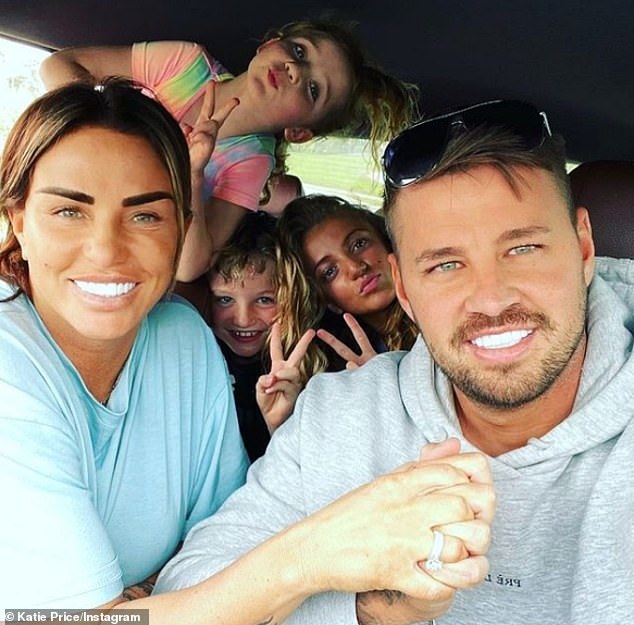 ‘All she cares about is him’: The pal branded Katie ‘a selfish mother’ for putting herself first rather then focussing on the relationship with her family, who they claim have been kept in the dark about her fourth marriage (Katie and fiancé Carl pictured with Princess, Jett, and Bunny)

Friends close to Kieran said he had no idea she was flying to America or getting married to Carl but as soon as he saw her in Vegas, he knew she would be walking down the aisle ‘because she’s obsessed with this romance.’

However, the pal doubts this marriage will last very long, and won’t receive backing from her close family members including her mum, Amy.

They said: ‘Their marriage will be over before it’s even got going, which will be embarrassing for them. I would love to know what her mum thinks, what Amy f***ing Price thinks.’

She filmed herself and fiancé Carl on a 3am drive hoping to fill their stomachs, explaining that ‘due to the time difference’ they were hungry as their eating habits were very much still based on UK time.

However, the couple opted against a posh dinner or stodgy fast food. Instead, Katie proudly posted a picture of a giant bag of beef jerky – a high-protein diet staple.

The soon-to-be newly weds are already enjoying their Vegas getaway after Carl rented a Dodge Challenger and visited the Grand Canyon.

Katie and Carl, who calls Vegas his ‘second home’, had breakfast together on what could be the eve of their wedding day at Grand Canyon Skywalk at Eagle Point. 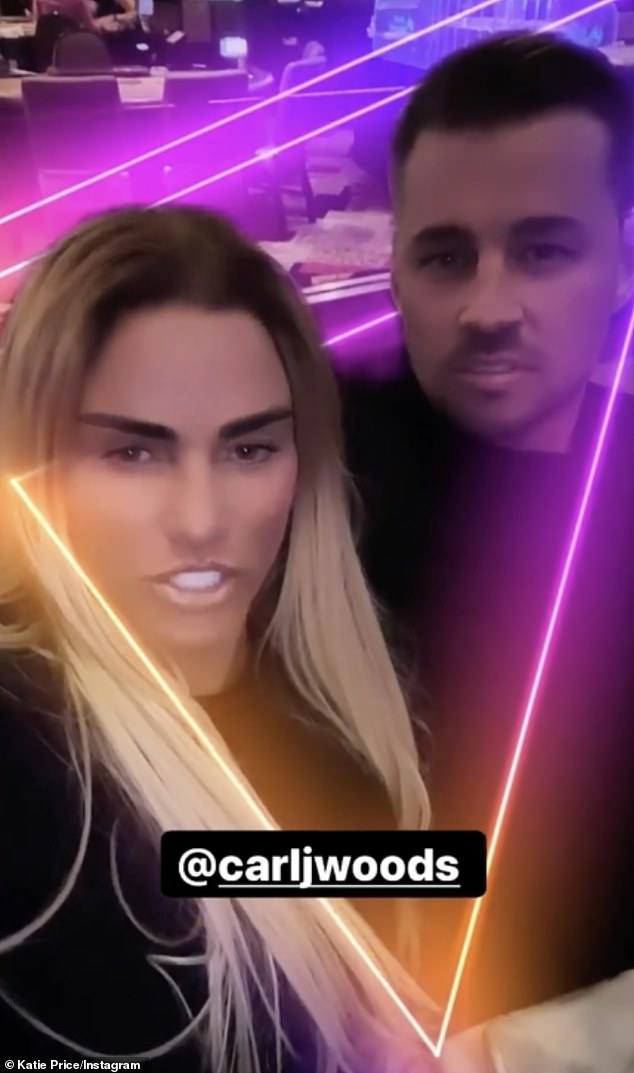 ‘Favourite place ever’: Speaking on her Instagram story, Katie said: ‘We are in Vegas baby, and he’s showing me more to Vegas than what you think, no, not partying, the fun bits you can do in Vegas’