Katie Price has begged her followers for help as she begins the search for a mobility scooter and wheelchair ahead of her arrival back in England.

The glamour model, 42, was rushed to hospital in Turkey on Wednesday, after breaking both of her feet and ankles in a horror accident, and took to Instagram Stories on Friday morning to give fans an update.

Sharing a video of herself in a wheelchair, with her lower legs in casts, Katie revealed that doctors have told her it will take 3-6 months “or even longer” for her to make a full recovery.

Please help! Katie Price, 42, has begged her followers for help as she begins the search for a mobility scooter and wheelchair for her arrival back in England

Speaking to camera, Katie said: ‘Hi guys, does anybody know, or can someone get in contact where I can hire a mobility scooter and a wheelchair that I can use, for when I get back?

‘Because, I’m not gonna be able to walk. Doctors have confirmed three to six months, or it could be longer.

‘So, I need to get around on a mobility scooter and a wheelchair… Let me know, inbox me. Thank you.’

Looking understandably fed up in the clip, while asking for assistance following her accident, Katie captioned the video: ‘Please help!’ making her plea for help crystal clear. 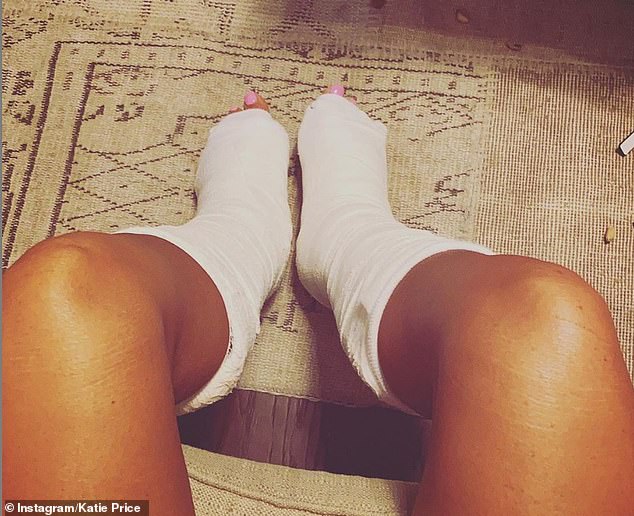 Shock injury: Katie shared a picture of her bandaged feet to Instagram on Thursday evening, and revealed she has to have an operation and pins placed in her feet 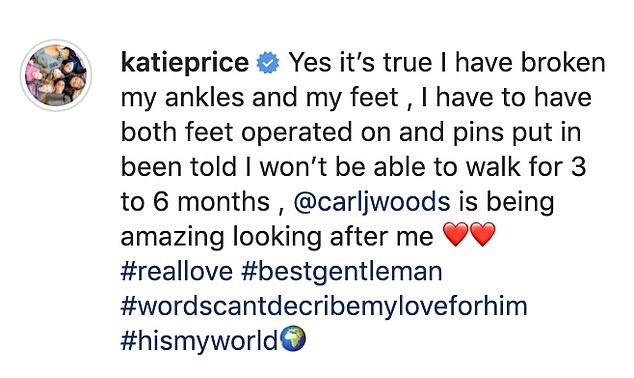 Taking to Instagram on Thursday evening, she shared a picture of her bandaged feet, confirming she will need to have pins in her feet and won’t be able to walk for three to six months.

According to The Sun, Katie, who is said to be in ‘excruciating pain’, spent the night in hospital on Wednesday after jumping off a wall at theme park Land of Legends in Belek, Turkey, and fracturing both heels in the process.

The star shared a photo of her bandaged feet to Instagram and revealed she will have to undergo an operation and have pins placed in her feet. 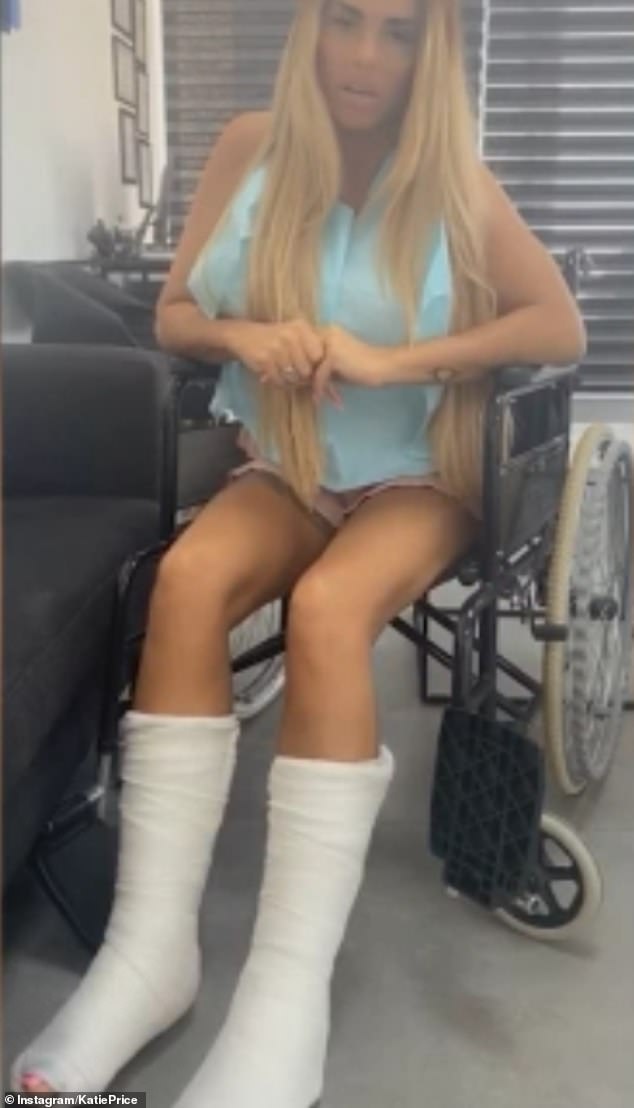 She wrote: ‘Yes it’s true I have broken my ankles and my feet, I have to have both feet operated on and pins put in been told I won’t be able to walk for 3 to 6 months ,

A source told The Sun: ‘This is the worst thing that could have happened to Katie. She has spent all night in A&E in agony with a hairline crack through both of her heels.

‘The pain is excruciating – but she has a bigger nightmare to come, trying to look after five children while unable to walk.’

‘Katie is expected to cut her holiday short and fly back to the UK for further treatment,’ a spokesperson for the star told the publication.

Katie’s spokesman said: ‘I can confirm Katie has incurred an injury. It was sustained by her own doing when visiting a family amusement park with her children, Carl and friends.

‘Katie is expected to cut her holiday short and fly back to the UK for further treatment.’

Just hours before her shock accident, Katie was pictured smooching shirtless beau Carl Woods, 31, during a pool day in Turkey, on Wednesday.

The loved-up pair jetted off to Turkey earlier this week, with two of Katie’s five children.

The glamour model’s son Junior, 15, and daughter Princess, 13, were taken on the family holiday, but she had to leave son Harvey, 18, at home following his recent hospital stint. 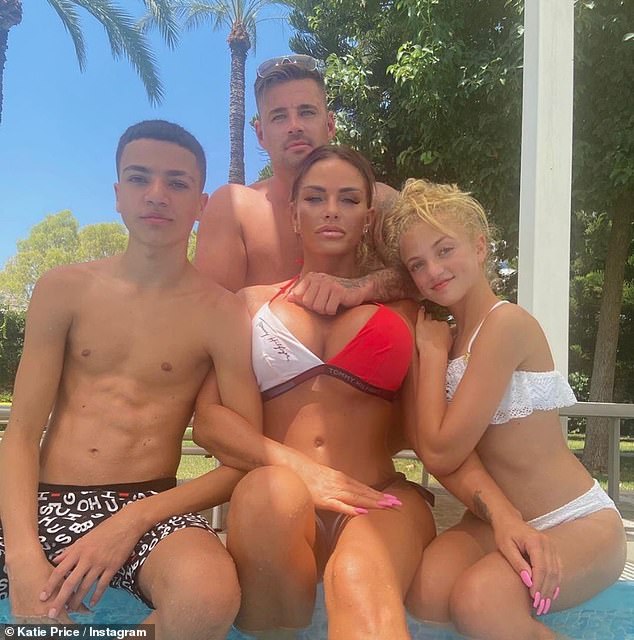 Getaway: Katie posed in a sweet family snap with beau Carl, and kids Junior and Princess on Wednesday, before they ventured to the theme park where she fractured both heels

The bikini top comprised one red triangle and one white triangle, while the black bikini bottoms featured tie-sides.

The CBB star styled her ombré locks into a messy knot at the nape of her neck, and wore a heavy make-up look, complete with a glamorous pair of false eyelashes.

Carl displayed his heavily tattooed torso as he topped up his tan, wearing just a white pair of board shorts.

The mother-of-five is said to be ‘heartbroken’ that Harvey cannot come with them on holiday as planned.

The media personality has Harvey from a relationship with his estranged father Dwight Yorke, 48, Junior and Princess with singer Peter Andre, 47, and Jett and Bunny, five, with ex-stripper Kieran Hayler, 33.

Harvey was rushed to hospital leaving Katie and the family deeply concerned, but was given the all clear to return home.

A source told The Sun: ‘Doctors told Katie it would be better for Harvey’s health if he stayed at home. She’s heartbroken but of course she’ll take doctors advice.

‘Harvey will stay at home with his carer and Katie will still go – she’s taking Princess and Junior and some of their friends and she didn’t want to cancel their holiday and let them down, especially as Princess’s birthday party was disrupted by Harvey going to hospital.’

Katie recently revealed eight doctors fought to save Harvey’s life after suffering from breathing complications and his temperature rising to 42 degrees.

A source told MailOnline: ‘Katie is delighted, the call was made this afternoon shortly after lunch to discharge Harvey.

‘She has been overwhelmed already by well wishers, the staff, doctors and nurses are delighted but sad to see Harvey go – he is such an amazing spirit and character.

The businesswoman is said to believe her boyfriend Carl is ‘the one’ after he supported her while Harvey was sick in hospital.

She was by her son’s side as he fought for his life over a 10-day period in intensive care before he was discharged.

According to the publication, the blonde has told her friends that the one-time reality star is her ‘rock’.

An insider said: ‘The past week has been one of the worst Katie has ever gone through in her life. But Carl, from the very first moment, has been amazing. He’s been there for Katie to cry her heart out to and he’s always made sure she’s OK.’

Moreover, Katie recently told new! that while they haven’t said the L-word yet, things are moving very quickly.

She said: ‘He makes me feel alive, safe and happy. He’s like a dream come true and ticks every box.’

The former Loose Women panellist, who split from personal trainer and former fiancé, Kris Boyson, 31, earlier this year, has said her mother Amy finally approves of this romance following a tumultuous time.

She added: I honestly feel like I’m punching with him. My mum and close friends are really happy for me. I’m telling you, he has all the right attributes to be a keeper.’

Katie said that mutual friends set them up and that she has known Carl for two years and he has ‘admired her from afar.’

And she claims Carl does not want to be in the public eye, despite his appearances on current ITV2 reality show, Killer Camp and Love Island in 2016.

It’s been a tough time for the star who checked into the Priory in January this year for four weeks after admitting to taking cocaine to ‘numb the pain’ following a series of personal woes.

A source close to Katie said: ‘Katie is the happiest I’ve seen her in a long time. She feels really good in herself, secure and she’s smiling again.’