Katie Price has enjoyed a private helicopter ride with her family as she kick starts her fourth trip abroad in two months – shortly after she was unknowingly embroiled in an online scam.

The model, 43, fled the UK for sunny Saint Lucia with her family on Friday after being left ‘absolutely devastated’ that her fans had lost thousands of pounds because she promoted a conman’s business on Instagram.

After arriving on the Caribbean island, Katie’s fiancé Carl Woods, 31, shared selfies with her daughter Princess, 14, and filmed her son Harvey, 19, as they prepared to fly in a helicopter.

What a treat! Katie Price has enjoyed a private helicopter ride with her fiancé Carl Woods and children Harvey and Princess as she kick starts her fourth trip abroad in two months

Carl captured a helicopter on a runway as the former Love Islander, Katie, Princess and her son Harvey made their way towards it.

‘Harv’ what do you reckon, on a helicopter?’ he said to her eldest child who excitedly responded: ‘Yes!’

‘I bet you can’t wait!’ Carl added. Flight attendants gingerly carried their luggage to the aircraft before loading it on board.

Katie grabbed Harvey’s top and guided him towards the helicopter entrance doorway while her fiancé gave an animated expression towards his camera. 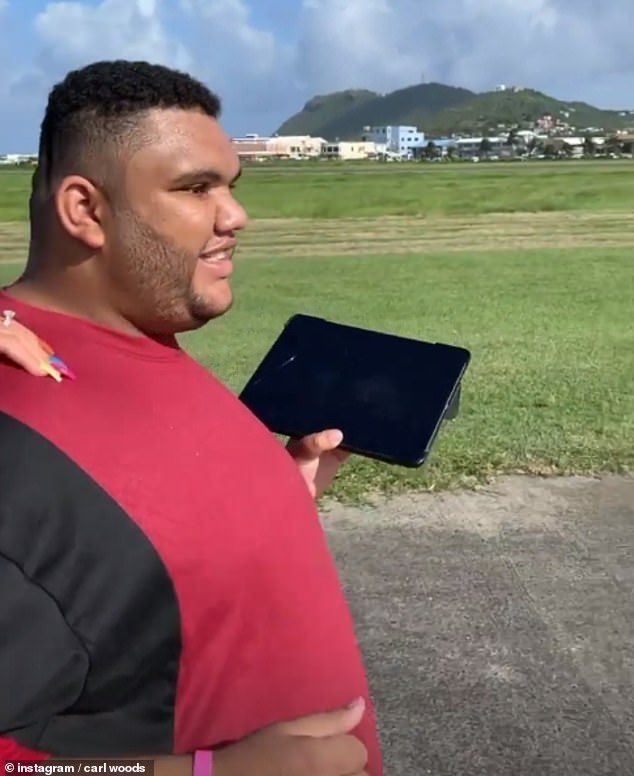 Exciting: The clip shared to Instagram shows the teenager preparing to get onto the helicopter

Later that day, he captured the view from inside the aircraft as they prepared to land at an unknown location on the island.

The Saint Lucia trip adds to an impressive line-up of international destinations visited by Katie and Carl in recent months after they visited Portugal, Turkey and Spain.

At the end of May, Katie and Carl jetted to Portugal for a relaxing break before they headed to Turkey for her major cosmetic surgery.

On June 15, Katie had liposuction, a Brazilian bum lift, lip and eyelid surgery. She later defended this jaunt as a ‘work trip’ because it will feature on her reality show. 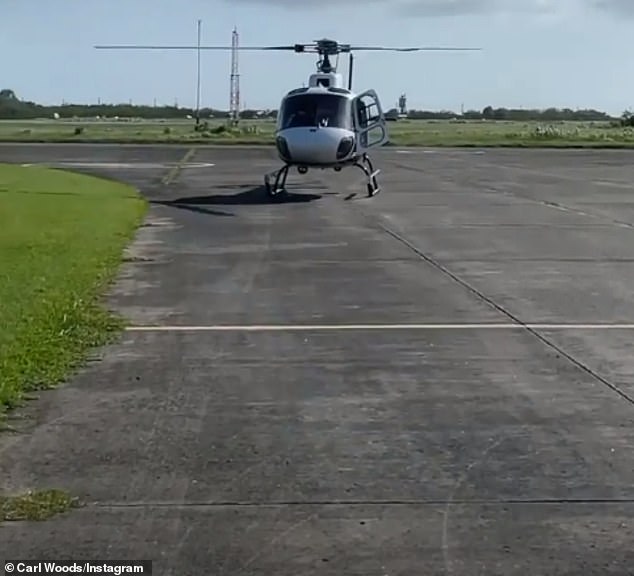 New ride: Without commenting on recent news that Katie’s fans had lost thousands of pounds because she promoted a conman on Instagram, Carl captured a helicopter on a runway 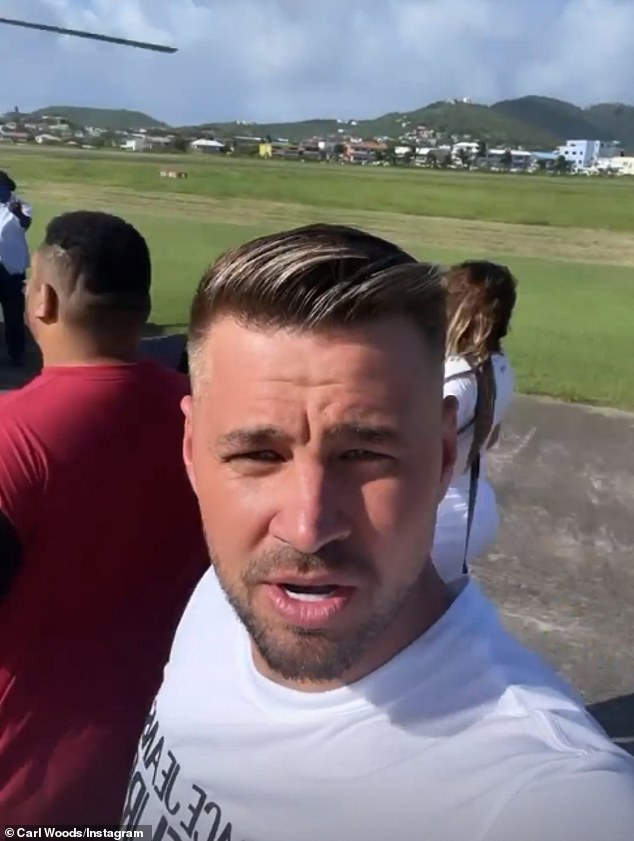 Fly away: The former Love Islander also seemed impressed at the luxury mode of transport 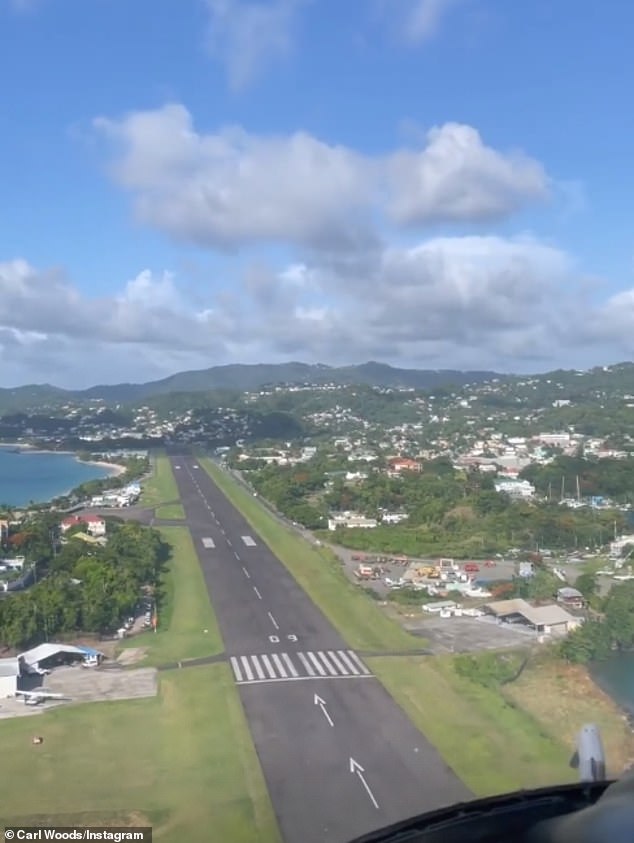 Don’t be afraid of heights! Later that day, Carl captured the view from inside the aircraft as they prepared to land at an unknown location on the island

It was then reported on June 23 that Katie and Carl had swapped red list Turkey for sunny Spain and were staying in a luxury villa while she recovered.

However, the family visit to Saint Lucia is the couple’s first long haul holiday since they visited the Maldives last October.

In another snap taken during their latest trip, Carl can be seen posing with Katie’s eldest daughter.

Carl was seen rocking a khaki vest which exposed his arm tattoos while Princess sported a grey top. The 14-year-old’s naturally curly tresses tumbled down as she delivered a pout to the camera. 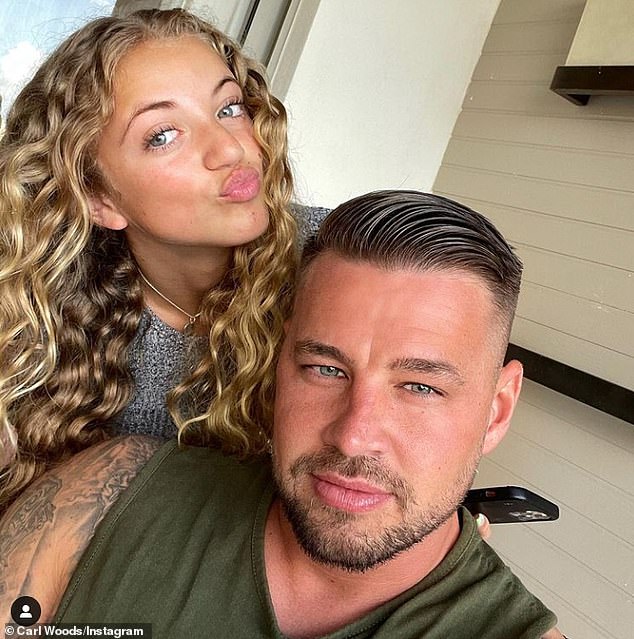 Selfie time: He also posed for a picture with Katie’s daughter Princess, 14, during their travels

Hard at work: The Saint Lucia trip adds to an impressive line-up of destinations visited by Katie and Carl in recent months (pictured with at the airport ahead of flying to Turkey) 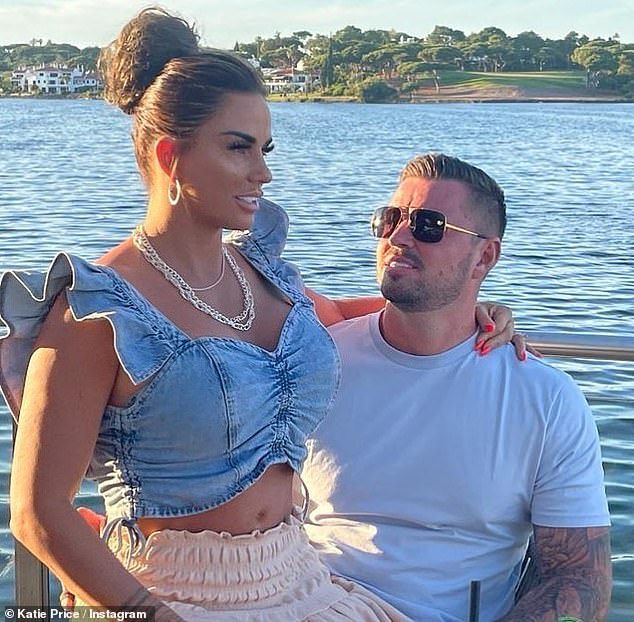 Relaxing: They appeared to be in great spirits while lapping up the sunshine in Portugal in May

Noting the similarity to her model mother, Carl penned on the Instagram snap: ‘Definitely her mother’s daughter @katieprice @officialprincess_andre #minime.’

The last-minute holiday comes after Katie promoted the rogue Forex trader ‘Josh Chandler’ on her Instagram.

She was paid an estimated £3,000 without declaring they were sponsored posts and fans were ultimately conned by the individual, having spent hundreds in the scam to receive nothing back.

Ahead of her holiday, the model took the opportunity to set the record straight with her fans by posting a lengthy statement on her Instagram stories.

She lamented: ‘I am absolutely devastated to receive the news about this rogue trader Josh Chandler, if that’s even his real name 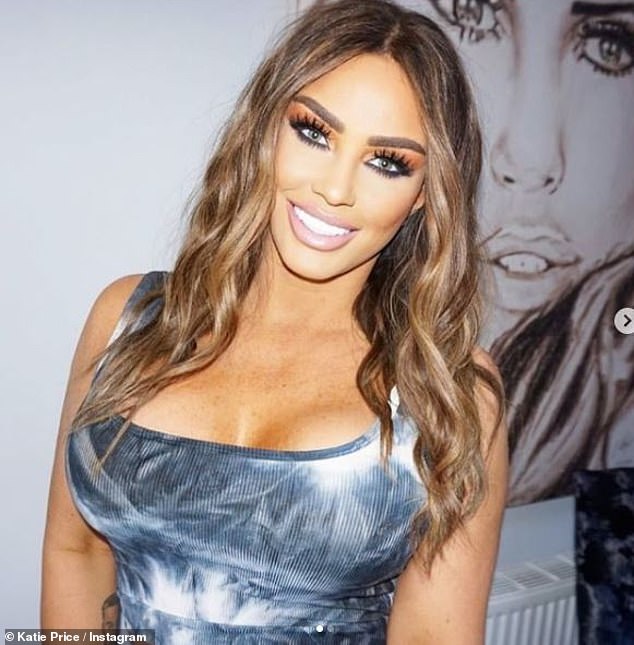 Shocking: Katie promoted the rogue Forex trader ‘Josh Chandler’ on her Instagram and fans were conned by the individual, having spent hundreds in the scam to receive nothing back

‘He has conned not only me but my family, friends, loyal fans and supporters.’

‘I want to thank Action Fraud for reaching out, for working with me in investigating this awful situation.’

Katie continued: ‘This is precisely why Harvey’s Law is yet again so relevant, if we had the much needed support channels in place and required by law to provide ID’s to be set up on social Media accounts then people like this so called Josh Chandler would not be able to hide themselves, target venerable people [sic].

‘My heart goes out to all those that this conman’s deceit has affected. I pledge to you all I will seek justice,’ Katie signed off as she hopped on her flight abroad.

The model’s representatives told the MailOnline: ‘This has hit Katie hard, mentally, she needs some down time before embarking on setting out in putting a stop to these parasites that poach on vulnerable and honest souls.’ 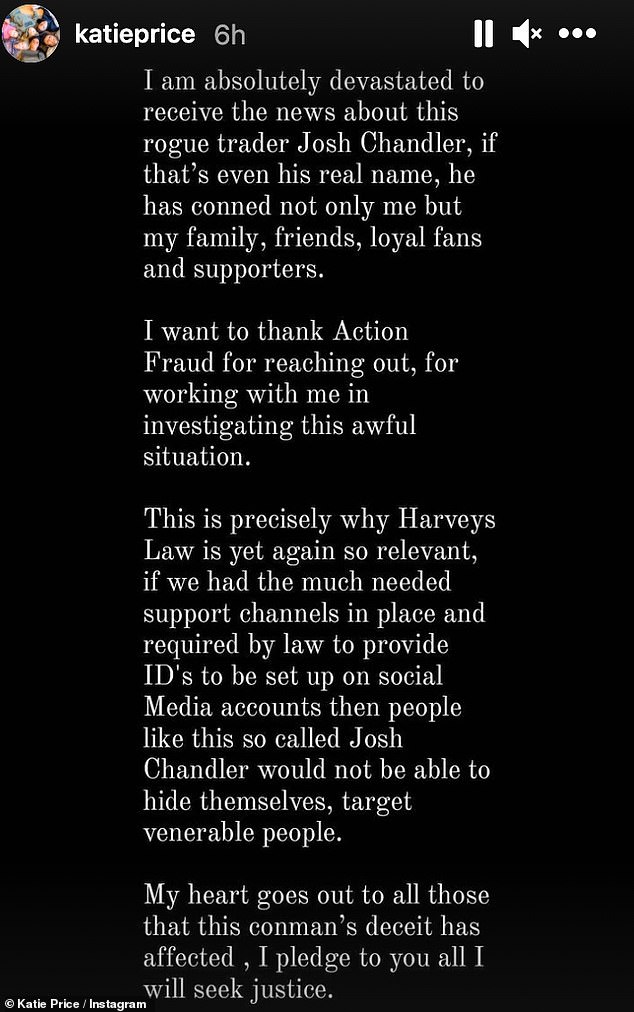 ‘I will seek justice’: Ahead of her holiday, the model took the opportunity to set the record straight with her fans by posting a lengthy statement on her Instagram stories

The statement comes after it was revealed that Katie’s Instagram followers had been conned out of thousands of pounds by the rogue trader she promoted.

The model was paid to advertise the supposed money-making skills of Forex trader ‘Josh Chandler’ to her 2.6million followers.

Kate Dalrymple, 40, a nurse from Newcastle Upon Tyne, said she lost £825, nearly a month’s wages, to the scheme.

The nurse reported the scam to Action Fraud and at least five others were conned into sending money to the scam.

Katie Price’s team said the star was also conned and had no idea it was a scam.

Online users have been warned about rogue Forex traders who promise huge profits for small investments.

But many do not have the necessary accreditation or qualifications to offer these services, which makes them illegal and means aspiring customers risk seeing their profits flop.

Forex trading allows you to speculate on the changes in the strengths of different currencies over time and buy and sell them against each other.

Ms Dalrymple told The Sun: ‘I feel so ­stupid. But I was always a fan of Katie’s. I thought she was a good mother and related to her.

‘Now I feel so let down and embarrassed. How could she put her name to this?’

The nurse said she saw Katie promoting Josh on her Instagram Stories and believed it to be genuine.

She said: ‘My bank, Lloyds, even called me to flag that it looked like fraudulent activity but, again, because Katie Price had endorsed it, I told them it was genuine.’

Once she realised what had happened, Ms Dalrymple messaged Katie on Instagram but says she never received a reply and is ‘disgusted’ by her behaviour.

Katie praised ‘Josh’s’ services at least twice on her Instagram Stories where she encouraged her followers to invest in order to make a ‘safe income’. 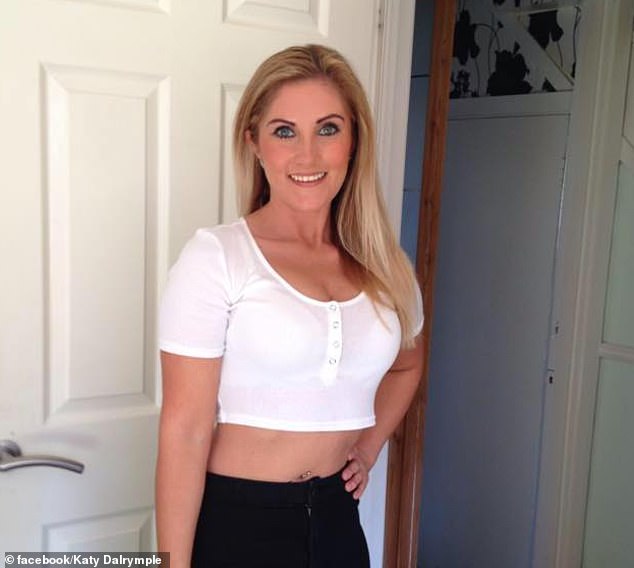 Shocking: Kate Dalrymple (pictured), 40, a nurse from Newcastle upon Tyne, said she lost £825, nearly a month’s wages, to the scheme

It is believed the glamour model made as much as £3,000 each time she promoted him.

Last month, Katie said in an Instagram post still visible on ‘Josh’s’ profile: ‘Hey guys, so I want to tell you about a friend of mine called Josh.

‘He’s amazing at what he does and you may have heard about him or seen him on other media sites, if you’re interested in securing a new, safe and good income… ‘

Lloyds Bank say they are investigating the payment made by Ms Dalrymple but believe they will not be able to retrieve her £825.

In her messages to ‘Josh’, she was asked to give her bank details, date of birth and copy of her driving license to open an account on crypto.com. 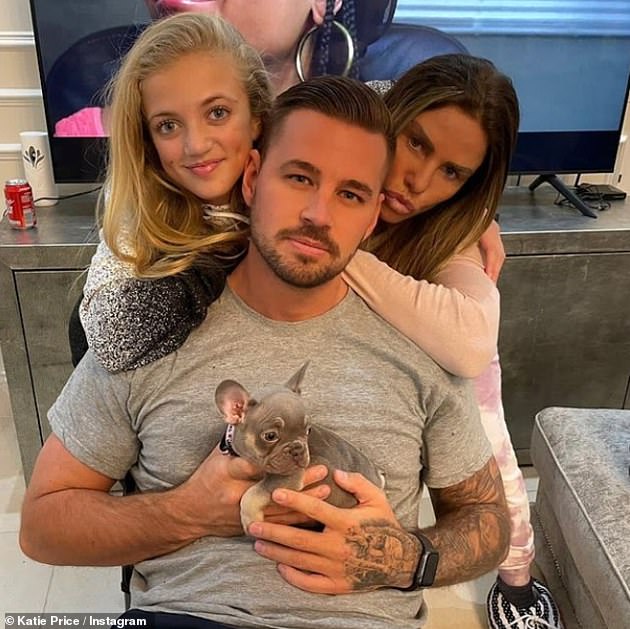 Oh dear: Katie praised ‘Josh’s’ services at least twice on Instagram where she encouraged her followers to invest in order to make a ‘safe income’ (pictured with Carl and Princess)

The mother-of-one was then asked to transfer increasing amounts of money.

She became concerned and asked for reassurance that it wasn’t a scam, to which ‘Josh’ replied: ‘Katie Price does not promote fraud.’

When Ms Dalrymple grew worried and demanded to know what had happened to her money, ‘Josh’ made vile threats to her four-year-old son, adding: ‘Clearly u deserve to be scammed you racist motherf****r.’

It is forbidden to post sponsored content on Instagram without having disclosed it using the hashtag #ad, the Advertising Standards Authority say, but Katie did not declare that she was advertising the scam and being paid for it.

It is not the first time that Katie, who was declared bankrupt in 2019, has promoted Forex traders online.

The star, who still owns an estimated £3.2million to creditors, endorsed the Instagram page XChloesWorld, an unauthorised trader, six months ago. 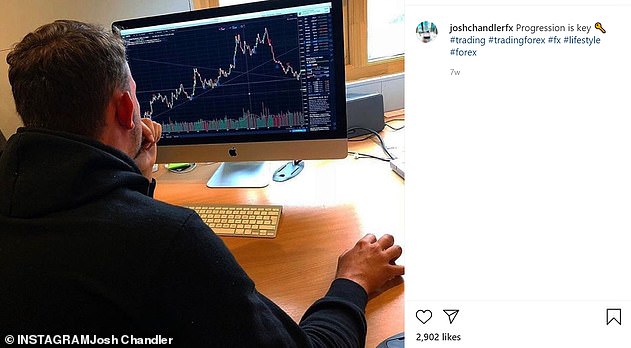 Terrible: The model was paid to advertise the supposed money-making skills of Forex trader ‘Josh Chandler’ to her 2.6million followers (Josh’s one Instagram post is pictured)

Financial authorities were asked to remove the account after backlash online.

The Financial Conduct Authority has made warnings about unauthorised traders on social media sites hiding behind fake profiles.

Katie’s spokeswoman admitted the reality star had benefitted financially from the scheme but did not know it was a con and said she had no idea of any previous warnings from financial authorities.

She said: ‘Katie would never knowingly engage in a social media endorsement if it were questionable. This recent information has left her devastated.’

She added that Katie is also a victim and is not the only celebrity targeted, with Too Hot to Handle star Nicole O’Brien also promoting ‘Josh’s’ scam. 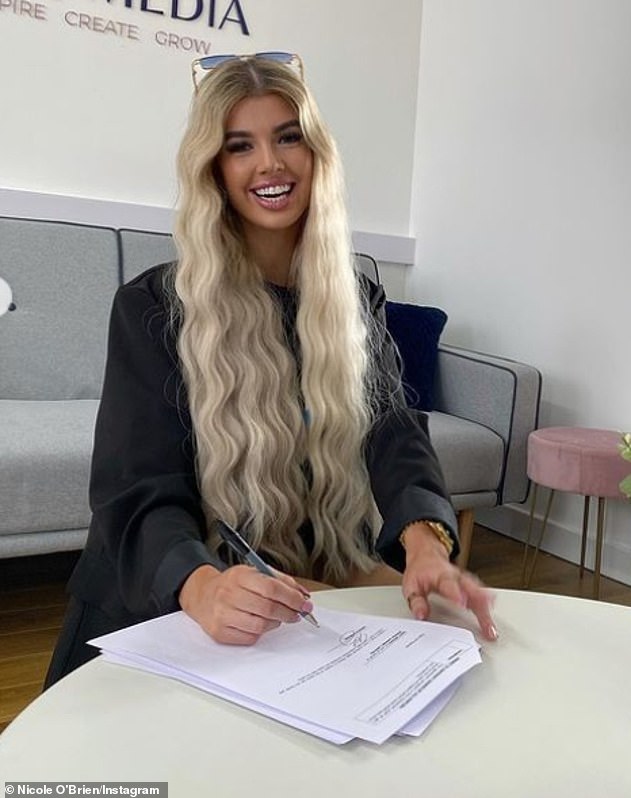 Oops: Katie has not been the only targeted celebrity with Too Hot to Handle star Nicole O’Brien also promoting ‘Josh’s’ scam