There are all sorts of swimmers, and all sorts of reasons for swimming. The author of Madame Bovary, Gustave Flaubert, would swim in the Seine twice a day, relishing what he called ‘a thousand liquid nipples’ travelling all over his body.

At the other end of the scale, the granny of the former topless model Katie Price used to earn her living as a topless mermaid in Brighton, but eventually got the sack for smoking on the job.

The late Charles Sprawson, the author of a beautiful history of swimming, Haunts Of The Black Masseur, saw swimming as ‘a lyrical release from all that is mundane and constricting’.

The greatest swimming writer of them all, Roger Deakin, took it one step further. He saw swimming as a sort of out-of-body experience. ‘When you swim,’ he wrote in his masterpiece, Waterlog, ‘you feel your body for what it mostly is – water – and it begins to move with the water around it. No wonder we feel such sympathy for beached whales; we are beached at birth ourselves. To swim is to experience how it was before you were born. Once in the water, you are immersed in an intensely private world as you were in the womb.’

For Deakin, swimming was like a magic trick, in which the self was made to vanish. ‘Leaving behind the land, you go through the looking-glass surface and enter a new world, in which survival, not ambition or desire, is the dominant aim.’

Michael Phelps. Olympic swimmers are much faster than they were, even a couple of decades ago

I live next to the sea, so can enjoy a quick dip whenever I feel like it. Within seconds of starting to swim, I find my mind released from the pressures of the day, or, in this particular case, the pressure of writing about a slightly irritating history of swimming.

The publisher’s blurb claims that Splash! is ‘as refreshing as jumping into a pool on a hot summer’s day’. This is overdoing it. It is good in parts, but somehow always feels tied to the ground. It never displays the strokes of lyrical beauty, or the sense of weightlessness, achieved by Deakin or Sprawson.

At the end of the book, Howard Means, an American, boasts that he won his first swimming race at the age of five, because he was already able to dive. ‘The summer I was eight, I completed my first nonstop mile, in a little over an hour.’ His book has a competitive air about it: he has a particular interest in record-breakers, and swimming to win.

At high school, he was captain of the swimming team, and captain of his freshman team at the University of Virginia, where he broke every freestyle record for 200 yards and upwards. In his teens, he became a lifeguard at public swimming pools; after college he managed a pool west of Charlottesville, in the foothills of the Blue Ridge Mountains.

Oddly enough, a few years ago, I myself went swimming in a lovely lake situated in a village west of Charlottesville. On a bright, sunny day, I was surprised to find no one else swimming. It was only when I got out that I saw a sign saying ‘NO SWIMMING! BEWARE: SNAPPING TURTLES’. Asking around, I discovered that snapping turtles have been known to bite off a finger, or worse. Perhaps this is why Means is so keen on swimming fast.

He launches his book in a cave in the south-western Egyptian desert, looking at 8,000-year-old drawings that seem to show chubby people swimming merrily along. One of the oddities about the Cave of the Swimmers at Wadi Sura is that it is situated in what is now possibly the driest place in the world.

Some think that the figures are not swimming, but floating on air, either in an altered state of consciousness, or perhaps ascending to an afterlife. But the author is convinced that they are enjoying a swim. ‘Anyone deeply familiar with the doggy paddle knows it when he sees it: the feet, the hands, the position of the head are unmistakable… the swimmers are actually swimming, feet stretched behind them or legs bent at the knee as if getting ready for a new kick, arms reaching out in front.’

He moves swiftly on to the ancient Greeks and Romans, all mustard-keen on swimming: the city of Pompeii had five large public baths. ‘Virtually everyone who could went to one or another of them daily.’ The philosopher Seneca grumbled, as so many have done since, about ‘the enthusiast who plunges into the swimming-tank with unconscionable noise and splashing’.

With the fall of the Roman Empire, swimming went out of fashion in Europe for well over 1,000 years. As Charles Sprawson put it, much more pithily than Means: ‘Almost no one swam in the sea. A few in rivers. If there were exceptions, they tended to be aristocratic.’ The Christian church long associated swimming with sensuality, not unreasonably, and so strongly discouraged any dipping, other than for the dunking of witches.

Before swimming pools were introduced in 1908, Olympic swimmers were dropped from a boat into the sea: first to reach shore won.

As a subject, swimming has been too seldom chronicled to make anything other than a very patchy history book. This means that the author has to make great leaps in time between one example and the next. When writing about historical events, he also feels obliged to adopt a relentlessly jocular tone, as if figures from the past are inherently comical, and in sore need of an update. Of Lord Byron’s famous swim across the Hellespont, he writes: ‘George Gordon, Lord Byron, would have loved “selfies” – that’s a given – and probably Twitter too.’

He wastes rather too many pages – 50 or so – on the history of swimwear. He seems to favour skinny-dipping, blaming all attempts at covering up on the unnecessary prudishness of the times. ‘The prudes, the censors, the guardians of public morality were everywhere to be found in and around American swimming venues,’ he harumphs. On the other hand, he doesn’t seem to realise that those of us who swim in the wild are always grateful for a little protection from jellyfish – or from snapping turtles, for that matter.

Nevertheless, he comes up with some good stuff in other areas. I particularly liked this 1784 life-saving tip from Benjamin Franklin for those whose ships have just gone down: ‘A man who can swim, may be aided in a long traverse by his handkerchief formed into a kite, by two cross sticks extending to the four corners; which being raised in the air, when the wind is fair and fresh, will tow him along while lying on his back.’ He is good, too, on the strange way in which swimming has progressed over the past 150 years. When Captain Webb managed to swim his way across the English Channel in 1875, the Mayor of Dover confidently declared that ‘in the future history of the world, I don’t believe that any such feat will be performed by anyone else’. Well, it took a full 36 years, and 80 failed attempts, before the next person managed, but since then, 1,800 swimmers have made the trip, so that it’s beginning to seem less like an achievement, and more like the cheapskate’s way of getting to France.

Olympic swimmers are much faster than they were, even a couple of decades ago. Means puts it down to a combination of more water-dynamic swimsuits and goggles, more vigorous shaving of body hair, pools subjected to wave-mechanics analysis and crafted for speed, and the advent of dieticians. 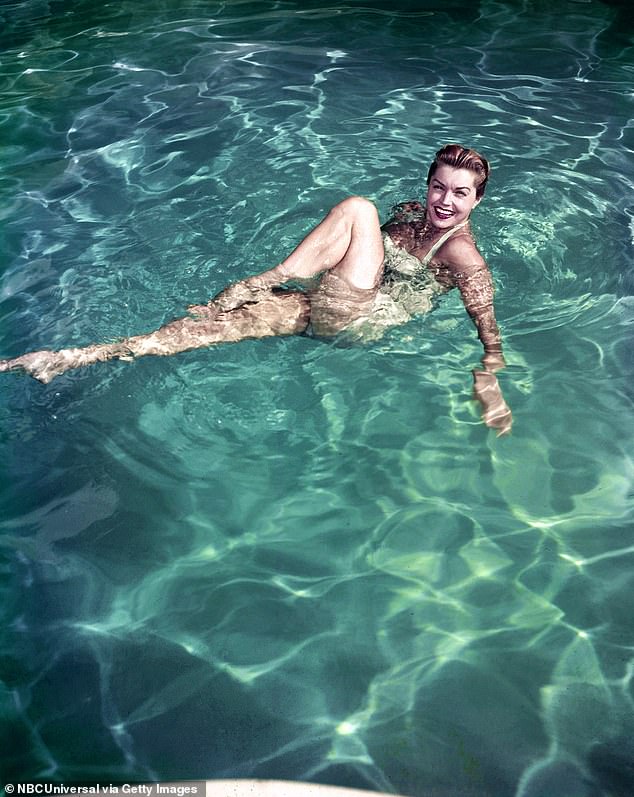 Swimmer/actress Esther Williams. Means wastes rather too many pages – 50 or so – on the history of swimwear

And some swimmers are born with bodies freakishly well adapted to the demands of water: the ‘Baltimore Bullet’ Michael Phelps, the most decorated Olympian of all time, is 6ft 4in tall, has a wingspan of 6ft 7in, an elongated upper torso, feet that are size 14, and outsized hands that might equip him to become a clown, or a traffic controller, if ever he grows tired of the day job.