Katie Taylor insisted she will step into the ring confident of coming out victorious in her undisputed clash with Amanda Serrano at Madison Square Garden on Saturday.

The rivals tipped the scales on Friday with the Irish fighter coming in the heavier of the two at 136.6lbs to her challenger’s 133.6lbs in front of the New York crowd.

The undefeated Taylor (20-0) is set to defend her WBA, WBC, IBF and WBO lightweight titles against the seven-weight world champion.

The two faced off in front of an electric crowd with a smiling Taylor delaying stepping away for a second as he remained focused on Serrano.

‘And they say women can’t sell, are they out of their mind? You have two of the best pound-for-pound going at it, I can feel the love and support,’ said Serrano on stage.

The duo had been set to meet in the ring two years ago only for their proposed bout to be cancelled due to the Covid-19 pandemic. 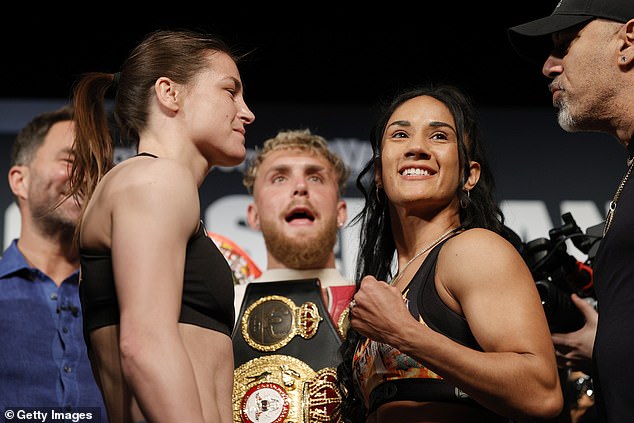 Taylor claimed she was confident of winning the clash as she revealed the best part was inspiring young girls.

‘I don’t train to lose any fights, I train to win, it’s the same for me Saturday,’ Taylor said via Sky Sports. ‘I’m stepping in there confident I’ll be coming out victorious.

‘Stylistically I think it’s going to be a very exciting fight. I think the winner is going to have to show a lot of heart, a lot of grit, a lot of skill.’