She was a fan of Disney-themed costumes when hosting American Idol.

Katy Perry tried out something a bit different when she put on a bunny suit ahead of American Idol’s Easter Sunday episode.

The 35-year-old singer–songwriter covered up her growing baby bump in the cute suit as she announced a Facebook Live chat with her fans just before the show started.

In the spirit: Katy Perry, 35, dressed up as the Easter bunny on Sunday ahead of a pre-taped American Idol episode

Katy appeared to be posed in her front entranceway, based on the hat racks hanging by her rounded wooden doorway.

She beamed and seemed to have on minimal makeup while wearing the zip-up suit, which had a white body with a pink pink belly and a hood with long ears over her head.

‘Somebunny  is going to be live on FACEBOOK with you right before Idol starts tonight at 7:45p ET to have a little Q&A about any of your #AmericanIdol questions,’ she wrote. 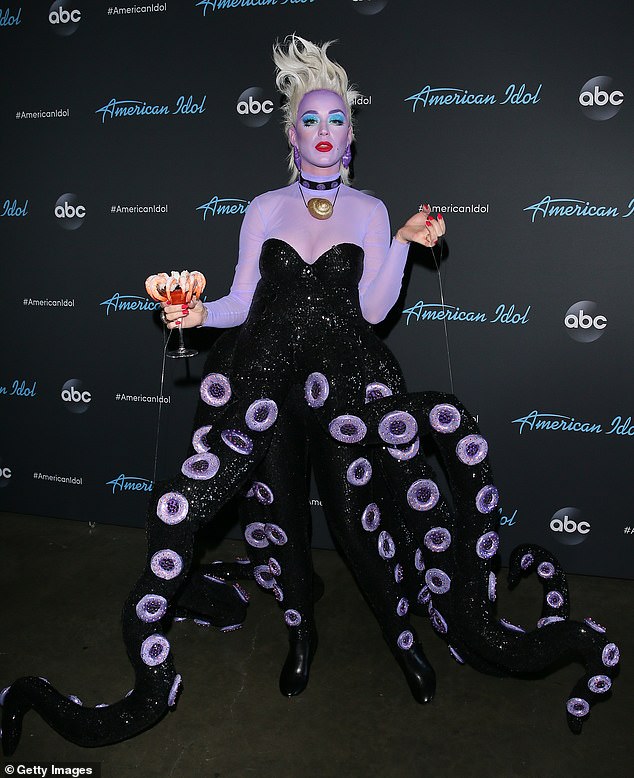 Disney girl: Katie’s used to wearing costumes when she performs, and she’s also made a habit of dressing up as Disney characters for the show’s Disney episodes; pictured in 2018 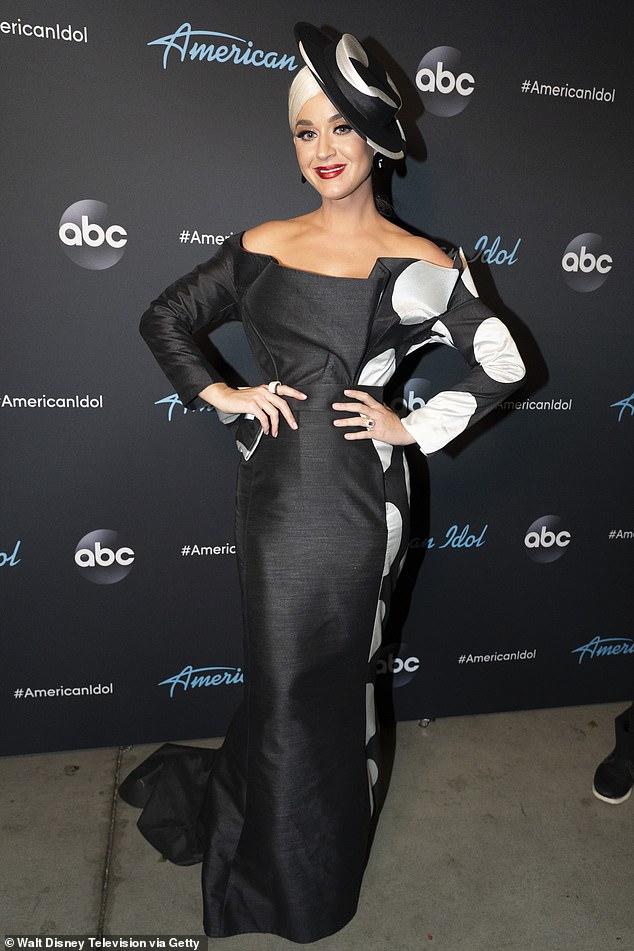 Having a blast: She was Ursula from The Little Mermaid in 2018 and Cruella de Vil from 101 Dalmatians last year; pictured in May

Katy’s used to striking costumes when performing, but she also likes to change up her look when she’s on American Idol, especially on the show’s Disney nights.

In 2018, she dressed up as Ursula from The Little Mermaid by painting herself purple and wearing a black sequined suit covered in tentacles.

She tried out a more minimalist look last year as Cruella de Vil from 101 Dalmatians, with a black dress featuring large white spots on one side and a spotted Cordovan hat. 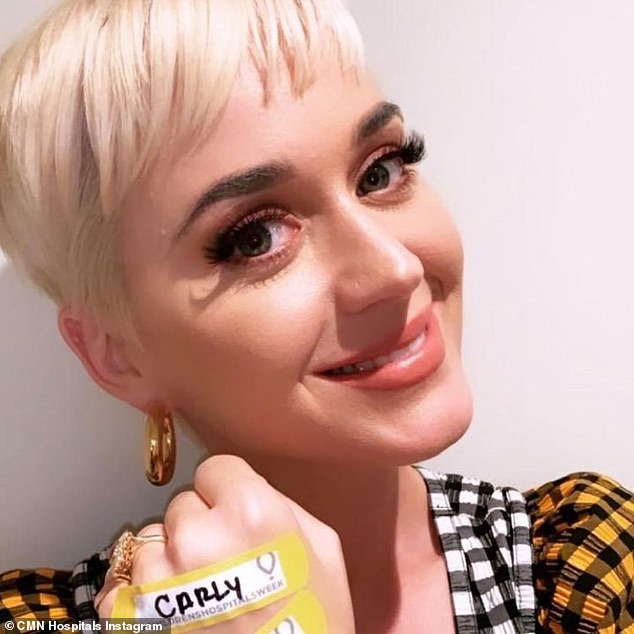 Connecting: Katie planned to get on Facebook Live to chat with her fans 15 minutes before the show started 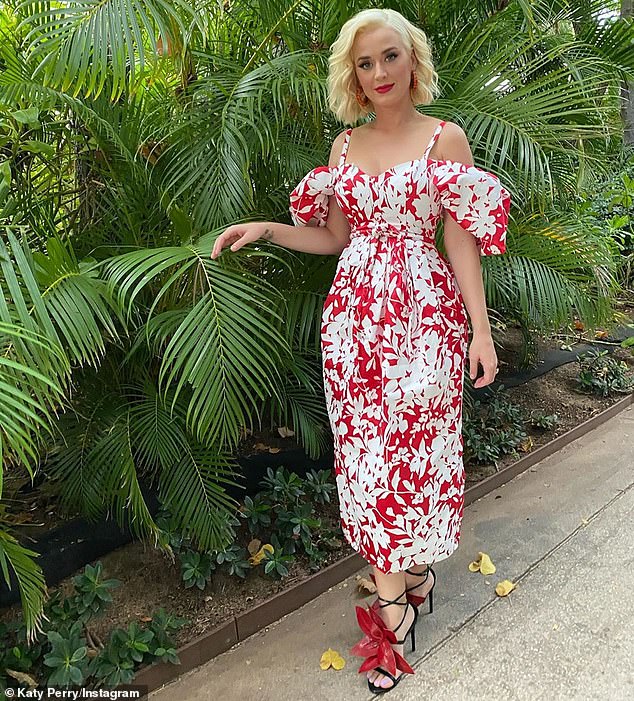 Tropical time: Recent episodes were filmed in January and February in Hawaii. Katie posted a throwback photo late last month from her time in paradise

Though Katie has been quarantining at home amid the coronavirus pandemic with her fiancé Orlando Bloom, 43, she was still determined to be millions of fans a taste of live entertainment.

American Idol sent its contestants and staff home amid shelter-in-place orders, but the series had enough pre-taped episodes banked to continue airing them April 19.

Rather than broadcasting two episodes per week, Idol has only been on Sunday to make the episodes last longer.

Recent episodes were filmed during a tropical vacation to Hawaii in January and February, but they’re now just seeing the light of day.

Katy posted a throwback photo late last month of herself in a vibrant red and white floral pattern dress as she wandered through the island state. 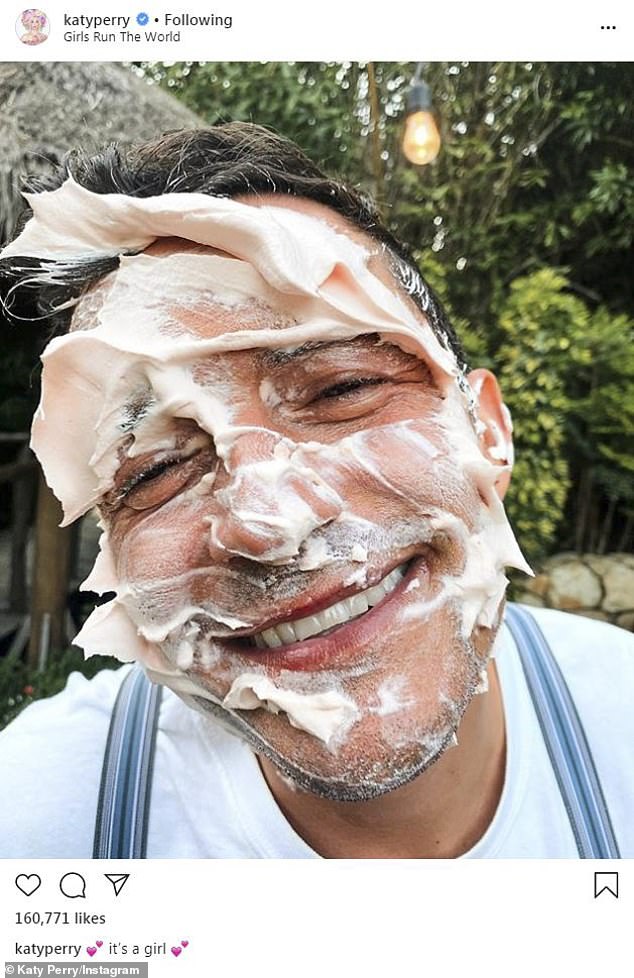 It’s a girl! Katy revealed earlier this month that she’s having a girl with her fiancé Orlando Bloom after posting a photo of his face smeared with pink frosting 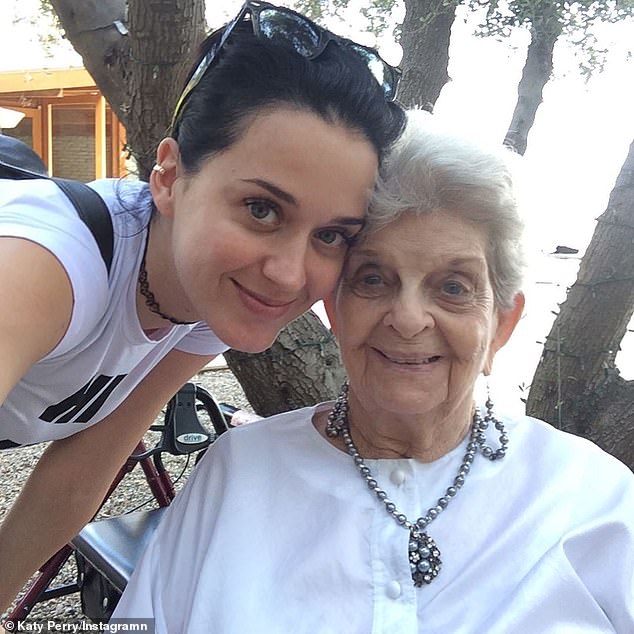 Something in mind: Source say she wants to give the child one of her grandmother Ann Pearl Hudson’s names, though it could be any of the three

She revealed the couple were expecting a baby girl earlier this month when she posted a photo of Orlando from the sex reveal with his face slathered in pink frosting.

This week, it was reported that the Teenage Dream singer is planning to name her daughter after her grandmother Ann Pearl Hudson, who died March 9, though she’s open to using any of those names.

‘It was Katy’s grandmother that made Katy the woman and the fighter that she is today,’ a source told Rob Shuter.

‘Katy believes that it is no coincidence that as her granny’s soul leaves the earth, another soul arrives,’ they continued.