On their website, Keith Hudson Ministries, they say they’re a ‘dynamic couple who’ve been ministering together for 40 years’ and ‘always had a strong prophetic ministry’, with Mary hosting ‘Prophetic Nights’, where she speaks in tongues and claims to heal members of the audience.

Recently they’ve been asking on their various social media platforms for ‘your donations [which] provides resources for women in shelters living in California & Hawaii.’

The link to donate automatically goes to the ‘Becoming a Partner’ page, where all donations fund their religious globetrotting, which they’ve called ‘The Urgency Tour’.

Katy Perry’s evangelical preacher parents, Keith and Mary Hudson, are selling $20 face masks and bracelets to fund their lifestyle preaching around the word 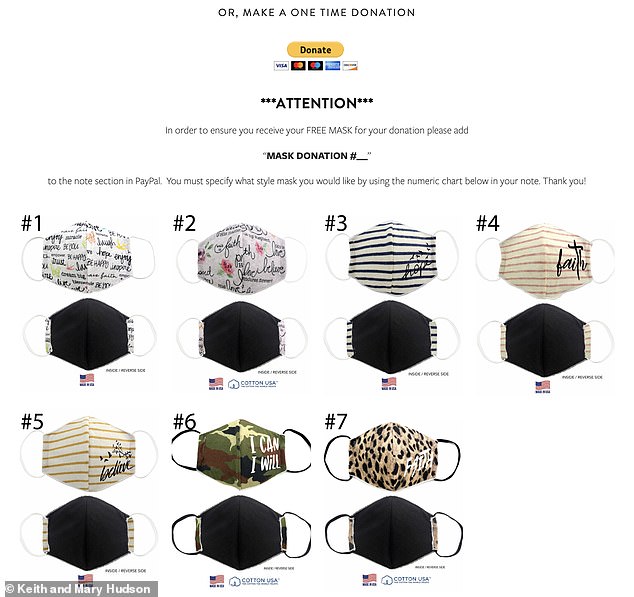 The $20 face masks come with different designs and messages that say  ‘I Can, I Will, ‘Faith’ and ‘Believe’ 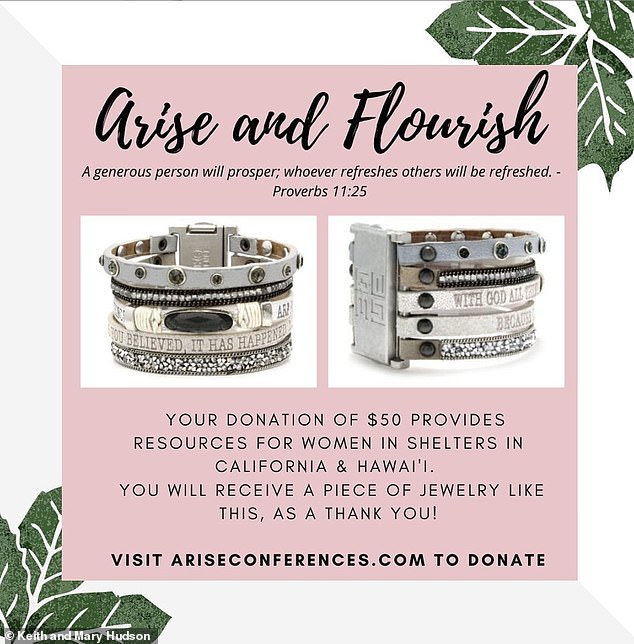 In the past they have asked for donations to provide resources for women living in shelters in California and Hawaii. They’re currently selling these bracelets with inspirational messages 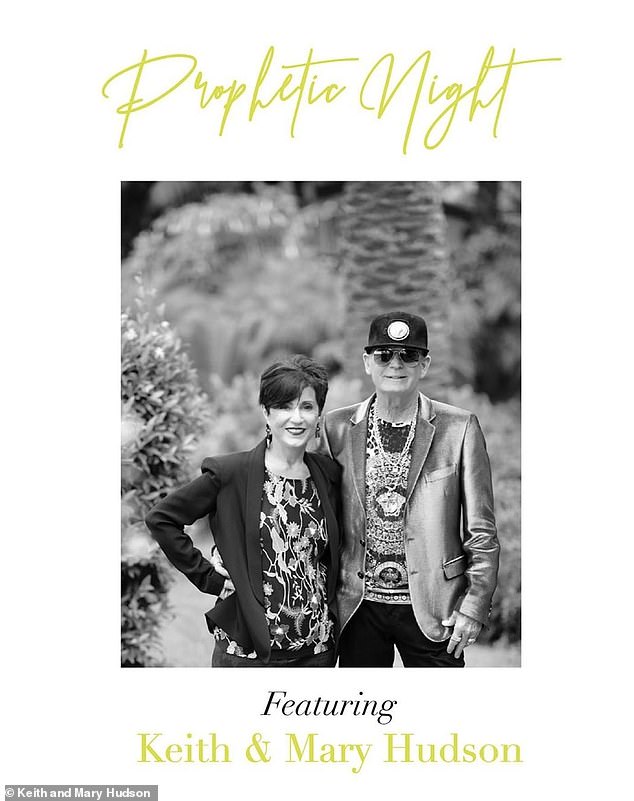 On their website, Keith Hudson Ministries, they say they’re a ‘dynamic couple who’ve been ministering together for 40 years’

It states: ‘God has given us a voice… a voice that reaches out to women in domestic violence shelters and encourages them to overcome, a voice for teenagers to rise up and help change their generation for Christ. When you partner with us, your voice joins with ours to increase the impact we can have on this generation.

‘God has called us to reach out to the world and we’ve called this outreach ‘The Urgency Tour.’ We believe that the time is now for us to do whatever we can do to reach this generation with the simple gospel. 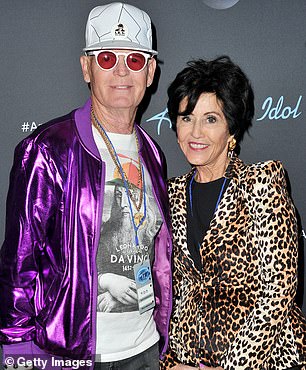 ‘Your convenient, auto-debit gift of any amount is appreciated and establishes your commitment with this ministry as a friend and regular supporter. Giving is an expression of love and commitment to advance the work of the Kingdom of God. Know that your monthly donations help us to continue and expand our reach and help proclaim the Gospel worldwide.’

The couple are also asking for $50 donations and, in return, you’ll receive a fabric and metal bracelet with the words ‘Because you believed, it has happened’.

On Twitter and Instagram, they’ve posted photos with the caption: ‘Make a difference today in a Diamond Girls life’.

When making a donation, it goes to the same ‘Becoming a Partner’ page.

Mary also hosts Arise Conferences all over the globe, usually in exotic and luxurious surroundings.

The Arise Conferences website states: ‘The Lord gave her a word in 2006 that He would use her to raise up bold, trailblazing women who outside think the box. Over thirty Arise conferences have empowered women in such diverse locations as Hawaii, Malaysia, France, Belgium, Panama, Switzerland and the USA.

‘Women from domestic violence shelters and drug rehabilitation homes are invited to attend and be transformed from victims to victors. Prophetic words are downloaded to Mary as she ministers throughout the congregation. Her ministry of encouragement has brought many out of darkness into His marvelous light.’ 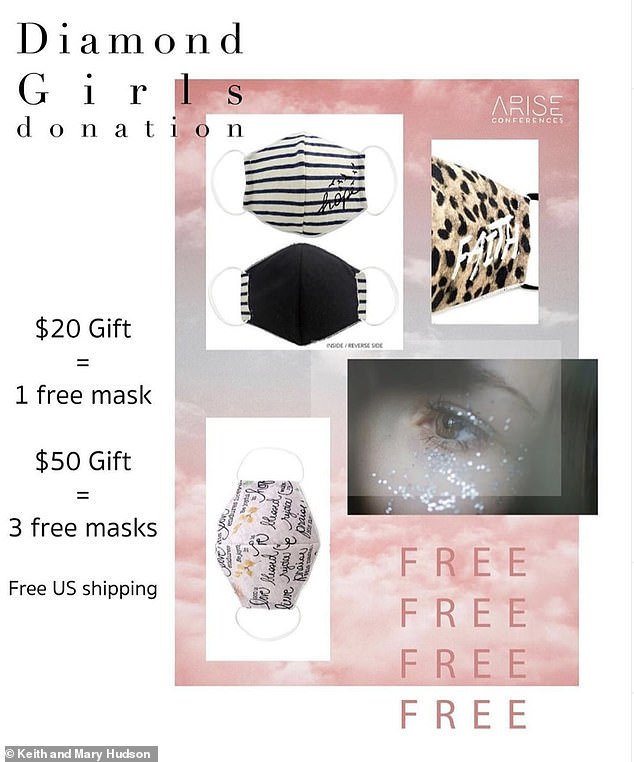 The couple are also asking for $50 donations and, in return, you’ll receive a fabric and metal bracelet with the words ‘Because you believed, it has happened’ 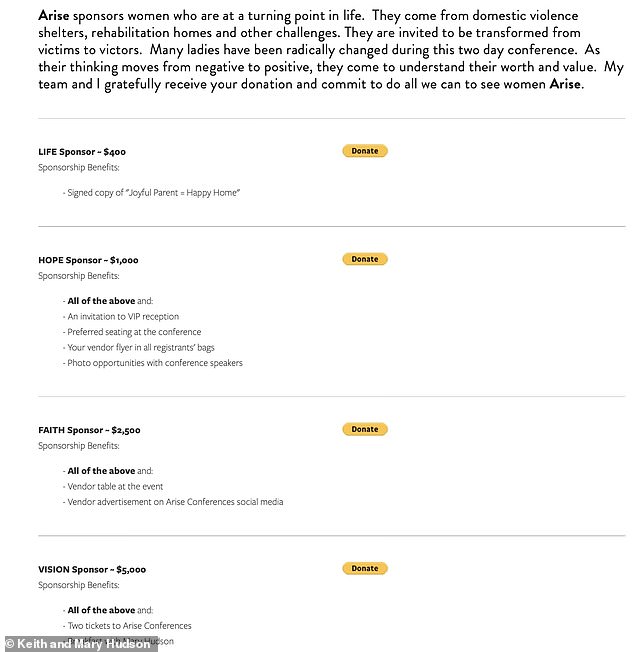 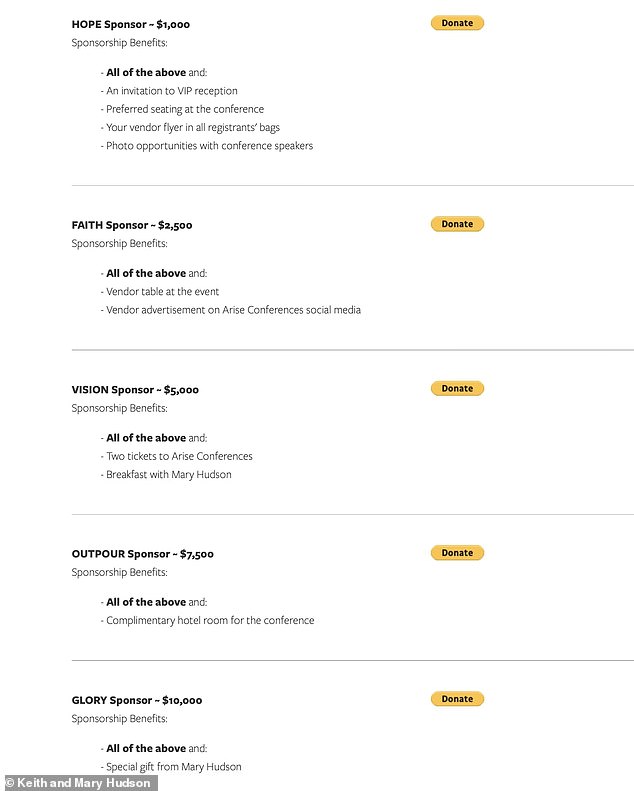 On Keith and Mary’s website there are numerous options to donate and become a sponsor, starting from $400 to $10,000

The next women’s conference is in September in Hawaii at Kaua’i Marriott Resort, a four-star hotel on the beach, where rooms cost $309 per night plus taxes, on top of the $65 to attend the event.

The following month, there’s a three-day event at Wailea Beach Resort, Hawaii, another Marriott where the most basic room costs at least $650-a-night for that time of year, plus $85 entry fee for the event.

In the blurb on the Arise Conference site, it quotes the bible that to ‘Believe his prophets and you will prosper… Join us and help encourage 40 ladies from local shelters be transformed by the word of God!’

There’s also an ‘Arise Kona’ in Hawaii planned for May next year at Waikoloa Beach Marriott Resort and Spa and ‘Arise Santa Barbara’ the following month.

Any of these events can be sponsored, although it’s unclear from the Arise Conferences website where the money goes. 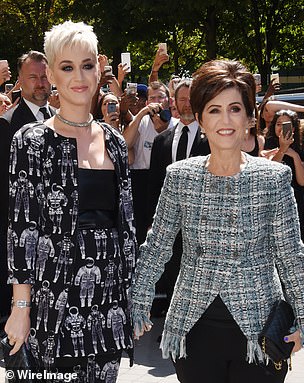 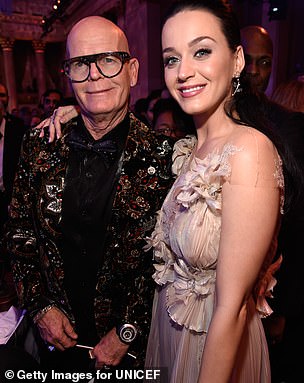 Katy’s parents are due to become grandparents soon as their pop star daughter is expecting her first child, a baby girl, with actor Orlando Bloom

For $1000, as a ‘HOPE Sponsor’, you’ll receive an invitation to the VIP reception, preferred seating and photo opps with the guest speakers.

It goes all the way upto $5,000 for a ‘VISION Sponsor’ – two free Arise Conferences tickets and ‘breakfast with Mary Hudson’.

The top one is ‘GLORY Sponsor’ – for $10,000 you’ll receive the VIP trimmings of the cheaper sponsor packages plus a ‘special gift from Mary Hudson’.

Keith and Mary Hudson travel the globe preaching at evangelical churches after giving up their own in Santa Barbara in the eighties.

The couple believe that the Holy Spirit is within them and they believe in ‘the word of wisdom, the word of knowledge, faith, gifts of healing, working miracles, prophecy, discerning of spirits, and various kinds of tongues.’