The high-profile airing of sexual assault allegations against Supreme Court nominee Brett Kavanaugh has led victims around the country to flood support center lines with calls, come forward with reports of rapes and publicly share long-held stories of their own experiences of being attacked.

For many who had stifled painful memories for years, hearing Christine Blasey Ford share her accusation against Kavanaugh reopened old wounds. For others dealing with a recent experience of assault, it has spurred them to report the crimes or seek counseling or other help.

‘Having this in the news all the time has flipped their lives upside down,’ said Kristen Houlton Shaw, executive director of the Sexual Violence Center in Minnesota, where the number of first-time callers has increased in the past week. ‘So many different things can trigger people, and this time it’s the news.’ 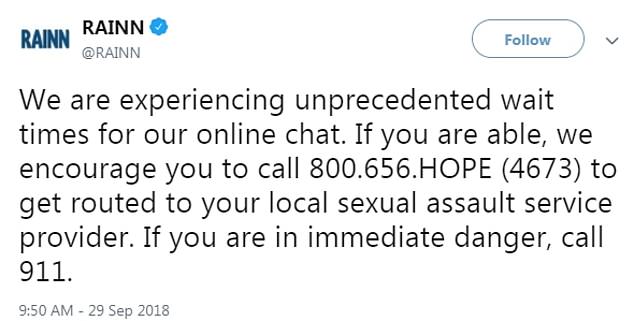 The day after Ford’s testimony, RAINN, the US’ largest anti-sexual violence organization tweeted about a huge surge in calls to their hotline and delays with their online chat function

Kavanaugh has denied any wrongdoing and gave an impassioned defense of himself at a Senate hearing on Thursday. It was Ford’s words, though, that resonated with many who survived an assault and were stirred by testimony recounting terror they understood lasts a lifetime.

‘It’s a real mixed bag and a real mix of emotions about both the power of this moment and the pain,’ said Jess Davidson, who leads the advocacy group End Rape on Campus and said she has heard from many survivors of sexual assault in recent days who are sharing their stories for the first time. ‘I don’t think there’s any way we walk away from the conversation that our country is having this week without seeing a shift.’

At the Our Voice rape crisis center in Asheville, North Carolina, executive director Angelica Wind estimated a 15 percent increase in calls from both survivors who were triggered by Ford’s testimony and loved ones seeking advice on how to best support victims they know. 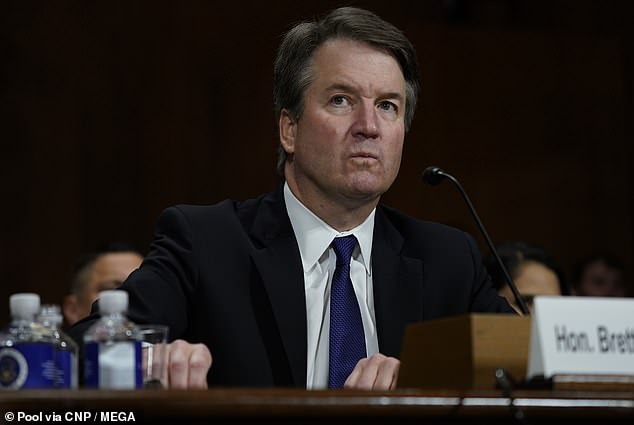 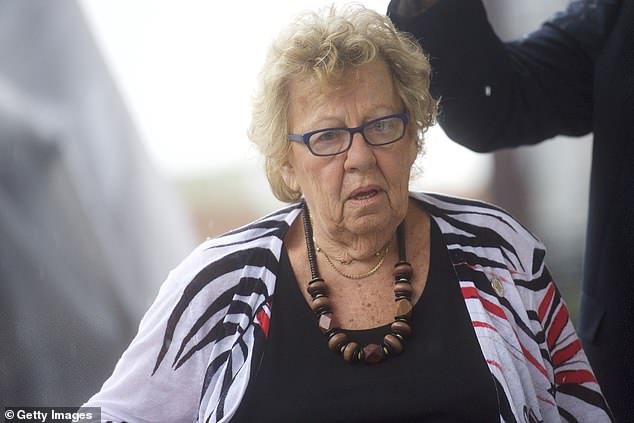 Wind said if the national conversation in coming weeks is supportive of Ford, more people might come forward, encouraged by a case in which an accuser is believed. But if not, many won’t see the point in airing their stories.

‘We’re at a crossroads. We can either move forward and do a cultural change where we send a message to survivors that we are here for you. We believe you. It wasn’t your fault and there are resources you can access,’ she said. ‘Or we can move back to dismantle all the progress we have done.’

At TurnAround, which supports sexual assault victims in and around Baltimore, CEO Rosalyn Branson said a help line that typically gets two or three calls overnight got 11 on Thursday, specifically citing the Kavanaugh case. Some were people who had never told anyone of their assaults before.

‘They felt the need to talk to someone about what they’d been through in a way they hadn’t before,’ Branson said. ‘I can’t imagine that there’s any place that it’s not happening. We’re all experiencing this together and there are many, many people, more than anyone knows, who have been through it.’

Across the U.S., advocates already seeing a growth in demand as the #MeToo movement has sent out ripples, saw an even greater spike with Kavanaugh.

In California, YWCA crisis intervention manager Alexandra Richardson said centers in San Jose and Sunnyvale experienced a surge in calls to 24-hour support lines, some from people talking for the first time about sexual assaults from as many as two decades ago. 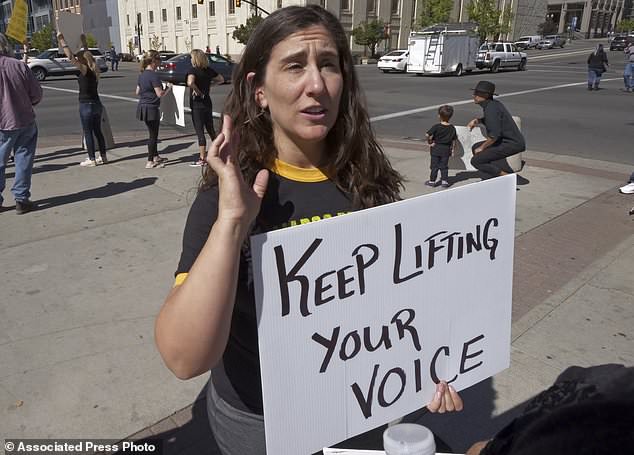 Democratic candidate for U.S. House in Utah, Shireen Ghorbani (in September), is among the many public figures who have gone public with their personal claims of sexual assault 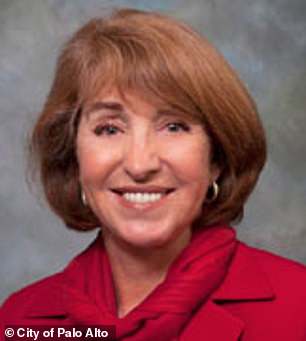 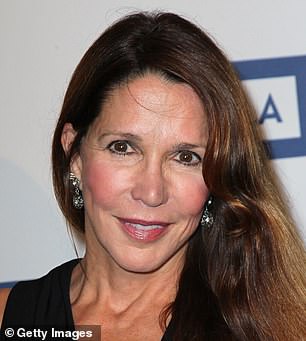 California’s Palo Alto Mayor Liz Kniss said Ford inspired her to speak publicly about the two times she was sexually assaulted, while Ronald Reagan’s daughter, Patti Davis (right), revealed her own rape by a music executive

At Safe Horizon in New York, call volume to its rape and sexual assault hotline was up 150 percent Thursday over the same day last year. On Friday, calls were up a staggering 500 percent. Kia Myrie-Edwards, the director of the hotline, said many of the callers were women over 60 who said watching the Kavanaugh hearing made them recall things that happened to them years ago that they may not have thought of as sexual assault at the time.

Sharon Daugherty, the sexual assault outreach coordinator at Palm Beach County Victim Services in Florida, said 17 women had come in to undergo examinations for attacks in the past 10 days, far more than usual. She believes victims are being encouraged by the national debate.

‘We’re not going to change the whole world in one setting, but the level of conversation has been risen,’ Daugherty said.

The National Sexual Assault Hotline reported a 201 percent increase in calls Thursday over its average level. RAINN, the organization that runs the hotline, warned on Twitter that ‘hearing about sexual violence in the media can be very difficult for survivors.’

The Kavanaugh coverage has prompted some victims to talk about their own stories of abuse for the first time, sometimes in hushed conversations with a friend, others in a Facebook post. For some public figures, it was done in very high-profile ways.

The majority leader of the New Jersey Assembly, 83-year-old Loretta Weinberg, revealed she was groped and forcibly kissed by a man when she was just 13. Shireen Ghorbani, a candidate for a U.S. House seat in Utah, went public with her sexual assault as an 8-year-old. And in Palo Alto, where Ford lives, Mayor Liz Kniss said she was inspired by her constituent to publicly speak about the two times she was sexually assaulted and narrowly escaped rape.

Patti Davis, the daughter of the late President Ronald Reagan, came to Ford’s defense last week by revealing her own rape by a music executive. Like Ford, she said, she couldn’t remember what month the attack took place, what her assailant might have said to her, or if his assistant was still in the office.

‘Your memory snaps photos of the details that will haunt you forever, that will change your life and live under your skin,’ she wrote in The Washington Post, defending Ford’s inability to remember some details of her alleged attack. ‘It blacks out other parts of that story that really don’t matter much.’