A kayaker attempting to circumnavigate New Zealand has forced a dramatic rescue off a remote beach in complete darkness.

Paul Gaastra, 58, was suffering from severe hypothermia and clinging to life when he was rescued from his home-made kayak off the coast of Northland, New Zealand on Wednesday, Stuff reported.

He was caught out after capsizing in rapidly rising waters, and was languishing for three hours before he was found by a rescue helicopter.

Paul Gaastra, 58, was severely hypothermic and clinging to survival when he was rescued from his home-made kayak off the coast of Northland, New Zealand on Wednesday

A New Zealand army aircraft landing at a nearby airbase picked up his personal locator beacon alert and raised the alarm in what was described as a ‘fluke’ discovery.

It’s not the first time Mr Gaastra has needed rescuing from his pedal-powered kayak.

In August, police rescued him after he went overboard at Opotiki beach on New Zealand’s North Island.

He said he gave up a horticulture career in order to chase his dream of kayaking the entire coast of New Zealand.

But unimpressed locals have slammed him for trying to fulfill his dream, accusing him of wasting police resources.

‘I guess he isn’t experienced enough to gauge his ability to the conditions and not think of the safety and cost of his rescuers,’ one man wrote online.

‘Hope search and rescue sends him a bill.’

‘Think it’s time he gave it up… free rescues?’ added another. 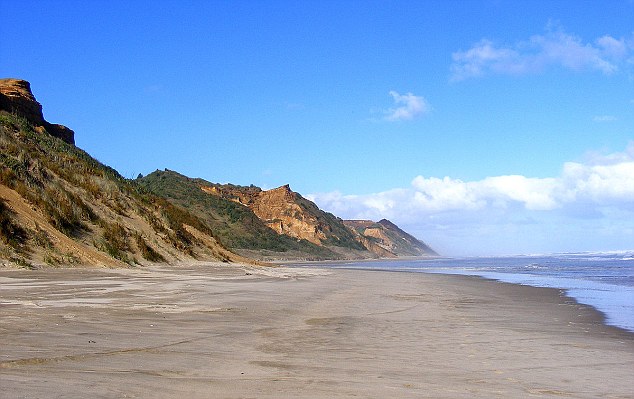 Northland Rescue Helicopter chief pilot Pete Turnbull said Gaastra was ‘not in a good state’ when he was saved (Pictured: Northland coast)

Northland Rescue Helicopter chief pilot Pete Turnbull said Gaastra was ‘not in a good state’ when he was saved.

‘It wasn’t a powerful signal, we didn’t pick it up until were two miles away,’ Mr Turnbull said.

‘It was a fluke an aircraft landing at Whenuapai picked it up and alerted the Rescue Coordination Centre and notified Coastguard.’

Andrew Ferguson, an advanced paramedic and rescue swimmer, was lowered down to rescue Gaastra from the sea.

‘This canoeist was found just in time. The helicopter rescue crew believed he had been in the water for two hours and had a very close call,’ Mr Ferguson said.

Mr Gaastra was flown to Whangarei Hospital in a serious condition, but was discharged on Thursday.