The heartbroken father of a five-year-old boy who died after falling into a fast-flowing river kissed his son’s coffin today as hundreds of mourners lined the streets for the boy’s funeral.

Kayden Fleck was swept away more than four miles down the Braid River in Ballymena, Co Antrim.

Despite frantic attempts to save him, he died on Friday after being airlifted to hospital in Belfast.

Heartbreaking: Darrel Fleck, the father of tragic five-year-old Kayden, kissed his son’s coffin today as hundreds of mourners turned out for the boy’s funeral 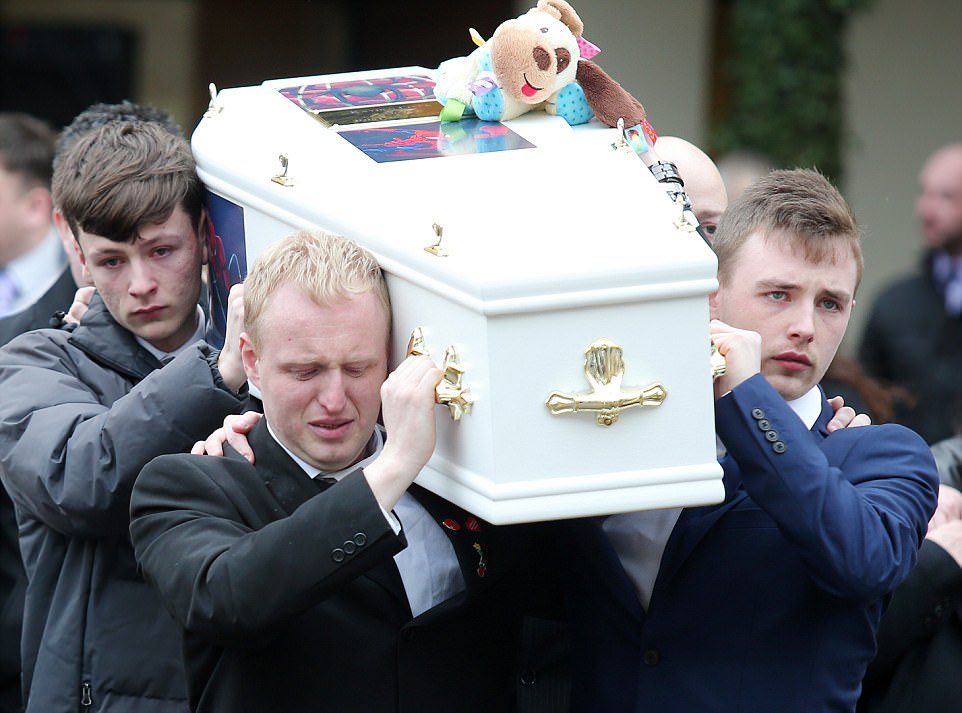 Kayden died after falling into a fast-flowing river. Despite frantic attempts to save him, he died in hospital on Saturday. He was laid to rest in Ballymena today 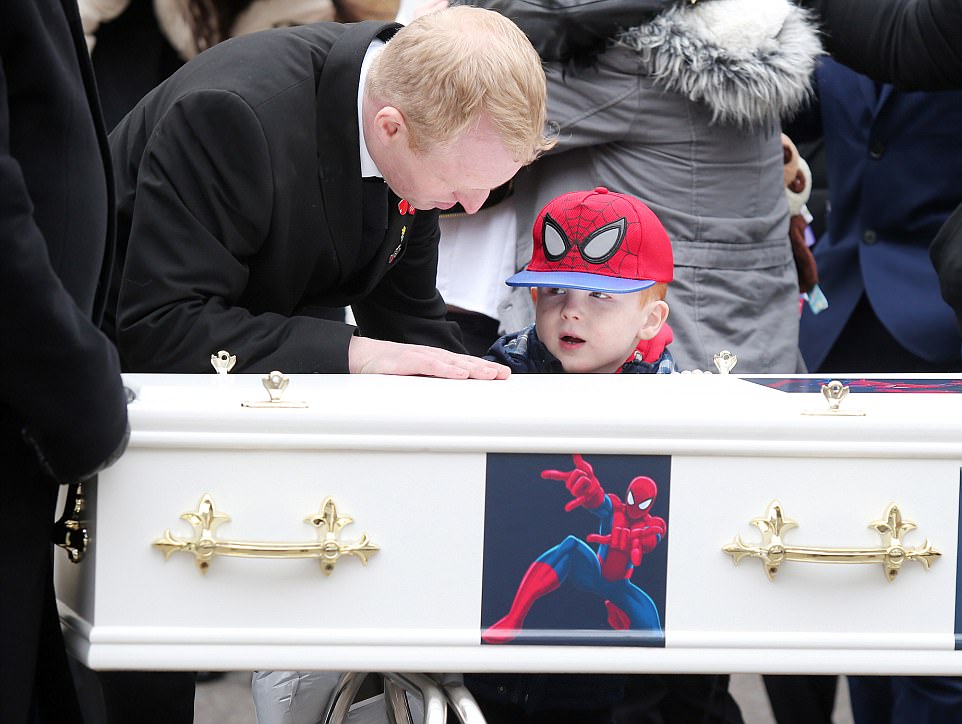 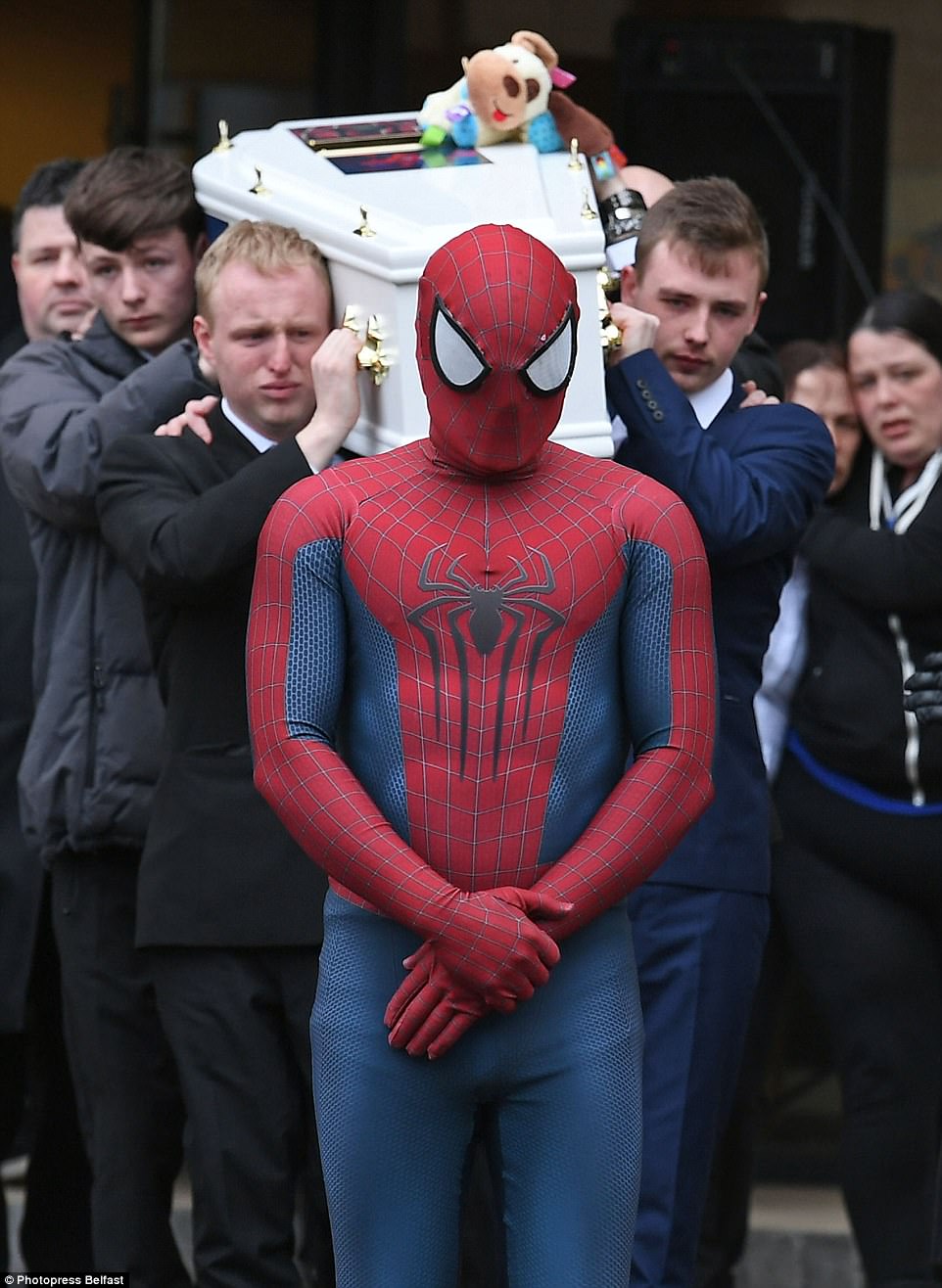 A mourner dressed as Spider-Man walked ahead of Kayden’s coffin today. Kayden’s devastated father Darrel was among those carrying the casket 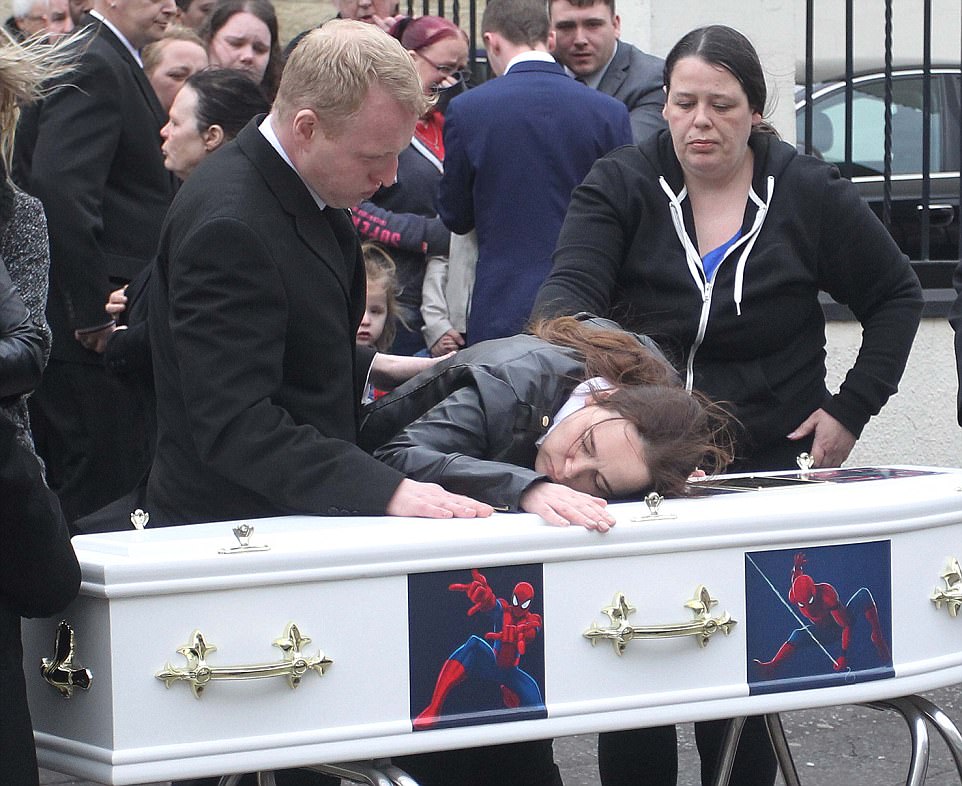 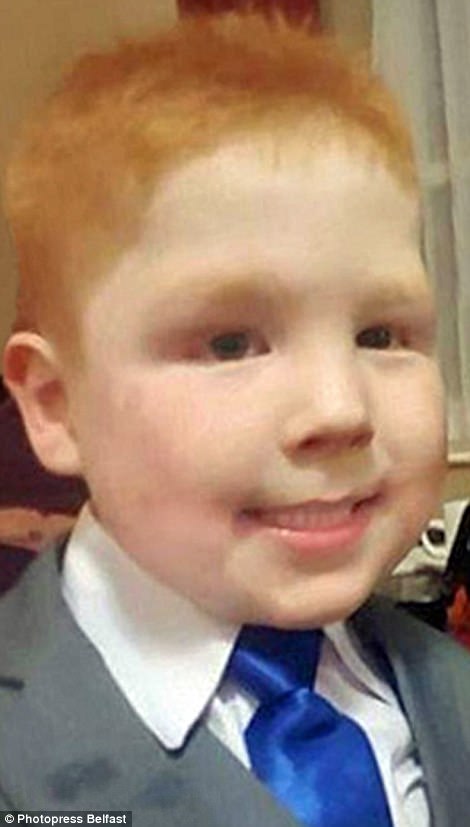 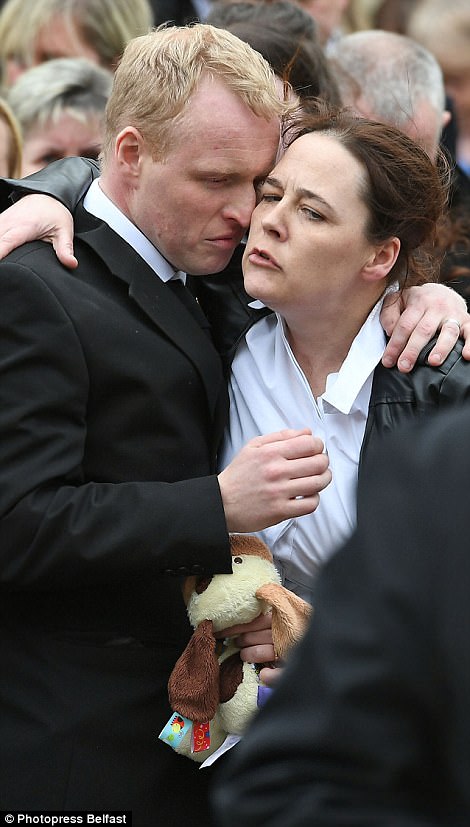 Jayden’s body was recovered and he was flown to hospital where he died. Today, his parents Darrel and Leanne, comforted each other as they said their final goodbyes. Mrs Fleck clutched a child’s toy as she fought back tears

Today, distraught loved ones turned out to say their final goodbyes at a service at Elim Pentecostal Church in Ballymena, where Kayden went to Sunday school.

A mourner dressed as the iconic comic book character was also at the funeral.

Mr Fleck and his wife, Leanne, were pictured kissing the coffin while Kayden’s twin brother, Jayden, was seen placing a hand on the casket.

In emotional scenes, Kayden’s aunt, Samantha, wept as she paid tribute to the boy.

She said: ‘Before you go, we give you this, half of our hearts, and one last kiss. We’ll miss you dearly, that we know. But off to heaven, now you must go.’ 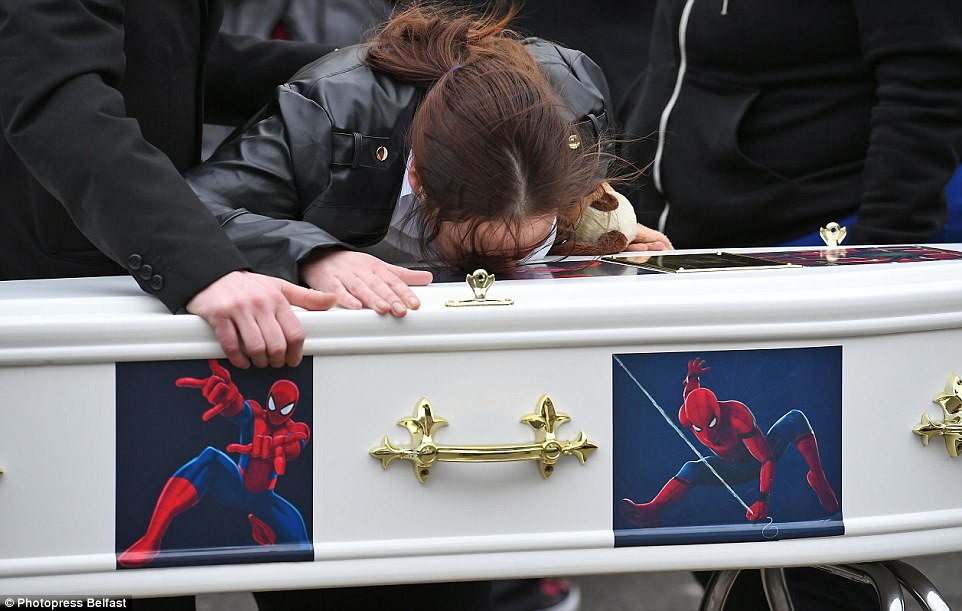 Kayden’s mother, Leanne, kissed his coffin as hundreds of mourners turned out to say goodbye to the tragic five-year-old 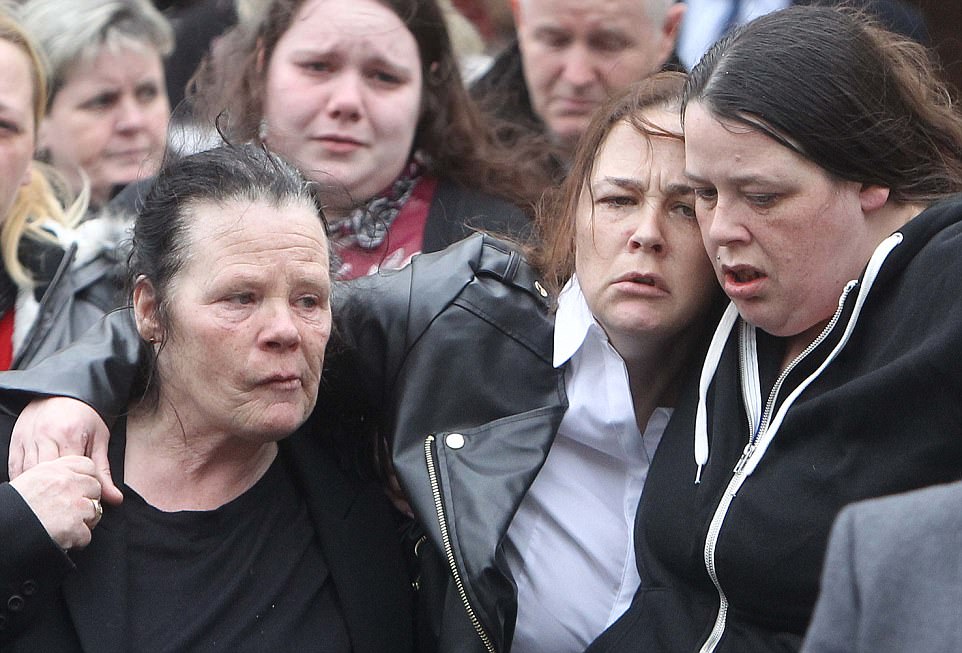 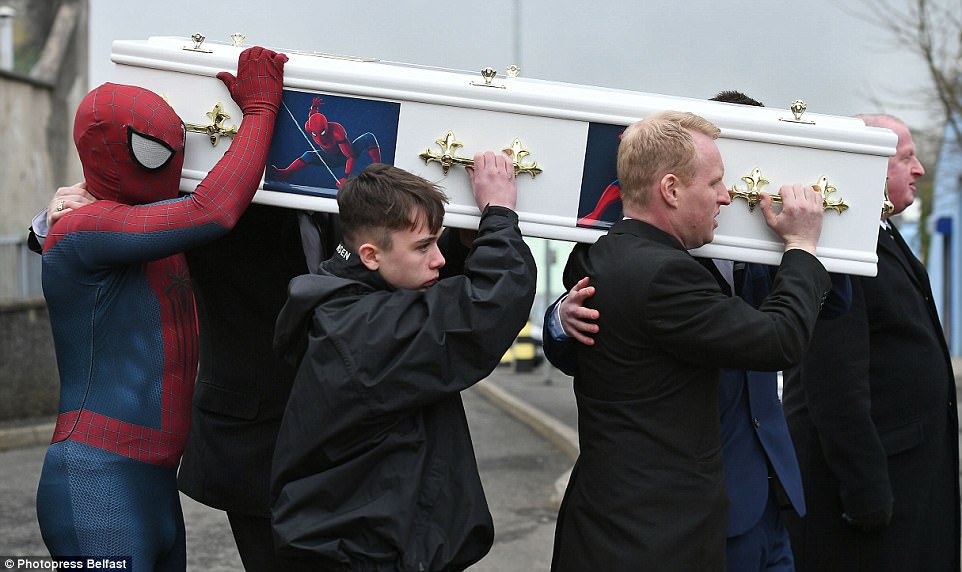 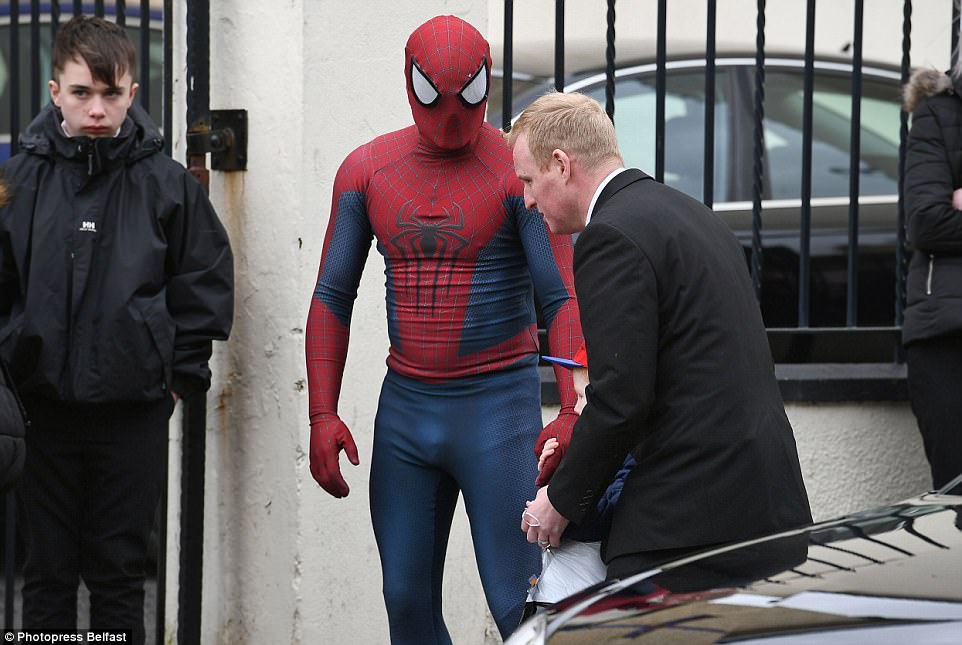 Kayden’s father, Darrel, held his other son, Jayden, as the family said goodbye to the five-year-old who died after being swept away by fast-flowing waters 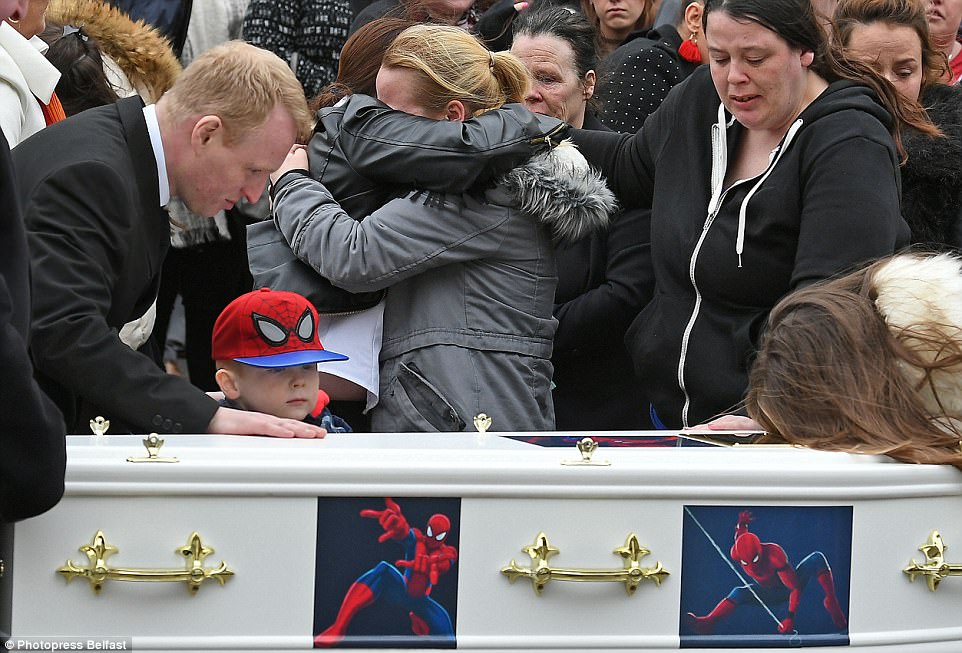 Mourners comforted each other at the funeral of five-year-old Kayden Fleck today. Kayden’s twin brother, Jayden, wore a Spider-Man cap 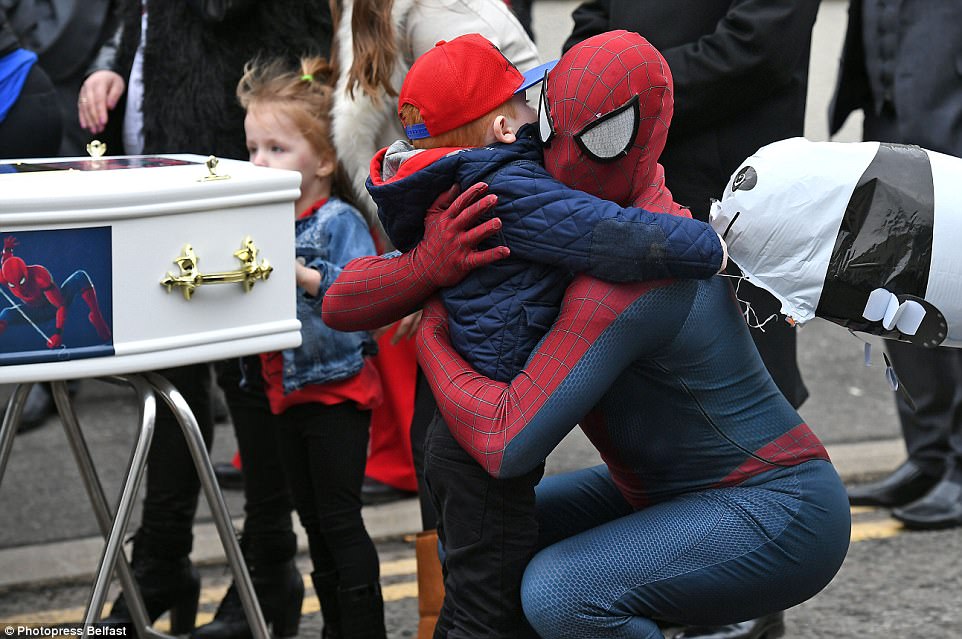 Jayden hugged a mourner dressed as Spider-Man. The family described the twin brothers as ‘the two musketeers’

Kayden’s parents, Darrel and Leanne, fought back tears and Mrs Flek told their son he was their ‘everlasting angel’.

She added: ‘In our dreams we hold you tight’.

Following their son’s death, Kayden’s devastated parents Darrel and Leanne paid an emotional tribute, saying the child ‘just melted your heart’ and describing him as ‘happy-go-lucky’ and ‘your average wee boy’.

They said Kayden and his twin brother, Jayden, were ‘the two musketeers’.

A statement released by the Police Service of Northern Ireland on behalf of Mr and Mrs Fleck added: ‘The family want to thank each of the agencies who were involved in the search and rescue operation yesterday, and say they are grateful for the community support they have received since.’

Kayden was swept away more than four miles down the Braid River in Ballymena, Co Antrim, on Saturday, February 10.

A major search and rescue operation was launched and the boy was recovered from the river and airlifted to the hospital, but he was declared dead shortly afterwards.

The boy’s school, Harryville Primary, has asked for everyone to remember Kayden’s family in their prayers.

In a statement on Facebook, the school said it was ‘a very sad time’. 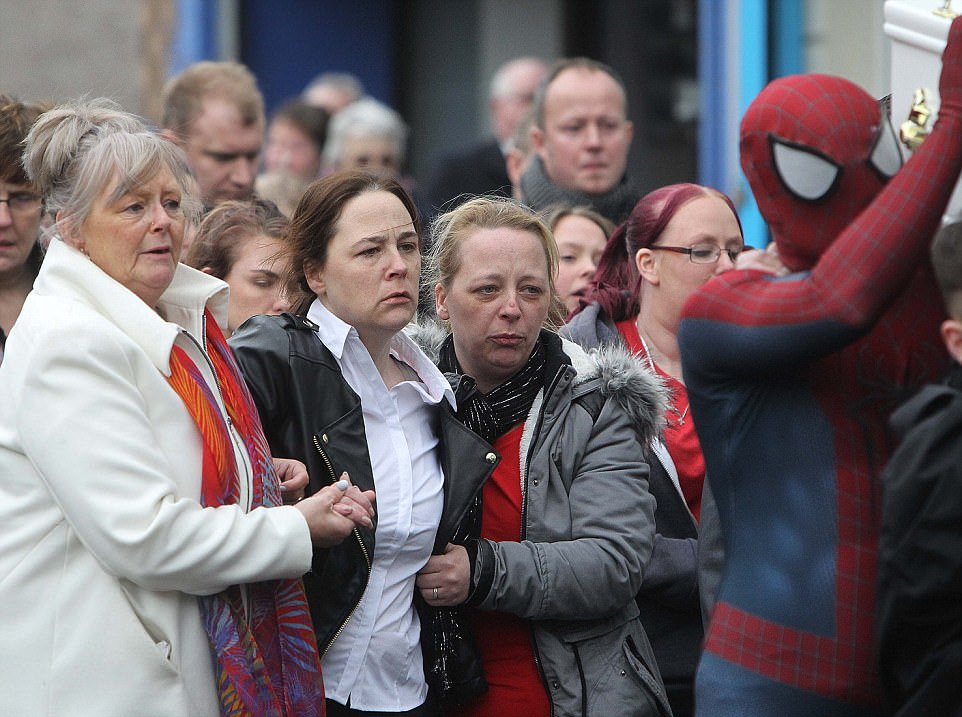 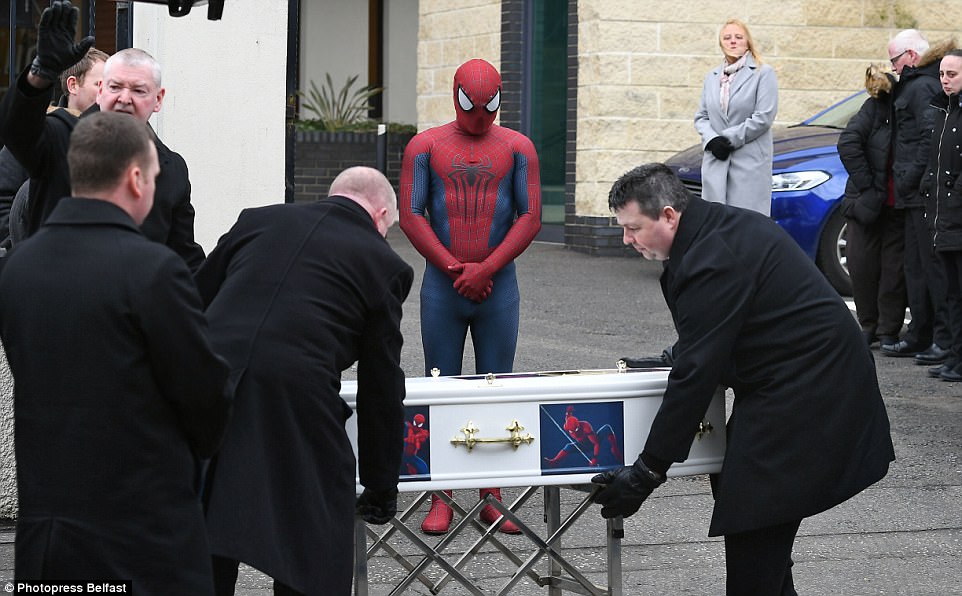 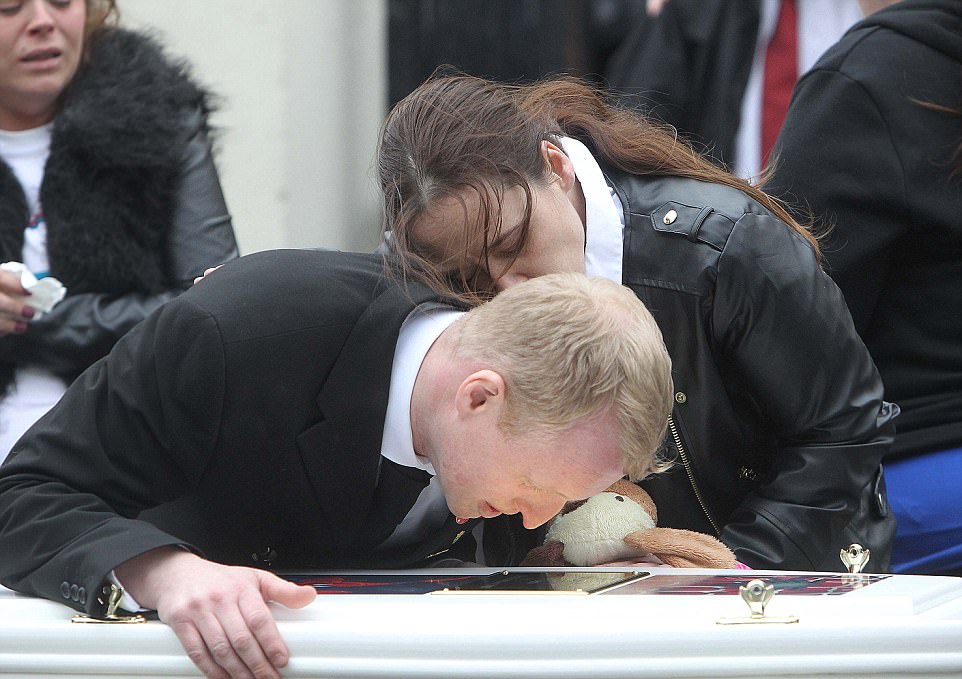 Kayden’s coffin was decorated with Spider-Man pictures. His father was pictured saying an emotional final goodbye 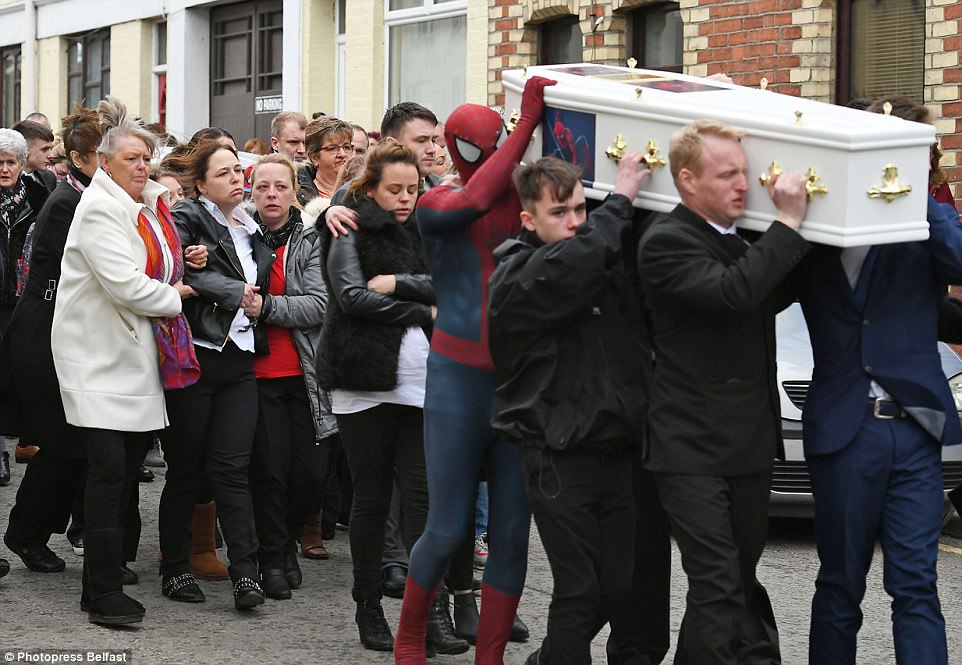