A students’ union pays for £12-per-hour ‘safe space marshals’ to police external speakers to make sure they do not voice views that are offensive to the audience.

King’s College Students’ Union requires marshals to attend events with a phone in hand so they can take ‘immediate action’ if anyone expresses opinions thought to discriminate against ethnic or sexual minorities.

They monitor any speaker thought likely to perpetrate a ‘safe space breach’, which included Tory MP Jacob Rees-Mogg – who was watched by a total of five marshals at a talk last Wednesday.

The officials are also required to put up posters saying, ‘This is a Safe Space’ and record any instances of offensive behaviour reported to them by members of the audience.

The students’ union is required to provide marshals for events where speakers are judged to have a ‘medium or high’ risk of breaking its safe space policies under central university rules.

University staff reserve the right to cancel a speaker if the society does not allow one to attend.

Mr Rees-Mogg spoke at King’s College Conservative Association, where audience members mocked the marshals by holding up safe space posters before the talk.

The marshals are told to look out for discrimination based on ‘any distinction’, including ‘age, race and gender identity’. 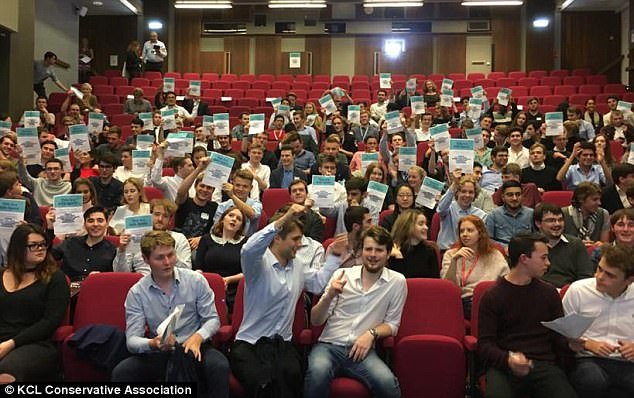 The presence of safe space marshals at Mr Rees-Mogg’s speech was mocked by members of the audience, who held up safe space posters before the start of the event on Wednesday

Mr Rees-Mogg, who was not initially aware of the marshals’ presence, told MailOnline: ‘When I arrived I was told that there was a safe space policy.

‘The point of university is to have vigorous debate and the safe spaces approach is the antithesis of what university should be about.

‘If people don’t like what is being said they can go to other meetings.’

The marshals are recruited and funded by the KCL students’ union. An online advert for the post offers free weekly yoga and spin classes as part of the contract.

Potential applicants are expected to have a ‘good level of education’ and knowledge of its safe space policy.

Mr Rees-Mogg described the idea of safe spaces as antagonistic to free speech, saying universities were ‘very weak’ on the issue. 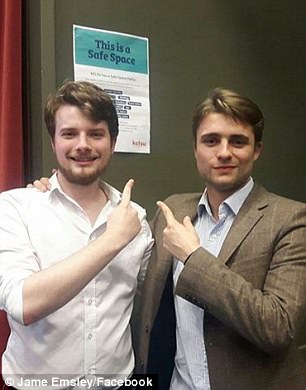 Jack Emsley posed with his friend Harry Mayo next to a safe space poster after Wednesday’s talk. He mockingly thanked the students’ union for providing a ‘fantastic safe space’

‘That would be a much better approach than imposing additional bureaucracy on the heads of student societies.’

The students’ union also provides safe space marshals with a pension contribution of up to 6%, monthly healthy lunches, birthday treats and unlimited cups of tea and coffee.

Successful applicants are also allowed 30 days off a year, or can boost their salaries to £13.32 an hour from the usual £11.89 by accepting holiday pay.

Frank Furedi, emeritus professor of sociology at the University of Kent, said: ‘You could not make this up.

‘The logic of employing someone to patrol the campus for safe space violations is to turn KCL into a mini, soft police state.

‘Next they’ll be employing monitors to listen in to lectures. It pays better than a bar-job so they are unlikely to have a shortage of applicants.’ 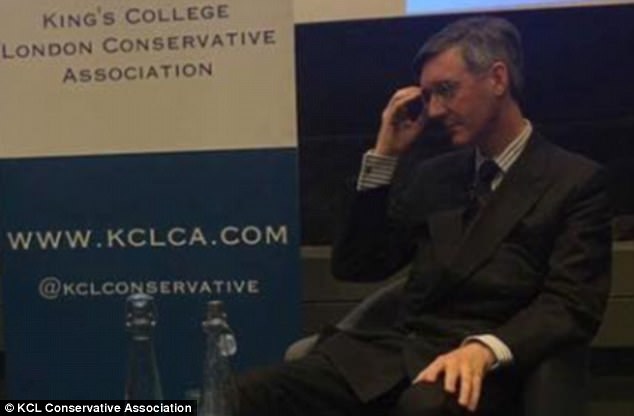 Mr Rees-Mogg called the idea of safe spaces an attack on free speech, saying universities were ‘very weak’ on the issue

The group, which claims to command ‘substantial support’ from the student body, describes the marshals as a ‘drain on resources’ and a threat to free speech.

It adds in a Facebook post: ‘It creates an environment in which students are treated as if they need chaperones and supervisors to hold their events.

‘That is deeply patronising and takes away student autonomy over their societies.’

The safe space marshals programme dates back to 2015, although James Findon, a member of the Conservative Society, said it was ‘still news’ to many students.

Jack Emsley, editor of The 1828, the Conservative Association Journal said: ‘The students’ union is intolerant of opposing ideas and uses Safe Space as an effective smoke screen.

‘It’s telling that a MP needed five safe space marshals to watch over him but that the same procedure failed to prevent anti-Israeli activists from calling for violence against Jewish Israeli students last year.’

These are screenshots of the job description for safe space marshal’s, taken from a document on the King’s College London Students’ Union website 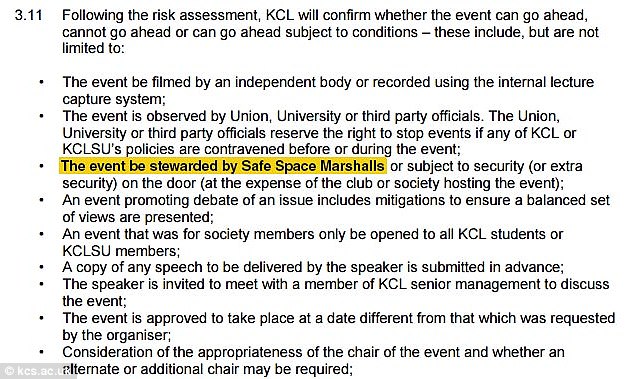 This is an extract from King’s College London’s ‘External Speakers Policy’, with the line referring to safe space marshals highlighted in yellow

A King’s College London spokesman told MailOnline: ‘Universities have a unique challenge to create environments in which open and uncensored debate from all sides on issues of political, scientific, moral, ethical and religious significance can take place without fear of intimidation and within the framework of the law.

‘We are proud of our diverse community and are absolutely committed to academic freedom and free, peaceful and respectful dialogue where people have conflicting views.’

London’s most PC university? How King’s has regularly caved in to the snowflakes

This is just the latest of a series of decisions by King’s College London that have been criticised as examples of excessive political correctness.

In July, one of its faculties announced it would swap portraits of some of its founding fathers for a ‘wall of diversity’ including more BME scholars.

The world famous institute of Psychiatry, Psychology and Neuroscience said the move would make the site less ‘intimidating’ for ethnic minorities. 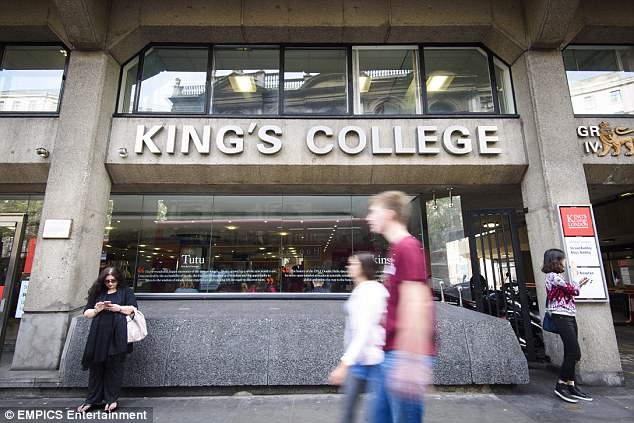 Last year, one of the faculties at KCL announced it would swap portraits of some of its founding fathers for a ‘wall of diversity’ including more BME scholars

Last year, King’s was forced to deny it planned to abolish the national anthem from graduation ceremonies after a student complained it was ‘outdated’.

The student officer claimed God Save The Queen was ‘linked to increasing far-right nationalism’, sparking an angry response from fellow students.

At first, King’s told MailOnline it was ‘in discussion’ about the use of the song, before later issuing a statement saying it had ‘no plans’ to abolish the song.

And in 2015, King’s sparked controversy for removing a photograph of former Archbishop of Canterbury Lord Carey over his opposition to gay marriage.