A drunk kebab shop customer was caught on camera attacking stunned takeaway staff after his food took too long to arrive, it has been claimed.

The man is filmed shouting and swearing at workers behind the counter of Flames and Fries in Chalfont St Peter in Buckinghamshire before he starts throwing punches.

The video, filmed by a bystander, shows him raising his fists at a member of staff before launching into the assault.

He attempts to punch one member of staff, as another worker shouts at him to ‘get out.’ 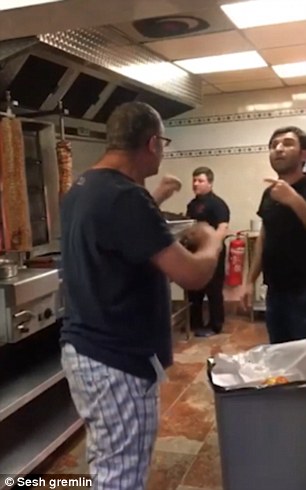 But the man ignores their pleas and throws himself at the two men, lashing out at their face and body, but missing his intended target.

Plastic takeaway boxes are thrown in the air as the attacker continues his assault, before the brawl disappears from shot.

It spills into a back room, and pans can be heard clattering to the floor in the background.

As the two minute video comes to an end, the man filming the attack says ‘come on, you have made your point.’ 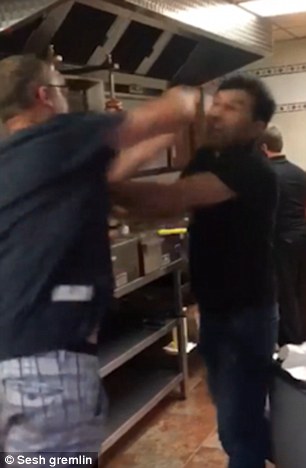 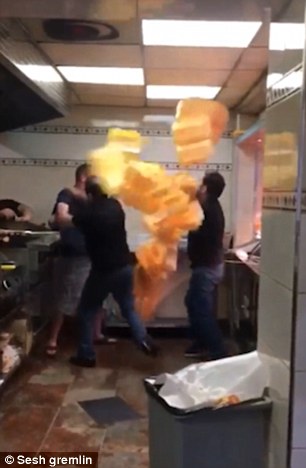 He throws his arms at one of the men, and another staff member becomes involved as plastic takeaway boxes are thrown in the air

Witnesses said the fight escalated because his food had taken ‘too long to come’ and he went to the shop to confront them.

After it was posted on Facebook the video has been notched up nearly two million views.

It has attracted up to 6,000 comments, branding the man involved a ‘disgrace’ – and also hitting out at the person filming the fight because he doesn’t step in to help.

One local resident wrote:  ‘The guys in that shop are really kind, and always, always polite.

‘This is behaviour to be rejected and to be ashamed of. 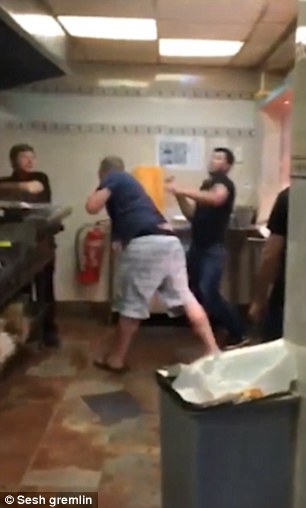 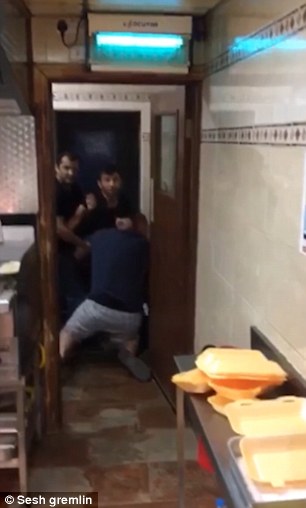 The man, who is clearly drunk, starts lashing out at the two men, but misses his intended target (left). It then spills into a back room as pans can be heard clattering to the floor

‘In the seven years that I lived in this village I used this shop often and the guys in the shop were FANTASTIC every time.

‘This man’s behaviour is NOT funny, and is NOT a reflection of the high regard for the people who run the shop that so many people have.’

Another said: ‘Does anyone know this Pathetic drunk scumbag? WHAT AN EMBARRASSMENT!’

The person who filmed the video said he had seen the man in the area before, but could not identify him.

One of the staff members suffered a black eye in the attack.