Keep summer alive with these short-haul deals – and they’re all less than £1,000

Today may feel like a Mediterranean summer’s day, but soon it will be turning chilly all over the UK.

Don’t pack away your swimwear just yet, though, because you don’t have to go far for reliable sunshine, and a holiday in October means fewer tourists, warmer seas — and cheaper prices. Sometimes we forget that southern Spain — a two-hour flight from the UK — is just a short hop from North Africa, so temperatures are often in the high 20s right up until November.

So why not treat yourself to a late blast of summer to set yourself up for the winter ahead? From Marbella and Morocco to Turkey and the Canary Islands, we’ve scoured what’s on offer to find the best trips for catching some rays — all within easy reach of the UK . . .

The tiny, road-free island of La Graciosa in the Canary Islands. It can be reached only via the 30-minute ferry from Orzola, Lanzarote

Channel your inner Robinson Crusoe on La Graciosa, the lesser-known Canary Island. The tiny, road-free island can be reached only via the 30-minute ferry from Orzola, Lanzarote.

From the main village, explore in a Jeep taxi or hire a bike for an adventure on two wheels. Along with hiking trails and virtually no people (population: 700) are some of the best beaches in Europe. Try Playa de la Cocina for aquamarine waters and a vast stretch of sand, or Playa del Salado, which has a free campsite. Several self-catering apartments also dot the island.

Book it: You can hire or buy camping equipment on Lanzarote and pay for set-up on La Graciosa in advance. Ryanair offers return flights from £151 (ryanair.com).

Relax in the Costa del Sol 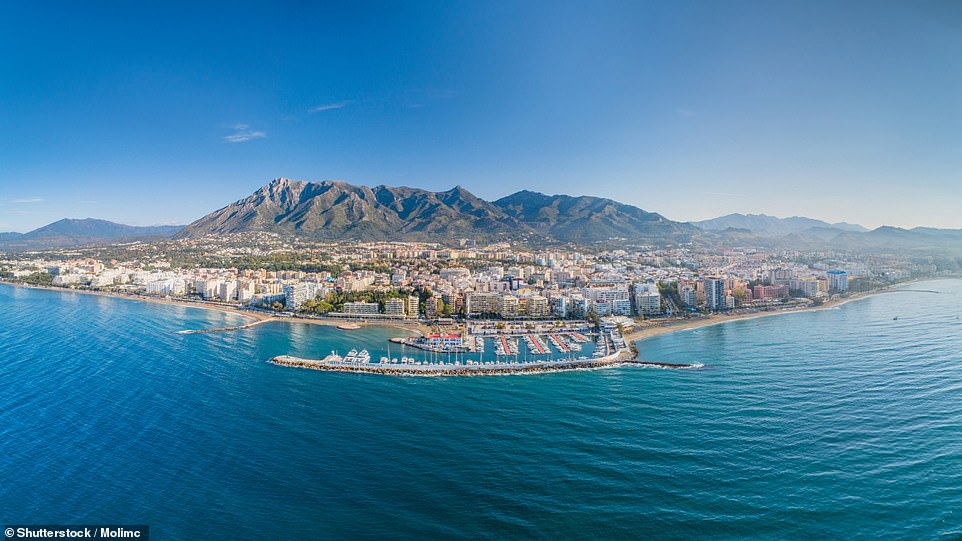 In Marbella, pictured, the average high in October is 22c, dropping to as low as 12c at night. Expect 11 hours of daylight each day, with the sun going down at 8pm

If non-stop sunbathing isn’t your idea of a holiday, try Amare, located on a buzzing stretch of sand a minute’s stroll from Marbella’s old town. The adult-only hotel is one of the hippest hangouts in the Costa del Sol.

Chill on your lounger to a soundtrack of DJs and live saxophonists, sip sundowners at the rooftop bar and catch up on sleep in your dazzling white room.

When you’ve had your fix of relaxation, you’re on the doorstep of the city’s best bars, restaurants and boutiques — there’s even a personal shopping service to help you find bargains from local designers.

October weather report: The average high in October is 22c, dropping to as low as 12c at night. Expect 11 hours of daylight each day, with the sun going down at 8pm at the beginning of October. 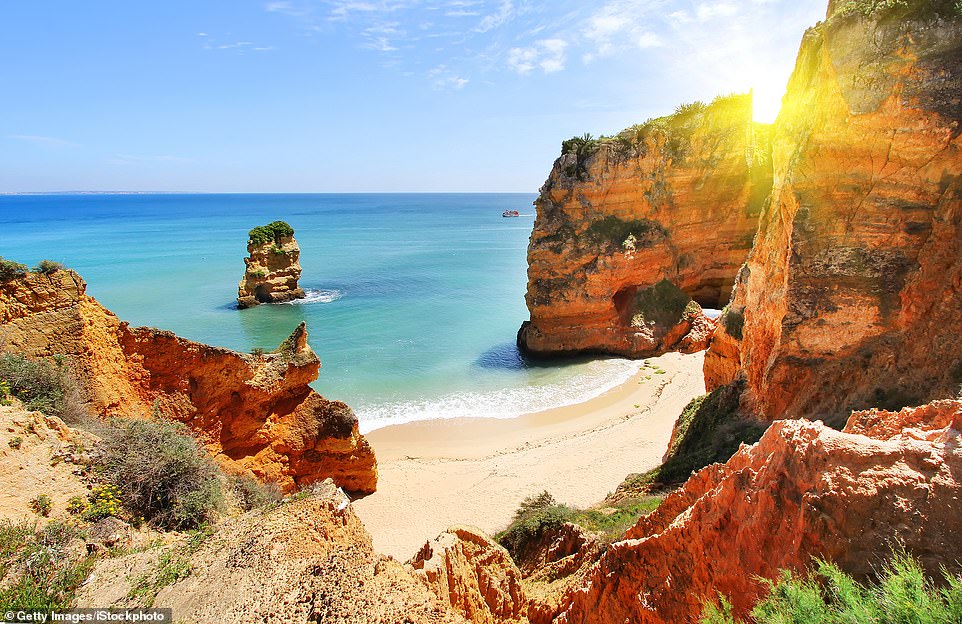 In Portgual, pictured, temperatures hover around the 23c mark in October, reaching 27c on hot days — but expect fog and thunderstorms from time to time

Tucked between Portugal’s capital of Lisbon and the famous Algarve in the country’s south is the Alentejo region.

Here you will find hundreds of miles of some of the wildest and least developed beaches in Europe, with barely a soul in sight.

Hire a car and set about beach-hopping: stop at Praia do Malhao for a jump in the tumbling topaz waves, or head to the south to laze on the butter-coloured sands at Praia de Odeceixe.

Beyond the beach, you’re here to eat — this is the ‘bread-basket’ of the country after all.

Try Tasca do Celso for seafood and wine, or drive along empty lanes in cork forests, stopping to explore sleepy villages filled with ceramics. Then, do what the locals do: swig wine and devour bolas de Berlim (custard doughnuts) while relaxing on the sand.

October weather report: Temperatures hover around the 23c mark, reaching 27c on hot days — but expect fog and thunderstorms from time to time. 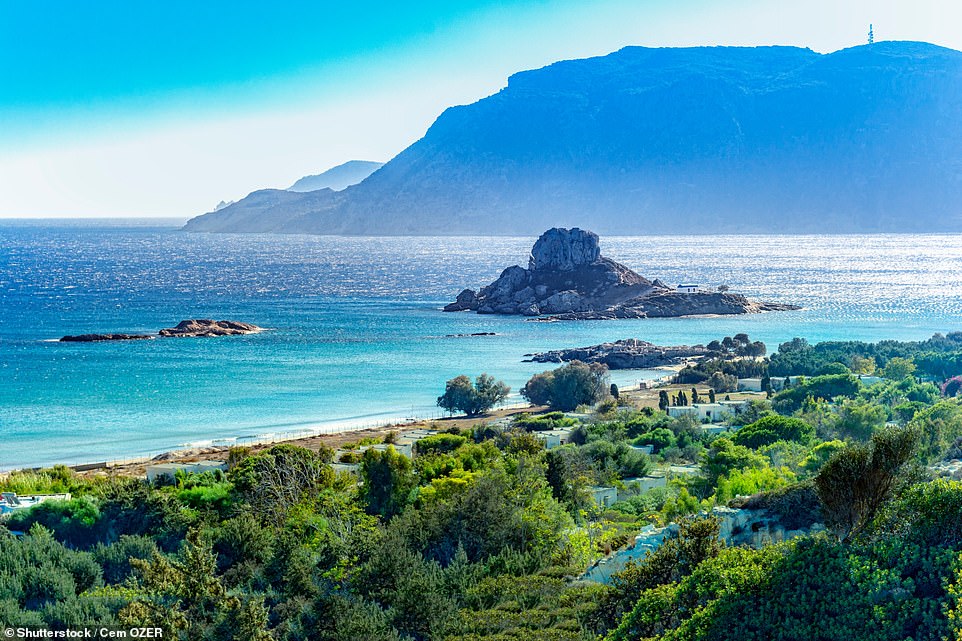 The Greek island of Kos, pictured. The average high in October is 22c, falling to 15c at night

Keen to kick back and do absolutely nothing? Michelangelo Resort and Spa is on Agios Fokas, the renowned stretch of coast on the eastern tip of the Greek island Kos. The hotel is surrounded by green gardens, it has a 120m-long infinity pool overlooking the Aegean Sea and has its own private beach.

If a break from lounging by the sea is required, visit the spa or book a tennis court. The resort is also a good base to explore the rest of the island — Kos town is only a 15-minute drive away, or you can venture out to see some of the ancient Greek sites.

However, with the amount of activities righy on your doorstep, you may never want to leave.

October weather report: The average high in October is 22c, falling to 15c at night. Expect sea temperatures of about 23c and 11 hours of daylight. 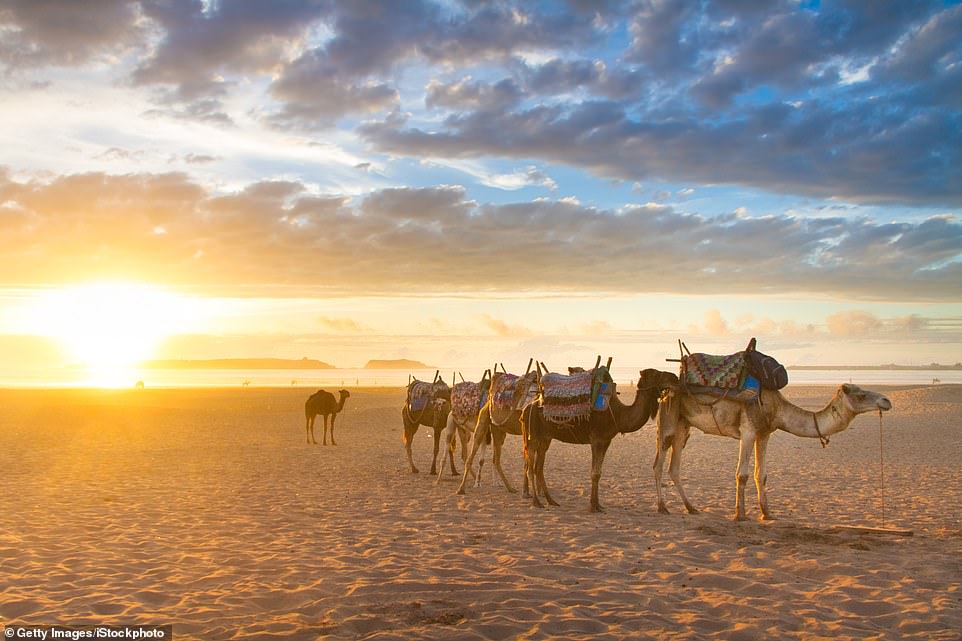 The coolest coastal city in Morocco, Essaouira, pictured, is a two-and-a-half-hour drive away from Marrakech

Swap the crowds of Marrakech for the coolest coastal city in Morocco, Essaouira, a two-and-a-half-hour drive away.

Despite the heat of the late-summer sun, the relaxed city never feels overwhelming hot, thanks to the cooling Alizes winds.

Perfect conditions, then, for exploring the vibrant blue-and-white medina, which is enclosed within sand-coloured ramparts and filled with little cafes and stalls selling leather handbags, chic jewellery and beautiful ceramics.

The beach is great for a stroll, but not for sunbathing — instead, stay in the 19th-century riad Heure Bleue Palais, with its rooftop suntrap pool and bijou spa.

October weather report: Expect daily highs of around 20c to 24c in Essaouira, dipping to as low as 15c at night.

Book it: Rooms at Heure Bleue Palais cost from £185 per night B&B (heure-bleue.com). EasyJet flies to Marrakech from £29.99 one way (easyjet.com). 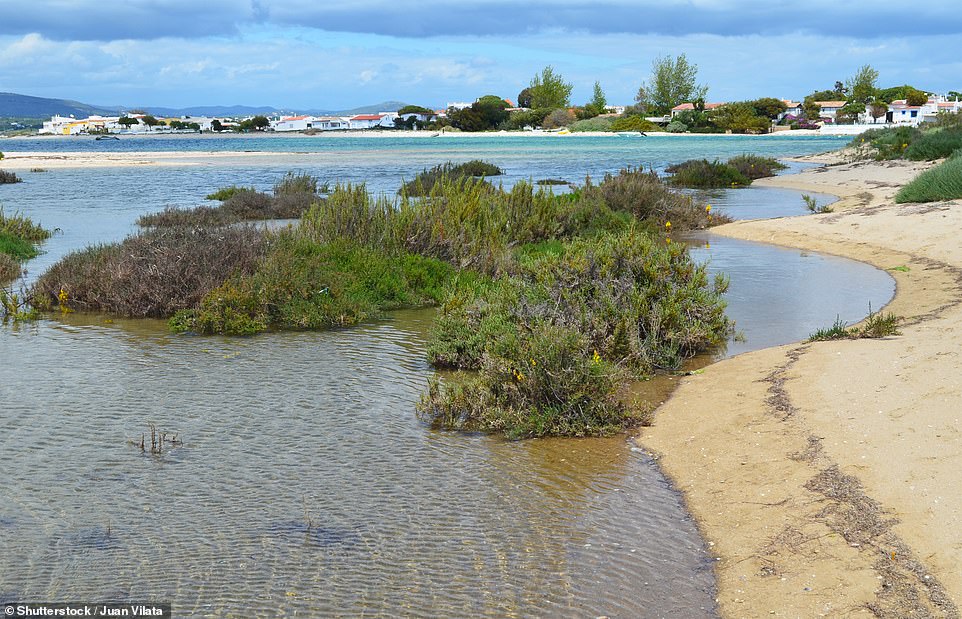 On a trip to Portugal’s Algarve, you can cycle through the Ria Formosa Natural Park, pictured

You don’t have to be a golfer to love the Four Seasons Fairways in Portugal’s Algarve (although if you are, this complex is the dream).

Pick from a selection of three-bedroom villas to one-bedroom apartments, all with their own pools and Jacuzzis, and spend your time hitting one of the 30 pristine golf courses in nearby Quinta do Lago.

When you’re not working on your hole in one, have a picnic on one of the nearby beaches, cycle through the Ria Formosa Natural Park, or head for a lunch of clams and a glass or two of white wine on the sundeck of restaurant Estamine, located just off the coast on a desert island.

October weather report: The average temperature is 19c with highs touching 25c. There are usually seven hours of sunshine each day and eight days of rainfall a month.

Book it: Four Seasons Fairways (fourseasonsfairways.com) offers seven nights in a two-bedroom villa from £918pp, based on two adults sharing on a self-catering basis. Flights with easyJet from London Gatwick to Faro cost from £74 return (easyjet.com). 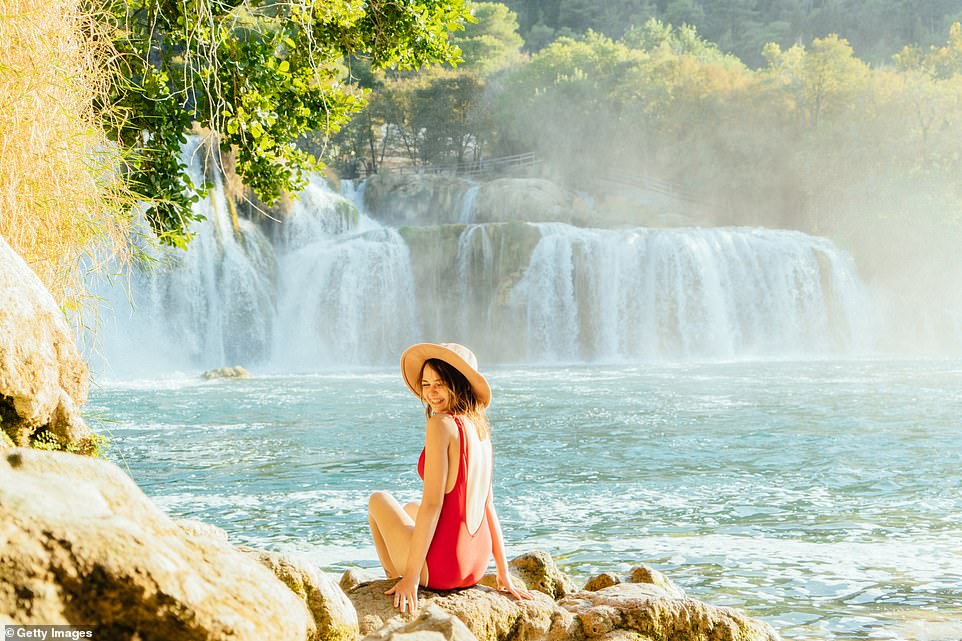 Forget the crowds of Split and Dubrovnik, instead have a jet-set holiday in the slick resort Sibenik, pictured

Forget the crowds of Split and Dubrovnik, instead have a jet-set holiday in the slick and stylish D-Resort Sibenik.

The 63-room contemporary hotel is set on its own peninsula a short boat ride from the medieval architecture and dazzling cathedral of Sibenik, which was used as a filming location for hit TV show Game Of Thrones.

It’s the sort of place where you can lounge on the beach or by the infinity pool by day, and stroll the creamy white stones of the old town by night.

If you want to go a little further afield, visit Krka National Park, which is packed with hiking trails and waterfalls, or hire a private boat and go for a swim by the uninhabited islands of the Kornati National Park.

October weather report: Temperatures can touch 25c at the beginning of the month, although, by the end, the daily highs can be more like 16c. Skies are usually clear. 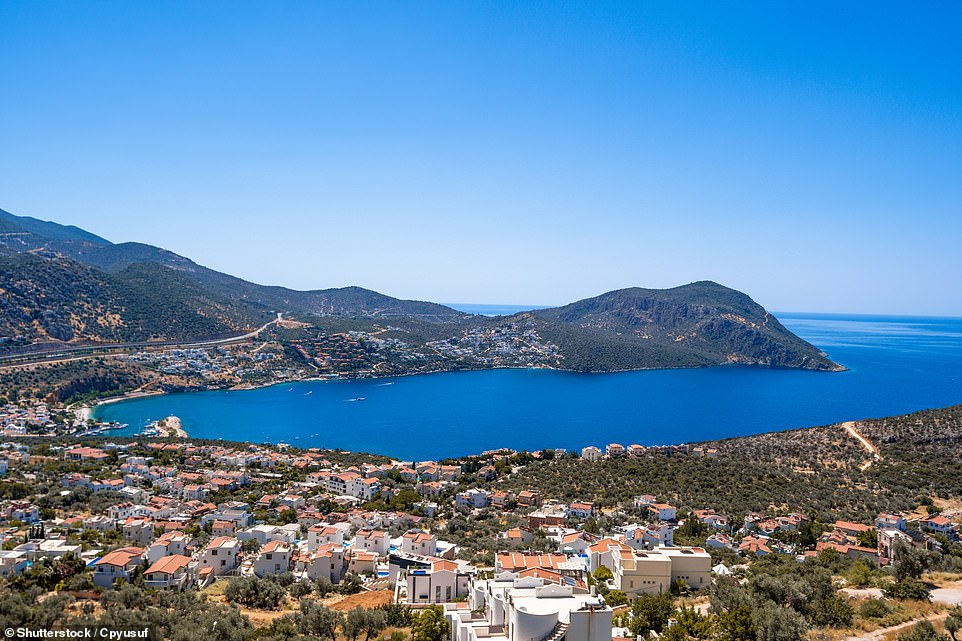 The beaches of the Lycian coast in Turkey, pictured, are a short ten minute drive from The Wolf’s Trail Cottage, a remote suntrap on Turkey’s Bozburun Peninsula

While the beaches of the Lycian coast are just a ten-minute drive away, this romantic, stone-built house is impossibly hard to leave, with its own infinity pool, bougainvillea-draped terrace for outdoor meals and sensational countryside views.

If sunbathing guilt kicks in, the owner is a qualified trekking guide, who’ll show you the plants and archaeological sites surrounding the cottage.

October weather report: The average temperature is about 20c, with highs of 26c and lows of 14c. The sea temperature is 25c. On average it rains for six days each October. 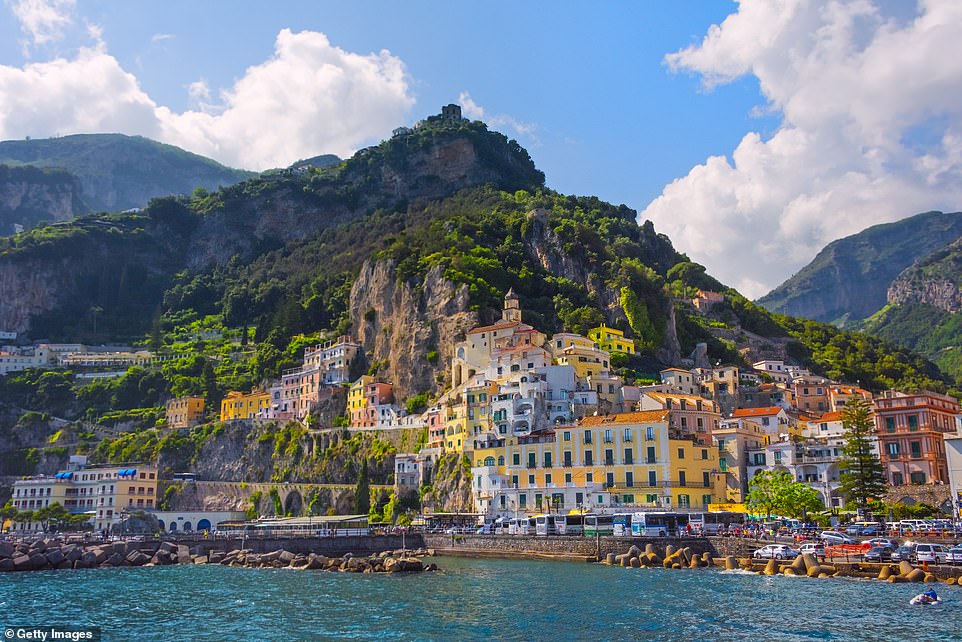 Perched on a cliff top on Italy’s Amalfi Coast, the Miramalfi Hotel has 49 rooms, many with balconies , and a saltwater pool overlooking the sea.

Opened by Francesco Mansi in 1956, the hotel is still in family hands and prides itself on serving traditional Italian cuisine.

Take a dip in the sea and cool off on the private bathing platform or, if the heat gets too much, the hotel can organise excursions to Pompeii or the 18th-century Royal Palace of Caserta, former royal residence of the King of Naples.

In the evenings, wander down to Amalfi town and grab a drink on the beach, which is surrounded by dramatic white-washed buildings.

October weather report: The average daily high is 23c, with an average of six hours of sunshine per day. But it can get down to 11c at night.