‘Keep your mouth shut you f***ing t***’: Emi Martinez yells abuse at a Dutch rival after Argentina’s World Cup win as Lionel Messi calls out ‘a fool’ in a TV interview before confronting Louis van Gaal

Argentina had looked to be cruising to victory when goals from Nahuel Molina and Lionel Messi put them into a two-goal lead heading into the dying minutes. However, a late brace from Wout Weghorst took the game to extra-time, and then penalties were needed to separate the two sides.

It was left to Martinez to save two spot-kicks, as Argentina progressed to the semi-finals following a bad-tempered game that saw an astonishing 14 bookings over the course of 128 minutes – six for the Netherlands, eight for Argentina – plus a yellow card for Argentina assistant Walter Samuel and a red card for Denzel Dumfries.

The two sets of players clashed after the final whistle, and Martinez was at the heart of it as he launched abuse towards the opposition dugout. ‘Keep your mouth shut you f***ing t***! I f***ed you twice!’ he said.

He was not the only Argentina player to struggle to control his temper as Lionel Messi was also furious and broke away from a TV interview to shout at one of Holland’s staff:  ‘What are you looking at? Fool!’

Messi then went to confront Dutch coach van Gaal, with assistant coach Edgar Davids having to play peacemaker after a match full of emotion.

Messi’s fury came just minutes after Argentina’s player had rubbed salt into the wounds of their Dutch counterparts by running straight in front of them after their shootout win. 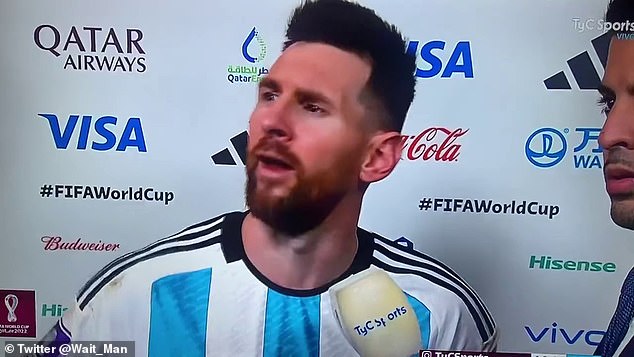 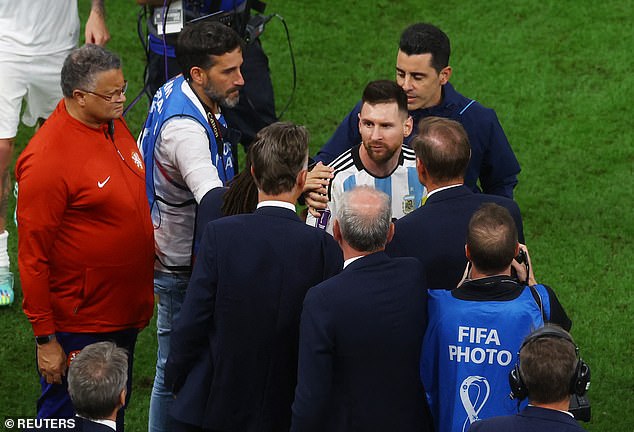 Several players made gestures towards the Dutch team who looked devastated following their gut-wrenching defeat.

While the match contained four goals, it was far from all about attacking flair and threatened to get out of control at times with both sets of players clashing on multiple occasions.

Spanish referee Antonio Mateu Lahoz went over to both benches to try to calm things down numerous times, but to no avail, and he was happy to show cards with great regularity.

Indeed, it was something of a miracle that no one was sent off until after the match had finished, when Dumfries was shown two yellow cards in a matter of seconds when he clashed with Argentina players. 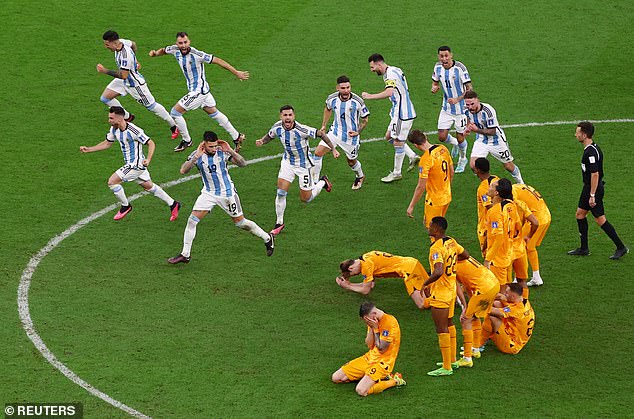 Messi was left bemused by the officiating, and insisted that Munoz should not be in charge of such an important match.

‘This match shouldn’t have ended as it did. I don’t want to talk about the referee because they sanction you, but people watched what happened,’ he told reporters.

‘We were afraid before the match because we knew how he was and I think FIFA has to review this, you can’t put a referee like him for these matches.’

Goalkeeper Martinez was even more damning, and also hit out at van Gaal for his comments ahead of the shootout. 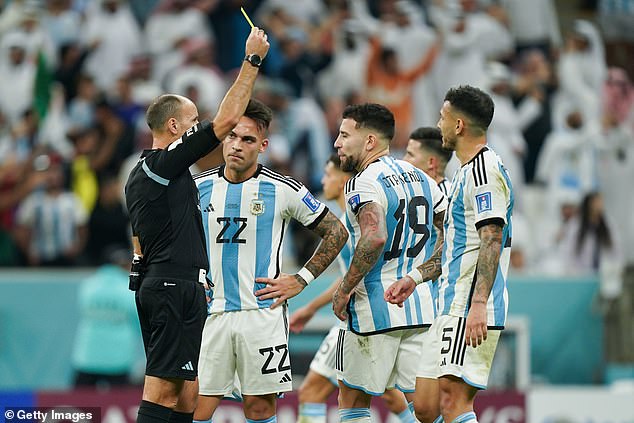 ‘Hopefully we don’t have that ref anymore… He’s useless! Van Gaal said they have an advantage if it goes to penalties, he needs to keep his mouth shut,’ he told BeIN SPORTS.

Argentina are now into the last-four, keeping their hopes alive of winning the World Cup for the first time since 1986.

They will face Croatia on Tuesday for a place in the final, but will do so without Marcos Acuna and Gonzalo Montiel who are both suspended after picking up their second bookings of the tournament against Holland.