Parents of small children know that lie-ins are a luxury, but putting a baby to bed late in the hope of them waking later the next day doesn’t work, a new study confirms.

Researchers from Virginia Commonwealth University investigated the association between the time a baby goes to bed and the overall amount of overnight sleep.

They found that putting babies to bed earlier, rather than later, was the best way to get them to sleep longer throughout the night and give parents more rest.

The sleep routines of 24 babies were monitored and they found putting them to bed later was counter productive and had no real impact on the time they woke up.

For every hour later a baby was put to bed they’d wake up eight minutes later the next morning but this was negated by more wakeful periods overnight.

Study authors recommend putting infants to bed at an ‘age appropriate’ time to promote ‘longer nighttime sleep’ and not try to get them them to ‘wake up later’.

Researchers from Virginia Commonwealth University investigated the association between the time a baby goes to bed and the overall amount of overnight sleep. Stock image

To test whether it was actually possible to use a later bedtime to get babies to wake later in the morning, and give parents a lie-in, researchers studied baby sleep habits.

They examined the sleep routines of 24 infants over three separate week-long periods at six weeks, 15 weeks and 24 weeks old.

Putting babies to bed earlier made them sleep longer throughout the night with fewer waking periods and in some cases a later wake-up time the next day.

The study found that, for every one hour earlier than their usual bedtime that infants were put to sleep, they slept 34.4 minutes longer that night.

Putting babies to bed later for a lie-in is not just counterproductive and inefficient but could also have an adverse impact on the health of the child over the long-term.

Multiple studies have shown the importance of a health sleep pattern for young children, particularly in the first year of their life.

Virginia researchers say parental behaviour in managing sleep patterns play a significant part in this process, especially around when bedtimes are set.

Certain aspects of healthy sleep hygiene routines have been shown to improve overall nighttime sleep in young children, including strict routines and low-stimulus activities before lights go out.

‘Implementing a consistent bedtime routine has been associated with numerous health outcomes that are well-described,’ the authors wrote.

The new study focuses on the associations between when babies are put to bed and how long they sleep throughout the night using actual sleep monitoring.

The latest recommendations suggest putting infants to bed at an age-appropriate hour, usually between 7pm and 8pm – but many parents aren’t following that advice.

A recent review of parental behaviour found that infants under six months of age are often put to bed much later, usually between 7pm and 11pm at night.

Volunteers were recruited from mums in their third trimester and others on the labour ward just before they had their baby. 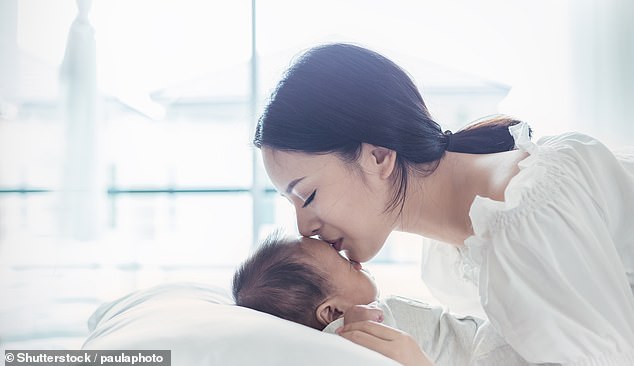 For every hour later a baby was put to bed they’d wake up eight minutes later the next morning but this was negated by more wakeful periods overnight. Stock image

The mums were all aged between 18 and 35 with no major pre-existing health conditions and all babies were born at full-term and weighing at least 5.5lbs.

At six weeks half the babies had a consistent bedtime routines at least five nights per week and that increased to 87 per cent of babies by 24 weeks.

The average bedtime routine – that is the process of getting the baby prepared to be put down including changes, feeding, bath and stories lasted up to an hour.

Results showed that infants’ nighttime sleep onset was often late and occurred between 7pm and 8pm on only one-fourth of the nights where data were recorded.

Infants who fell asleep earlier at night had a longer nighttime sleep duration, without influences on the next-day’s daytime sleep.

They found consistency was key to a good nights sleep for parent and child.

‘Keeping infants up later resulted in only minimal later wake-times the next morning.

With this in mind, the team say infants should be put to bed at an age-appropriate hour to promote longer nighttime sleep.

This is usually between 7pm and 8pm.

‘Further, our findings support the benefits of a consistent bedtime routine and not feeding infants to sleep, particularly in the earliest months of life.’

They also recommend putting babies to bed while awake as it helps them learn to fall asleep on their own.

Earlier sleep onset was also associated with a slightly earlier wake time the next morning, the authors found.

‘Infants with more consistent bedtime routines and not typically fed to sleep had longer nighttime sleep durations at 6 and 15 weeks of age,’ they wrote.

Few of the infants being studied regularly fell asleep between 7 and 8pm, with that only happening on about one-fourth of the nights they were monitored.

‘Instead, infants’ sleep onset was typically later, both in our sample (8:20-9:35PM) and in previous research such as the nationwide Sleep in America Poll (9:11PM average infant bedtime),’ they explained.

A common view, often held by parents and seen in this research, is that putting babies to bed later will see them sleep later the next morning.

‘Thus, it does not appear advantageous to keep infants up later for this reason alone,’ the authors explained.

The team say previous studies have shown that for children put to bed later as babies there is a greater risk of obesity by the time they are aged 2-6 years.

‘Our findings demonstrate that infants who fell asleep earlier at night also slept longer and keeping infants up later resulted in only minimal later wake-times the next morning,’ according to the study authors.

‘As such, infants should be put to bed at an age-appropriate hour to promote longer nighttime sleep and keeping infants up in hopes they will sleep in appears ineffective.

‘Further, our findings support the benefits of a consistent bedtime routine and not feeding infants to sleep, particularly in the earliest months of life.’

The research was published in the journal Sleep Medicine.