Keeping your pecker up! Great spotted woodpecker seems to be doing pull-ups in hilarious photos

Keeping your pecker up! Great spotted woodpecker seems to be doing pull-ups in hilarious photos

A mum of two was left stunned and in stitches of laughter after spotting this woodpecker apparently completing a series of ‘pull ups’ on her garden fence.

Helen Ormersher, 44, had been feeding the birds in her garden in Bala, North Wales, when she noticed the great spotted woodpecker working on its fitness on the wire fence.

The passionate photographer was quick to grab her camera and snap a shot of the little featherweight champion in action – who appeared to be pulling himself up with his tiny claws and puffed out chest. 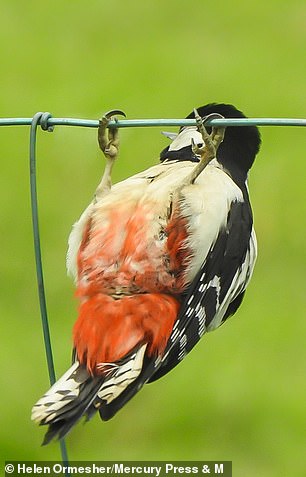 After sharing her photos on Facebook the amused mum racked up 1,000 likes and shares from friends and followers who all agreed it looked like the little chirper was hitting the gym.

Helen said: ‘One afternoon I went out to refill the bird feeders and when I came back in and looked through the window I noticed a Great Spotted Woodpecker hanging on the fence. 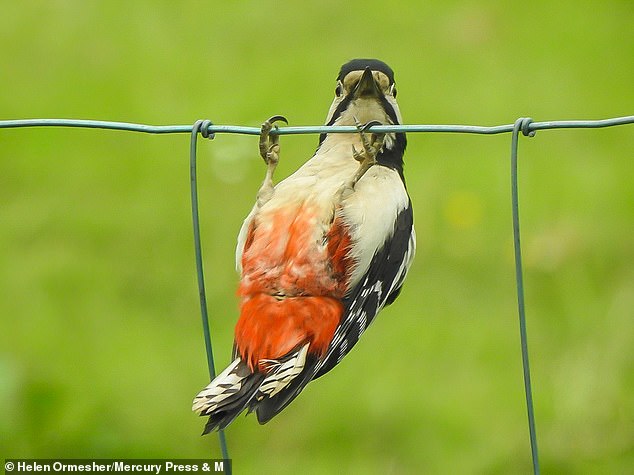 Using its claws, the bird pulls itself up and down as captured by Helen and shared online

‘It caught my eye as he looked so comical, as though he was doing pull-ups.

‘That’s when I grabbed my camera and took a few shots.

‘It looked just like he was at the gym.

‘I’ve been overwhelmed by the response online, everyone has seen the funny side of it!’