By Caitlyn Becker For Dailymail.com

Kelly Clarkson is not here for unflattering photos or fake feuds.

The Grammy winner took to Twitter to deny new claims of a brewing feud with her fellow American Idol winner Carrie Underwood on Thursday.

She also took a moment to call out the magazine who published news of the rumored beef for using an unflattering photo of her which she said showed the ‘worst expression.’

Squashing rumors: Kelly Clarkson is not here for unflattering photos or fake feuds and took to Twitter to call out a magazine for falsely claiming she is in a fight with Carrie Underwood and using a terrible photo on the cover

Kelly tweeted: ‘Someone just sent me this & I’m like why does she get the good pic & I have the worst expression I’ve ever made w/zero muscles being used in my face ha!’

The message included an image that was snapped of a magazine rack with a stack of Star Magazine’s that blazed with the headline ‘Secret Feud Explodes!’

The cover featured the incendiary headline written over a composite image of Kelly and Carrie Underwood.

Star claimed in bullet points that the stars were ‘trashing each other to friends’ and ‘Carrie doesn’t know who she is messing with.’ 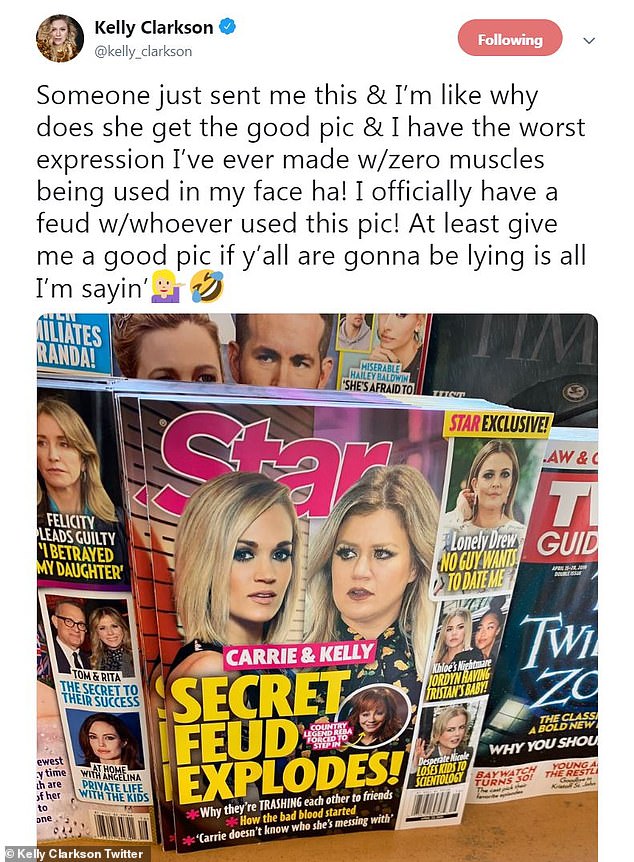 Lies! Kelly had no qualms about shutting down the claims on the cover of Star that she is in a ‘secret feud’ with her fellow American Idol winner and expressing her distaste for picking a bad picture of her on the cover

‘I officially have a feud w/whoever used this pic!’ Clarkson continued in her tweet. ‘At least give me a good pic if y’all are gonna be lying is all I’m sayin’

A user responded back to the hitmaker: ‘Carrie didn’t get the bad pic because there is no bad pic of Carrie’ 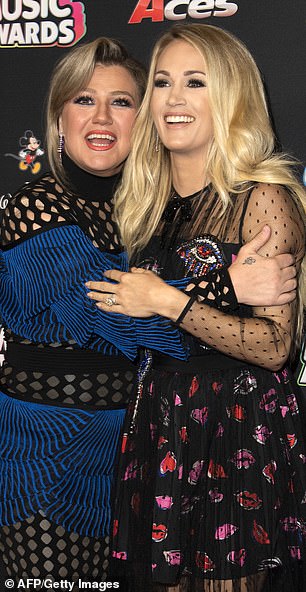 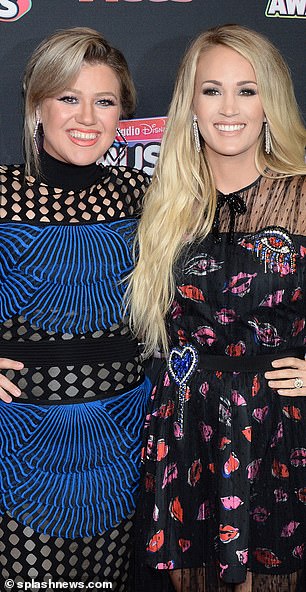 Good photos, good friends: Kelly and Carrie are actually good friends in real life and, according to the Since You’ve Been Gone hitmaker, are not involved in any kind of feud

That sassy quip elicited a hysterical exchange from Kelly who responded with a self deprecating clap back.

‘Hahaha touché,’ she laughed. ‘Well, I have PLENTY of rough ones ha! But I guess it builds character and keeps me humble.

Adding: ‘This is what I tell myself.’

Kelly and Carrie who won the first and fourth seasons respectively of American Idol and are, in fact, good friends in real life. 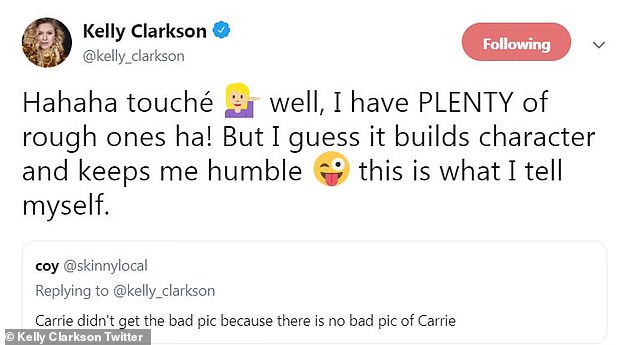 Jokes! A fan claimed that Carrie Underwood has ‘no bad pic’ out there which prompted a sweet and self deprecating exchange with Kelly

The original article also claimed that Kelly’s former mother-in-law Reba McEntire was the one trying to mediate peace between the iconic singers in their faux feud.

Despite the fact that the star squashed the whole story as being fake, Kelly’s fans loved the idea that the country music legend was stepping in.

On user tweeted:  ‘I know this drama with @carrieunderwood isn’t real, but I’d love a Real Housewives-style reunion with @reba as a mediator.’

Another responded: ‘I like the Reba as the United Nations angle tho’ 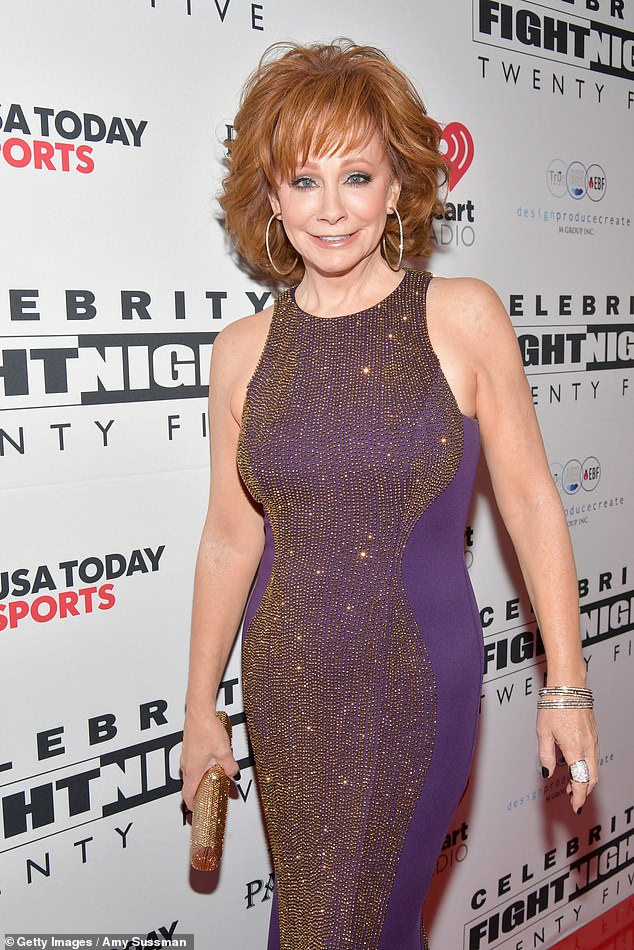 Loving it: Despite the false story, fans were loving the claims that Reba McEntire was forced to step in and mediate the brewing beef

Hysterical: ‘I’m totally here for the Reba The Mediator subplot,’ the fan wrote with a photo of the star from Tremors

Kelly even responded back to one fan who shared an image of Reba from the from the film Tremors.

‘I’m totally here for the Reba The Mediator subplot,’ the fan wrote.

‘A #tremors call back! Nicely done,’ Kelly said with a crying laughing emoji.

Kelly and McEntire have an extremely close relationship as she is married to Reba’s former stepson Brandon Blackstock. 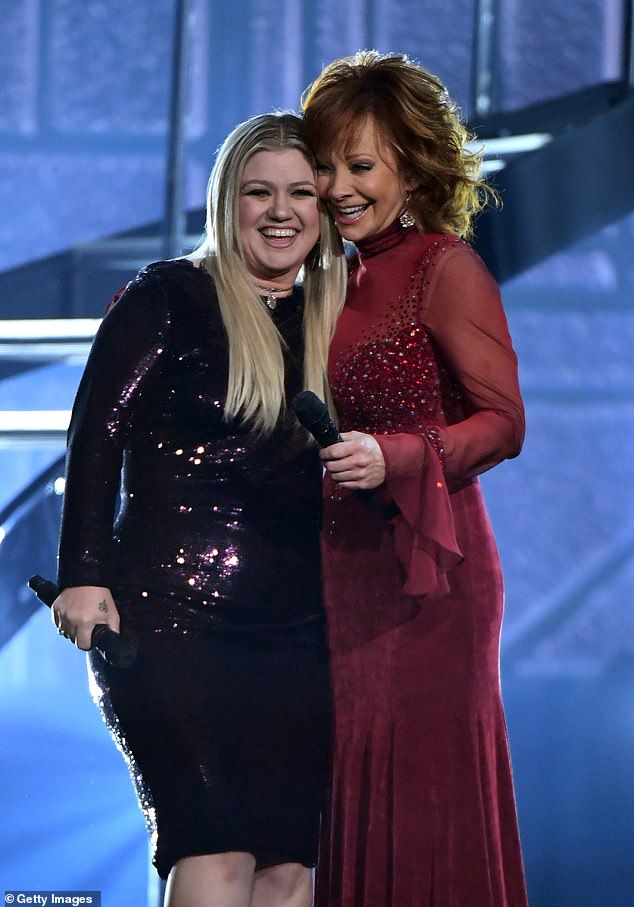 Family! Kelly and McEntire have an extremely close relationship as she is married to Reba’s former stepson Brandon Blackstock