‘When the end is in sight’: Kelly Ripa teases shirtless husband Mark Consulos as she bends over in another cheeky Instagram snap

Kelly Ripa and Mark Consuelos have never been ones to be shy when it comes to showing off their sense of humors on social media.

And on Monday the hot and heavy couple couldn’t resist teasing her 2.9 million Instagram fans and followers by posting another cheeky display of comedy.

‘When the end is in sight……,’ Ripa wrote along with a photo of herself bending over on her all-fours in a one-piece swimsuit and Consuelos staring directly at her derriere with a big beaming grin.

Nod and a wink: Kelly Ripa, 50, and Mark Consuelos, 50, showed off their sense of humor and infectious connection with each other with a cheeky photo showing the talk show host bending over in a swimsuit to the enjoyment of her beaming husband

What makes the photo ever more impactful: the golden sun that’s dramatically peaking through a patch of clouds just behind Consuleos.

The Riverdale star, 50, went shirtless in the sweet snap, which was the prefect opportunity for him to show off his washboard abs.

Ripa’ mile-wide grin was equally hilarious as she stared directly into the camera with her blonde tresses looking slightly unkempt.

The couple took the funny photo just feet from a posh pool in the backyard of an upscale home. 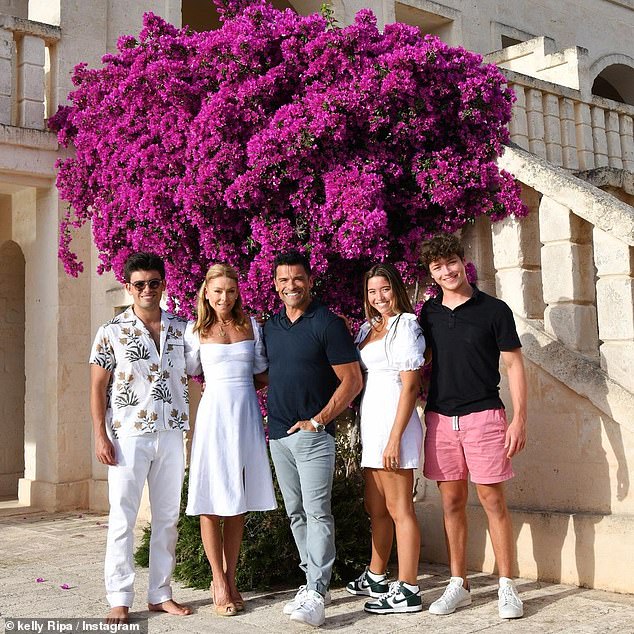 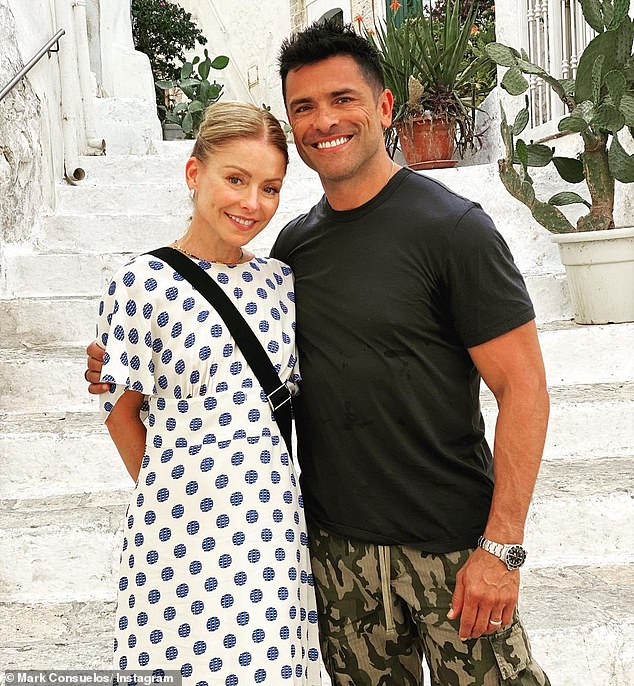 Fan favorites: The Live With Kelly And Ryan host left a lot of her Instagram followers in stitches with her cheeky new photo, which resulted in a slew of comments from people who just can’t get enough of the handsome couple

The Live With Kelly And Ryan host left a lot of her Instagram followers in stitches with the photo, which resulted in a slew of comments from people who just can’t get enough of the handsome couple.

‘More of this from both of you please…’ wrote one adoring fan of the duo.

One person showed off their comedic touch by commenting, ‘And now the end is near.’

A number of people well versed with the couple’s close relationship with their daughter Lola shared comments like, ‘Waiting to hear what Lola says…’, and ‘I’m here waiting for Lola’s comment.’

One person summed up many fans’ devotion for the couple by commenting, ‘Lola is going to hate this one… you 2 are an amazing couple!!!’ 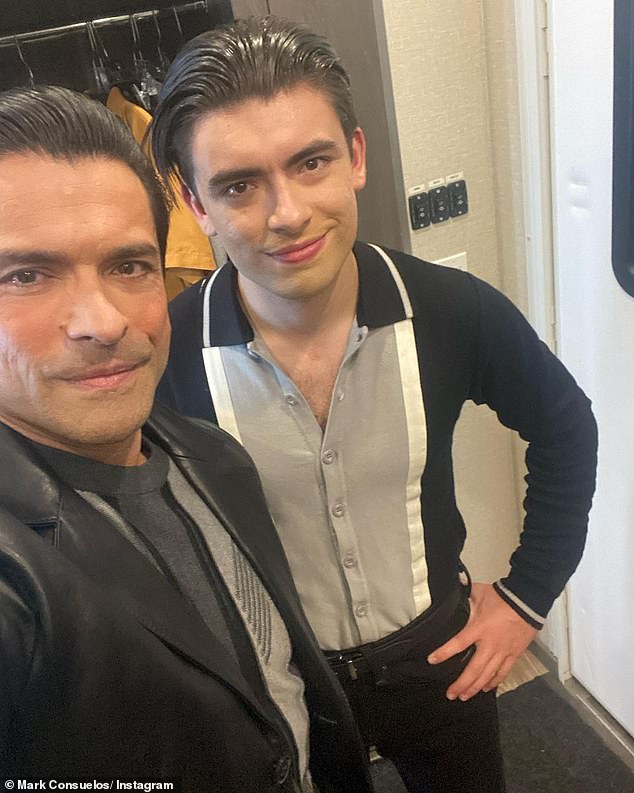 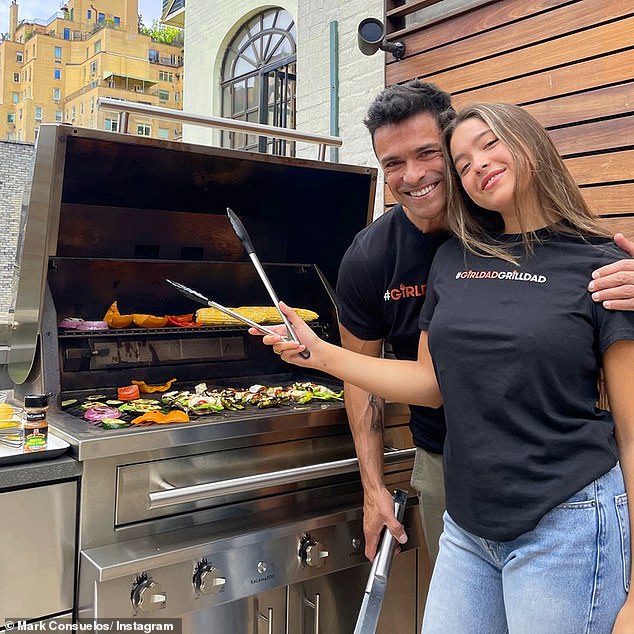 Daddy’s girl: The couple’s only daughter turned 20-years-old on June 16 this year

The overwhelmingly positive and supportive comments kept flooding in with lines like, ‘You two… get it! #forreal #hottiesforlife’ and ‘This is just epic. Period. I don’t even have anything clever to say. It’s just hot!’

Ripa and Consuelos, who just celebrated their 25th wedding anniversary in May, are even seeping into the hearts and minds of fans’ spiritual worlds.

‘god bless kelly & mark… i whisper this at the end of my nightly prayers,’ wrote one admirer.

The couple have three children together: sons Michael, 24, and Joaquin, 18, and daughter Lola, 20.

When their youngest son heads off to college this coming semester, Ripa and Consuelos will officially be empty-nester parents, which is sure to heighten family emotions in the coming weeks. 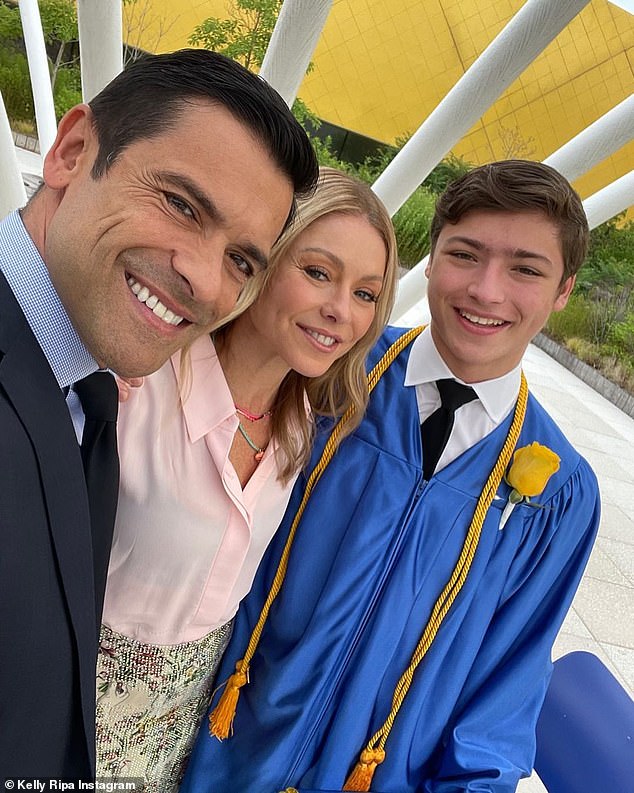 Empty nest phase: Following his high school graduation, the couple’s youngest son, Joaquin, is heading off to college this coming semester, which will make Ripa and Consuelos official empty-nest parents