Kelly Ripa has been filming morning show Live With Kelly And Ryan while ‘secretly’ quarantining on a Caribbean island.

Ripa, 49, is filming her segments from the comfort of the island getaway where she has been spending the lockdown with husband Mark Consuelos, 49, and their three kids.

A source told Page Six on Thursday that Ripa and her family were already staying at their island hideaway in March when the shelter-in-place order was put into effect.

Once the panic surrounding the coronavirus began to escalate, the family allegedly made a collective decision ‘to stay put’ after feeling ‘stuck’ because of coronavirus travel restrictions.

Far away from home: Kelly Ripa, 49, has been filming her segments of Live With Kelly And Ryan from the comfort of a Caribbean island where she has been ‘secretly’ quarantining since March 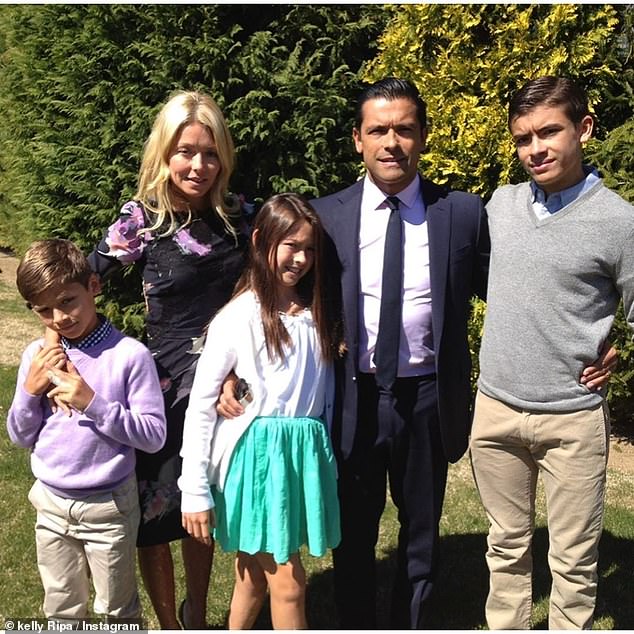 Kelly Ripa, 49, is spending lockdown on an island getaway with husband Mark Consuelos, 49, and their three kids – sons Michael, 22 and Joaquin, 17, and daughter Lola, 18. Pictured is a throwback photo Ripa posted of the family on her Instagram account

While they are away, Ripa and her family have been allowing some close friends to reside in their lavish Manhattan home ‘for the past few months’.

‘The family was on a trip in the Caribbean when told to shelter in place and decided to stay put,’ stated one source to People, who attended a virtual town hall on Thursday with ABC employees.

The source claimed that Ripa discussed her Caribbean trip and how mind boggling it was for her to see the world change ‘three days’ after they arrived due to COVID-19.

‘I mean, everything shut down; the government shut down; our country shut down. I hate to use the word stuck, but we were. We decided to stay where we were,’ said Ripa.

For Ripa it was ‘distressing’ to deal with the fact that her and Mark’s parents were scheduled to join them on the island a week after their arrival, but would be unable to due to travel bans.

‘Lucky for us, we had our three children. And then, you know, it was supposed to be a two-week trip and we wound up going right back to work.’ 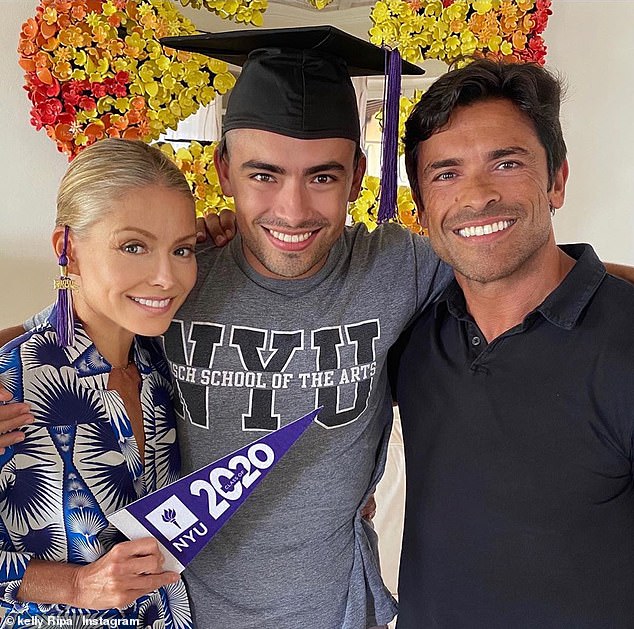 Tropical lockdown: Ripa has been ‘secretly’ quarantining on a Caribbean island with husband Mark Consuelos, 49, and their three kids; Kelly pictured with eldest son Michael and husband Mark on Instagram this Thursday when they celebrated Michael’s NYU virtual graduation

As for working remotely amid COVID-19, Ripa has apparently found relief in hosting her show and dedicating herself to her regular schedule.

‘Ryan and I both decided it was better to do the show, because we just felt like in with everything that was going on in the world that perhaps, some normalcy of just doing what we normally do, even though it was like in very unusual circumstances, would be the best thing for us,’ she explained during the ABC town hall.

Kelly continued: ‘I think people are unsettled everywhere, everywhere, across the country and across the globe. So, I think it’s been a great benefit for us to have each other, to have our viewing audience and just to hear Brian Chapman’s voice in my ear, our director, first thing in the morning. It just normalizes everything as abnormal as it all is’ 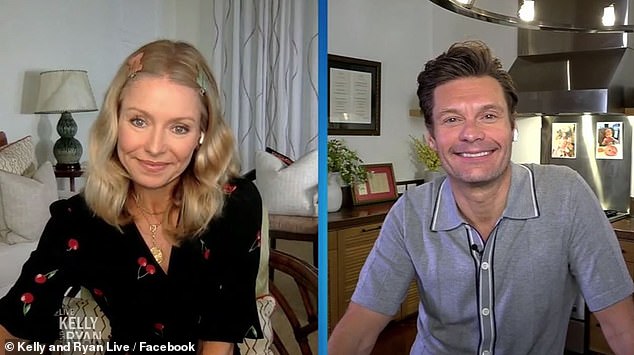 As for working remotely amid COVID-19, Ripa has apparently found relief in hosting her show and dedicating herself to her regular schedule; Kelly and Ryan pictured on Live on May 14

Page Six’s source added that: ‘Kelly’s been a good soldier, as she always has been. It’s important to her to keep working.’

On Thursday, Kelly and Mark celebrated their eldest son, Michael’s, virtual graduation from New York University from the comfort of their island abode.

‘And just like that you graduated college. MJC, the joy and pride you have brought our family is indescribable. I love you with all my heart,’ wrote Ripa, who shared a slew of photographs of her son through the years.

One photo showed Ripa and Mark posing with Michael as he donned his graduation cap and an NYU t-shirt.

She also posted a ton of throwback photos that featured herself, Mark, and Michael through the years. 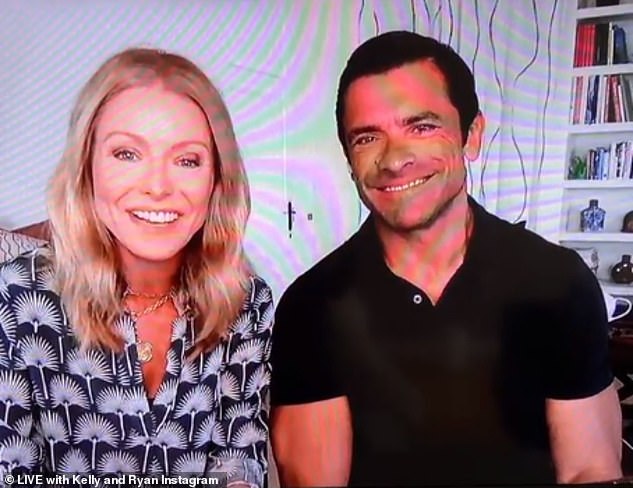 Hosting gig: On Monday, Consuelos filled in as co-host on Live With Kelly And Ryan, while Seacrest took a short break from his hosting gigs due to alleged ‘exhaustion’; Kelly and Mark pictured on Live on Monday. Seacrest thanks Mark for filling in on his return

On Monday, Consuelos filled in as co-host on Live With Kelly And Ryan, while Seacrest took a short break from his hosting gigs due to alleged ‘exhaustion’.

Fear surrounding Seacrest’s health began on Sunday evening during the American Idol finale on ABC where he appeared to be struggling for words.

Fans began to speculate that the longtime host had had a stroke on air, but Ryan refuted that claim.

He returned to Live on Tuesday and he thanked Mark ‘for filling in yesterday and remarked on the actor’s impressive hosting skills.

‘He’s so good at it, also, all the very kind well-wishes for my exhaustion, working around the clock,’ he said.