Kellyanne Conway on Friday charged Nancy Pelosi with being intimidated by ‘the men around her’ into impeaching Donald Trump after the speaker called earlier allegations from the White House counselor ‘sexist.’

In a fiery, 25-minute exchange with reporters on the White House driveway, Conway argued Pelosi changed her mind about impeachment and did so because of pressure from her male colleagues.

‘She does the worst thing a woman in power could do, which is she just changes her mind because the men around her said “Change your mind; we need impeachment,'” Conway said. 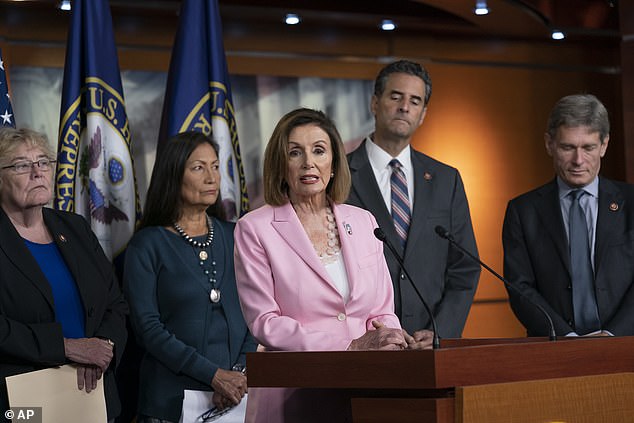 Speaker Pelosi has accused Conway of being ‘sexist’

Asked if she was saying the speaker was intimidated by men into the matter, Conway replied: ‘Something happened. I don’t know what she had for lunch – an equivocation sandwich.’

The White House has launched verbal grenade after verbal grenade in their defense of the president, including several zingers throw by Trump himself, since Pelosi announced the start of a formal impeachment inquiry on Tuesday.

Conway made close to the same charge about Pelosi on Thursday at the Atlantic Festival, when she said the speaker changed her mind on impeachment.

Pelosi was dismissive of the Trump adviser when she appeared on MSNBC’s ‘Morning Joe’ Friday morning.

‘Why would I have to comment on something she said?,’ Pelosi said when the show’s hosts asked about the allegation.

The speaker added: ‘I didn’t change my mind. The facts changed the situation, and they cannot be ignored no matter how sexist she wants to be.’

‘Morning Joe’ co-host Mika Brzezinski observed that Republicans are ‘trying to make this about you.’

It’s unclear what men Conway was referring to in Friday’s allegation.

Some of the committees investigating impeachment matters are chaired by men including Adam Schiff of the House Intelligence Committee, Jerry Nadler of the House Judiciary Committee, Eliot Engel of the Committee on Foreign Affairs and Elijah Cummings of the House Oversight and Reform Committee.

All are allies of Pelosi, who is known to rule her Democratic caucus with an iron fist and keep a tight grip on her power. Previous attempts by younger lawmakers to remove her from her top leadership position didn’t work.

Schiff has been a particular Trump target, who the president dubbed ‘Liddle’  Adam Schiff’ in a tweet storm Thursday and into Friday.

Pelosi has refused to back down to White House demands before, including her refusal to fund President Trump’s border wall, which resulted in a government shutdown and her canceling his State of the Union address.

Then there was the now infamous December 2018 Oval Office meeting, when Democrats had retaken control of the House in the midterm election and the president tried to undercut Pelosi’s position in budget negotiations.

‘Mr. President, please don’t characterize the strength that I bring to this meeting as the leader of the House Democrats, who just won a big victory,’ she responded. 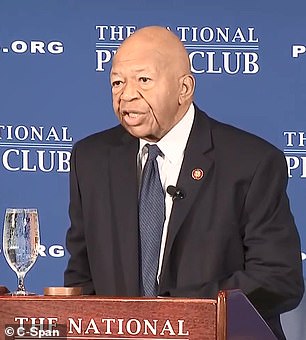 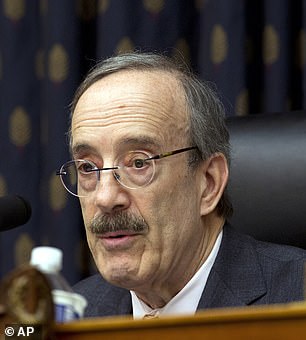 It’s unclear what men Conway was referring to; Some of the committees investigating impeachment matters are chaired by men including (from top right) Adam Schiff of the House Intelligence Committee, Jerry Nadler of the House Judiciary Committee, Eliot Engel of the Committee on Foreign Affairs and Elijah Cummings of the House Oversight and Reform Committee. All are Pelosi allies

The resulting image of her walking out of the White House in a bright orange coat and putting on her sunglasses went viral.

It’s also not the first time the speaker and Trump adviser have clashed.

During a May meeting at the White House on infrastructure, after Trump delivered a five minute lecture to the Democrats and then stormed out, the two women got into verbal fisticuffs.

Taking aim at Trump, Pelosi said she was ‘not surprised’ he had left and told the room how Presidents Thomas Jefferson and Teddy Roosevelt would have acted differently.

Conway fired back, asking the Democratic leader if she had a ‘direct response to the President’.

Pelosi replied: ‘I’m responding to the President, not staff’ – in a quote provided by Pelosi’s spokesman.

Moments later, as the room emptied, Conway turned to Pelosi and said sarcastically: ‘Great, that’s really pro-woman of you’. 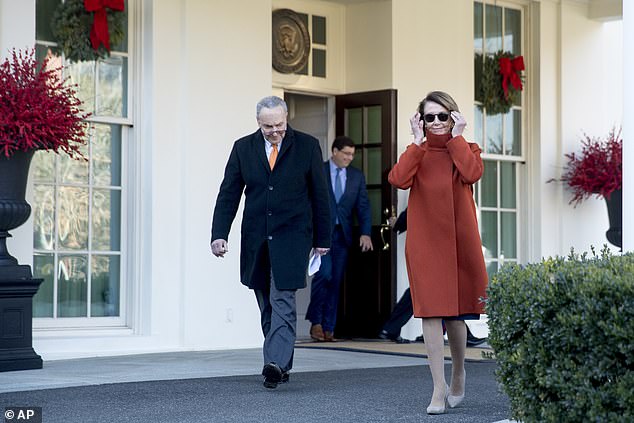 Conway took her complaints public in a Fox News interview where she accused Pelosi of treating her like her maid.

‘Because let’s face it, she is the sixth-most rich member of Congress. She treats everybody like they’re her staff,’ claimed Conway.

‘She treats me like I’m either her maid or her driver or her pilot or her makeup artist. And I’m not. And I said to her, “How very pro-woman of you!” per usual, because she’s not very pro-woman. She’s pro-some-women. A few women,’ she vented.

Pelosi refused to get into the matter when asked about it at one of her weekly press conferences.

‘I’m not going to talk about that. I responded as the speaker of the House to the president of the United States,’ she said.