White House counselor Kellyanne Conway slammed incoming Democratic lawmaker Alexandria Ocasio-Cortez on Tuesday, calling her ‘this 29-year-old congresswoman who doesn’t seem to know much about anything.’

Her put down of the progressive star, who became a national figure when she beat New York Rep. Joe Crowley in their primary campaign, comes a day after Ocasio-Cortez accused outgoing White House Chief of Staff John Kelly of ‘cowardice.’

Conway began with a defense of Kelly before she turned her fury on Ocasio-Cortez. 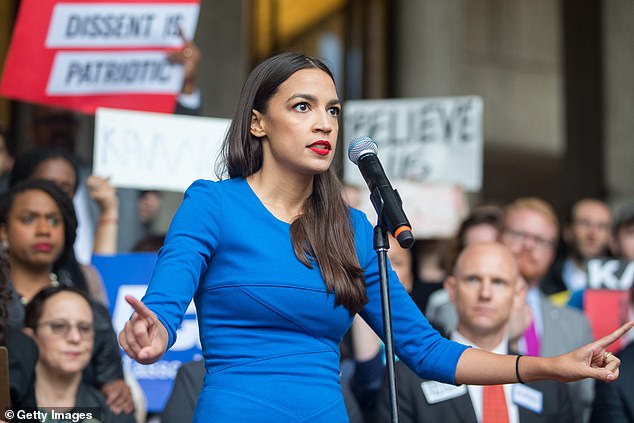 ‘He is in his fifth decade of public service and this country owes him a debt of gratitude, not the nonsense that’s been spewed about him even recently from the left and from this 29-year-old congresswoman who doesn’t seem to know much about anything when you ask her basic concepts about the economy, the Middle East, military funding, really embarrassing,’ she said on ‘Fox & Friends.’

‘And for her to even use a slur against him yesterday and I won’t repeat of name of the slur but let me stand up for General John Kelly, he’s done a magnificent job for this country for almost 50 years and that includes here at the White House as our chief of staff for about a year and a half,’ Conway added.

Ocasio-Cortez on Monday said Kelly should apologize to Rep. Frederica Wilson, who, in remarks at the White House, he called an ’empty barrel’ and accused her of grandstanding at a Florida event by taking credit for securing federal funding for a new building.

His attack proved to be inaccurate.

‘John Kelly was straight up exposed for lying about @RepWilson in comments aimed at discrediting her,’ she wrote on Twitter on Monday. ‘He absolutely owes her an apology, and his refusal to do so isn’t a sign of strength – it’s cowardice.’

In October, after Kelly made his remarks, Wilson was the subject of multiple threats and was unable to cast votes in Congress for a week.

Video of the event showed that Kelly’s attack on Wilson was wrong. Instead, Wilson had talked about her bill that helped fast-track the naming of the building after two slain FBI agents.

Critics have leaped on several misstatements from the incoming lawmaker.

In a July, Ocasio-Cortez called Israel’s presence in the West Bank, a Palestinian territory, as an ‘occupation.’ She later walked back the comment. 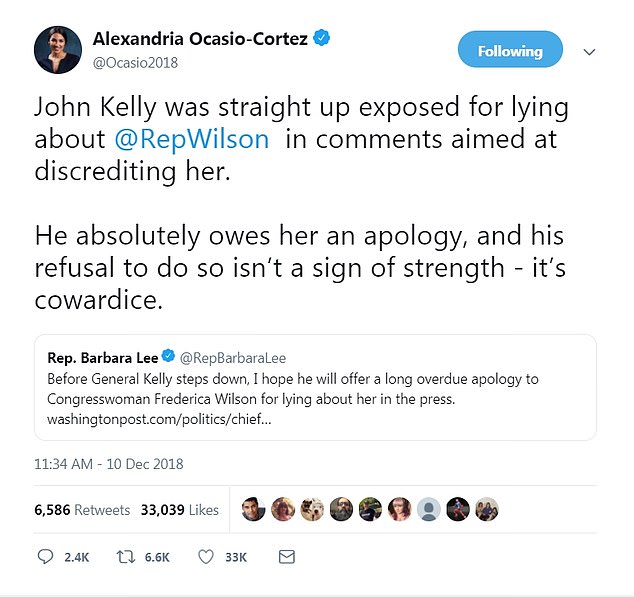 Ocasio-Cortez is calling on Kelly to apologize to Rep. Frederica Wilson for an attack on her that proved to be false 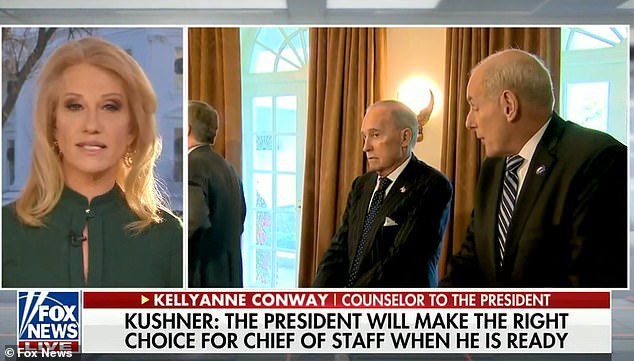 In November, former Alaska Gov. Sarah Palin slammed Ocasio-Cortez when the incoming congresswoman said there were three chambers of Congress (there are two: the House and the Senate).

She tried to correct herself.

But her correction was incorrect: the three chambers are government are the White House, Congress, and the Supreme Court.