He is returning to his role of radio psychiatrist Dr. Frasier Crane in the upcoming reboot.

But Kelsey Grammer put work aside to enjoy some quality time bonding with his family on Saturday.

The actor, 66, beamed with joy as he headed to lunch at Nobu Malibu with his wife Kayte Walsh, 40, and their children Faith, eight, Kelsey, six, and Auden, four.

Family man! Kelsey Grammer enjoyed some quality time with his wife Kayte Walsh and their three children at Nobu Malibu on Saturday

Kelsey couldn’t have looked any happier grabbing lunch with his young children at the celeb-favorite restaurant.

The Cheers actor embraced the beachfront vibe with his clean white button down shirt, dark blue shorts, and trainers.

Kayte looked stunning in a floral, boho-chic blue dress that billowed with the breeze as she wrangled their children.

The beauty swept her blonde tresses up into a messy and beachy bun with loose wisps of hair framing her complexion. 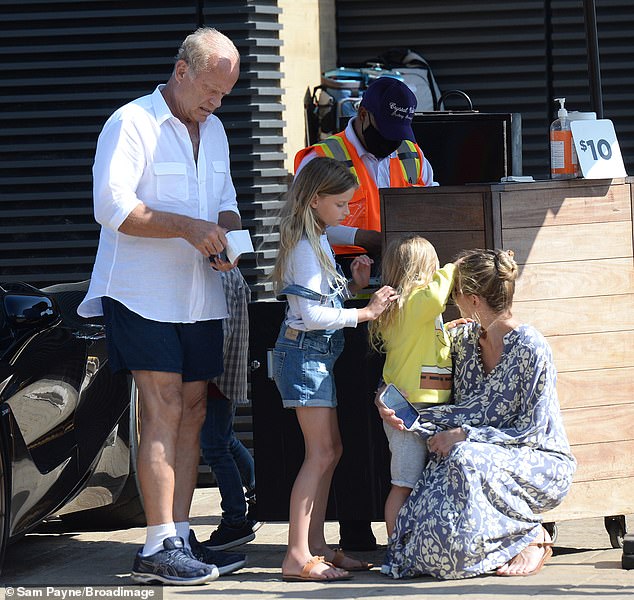 Paying his dues: The actor appeared to be settling his bill with the valet 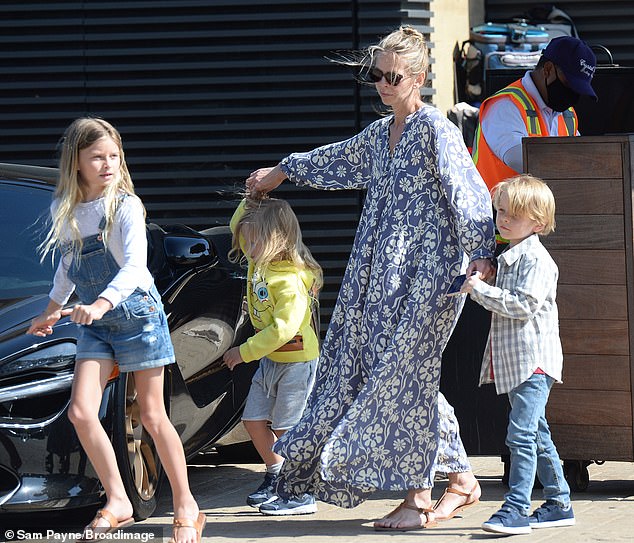 Doting mom: Kayte looked stunning in a floral, boho-chic blue dress that billowed with the breeze as she wrangled their children

While Kayte caroled the kids, Kelsey appeared to be paying the valet.

Kayte knelt on the ground as she fussed over one of their children, clad in a Spongebob Squarepants sweatshirt.

There was no denying just how happy Kelsey looked. Perhaps part of the reason for his smile was his upcoming Frasier reboot. 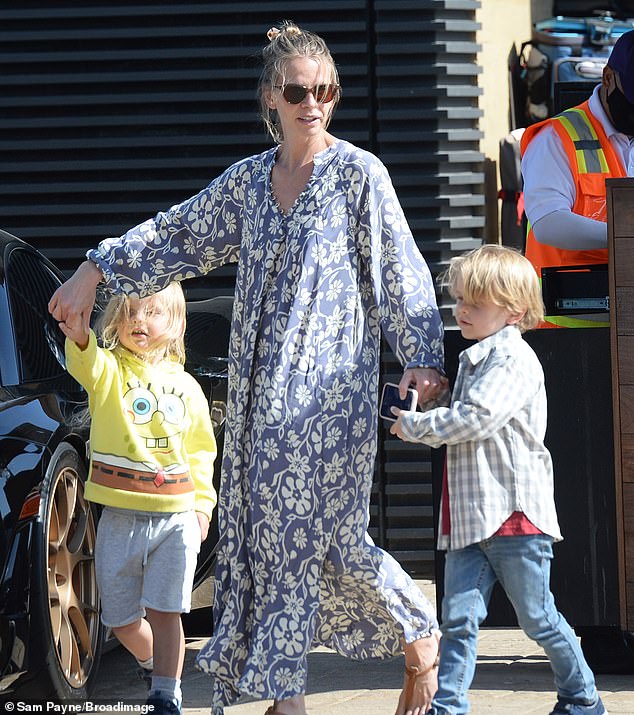 Oh boy! The youngsters held hands with their adoring mother as they strolled across the parking lot 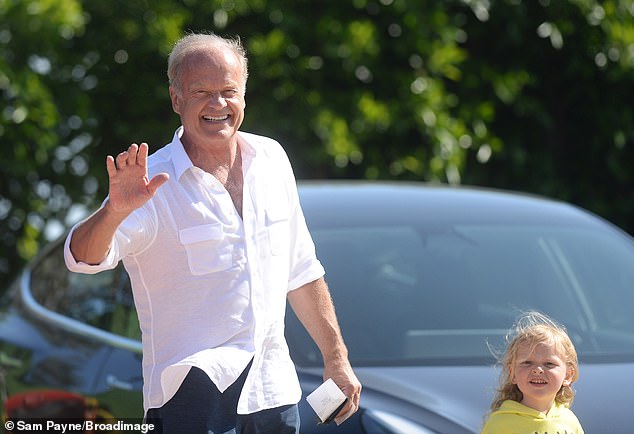 Happy camper! The actor beamed with joy and flashed a friendly wave

It was recently confirmed Kelsey will be reprising his role as Dr Frasier Crane as Paramount+ announced the beloved show will be part of its new lineup.

‘I gleefully anticipate sharing the next chapter in the continuing journey of Dr. Frasier Crane,’ the TV and film director said, according to The Hollywood Reporter.

He added: ‘Having spent over 20 years of my creative life on the Paramount lot, both producing shows and performing in several, I’d like to congratulate Paramount+ on its entry into the streaming world.’

Talk of a reboot has been rumbling since 2019 and according to The Huffington Post, the series is set to air in 2022. 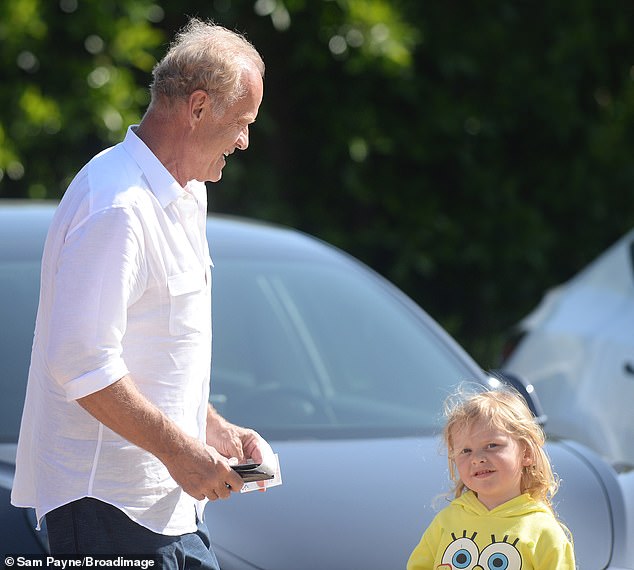 Aww! Grammer cast an adoring smile upon his son 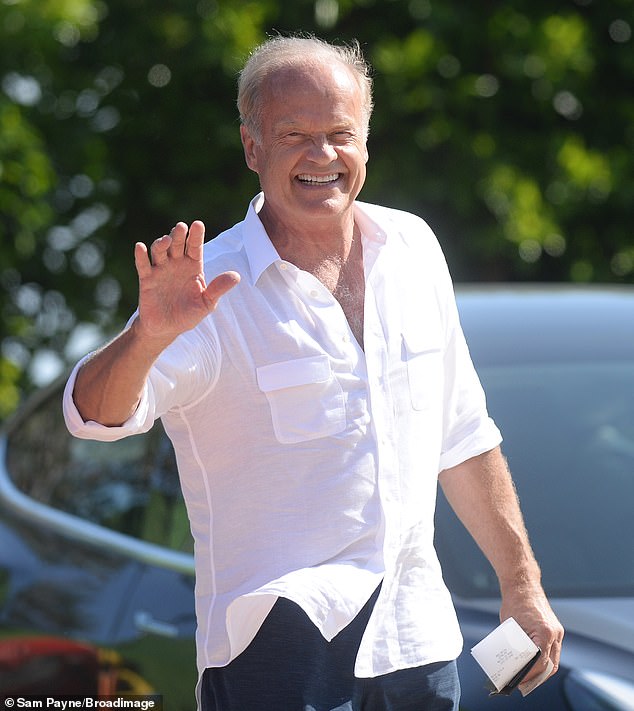 Cheers! Perhaps part of the reason for his smile was his upcoming Frasier reboot

The original show aired from 1993-2004, coming to a close after 11 seasons, having scooped a plethora of awards over its tenure for its writing and acting talent.

The sitcom co-starred John Mahoney as Frasier’s father Martin, who passed away aged 77 in 2018, following a four-year throat cancer battle.

Surviving stars Peri Gilpin, Jane Leeves and David Hyde Pierce are thought to be returning, but the new story won’t take place in Seattle, where it was originally set.

In 2019, Grammer gave the first glimpses of insight into what the premise of the new Frasier would be.

He told In Depth With Graham Bensinger: ‘We’ve got it hatched. We’ve hatched the plan, what we think is the right way to go. 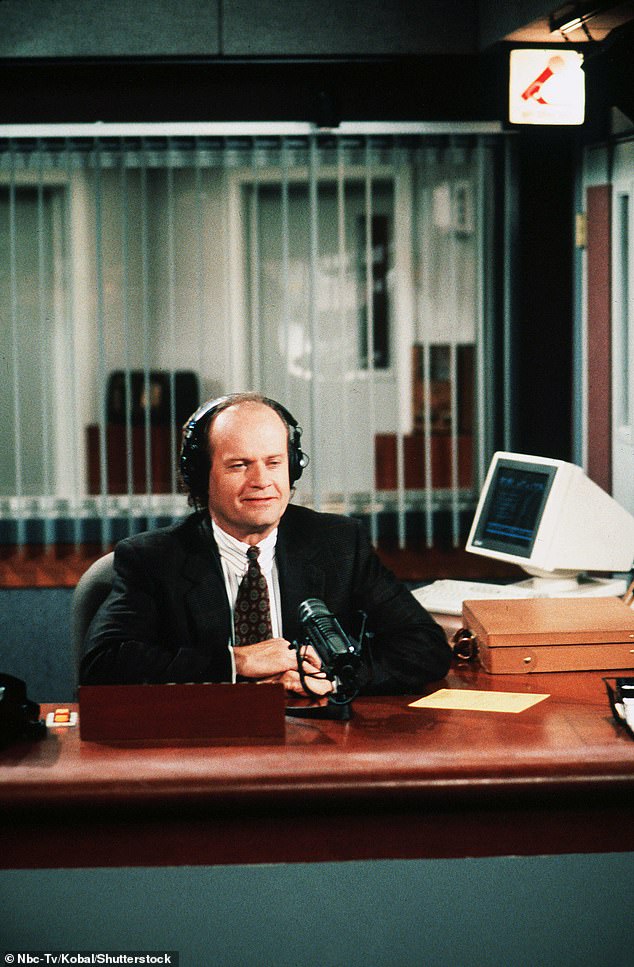 Back on air! The outing comes just days after it was confirmed Kelsey will reprise his role as Dr Frasier Crane as Paramount+ announced the beloved show will be part of its new lineup