Ken Livingstone’s ban from Labour could be lifted in a move set to reopen the party’s fierce internal row over alleged anti-Semitism.

The former London mayor was suspended for two years after making controversial claims that Hitler supported Zionism in the 1930s.

The ban is due to end on April 27 and it has been reported he will face no further action – unless further information emerges.

A source said Livingstone, as a full member, would be able to fully participate in the party again, according to the Observer.

Ken Livingston’s ban from the Labour Party could be lifted. The former London mayor was suspended for two years after making claims that Hitler supported Zionism in the 1930s (Pictured: Mr Livingstone in April 2016) 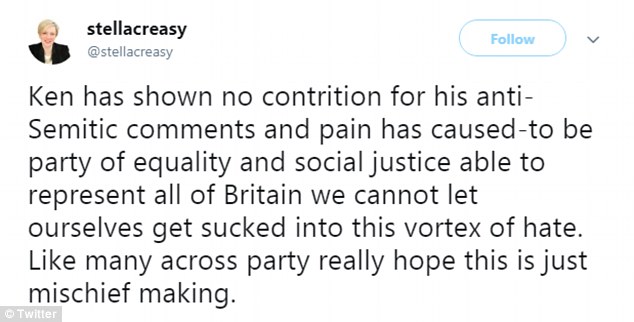 Labour MP Stella Creasy tweeted earlier today saying that Mr Livingstone has shown ‘no contrition’ for his anti-semitic comments, and said ‘we cannot let ourselves get sucked into this vortex of hate’

The move sparked criticism from the party’s own MPs.

On Saturday, Stella Creasy tweeted that Livingstone had shown no contrition for his comments.

She said: ‘Ken has shown no contrition for his anti-Semitic comments and pain has caused – to be party of equality and social justice able to represent all of Britain we cannot let ourselves get sucked into this vortex of hate.

‘Like many across party really hope this is just mischief making.’

And Wes Streeting, chair of the all-party parliamentary group for British Jews, told the Observer Livingstone’s return would cause ‘irreparable damage to the party’s standing and reputation’.

One senior Labour MP told the Observer: ‘All this shows that we have lost the party to the left. If Livingstone is allowed back, we could see resignations. It will be a tipping point for many people.’

Jess Phillips tweeted earlier today: ‘Nothing says socialism quite like “I’ll sue you if I don’t get my way” forgive me but what does he offer the party other than embarrassment and ego?’

Ruth Smeeth, who has suffered antisemitic abuse in the past on social media, said Livingstone ‘continues to bring the party into disrepute’ and ‘has no place in the party’. 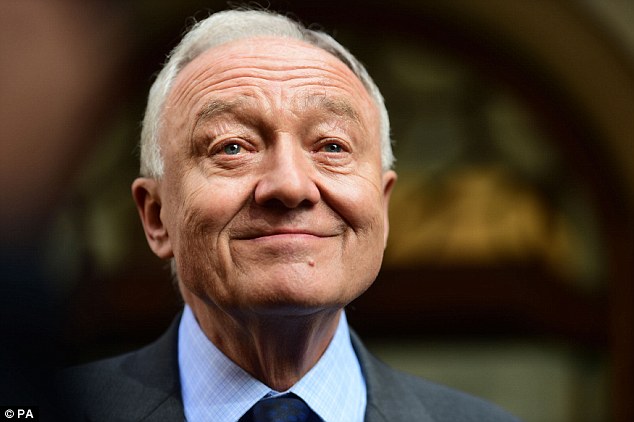 Mr Livingstone has said that he would take legal action against the party if he was not allowed to become a full member again, and said the entire controversy was ‘fake news’

Conservative MP James Cleverly also tweeted about Ken Livingstone rejoining Labour, saying: ‘You have got to be kidding me!’

Some Labour party members have already threatened to leave the party if Mr Livingstone is allowed to return.

Another individual said: ‘However Ken Livingstone acted when he was a member of #Labour, he has disgraced himself since his suspension. If he’s in, I’m out, and you should be too.’

Meanwhile, George Galloway, who said Mr Livingstone should not be suspended at the time of his Hitler comments, congratulated him on his return to the Labour party.

He tweeted: ‘Congratulations @ken4london on your return to the Labour Party from which you were so unjustly excluded @jeremycorbyn.’

Mr Livingstone told the Observer that he would take legal action against the party if he was not allowed to become a full member again, and said the entire controversy was ‘fake news’.

‘I did not say Hitler was a Zionist, and that was why I was suspended. That is just the problem of our fake news these days,’ he said.

‘What I referred was an agreement between German Zionists and the Nazi government in 1933 [the so-called Haavara agreement] and you can’t expel someone for stating historical fact when you have done nothing about those Labour MPs screaming that I was a Nazi apologist and all that garbage.’

He also claimed that Labour MPs had not turned against him because of anti-semitism, but because he supported Jeremy Corbyn.