Kendall Jenner gets her fast food fix at McDonald’s

She had all eyes on her on Monday night, as she graced the red carpet in at the London’s British Fashion Awards in a stunning golden sheer gown.

But Kendall Jenner soon ditched the glitz and glamour of her exclusive surroundings later in the night, when she was spotted getting her late-night fast food fix at a McDonald’s restaurant on the English capital’s famed Oxford Street.

The 23-year-old supermodel dressed down in jeans and a full-length black leather coat as she made a stop at the 24-hour eatery.

Fast food: Kendall Jenner was spotted at a McDonald’s restaurant in London on Monday night

Standing tall in a pair of two-tone heels, the younger sister of Kim Kardashian looked relaxed as she leaned against a counter while waiting for her order.

With an attentive bodyguard keeping a watchful eye over her, the California native laughed and chatted away with another casually-dressed female.

It was evident that staffers at the restaurant could barely contain their excitement as they took and dispatched the star’s order, as they were all seen sneaking a peek at her while pressing on with their work. 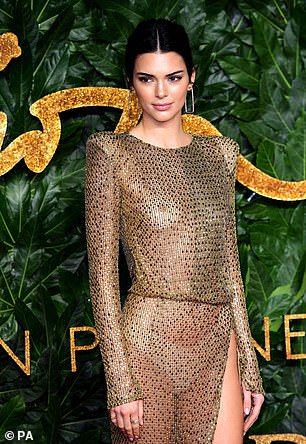 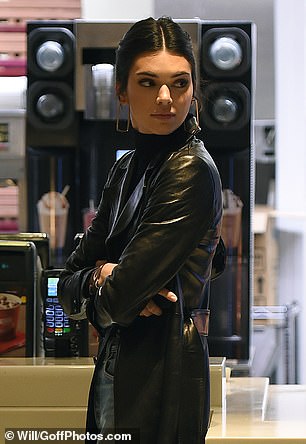 Stark contrast: Just a few hours earlier, she had all eyes on her as she attended the British fashion Awards in a decidedly daring gold sheer dress 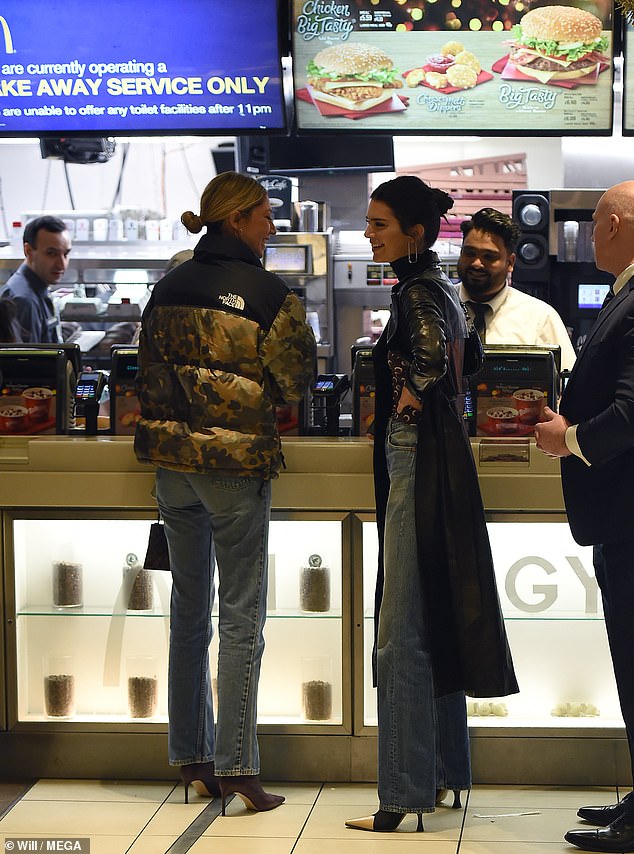 Casual: She dressed down for the outing, sporting faded jeans and a full-length leather coat 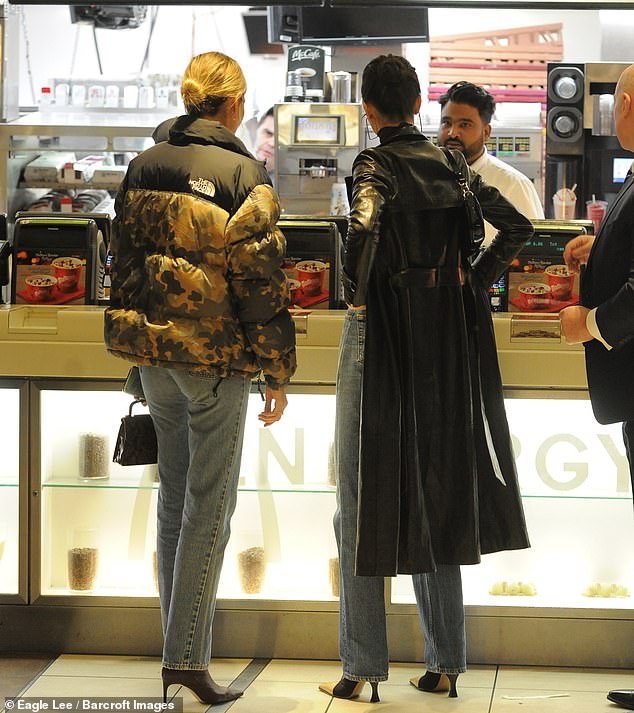 When hunger strikes: The Keeping Up With The Kardashians star was seen placing her order 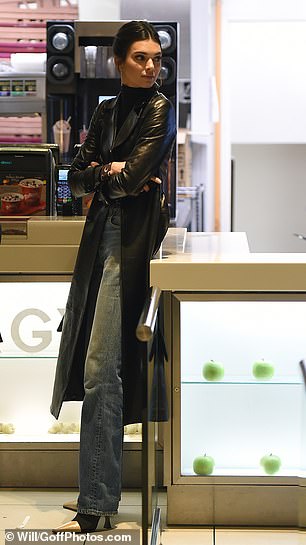 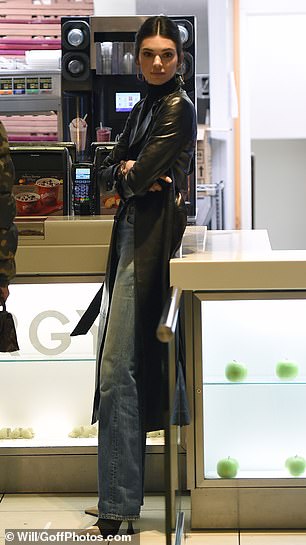 A whole new world? The supermodel leaned against a counter as she took in her surroundings 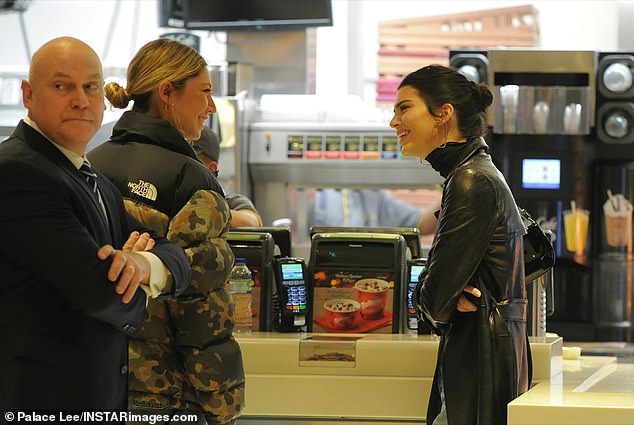 Chatting: As she waited for her order, she merrily chatted away with her casually dressed pal 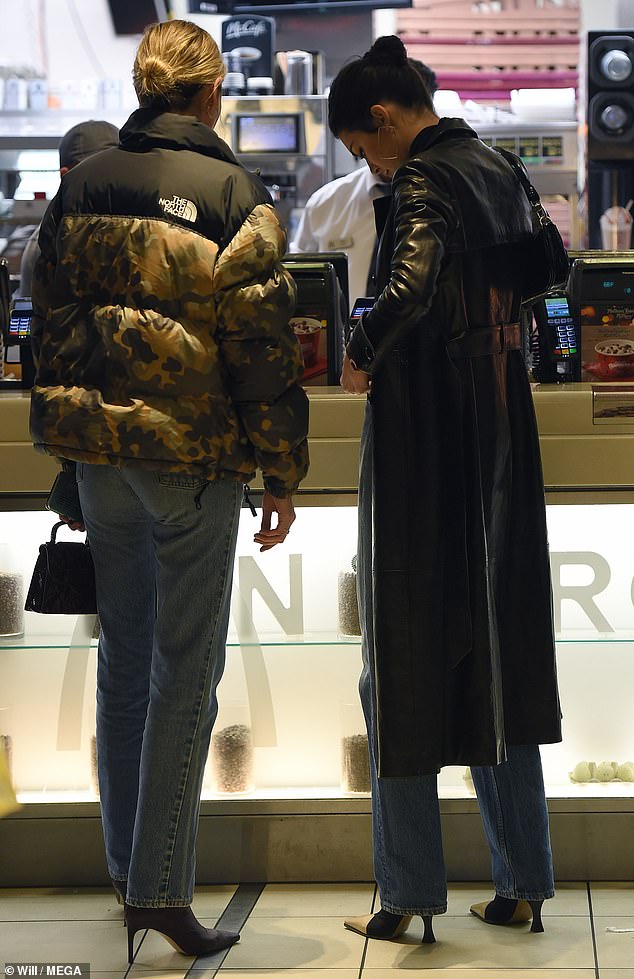 Minor adjustments: Staying on top of her appearance, she adjusted her clothing as she waited 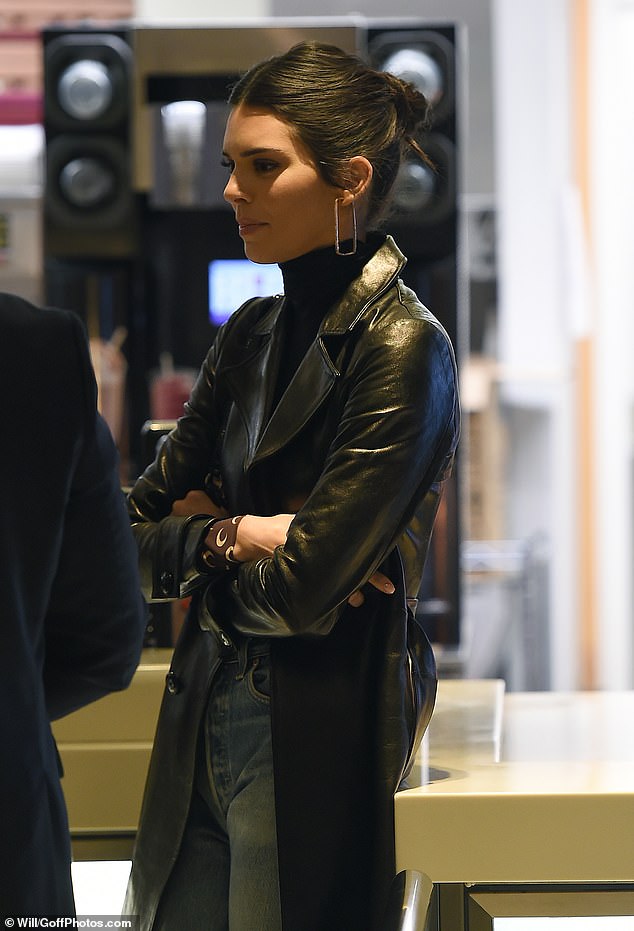 Stylish: The reality star and model remained stylish while taving off the cold, as she wore a rollneck top under her full-length coat

She had quite the busy night, as she was also seen stopping in at a private party in Belsize Park following the glittering awards gala.

Earlier in the evening, the American beauty  maintained her supermodel status when attending the star-studded Fashion Awards 2018 in Partnership with Swarovski in a sizzling sheer gold-beaded dress.

The Vogue coverstar looked sensational as she bared all and went bra-less under her glamorous gown, showcasing every inch of her bountiful cleavage as she arrived at the historic Royal Albert Hall in Kensington. 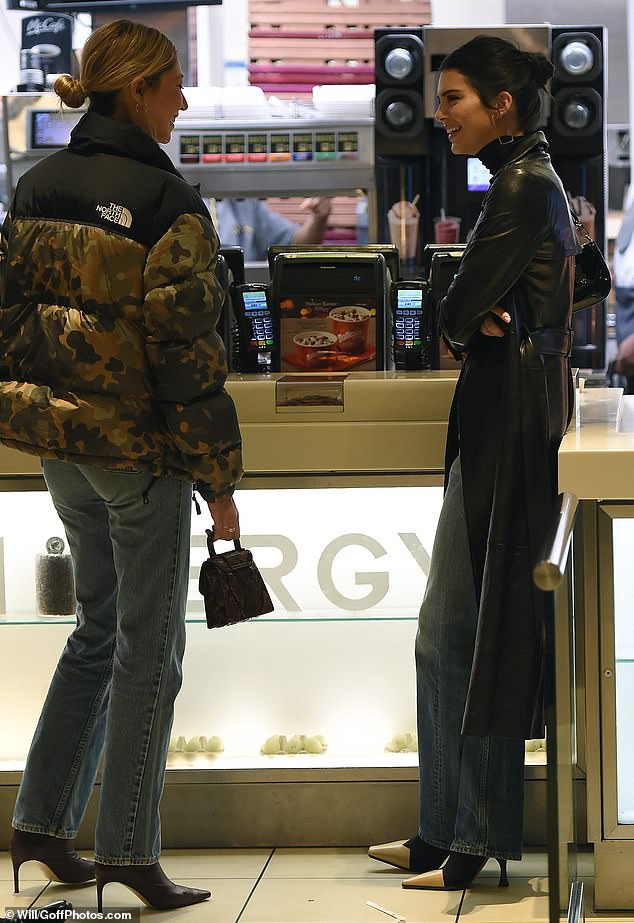 Tress-ed to impress: She wore her raven locks up in an elegant bun, a hairstyle she sported to the awards gala earlier in the evening 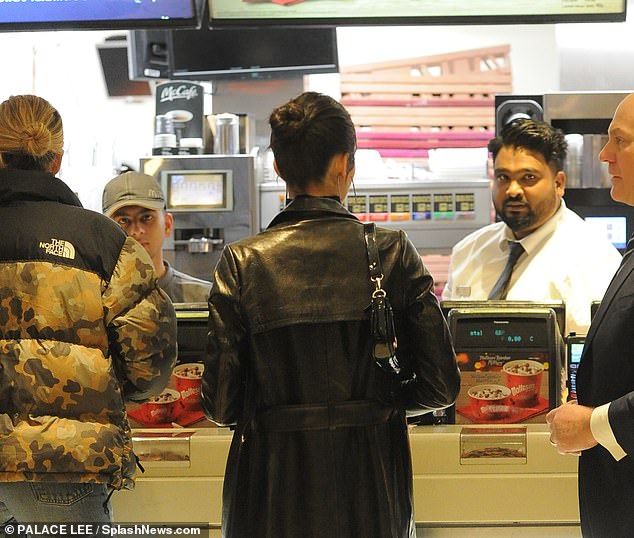 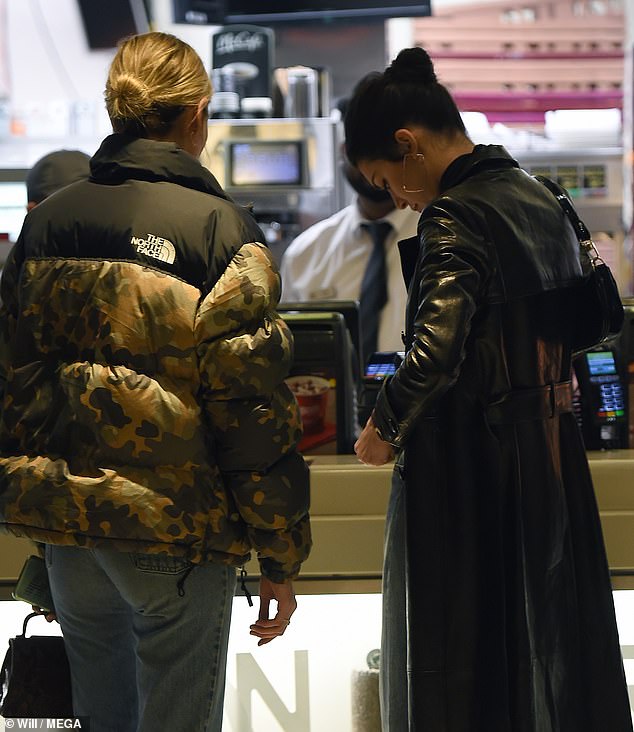 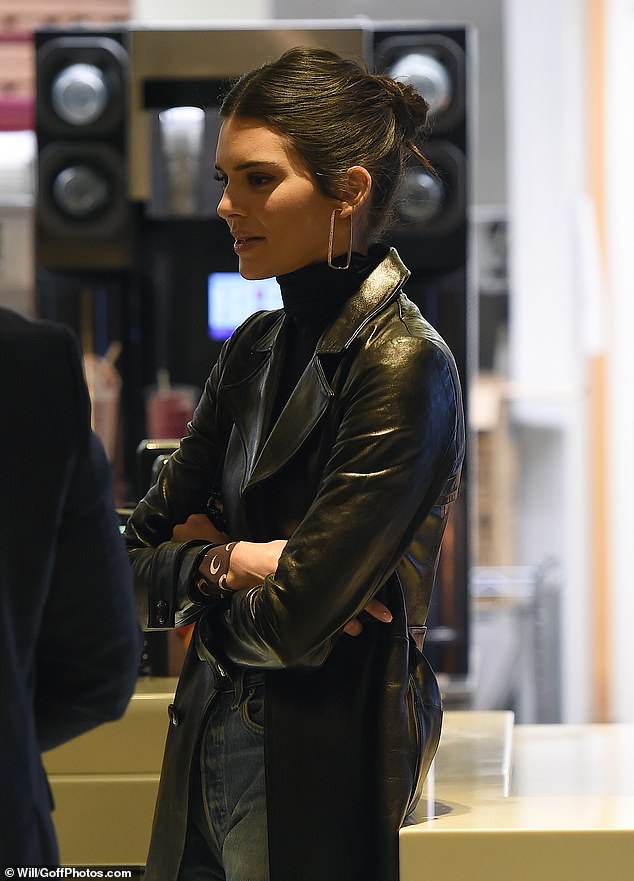 Jet-setter: Thanks to her work as a model, the star regularly jets around the world for shows 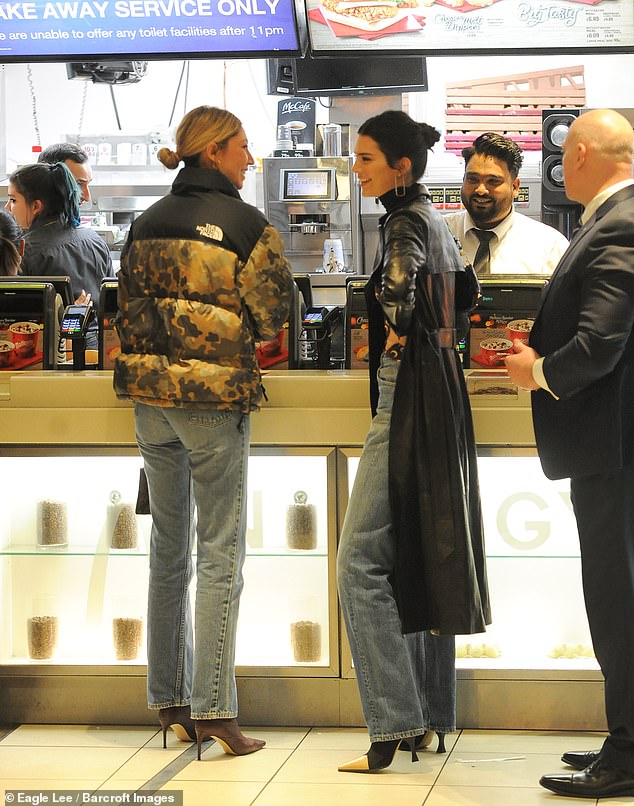 Jovial: The younger sister of Kim Kardashian appeared to be in a jovial mood on her night out 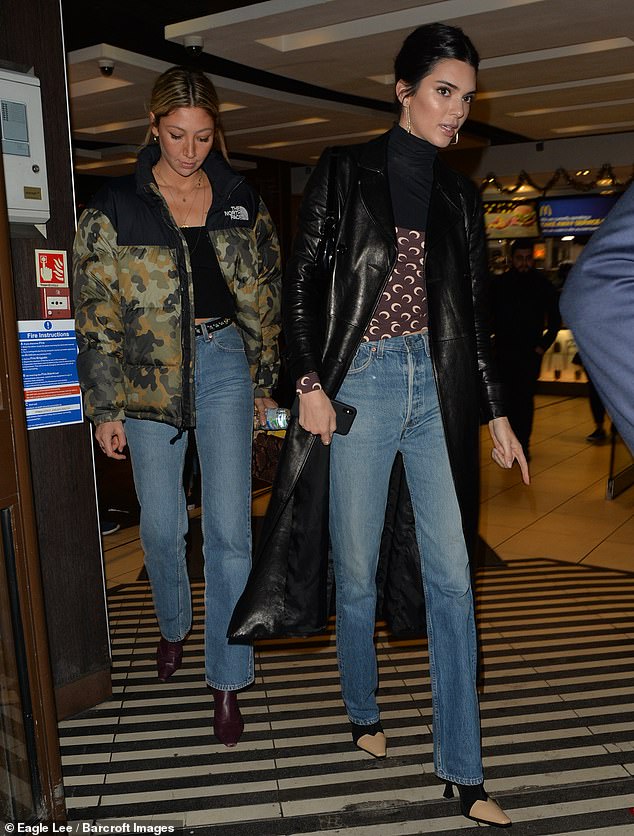 Mission accomplished: Kendall and her pal were later seen making their way out of the eatey 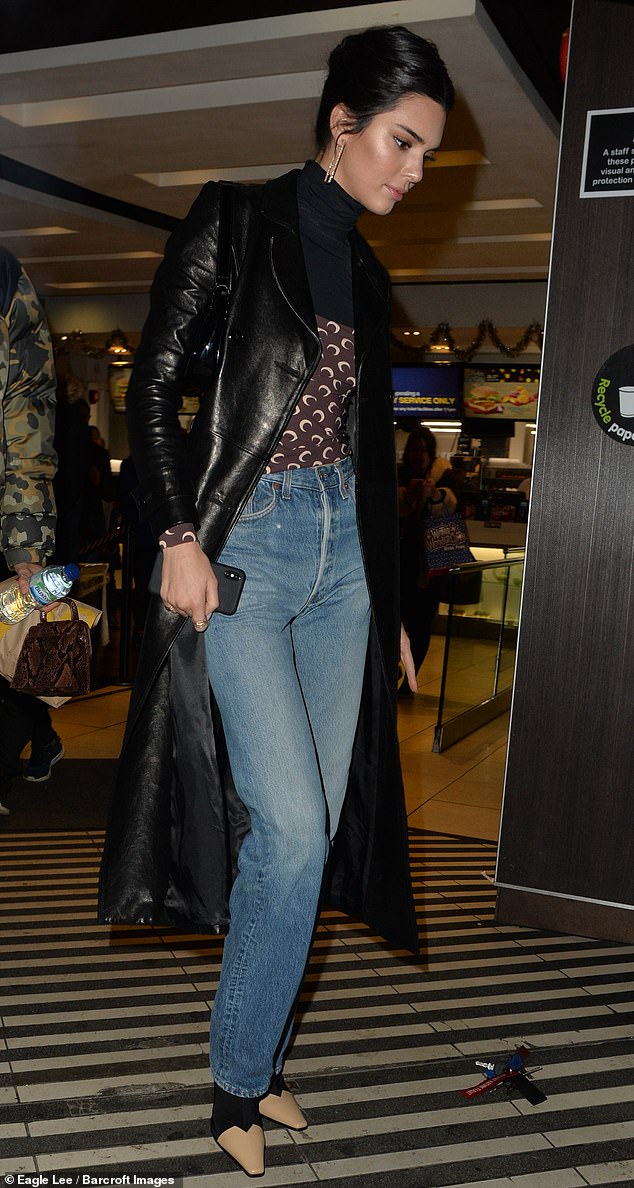 Bling: Her large angular earrings added an extra touch of glamour to her eye-catching look

The model left nothing to the imagination as she teamed the daring item of clothing with a pair of tiny nude thong knickers and barely-there perspex heels.

Letting the statement gown do all the talking, Kendall left her accessories minimal as she added just a simple pair of gold hooped earrings to complete her red-carpet look.

The Keeping Up with the Kardashians star styled her raven locks into a sleek swept back bun, and added a slick of glamorous make-up as worked her best angles.

Kendall was joined by the great and the good of the showbiz world at the fashion spectacle including Cindy Crawford, Yasmin Le Bon and Ellie Goulding.

Party: On the same night, she was seen making her way to a private party in Belsize Park 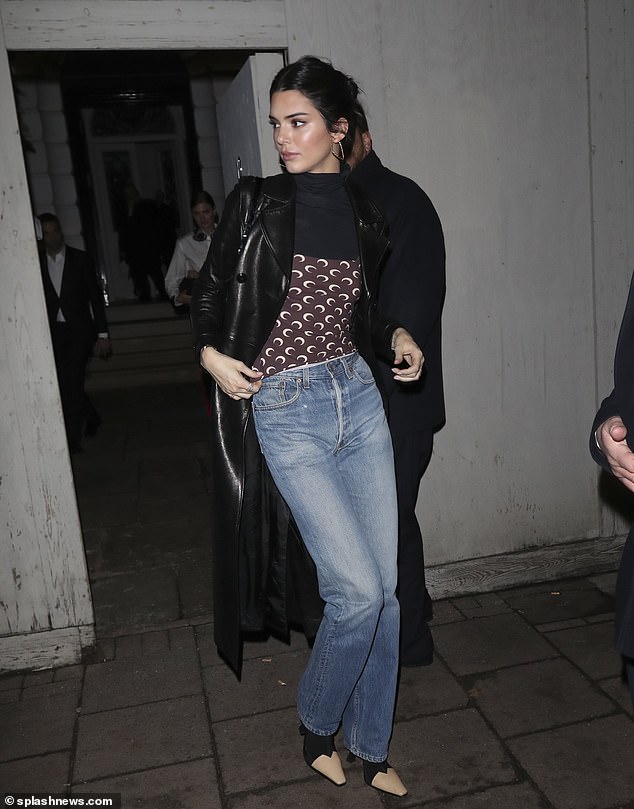 Effortless: She managed to appear effortlessly chic throughout her long night on the town

Celebrities: It is thought that she mingled with a host of celebrities at the exclusive after-party

In association with The British Fashion Council (BFC), The Fashion Awards celebrates individuals and businesses that have made a significant contribution to the fashion industry over the last year.

It is also a fundraiser for the BFC’s charities and aims to support future talented individuals with their creative fashion skills.

Her outing comes as it’s claimed she has rekindled her romance with NBA star Ben Simmons after previously dating from May until September.

‘They’re not exclusive and they’ll never be boyfriend and girlfriend, but they’re still having fun and hooking up,’ an insider told Us Weekly

‘Kendall likes hanging out with Ben – he’s funny and can relate to a lot of things that Kendall relates to.’ 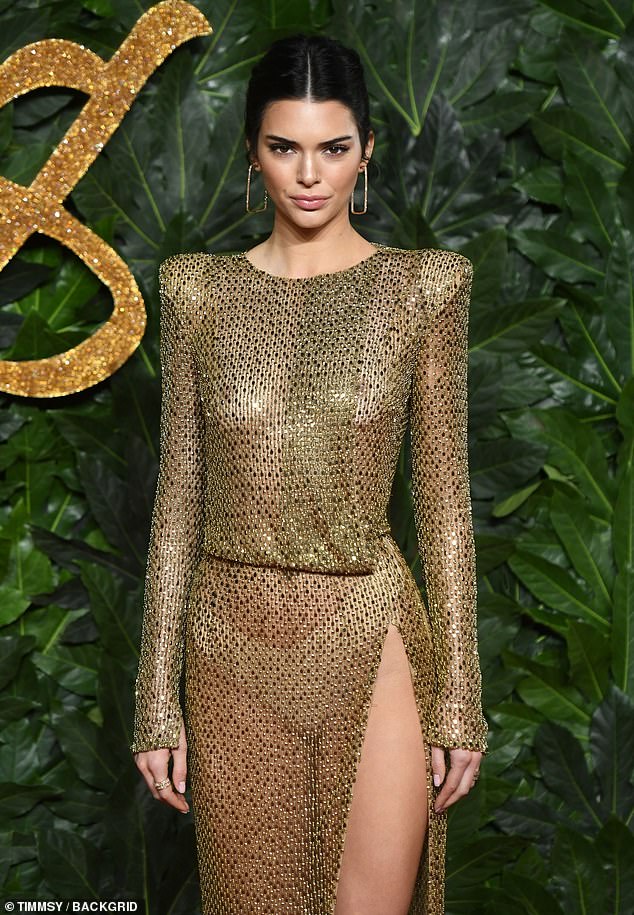 Daring: Earlier in the evening Kendall maintained her supermodel status when attending the Fashion Awards 2018 in Partnership with Swarovski in a sizzling sheer gold-beaded dress

Strike a pose: The Vogue coverstar, 23, looked sensational as she bared all and went bra-less under her glamorous gown as she arrived at the Royal Albert Hall in Kensington 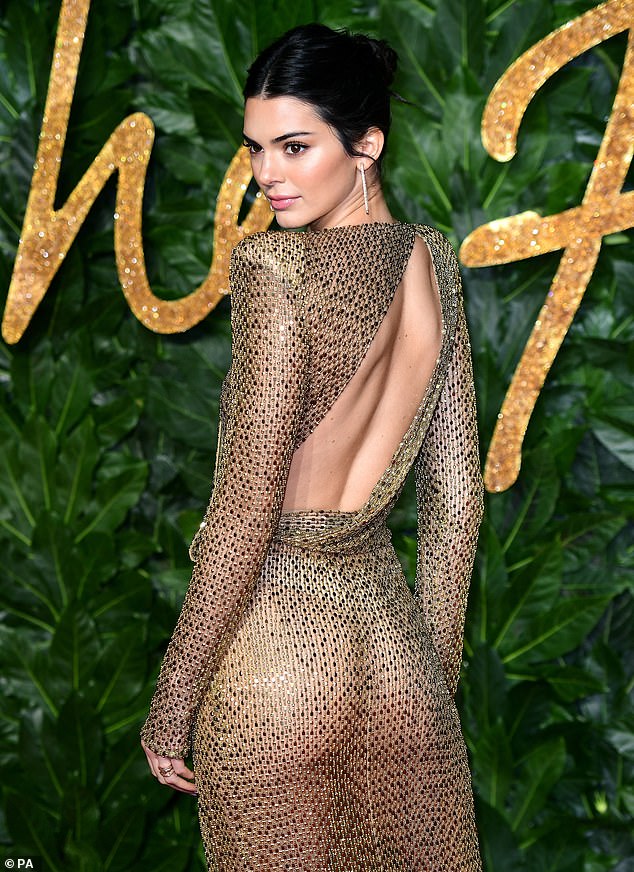 All in the details: Letting the statement gown do all the talking, Kendall left her accessories minimal as she added just a simple pair of gold hooped earrings to complete her look