Kendall Jenner is getting slammed by her fellow models after stating she is ‘super selective’ about the runway shows she walks in.

The 22-year-old model was photographed topless by Alasdair McLellan for Love magazine’s 10th anniversary issue, but its her comment about cherry-picking her fashion jobs that has many of her peers reeling.

‘Since the beginning we’ve been super selective about what shows I would do. I was never one of those girls who would do like 30 shows a season or whatever the f**k those girls do. More power to ’em,’ she said.

Hot water: Kendall Jenner is being slammed for saying she is ‘super selective’ about the runway shows she walks in 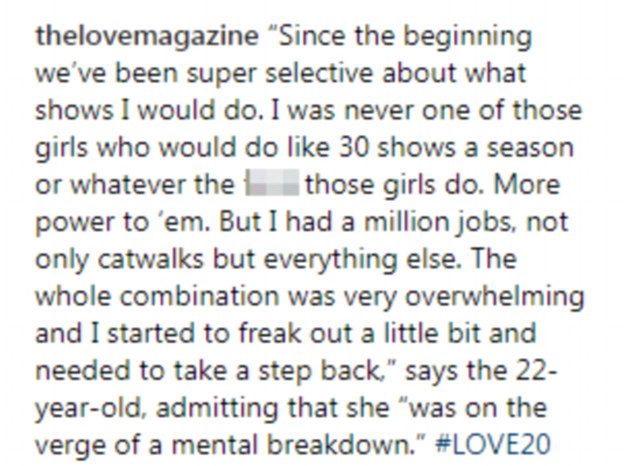 Cherry-picking: ‘I was never one of those girls who would do like 30 shows a season or whatever the f**k those girls do. More power to ’em,’ she told Love magazine

‘But I had a million jobs, not only catwalks but everything else. The whole combination was very overwhelming and I started to freak out a little bit and needed to take a step back,’ she added, admitting that she ‘was on the verge of a mental breakdown.’

The magazine shared a photo of Kendall along with the quote on its Instagram page on Friday, prompting plenty of comments from models who took offence to her remark.

‘This makes me so angry,’ Victoria’s Secret model Jac Jagaciak wrote. ‘So disrespectful to literally 99% of people in the industry — yes, they had to work their way up. Please get in touch with the real world!’

Sports Illustrated Swimsuit star Vita Sidorkina also hit back at Kendall, writing:’Maybe “those girls” need to pay their bills that’s why they are doing 30 shows? No words…’

Word to the wise: Jac asked Kendall to ‘get in touch with the real world’

Just a thought: Vita noted that ‘those girls’ likely had bills to pay

Other models opted to take screengrabs of Kendall’s quote and add their own commentary before sharing it on their Instagram Stories.

‘”… Whatever the f**k those girls do” is do their very best to make their way up AND try to make some money so that they can provide for themselves and their families,’ model Daria Strokous wrote.

While sharing Kendall’s photo and quote, Irina Djuranovic commented: ‘Never been so indirectly and publicly offended in my whole entire life god damn! To be called a supermodel… how easy it comes to you.’

‘I have no words,’ Amber Witcomb wrote across the photo, and Peyton Knight reposted her image using the hashtag ‘#ENDTHEPRIVILEGE.’ 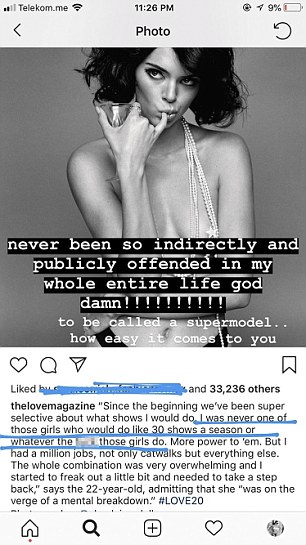 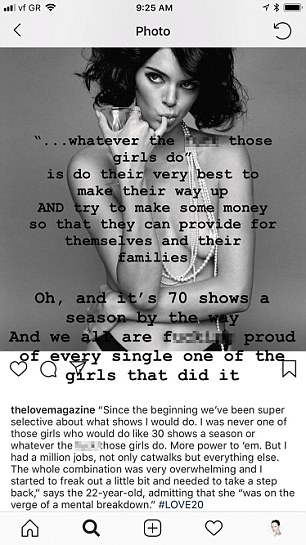 Comments: Irina wrote that she has ‘never been so indirectly and publicly offended,’ while Daria pointed out that most models walk in ’70 shows a season’ 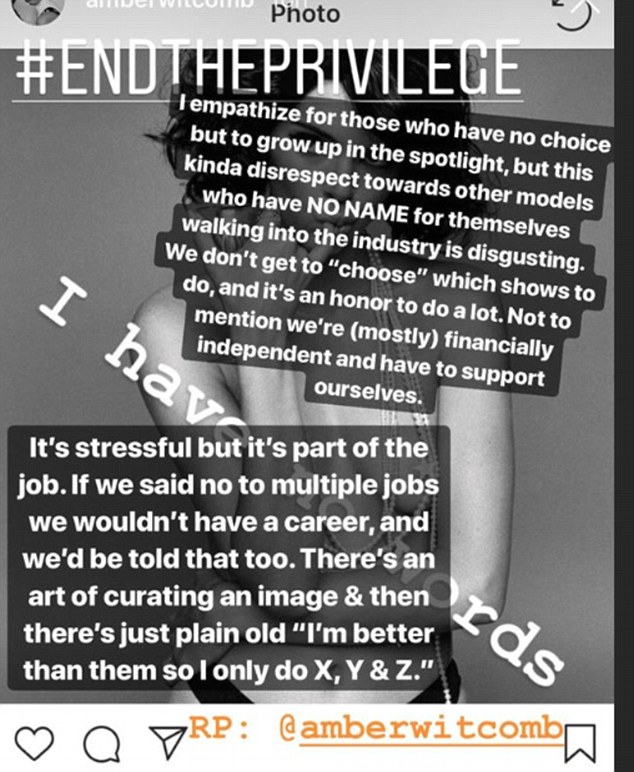 Taking offense: ‘I have no words,’ Amber Witcomb wrote across the photo, and Peyton Knight reposted the image and added the hashtag ‘#ENDTHEPRIVILEGE’ 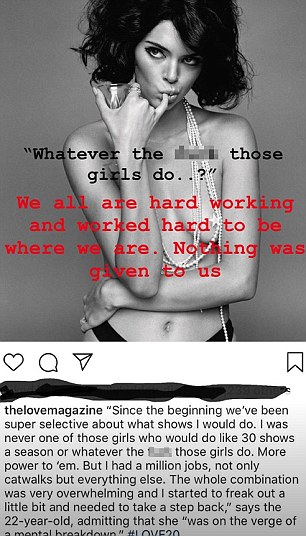 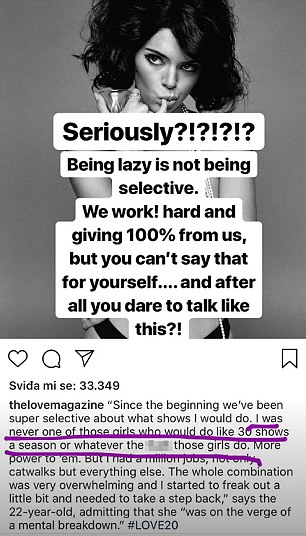 Working for it: In their responses, Ginta Lapiņa (left) and Faretta (right) pointed out how hard-working models are

‘This kinda disrespect towards other models who have NO NAME for themselves walking into the industry is disgusting,’ Peyton added. ‘We don’t get to “choose” which shows to do, and it’s an honor to do a lot. Not to mention we’re (mostly) financially independent and have to support ourselves.

‘It’s stressful but it’s part of the job. If we said no to multiple jobs we wouldn’t have a career, and we’d be told that too.’

Transgender model Teddy Quinlivan was among those who pointed out that most people in the industry don’t have the privilege of being able to pick and choose their own jobs.

In a lengthy post shared on her Instagram Stories, she wrote: ‘As models we need to uplift each other. We all work extremely hard to pursue our dreams even the “girls who walk 30 shows a season or whatever the f**k those girls do.”

‘If you are lucky as a model you might make enough to not be in debt to your agency; maybe even move out of the model apartment,’ she added. ‘Unfortunately this isn’t the case for the vast majority of models who have to leave everything behind including their families in pursuit of a better life. 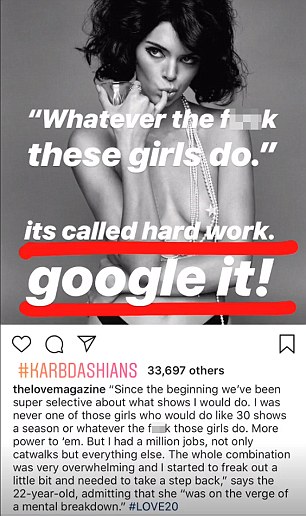 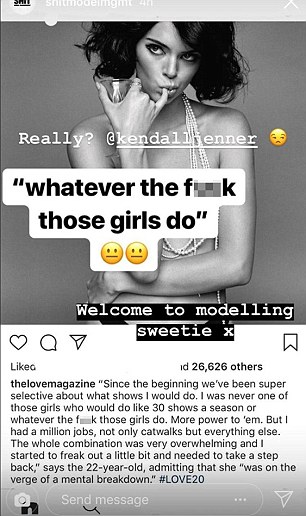 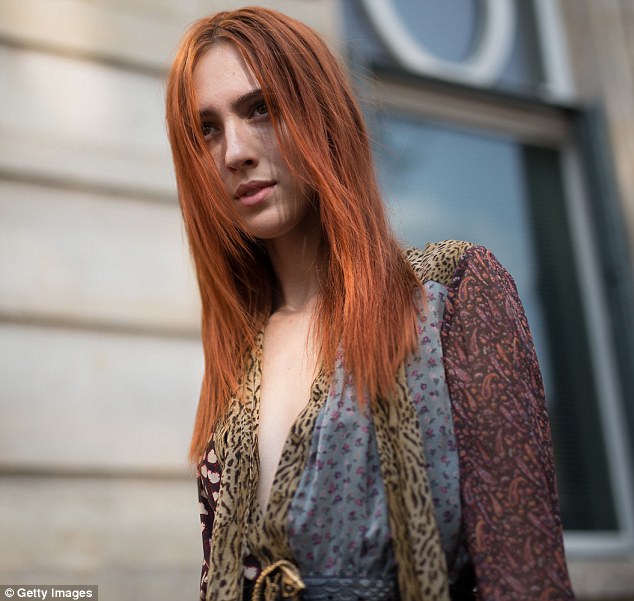 Facts: Transgender model Teddy Quinlivan was among those who pointed out that most people in the industry don’t have the privilege of being able to pick and choose their own jobs 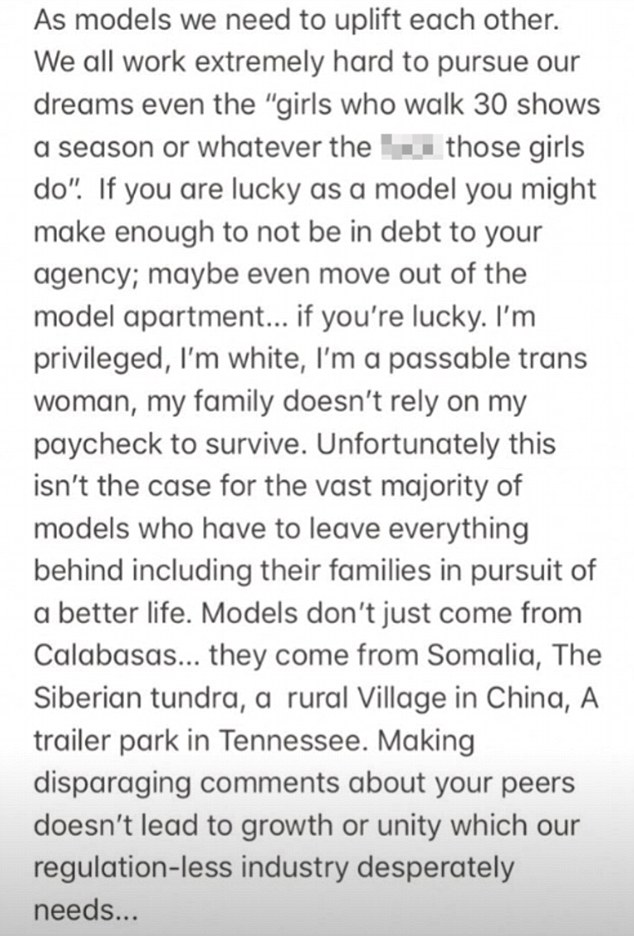 Sharing her thoughts: ‘As models we need to life each other up,’ Teddy wrote 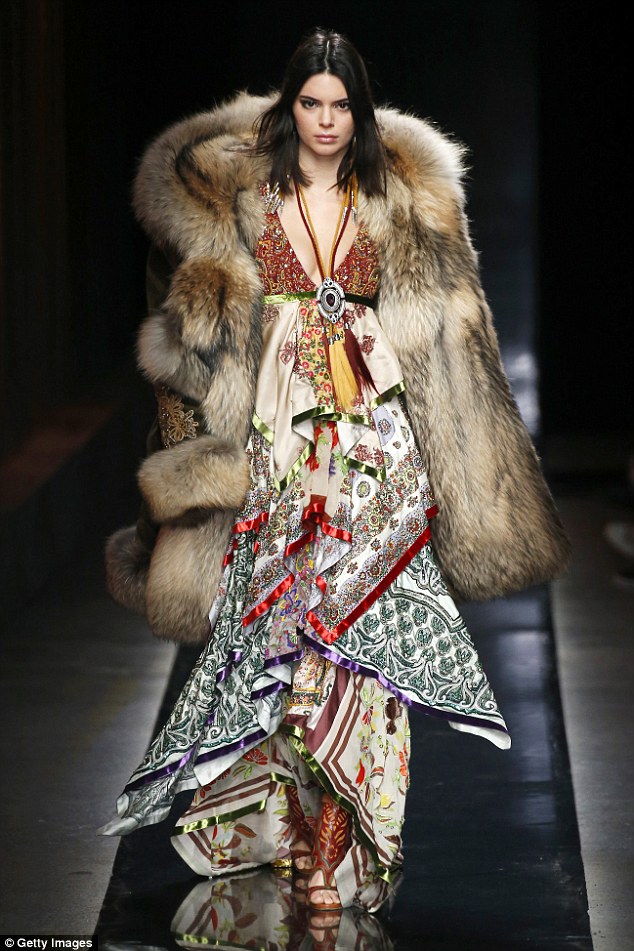 Response: Kendall’s rep told Daily Mail Online that the quote was taken out of context, saying: ‘The point was that it’s their path and “the more power to them.”‘

‘Models don’t just come from Calabasas… they come from Somalia, the Siberian tundra, a rural village in China, a trailer park in Tennessee. Making disparaging comments about your peers doesn’t lead to growth or unity which our regulation-less industry desperately needs.’

Kendall’s rep told Daily Mail Online that her quote was taken out of context.

‘She realized the number of shows some models walk a season is closer to 80,’ the rep explained. ‘The point was that it’s their path and “the more power to them.” She admires their hard work and dedication. It’s an accomplishment.’

Earlier this year, Kendall skipped fashion month all together, and she opened up about her decision to do so in March.

‘I made it a point at the beginning of 2017 to consciously slow down, take more time for myself, be more selective and not just do whatever my agents tell me to do,’ she told Vogue for the magazine’s April 2018 cover story.

Kendall, who has been candid about her struggles with anxiety, went on to say that she has been practicing transcendental mediation.

‘I had a lot of people in the industry say to me, “I know you have a busy schedule —what do you do to stay calm, cool, and collected?” I was like, “Um, nothing?” And then one day, when I was having a freak-out — I was having multiple freak-outs — I was like, OK, I’m going to try this,’ she expkained. ‘So I found this lady, she’s awesome, she taught me TM [transcendental meditation], and I love it.’