Kennel boss lied to owner about putting her dog in freezer

A kennel boss who won a prestigious Crufts award lied to a dog owner about putting her Jackahuahua in the freezer after it was killed by a greyhound, a court heard.

Paul Sparks, 61, was looking after the two-year-old Chihuahua and Jack Russell cross Archie when it was mauled to death by another dog.

He told Debbie Wibberley that the dog’s body was at a vets, then that her pet had been cremated before he finally confessed that his body was in his deep freeze.

Heartless Sparks, from Combe Raleigh, Devon, told the distraught owner: ‘I know a dead dog when I see one.’

Exeter Magistrates’ Court heard that as a result of the incident Sparks has received five death threats.

The court was told the greyhound snapped Archie’s spine and Sparks admitted a charge under the Animal Welfare Act and four breaches of his licence.

Magistrates said it was ‘reprehensible’ that Sparks did not immediately call the dog’s owner and ‘almost inexplicable’ he failed to contact a vet.

They said Sparks may have been ‘nonplussed and scared’ by the incident but they added Archie’s death could have been ‘undoubtedly prevented’.

He was not banned from keeping animals or running his kennels and was instead fined a total of £4,135 with costs.

In 2013, Sparks was awarded Crufts co-breeder of the year award. 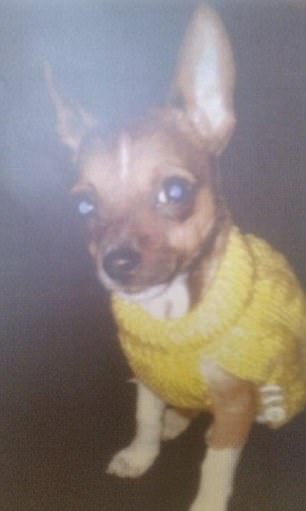 Prosecutor Gavin Collett, for East Devon Council, said Archie died within a short time of being placed at the Barn Close kennels in Combe Raleigh by his owner who was going on a weekend break last October.

Mr Collett said Archie managed to escape into a secure corridor, but doors had been left open and he managed to get into an exercise yard – where a greyhound attacked him and Archie ‘met his untimely demise’.

He said Sparks failed to contact the owners, a vet or the council as licensing authority.

When the owner returned from holiday she was told about Archie’s death and was ‘very upset’.

She wanted to bury him and Sparks eventually told her his body was in his freezer.

Barrister David Campbell, defending, said the police were investigating the death threats made against Sparks.

He said the pet’s death was a ‘tragic incident’ but Sparks blamed a former member of staff saying they may have let the dog get through an open door.

Mr Campbell said Sparks had put and his ‘life and soul’ into his kennels which can house 110 dogs and 24 cats adding it was a ‘way of life running kennels’.