It has been a busy year for the Royal family jam packed with events including the birth of Prince Louis, two weddings and an overseas tour.

And as 2018 comes to an end Kensington Palace has released a video showing their ‘favourite moments’ from the last 12 months.

However it is Meghan Markle who steals the show and is seen the most in the video, raking in over 30 appearances in the three-minute clip.

The clip starts in January showing a pregnant Kate Middleton sitting with school children in their classroom and Meghan Markle and Prince Harry visiting Cardiff.

Shots of the Cambridge’s at the Bafta’s in February are also included in the roundup as well as multiple moments the royals met members of the public.

The first time the Fab Four are seen together in the Palace’s video is 35 seconds in when they are shown during a royal foundation event in February.

Meghan is seen around 31 times in total throughout the clip while Kate is clocked 23 times, including their five joint appearances.

In April Prince William and Kate are shown on the steps of the Lido Wing cradling new baby Prince Louis before two clips of Harry and Meghan’s wedding are shown in May.

Meghan features heavily in the final half of the video, perhaps because her sister-in-law Kate was on maternity leave after giving birth to her third child. 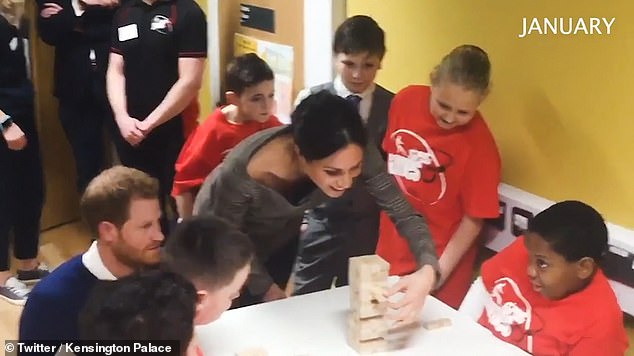 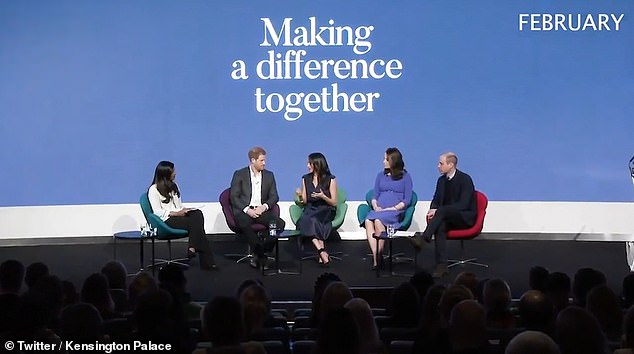 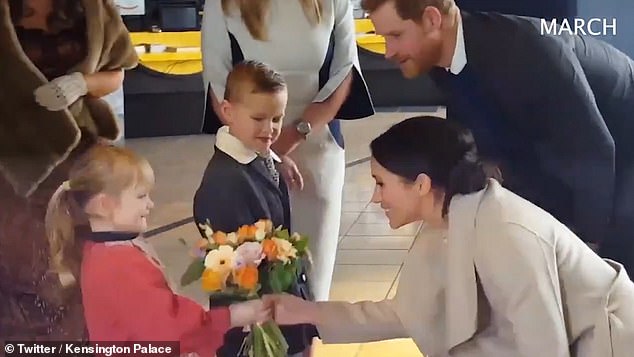 Meghan receives flowers from a little girl in March, two months before her wedding in Windsor 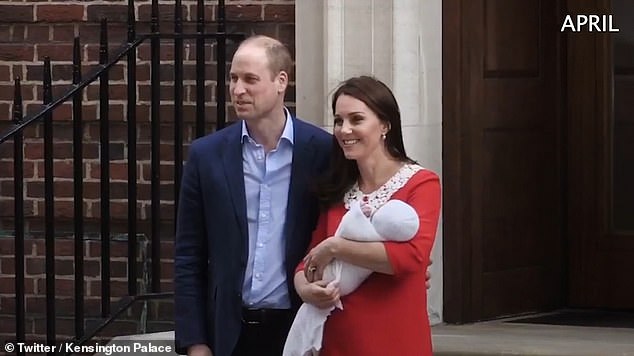 The Duchess of Sussex is also seen giggling with the Queen, dressed in bold green, in one heartwarming clip.

Kate is seen interacting with and helping children on official events again in clips from September.

However October’s clips were mostly from the royal tour of Australia, New Zealand, Fiji and Tonga.

The video, which only features five moments of the two couples being together, comes amid questions of there being a rift between Meghan and Kate.

However they were all smiles as they joined the Queen at church in Sandringham on Christmas Day earlier this week. 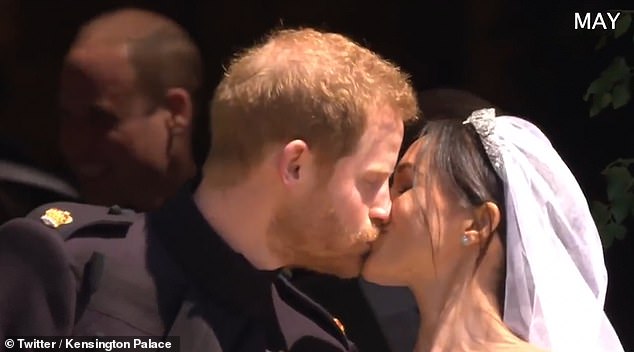 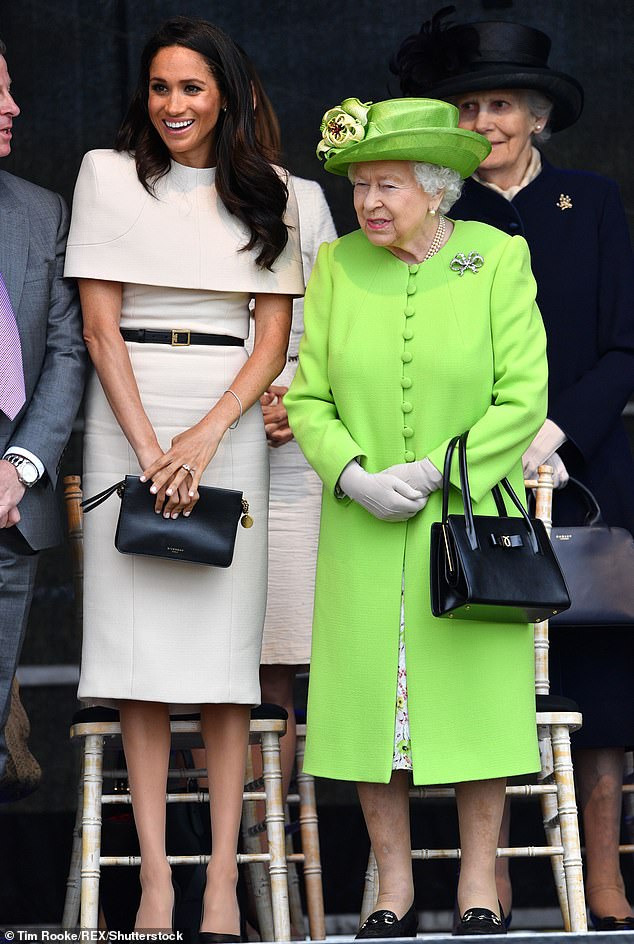 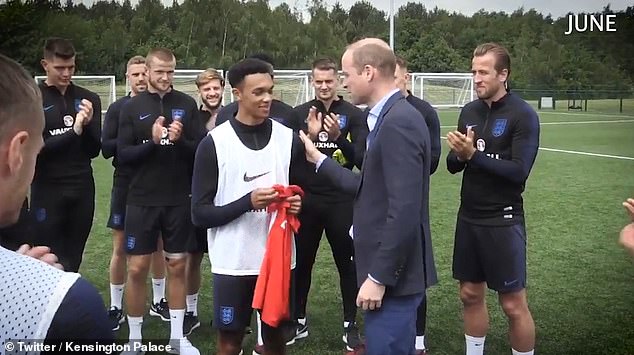 Thousands of people have commented on the video saying it was great to look back on what a busy and successful year 2018 was.

One person wrote: ‘What an epic year for all four. Keep up the good work.’

Another added: ‘What a great royal year it was! Can’t wait for what 2019 will bring, especially #babysussex’

Despite numerous appearances it was Princess Anne, 68, who was crowned the hardest working this year after carrying out engagements on more than 180 days 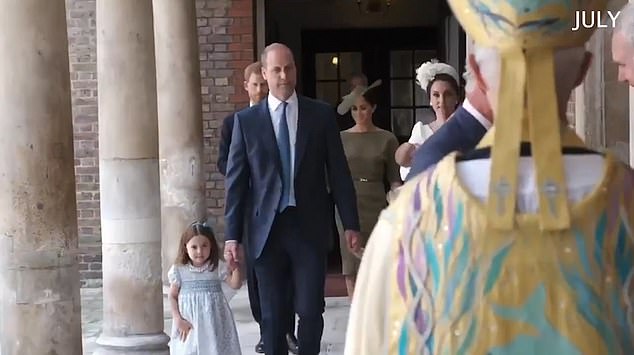 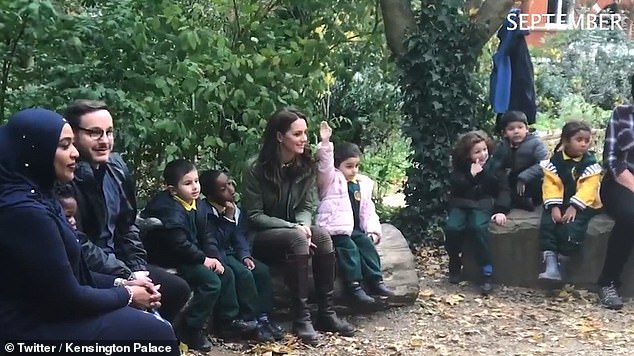 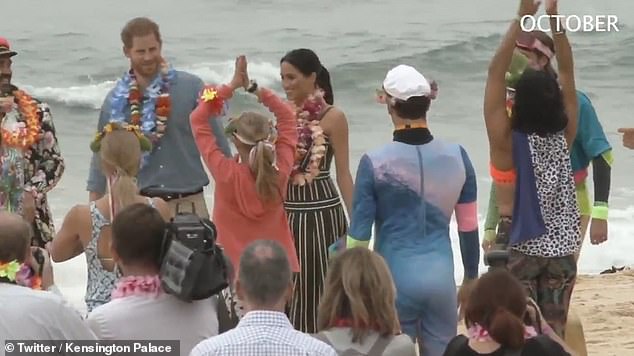 October’s clips were mostly from the royal tour of Australia, New Zealand, Fiji and Tonga

The Duchess of Sussex, who only joined the court circular after her nuptials in May, carried out just under 50 days of engagements in those seven months.

Kate, who was on maternity leave for much of the year after giving birth to Prince Louis in April, carried out a similar number, working more than 50 days in 2018.

Princess Anne has been named the hardest working royal each year since 2015.

The younger royals instead have chosen to focus on fewer projects that they are more involved in, including their Heads Together mental health initiative. 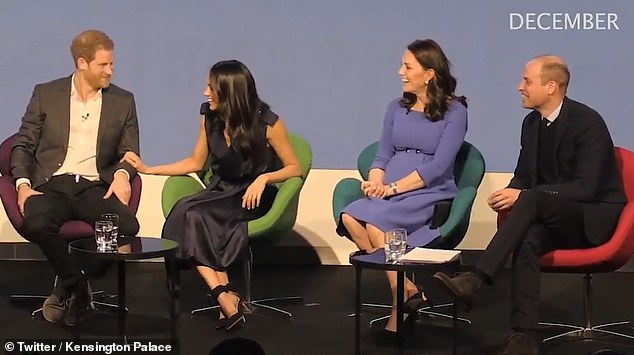 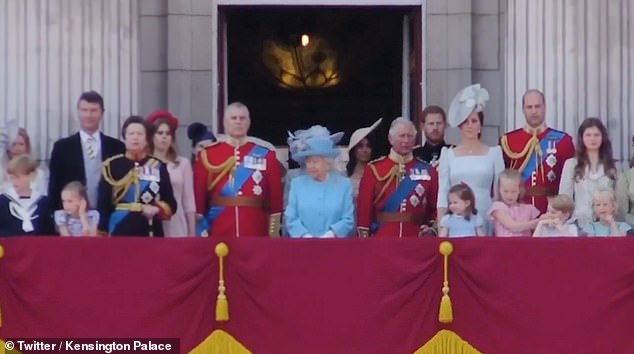 After the roundup the Kensington Palace’s video ended with the words: ‘Thank you to everyone who made this year so special. See you in 2019!’