She showcased her jaw-dropping transformation on Instagram earlier this week, revealing she had lost a further two stones since the summer.

While eating right and working out have helped her weightloss, Kerry Katona, 37, has revealed that getting protein injections into her stomach have aided her fitness metamorphosis.

The former Atomic Kitten singer credited her transformation to the Real Housewives of Cheshire star Ampika Pickston – who she has been living with since October – after she signed up to her pal’s £250-a-month weight loss plan, Skinny Revolution.

Secret’s out: Kerry Katona, 37, has revealed that getting protein injections into her stomach have aided her fitness metamorphosis

According to Closer magazine, the TV personality reportedly lost the weight in six weeks after beginning the slimming plan and moving in with her pal while she appears in Panto in Manchester.

An insider told the publication: ‘Kerry’s lost a lot of weight since moving in with Ampika. She’s now just over 8st and a size 6 and hasn’t even been exercising.

‘She’s just been juicing and doing the Skinny Revolution plan.’

Aside from the healthy meal plan, Ampika’s Skinny Revolution regime includes daily injections of a protein-based hormone which acts as an appetite suppressant – with those undertaking the regime advised to have the dose for two to three weeks. 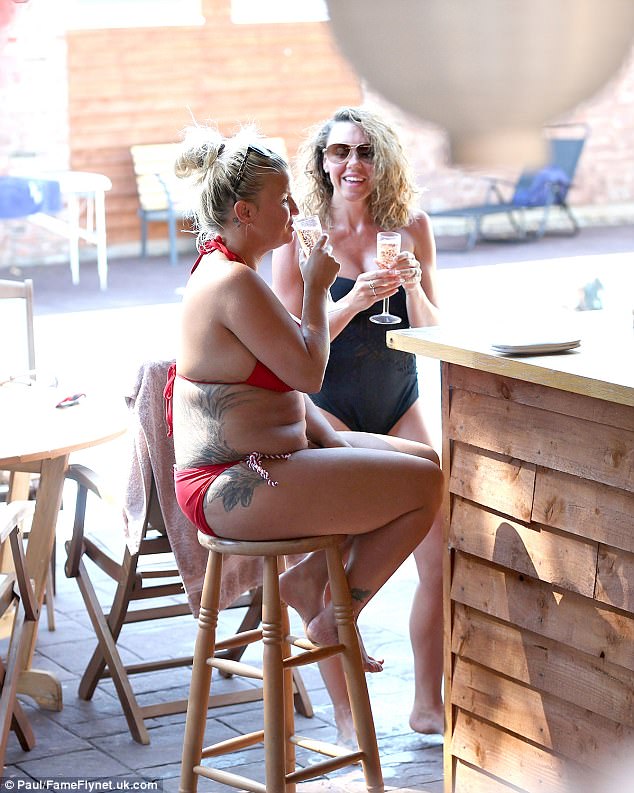 What a difference: Kerry sported a fuller figure in previous years but has focused on her fitness since June 2017 after ‘cutting out’ alcohol and taking up hiking (Pictured with pal Michelle Heaton in 20016)

Previously Ampika hit back at sceptics on her Skinny Revolution Facebook page, insisting that her fitness plans in its entirety works.

The post read: ‘People keep saying, does this injection work? For you all sceptics at home, keep watching this space. I’m going to keep showing you people every that are losing weight on this appetite suppressant.’

Thrilled by her own progress, Kerry proudly revealed she has shed a further two stone, flaunting her incredible abs in a skimpy crop top for a selfie on Wednesday. 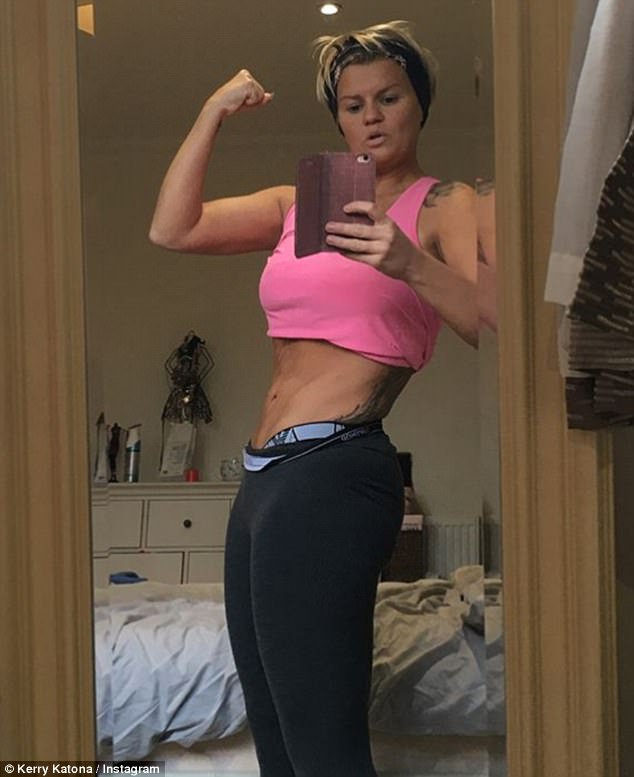 Impressive: Kerry Katona, 37, proudly revealed she had shed a further two stone, flaunting her incredible abs in a skimpy crop top for a selfie on Wednesday

Sharing a series of snaps of her toned physique on Instagram, she gushed: ‘Woohoo I’ve lost over 2 stone, feeling on top of the world!

Kerry moved in with her ‘wifey’ beauty salon owner Ampika after splitting from third husband George Kay in June, and began her fitness journey with her in November.

Her fans flocked to praise her in the comments section, with one writing: ‘You look fantastic well done!’ while another added: ‘Amazing Kerry such an inspiration!’ 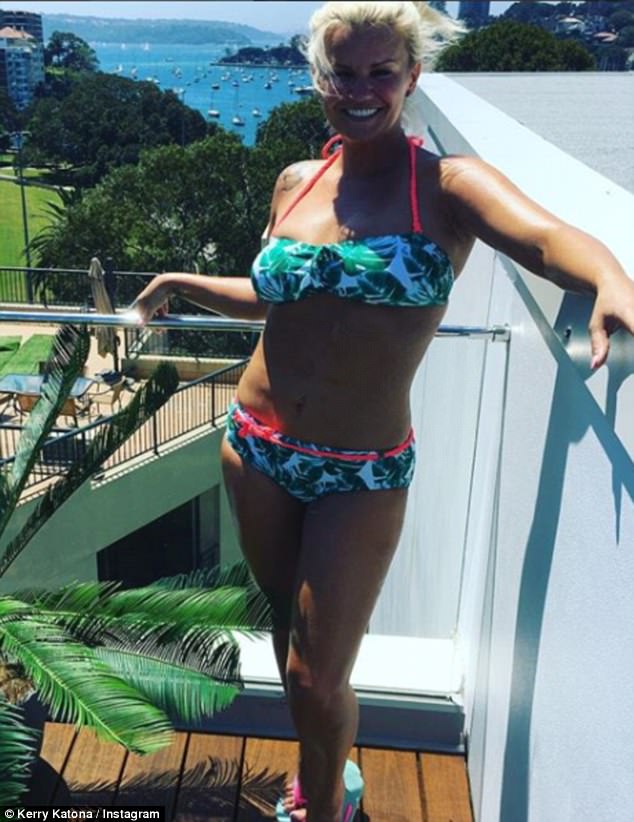 Fitness journey: She had already dropped three stone over the summer after she took up hiking and yoga and ‘practically cut out’ alcohol (pictured last February) 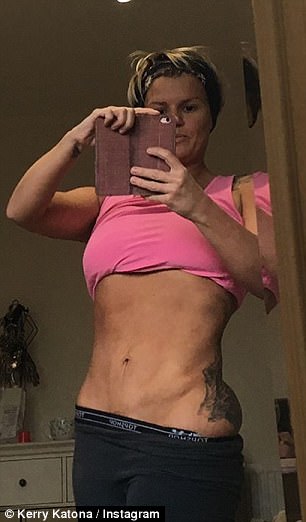 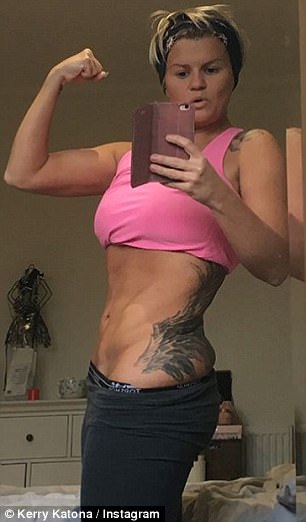 Loving life: Sharing a series of snaps of her toned physique on Instagram, she gushed: ‘Woohoo I’ve lost over 2 stone, feeling on top of the world’

A third penned: ‘You look absolutely incredible I need what you have been doing and your mojo babe. Hope you had an amazing Christmas and new year beautiful.’

Last year, Kerry confessed to having a ‘s**t load’ of liposuction and mini tummy tuck in a bid to kick start her waistline.

And after relying on her own perseverance to whittle her figure down further, Kerry spoke candidly to OK! magazine about the routine it took to maintain her efforts. 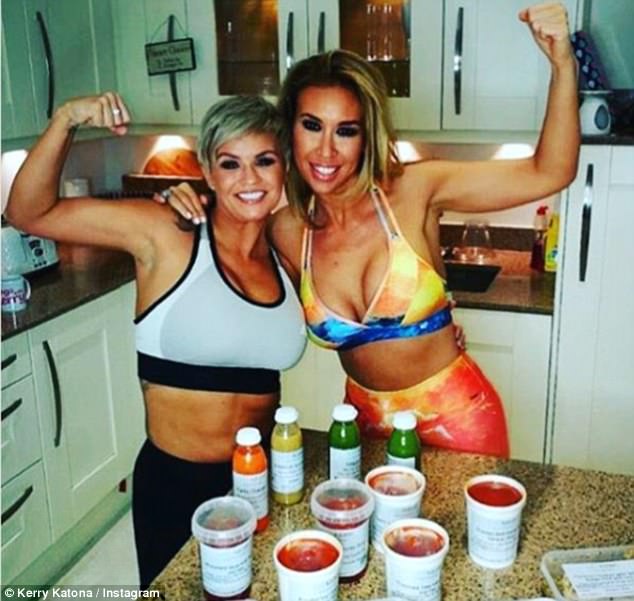 Her gym buddy: Kerry moved in with her ‘wifey’ beauty salon owner Ampika (pictured) after splitting from third husband George Kay in June, and began her fitness journey with her in November

‘George (Kerry’s then husband) is training me so, after the kids have gone to school, we do a circuit in the kitchen. I’ve been going hiking in the hills close to where I live too, so that’s all good for me.’

One major factor that has helped her drop the pounds is cutting down on alcohol – and she expressed how incredible the change has made her.

Kerry has been throwing herself into her fitness after splitting from husband George Kay for the second time in June after three years of marriage. They share one daughter, Dylan-Jorge, three.

Image overhaul: In 2016, Kerry confessed to having a ‘s**t load’ of liposuction and mini tummy tuck in a bid to kick start her waistline (left, in August 2017 and right, in April 2016)

It has been claimed that George has demanded a £20,000 a month divorce settlement which will equal £1million over four years, The Mirror Online reported.

It was alleged that George, 37, has told friends he will ask for Kerry to fund his lifestyle, in payments he reportedly wants to start as soon as possible.

Earlier in 2017, the former flames were going to make an appearance on Channel 5’s Celebrity Big Brother but they had to pull out because of ‘domestic issues’.

Kerry previously split with George in October 2015 after thirteen months together, a month later she appeared in court where she accused him of beating her up at their home after he allegedly armed himself with a Taser-style device and a knife.

George was later acquitted after prosecutors didn’t have enough evidence to secure a conviction. 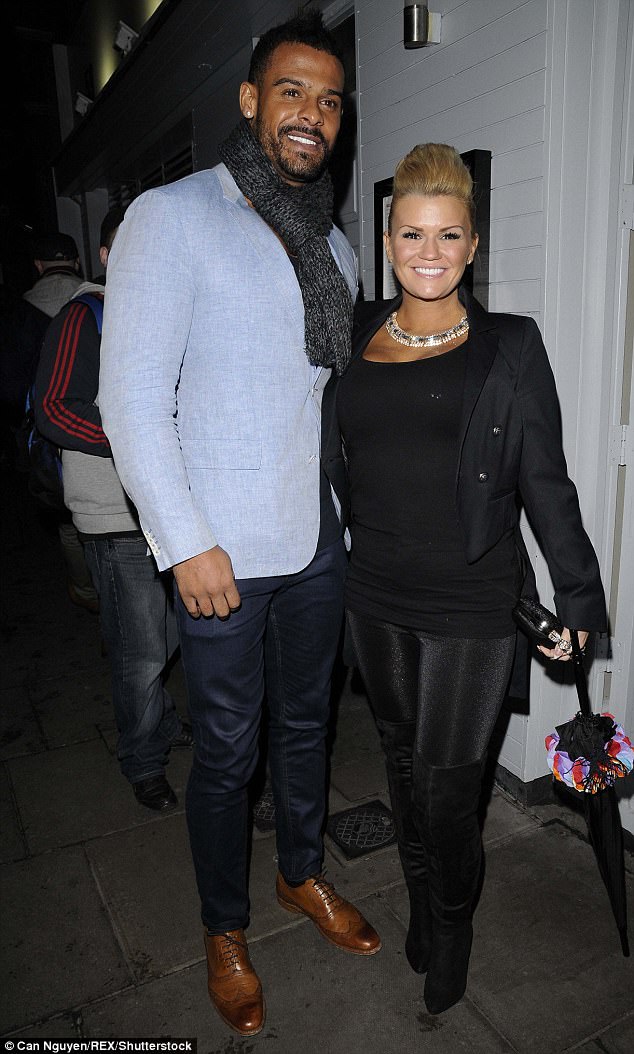 Claim: It has been claimed Kerry’s estranged husband George Kay has demanded a £20,000 a month divorce settlement which will equal £1m over four years, reports The Mirror Online