Kerry Katona has revealed that she’s starting to go bald after using hair extensions for many years.

The former Atomic Kitten singer, 40, shared snaps to Instagram on Tuesday showing a hairless patch at the front of her head.

Although now having ‘fine and wispy’ hair, Kerry excitedly added that she’s found some ‘amazing’ new clip in extensions that won’t do any more damage to her locks.

Hair loss: Kerry Katona has revealed that she’s starting to go bald after using hair extensions for many years which has left her locks ‘fine and wispy’

Kerry penned: ‘So after years and years of putting extensions after extensions in my hair from tapes to Micro rings even bloody glue I’ve started to go bald!

‘My hair is so fine and wispy I just hate it!!!

‘And at the end of day I can take them out and give my hair the break it needs to repair!! It’s like taking your bra off at the end of the day!!! 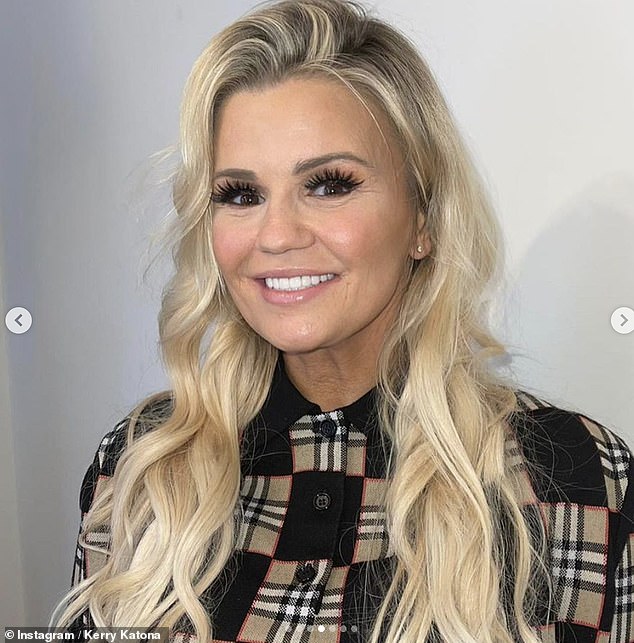 New tresses! The TV personality, 40, looked radiant as she debuted her new clip in locks which won’t do any further damage to her hair

She continued: ‘Seriously Ladies please go check them out! So easy use and gives your hair that thickness and volume we need!

Let me make this clear that this is NOT AD!!!! I’m just so bloody happy I found them’

Sharing some pictures of her hairless patch, Kerry revealed a small section at the front of her head is starting to go bald.

She also shared several snaps of herself posing with the new clip in extensions on, appearing to be very pleased with the results. 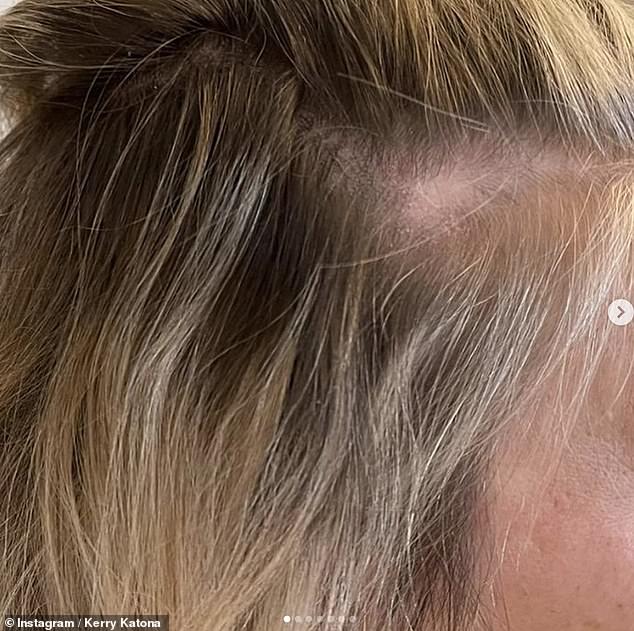 Bald: Snaps revealed a small patch at the front of Kerry’s head which had started to go bald 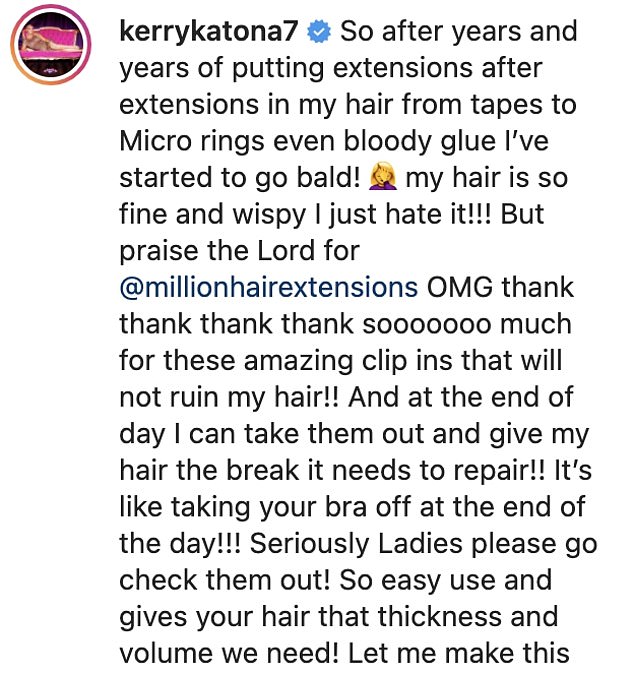 So pleased: Sharing a lengthy caption, Kerry said that taking her ‘amazing’ new clip ins out feels like ‘taking your bra off at the end of the day’

Kerry looked radiant as she posed up a storm with her long tresses perfectly styled into curls and cascading over her shoulders.

The revelation comes after Kerry showed off her curves and er toned physique while striking a provocative pose in the revealing underwear on Sunday.

Kerry claimed to feel ‘incredibly empowered and strong’ as she posed for the sexy snap and directed followers to a link to her OnlyFans page.

The sizzling lingerie set comprised of a lace red bra, which emphasised her ample assets, along with a matching skimpy thong. 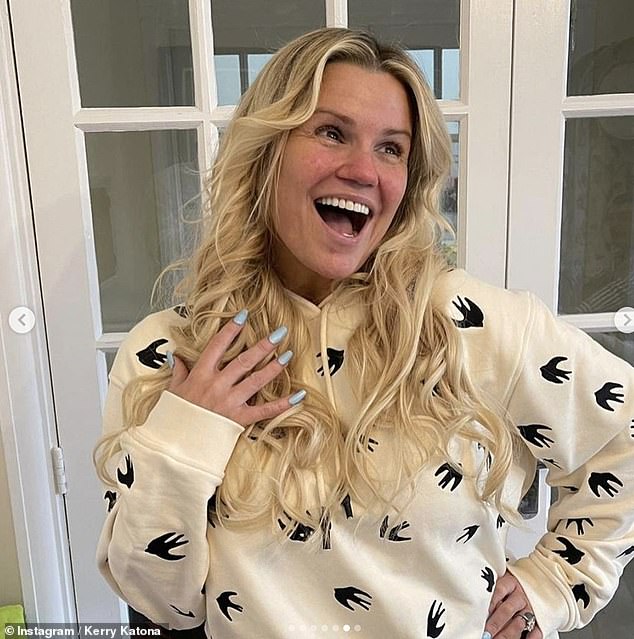 Happy: She seemed delighted with her new locks as she posed in cream bird-print loungewear 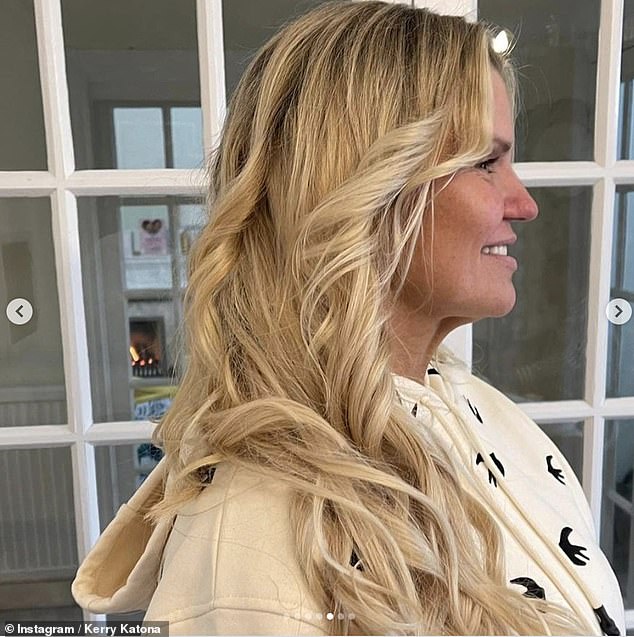 Hidden: Kerry’s bald patch couldn’t be seen at all as she modelled her clip in extensions

Kerry rocked a natural make-up look as she worked her best angle, posing with her hands above her head and styled her blonde tresses in a curly hairdo.

The reality TV personality said she felt ’empowered’ in the caption, writing: ‘Happy Sunday people. Let me make it clear how incredibly empowered and strong I feel standing here! I’m in full control for the first time in my whole life!’

In the caption, Kerry also directed followers to a link to her OnlyFans page for anyone willing to pay to pay its monthly £20 fee. 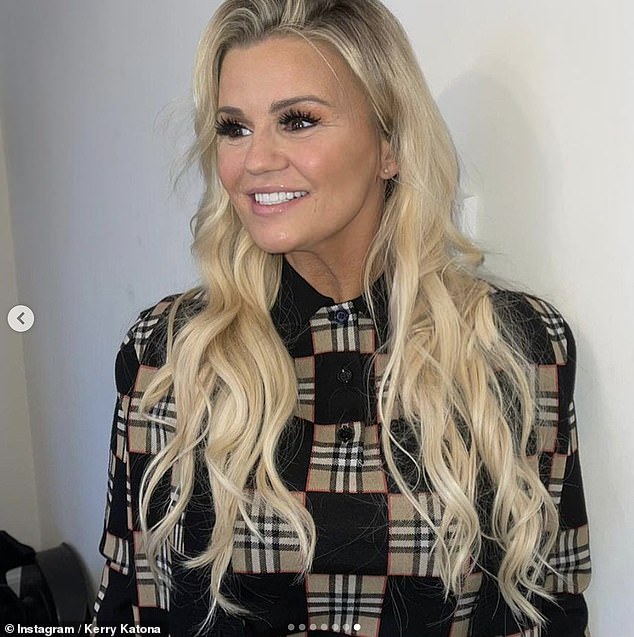 Glowing: The mother-of-five beamed a smile as she posed up a storm in her new hair 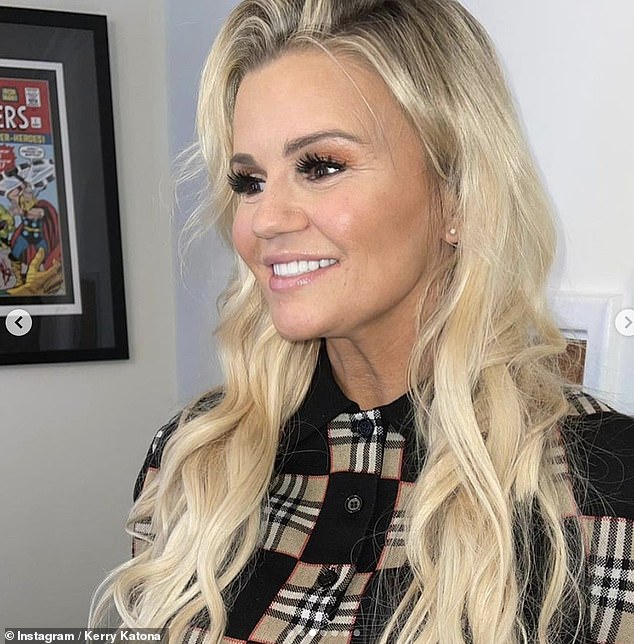 Closeup: Kerry’s revelation about her bald patch comes after she declared she’s feeling ‘incredibly empowered’ while directing followers to a link to her OnlyFans page

The former glamour model joined a host of celebrities in opening an account with the subscription only site May last year, which gives content creators an opportunity to earn extra income from subscribers.

She regularly posts sneak peaks of her OnlyFans content to her 695,000 followers on her Instagram page, showing off her curves in racy lingerie.

Meanwhile, the mother-of-five – to Molly, 19, Lilly-Sue, 18, Heidi, 13, Maxwell, 12, and Dylan-Jorge, six – recently revealed she’s hoping to buy a farm to improve her mental health after years of living with bipolar disorder.

She said that during her recent stint on MTV’s Celebs on Farm she found the ‘wholesome’ environment hugely helped her wellbeing. 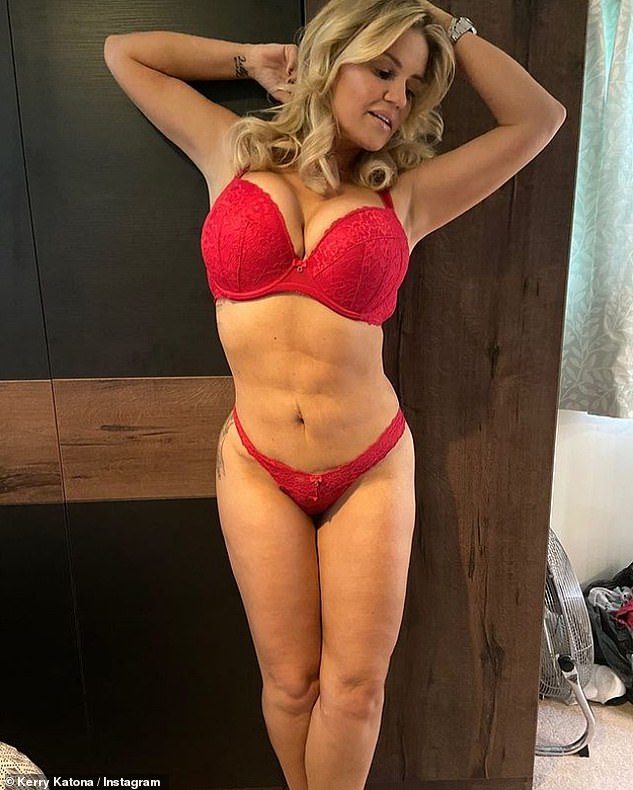 ‘Empowered’: Kerry set pulses racing as she put on a busty display while posing in red lingerie in an Instagram snap on Sunday