A YouTube star who eats thousands of calories of carbs and sugar on his web series Epic Meal Time has revealed that when the cameras aren’t rolling, he relies on the keto diet to keep his waistline in check.

‘Keto is a lifestyle I can get behind,’ Harley Morenstein, 32, from Canada told Today Food.

‘It’s very good for a sedentary lifestyle, and I spend a lot of time sitting and editing videos,’ he added. 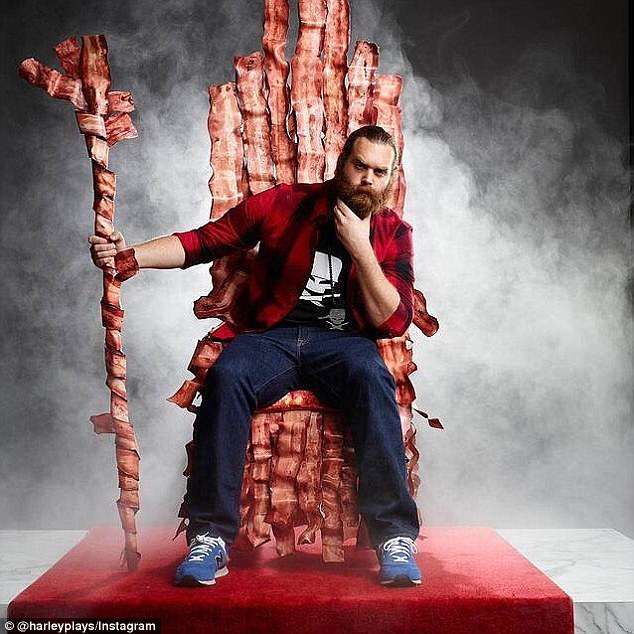 Pig out: Harley Morenstein, 32, from Canada who hosts his web series Epic Meal Time on YouTube has revealed he’s lost 60 pounds on the keto diet 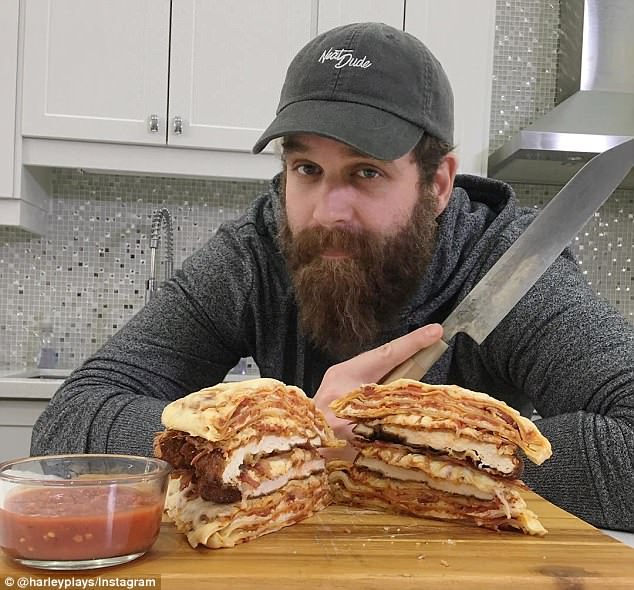 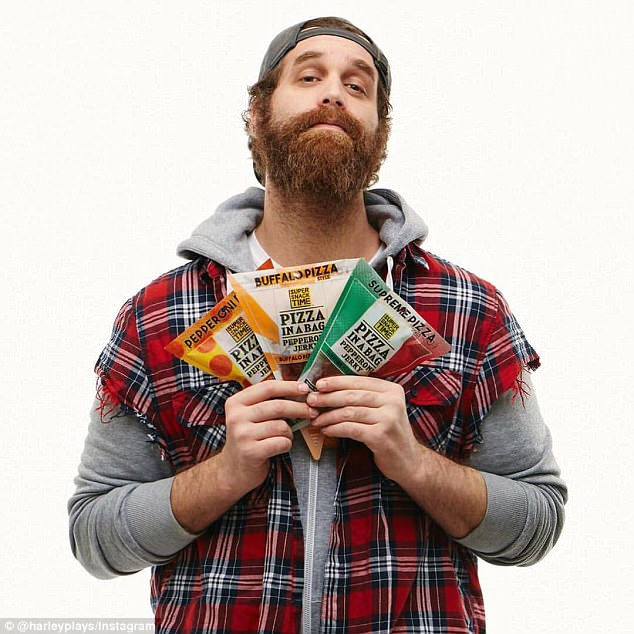 Snack: As snacking on the go can be difficult for anyone following the super strict plan, Morenstein has developed his own keto-friendly snack line, Super Snack Time Pizza in a Bag

The ketogenic diet is a low-carb, high-fat eating plan that forces the body into a metabolic state known as ketosis.

And as snacking on the go can be difficult for anyone following the super strict plan, Morenstein has developed his own keto-friendly snack line, Super Snack Time Pizza in a Bag, a pepperoni jerky that comes in three flavors.

He also detailed the other foods he relies on to keep his macros in check and told Today that ‘eggs become your best friend’.

He eats about three eggs per day and is a fan of grabbing prepackaged hardboiled eggs in the airport.

Morenstein is also a fan of bacon chips to stave off any chip cravings.

‘If you want a guac-based or nacho-based snack but regular chips aren’t part of the game plan, use bacon chips,’ he recommended.

As conventional bread is forbidden on the keto diet, the food enthusiasts have developed a love for bun-less burgers and often orders their burger in a lettuce wrap or bowl.

‘When I go to LA, it’s the easiest thing. I mean, you ask for a burger and they’re like, ‘Do you want it in a bowl or a lettuce wrap?’ he explained. ‘But when you do the same in Canada people look at you like you’re just bonkers.’ 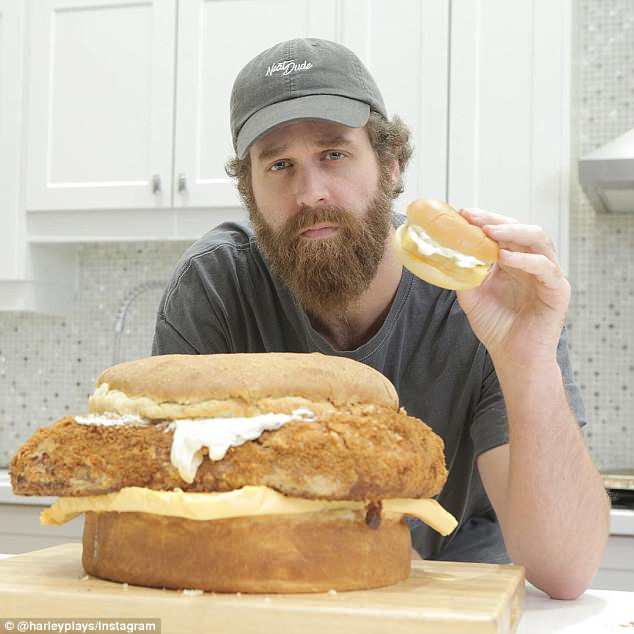 Chicken or egg: He also detailed the other foods he relies on and told Today that ‘eggs become your best friend’ on keto, pictured on his show eating a giant chicken sandwich 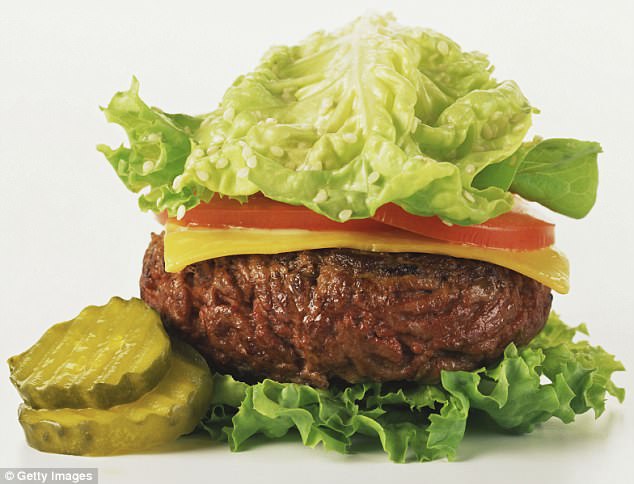 All filler: Harley has also grown to love bun-less hamburgers and shared that when he’s in LA, it’s easier to order them as people look at him funny when he goes without the bun in Canada 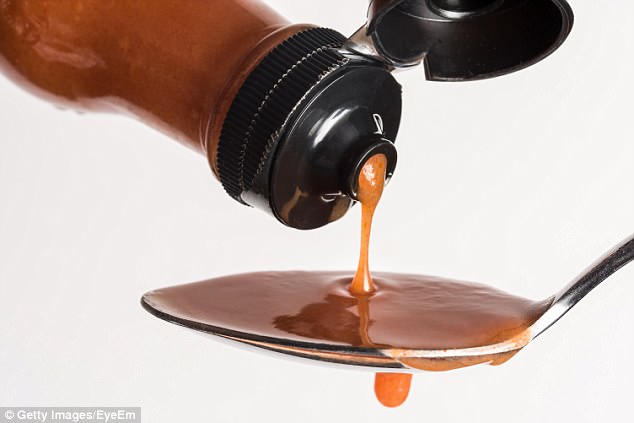 Saucy: The foodie also credits carb-free and sugar-free sauces with helping him add more flavor to his food while on the keto diet 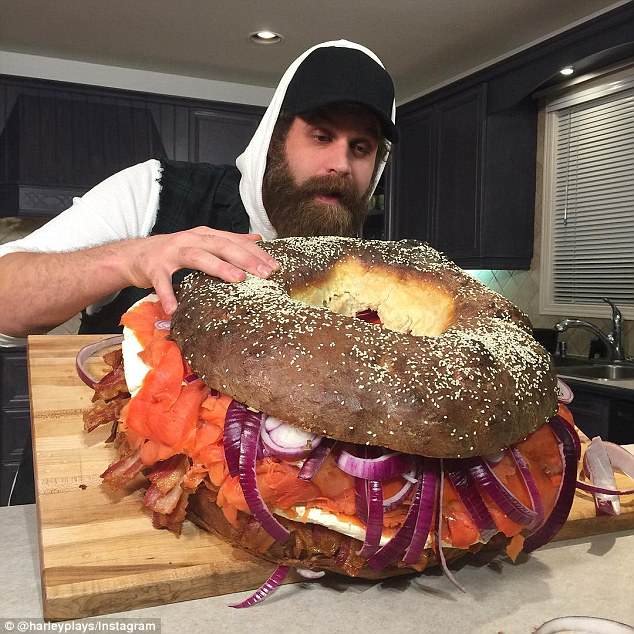 Not all bad: Harley did admit that not all carbs are bad and when he started weightlifting her realized he needed some

Cheese is also a big hit with the carb-free Canadian but he tries to limit his portions.

Morenstein also explained that carb-free and sugar-free condiments help keep him on track: ‘I put mustard on everything. But it’s got to be regular mustard. Anytime there’s syrup or sugar added, it’s not in the game. That’s why ketchup isn’t in the game.’

However, he is a fan of hot sauce: ‘I have to have a plethora of hot sauce choices handy.’

While the diet does contain lots of animals fats, Morenstein also makes sure he gets his greens in and shared that he is a big fan of bacon-wrapped asparagus.

‘If you’re doing keto, not all veggies are your friend,’ Morenstein noted, explaining that he used to think packaged beet chips were carb-free. ‘But pretty much all green veggies are guaranteed to be your friend.’

However, he also took the opportunity to share that not all carbs are bad and when he got into weightlifting her realized his body needed some carbs.

Carbs aren’t really the arch-nemesis of our body. You have your good carbs and your bad carbs.

The ketogenic diet plan explained, including what followers can and cannot eat

The ketogenic diet is a low-carb, high-fat eating plan that forces the body into a metabolic state known as ketosis.

It is also credited with helping reduce epilepsy seizures.

Foods allowed on the ketogenic diet include:

Foods to be avoided include:

With the rise of the pandemic crisis, meal delivery services gain popularity. Because people were restricted to eat in enclosed and crowded places, many chose to stay and just ordered food online. Food delivery services have become a normal part of people’s daily lives during the new normal or the time after the COVID-19 pandemic.

Restaurants, food chains, and other food businesses offer affordable, easy-to-prepare, and healthy meals for everyone. One of the niches in the food delivery service is keto meal delivery. Keto meal delivery is in demand nowadays. People who are looking for diet-friendly snacks can order online and have them delivered right at their doorsteps.

As you have read above, many people also enjoy posting their videos eating food they ordered online, giving their honest judgment or rating. Food blogs and video blogs gain a massive following. Many people become stars in social media and video-sharing apps by taking photos and videos of themselves eating their favorite or newly discovered food.

So, how do you reduce stubborn fats and maintain your ideal body weight? You don’t have to be a social media star to attain your weight goals. Starting your keto journey today is possible by replacing unhealthy snacks with keto-friendly snacks.