While the Nets have slowly climbed back up the Eastern Conference standings, their rise has come at a cost to Kevin Durant, who has played a massive amount of minutes this season.

The Brooklyn star has logged 922 minutes through 25 games – the most in the league – while his 36.9 minutes per contest ranks joint-fourth highest in the league.

On one hand, Durant’s high minutes total is actually a sign of his good health thus far, as, unlike many of his peers, he’s yet to miss a game.

Nonetheless, for a 34-year-old with recent injury issues, playing close to 40 minutes a night is likely unsustainable in the long term.

‘It’s not ideal,’ head coach Jacque Vaughn said recently. ‘While we’re in the win-now mode, win today’s game, we are behind the scenes talking about what the stretch looks like beyond tomorrow, beyond the next day. So it is on our minds.

‘We’ll map out some time where we’ll save a shoot-around and maybe not have it. So be strategic that way but ideally, he wouldn’t be playing this amount of minutes this early, for sure.’

While Durant will remain the Nets’ top scoring option barring an injury, there is reason to believe his workload can be sliced a bit.

Fellow forward T.J. Warren made his Nets debut last week after a 703-day injury layoff and already looks the part of a legitimate contributor despite any rust that may exist. 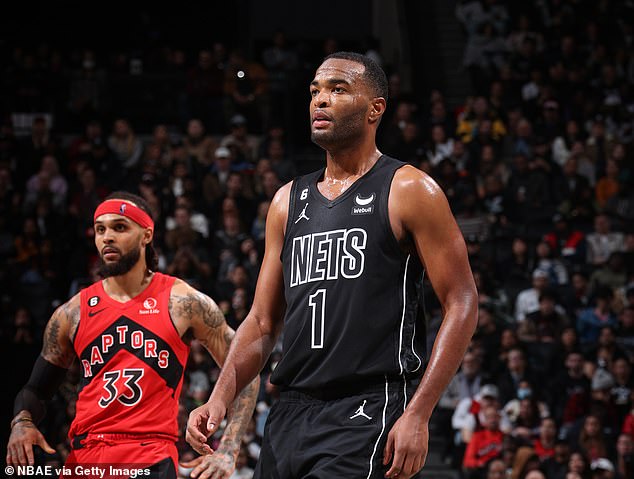 T.J. Warren could provide valuable bench scoring for the Nets in relief of Durant

Warren went 5-11 from the field for 10 points and four rebounds in his Brooklyn debut vs. the Raptors, and averaged 19.8 points per game in the last full season (2019-20) he played for the Pacers.

He’s played just 35 total minutes across two contests since returning, but figures to be a valuable bench piece for Brooklyn in relief of Durant as he continues to get up to speed.

The Nets also have been without Yuta Watanabe and Ben Simmons though neither of the pair are expected to be out long-term.

Brooklyn have been trending up since Steve Nash was relieved of his duties as head coach, as the team went 10-6 in November and is up to sixth place in the East.