Kevin Hart sued for $60M by sex tape partner Montia Sabbag, who claims he knew about filming in complaint filed days after his near-fatal crash – and in wake of $7M judgment in ANOTHER lawsuit

The woman who appeared in a 2017 sex tape with Kevin Hart is now suing the actor, claiming he and his friend worked together to plan the recording and then release the footage.

Montia Sabbag claims that Hart was seeking publicity for his comedy tour that kicked off later that year when he recorded himself with her in a Las Vegas hotel room.

She has filed a lawsuit against Hart, his former friend Jonathan Todd Jackson, The Cosmopolitan of Las Vegas and the website, Fameoulous, for their alleged roles in the tape.

Sabbag is asking for $60 million citing negligence, negligent infliction of emotional distress and invasion of privacy.

This is the latest in a line of devastating blows to Hart, who was hit with a $7 million judgment in another suit earlier this year and is currently recovering from a near-fatal car crash.

TMZ was the first to report the lawsuit. 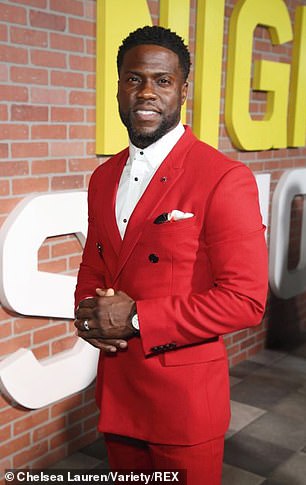 Sex, lawsuits and videotape: Montia Sabbag (left) is suing Kevin Hart (right) for $60 million claiming her was behind the recording of their sex tape

Sabbag had previously spoken about her tryst with the married actor in 2017, during an exclusive interview with DailyMailTV.

She revealed in that interview that the tape was actually filmed during the day, and said Hart was sober at the time.

The pair traveled with a group of mutual friends to Las Vegas in August of that year said Sabbag at the time, and became intimate only after arriving in Sin City.

She also said that she was unaware that the actor was married at the time to model Eniko Parrish, who was six months pregnant with the couple’s first child when Hart was filmed in Sabbag’s company.

‘I was intimate with Kevin three times in the course of maybe three days. It was fun,’ she recalled in that interview.

‘We just get along, we get each other, he’s funny, I’m funnier. We had a connection, we had chemistry. We clicked.’

She then added: ‘It was fun, he didn’t try to woo me, it was just an instant connection.’

Sabbag had no plans to even go on the trip initially, and was not aware Hart was part of the group she said in the interview.

‘I had a girlfriend who invited me to go with a few of her friends. I was like, “okay, sounds fun,”‘ said Sabbag.

‘We stayed at the Venetian hotel and we ended up moving hotels to The Cosmopolitan. I met [Kevin] on the plane, I was with a friend and we had no idea he was gonna be there.’

She continued: ‘He was with his friends. I thought he was cute, he’s an attractive man, but I wasn’t star struck or anything like that, it was super casual, he was a gentleman, a nice guy.’