From Machiavellian US politician Francis Underwood in House of Cards to crime boss Keyser Soze in The Usual Suspects, Kevin Spacey has played a range of highly believable villains.

Behind the on-screen facade he is one of Hollywood’s most popular and bankable stars, a highly-respected thespian with two Oscars to his name.

Whether gushing about Barack Obama, paying court to Venezuela’s former socialist strongman Hugo Chavez or joining British actor Jude Law on the streets of Belarus to support the democracy movement, Spacey is one of the acting world’s liberal lions.

The humanitarian champion has even set up a charitable foundation in his name to mentor young performers trying to break into show business. He is also a committed Anglophile, lauded by the British arts establishment and awarded not only a CBE but an honorary knighthood for his work at London’s Old Vic.

Yesterday, however, the 58-year-old was plunged into a sex scandal that is inviting comparisons with the uproar generated by the Harvey Weinstein allegations.

Fellow actor Anthony Rapp accused Spacey of sexually assaulting him when he was 14. Spacey apologised but said he cannot remember the alleged incident.

‘The older I get, and the more I know, I feel very fortunate that something worse didn’t happen,’ Rapp said. ‘And at the same time, the older I get, the more I can’t believe it. I could never imagine [that] anyone else I know would do something like that to a 14-year-old boy.’

The comparison with the disgraced Weinstein, whom dozens of women have accused of sexual harassment and far worse, may be pertinent in that, as Spacey himself acknowledged, his sexual behaviour has been the subject of intense debate and rumours for years.

Although Rapp’s allegations mark the first time Spacey has been accused of targeting a child, it’s clear stories of his behaviour have long alarmed others in a famously tolerant industry.

And whether it was unwitting or not, Spacey’s refusal to discuss his sexuality over the years has allowed his fans to deflect stories alleging his targeting of young men as homophobia.

In 2004, eyebrows were raised when Spacey, who was living in London, claimed he was mugged in a park in Lambeth, South London, at 4am but then dropped the complaint.

In 2015, the now defunct showbusiness gossip site Gawker ran a score of emails – sent anonymously by readers – listing the way in which the actor allegedly targeted young men. On that website, a source on the production team of House Of Cards, the acclaimed Netflix remake of the 1990 BBC mini-series, claimed Spacey solicited male crew members in their early 20s for sex in his trailer. 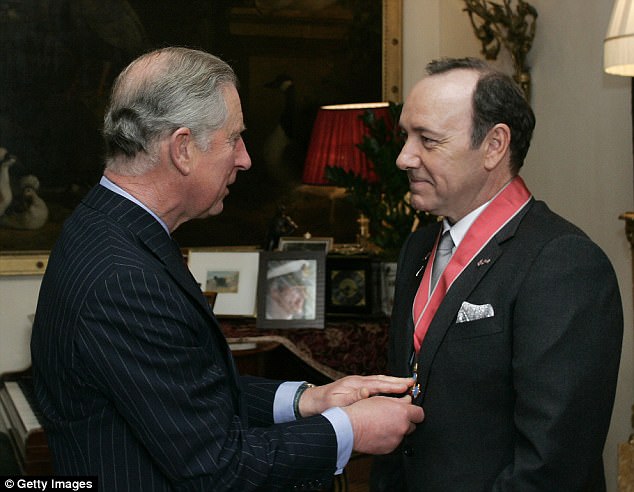 Award: Prince Charles presents the actor with an honorary CBE in 2010

Several sources who contributed to the website similarly described Spacey’s feeling of entitlement as they alleged he pursued young men at studios or on film sets in a way they say suggested that any underlings were fair game.

Another picture that emerged from the Gawker emails is that when he was not working, he would approach young men in bars and invite them to ‘private parties’ that would end in the star making drunken sexual overtures.

A man recounted being at the Sundance Film Festival in 2003 when ‘I felt a hand on my bum at the Martini bar’. The hand belonged to Spacey, he said, who invited him to a ‘swanky’ industry party. A source from New York said a friend texted him from a bar to say: ‘Kevin Spacey is here and he has his hand on my thigh.’

Another New Yorker recalled a friend telling him how Spacey chatted him up in a bar, ‘rubbing his knee (while engaging in completely benign conversation)’ before inviting him to a party. An ex-waiter at a smart Chicago restaurant said a male colleague was once invited by Spacey back to his hotel suite for a party that rapidly evaporated when the star asked everyone else to leave. Aware of the actor’s intentions, the waiter ‘thanked him for the nice evening and left’.

In another alleged incident, Spacey was at Harvard University for a function in the late 1990s and later propositioned a gay male undergraduate in a bar.

When one man, propositioned by Spacey, told him he was heterosexual, the actor reportedly replied: ‘Well, you don’t have to be a professional hang glider to try it once.’

It is all a far cry from the polished image of the transatlantic thespian, as at home in the West End as he was on Broadway, loved by luvvies and royals alike. In 2010 he visited Clarence House to collect a CBE from the Prince of Wales for the part he played in reviving the fortunes of the Old Vic.

Three years later, he received an honorary knighthood for services to British theatre and international culture. Last night questions were raised as to whether he should keep the honours.

Spacey, who had largely lived in London for more than a decade, said he felt like ‘an adopted son’. He still likes to tell US interviewers who question the tennis fan’s support for Andy Murray ‘I’m a Brit’. 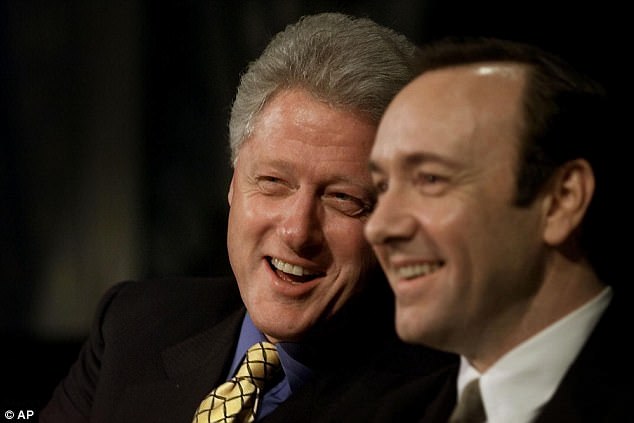 Born in New Jersey and raised in California, Spacey started as a comedian, before studying acting at the prestigious Juillard School in New York.

He made his name on Broadway, most notably in a production of A Long Day’s Journey Into Night, with Jack Lemmon who became a mentor. He expanded into TV and film work, culminating in an Oscar as Best Supporting Actor for The Usual Suspects in 1996, and four years later the Best Actor award for American Beauty.

Spacey has, throughout his career rubbed shoulders with the liberal elite. He is a close friend of Bill Clinton. Another acquaintance is Jeffrey Epstein, the convicted US paedophile financier, a one-time friend of the Duke of York. But in his private life Spacey has maintained a resolute silence.

In 2000, he took his ‘girlfriend’ to the Oscars and thanked her during his Best Actor acceptance speech. Few have ever been very convinced. Asked repeatedly if he was gay, Spacey has insisted not.

‘I’ve never believed in pimping my personal life out for publicity,’ he said. ‘Everybody has the right to a private life, no matter what their professions are.’

As Tinseltown waits nervously in anticipation of more allegations, it remains obvious that, once again, the entertainment industry may have been ‘in’ on a secret the rest of the world has belatedly learned.

An episode of the US TV comedy Family Guy once carried a joke in which the baby character, Stewie, runs across the screen shouting: ‘Help! I’ve just escaped from Kevin Spacey’s basement.’

That episode – with a gag that must have seemed meaningless to nearly everyone watching – was aired in 2005.