KFC Colonel Sanders’ belongings are set to fetch $20,000 at auction

The belongings of KFC’s Colonel Sanders could fetch a sizzling $20k (£15.5k) under the hammer after being listed by his final aide who worked for him every day for a decade.

From his final driving license to the famous white suit, belt buckle, credit cards and more – this bargain bucket list is being auctioned off by Heritage Auctions on Nov 3.

The lots were obtained by Dick Miller, 67, who worked for the Kentucky Fried Chicken founder until his death in 1980 and stayed with the company until retiring in 2008.

He believes the Colonel treated him like a ‘son’ but also ruled with an iron hand, not allowing him a day off – even expecting him to return to work the day after his wedding.

Dick, who was his driver from the age of 21, even drove took the Colonel on his final ride, to the grave where he would be buried. 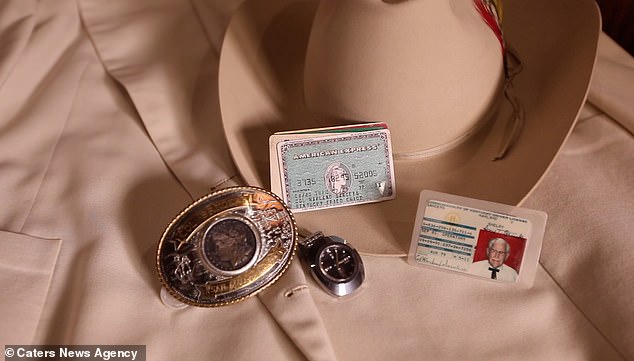 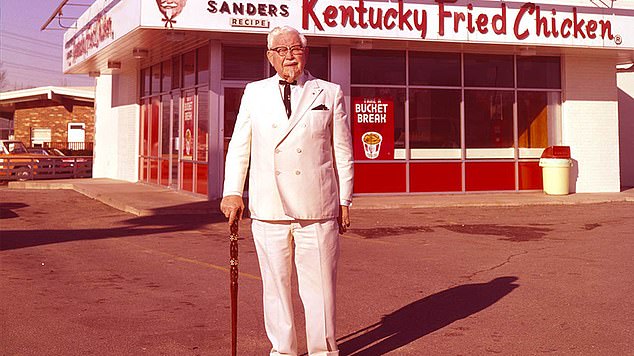 The inner pocket bears a label ‘Col. H. Sanders / April 27, 1979’ and his headwear was personally made by Stenson.

Dick, from Louisville, Kentucky, said: ‘They are all special items to me, but I took pictures of everything and I will still have the memories.

‘A franchise may be really interested in buying something the Colonel actually owned. When the colonel passed, I sold one his final car and it’s now in a museum today. 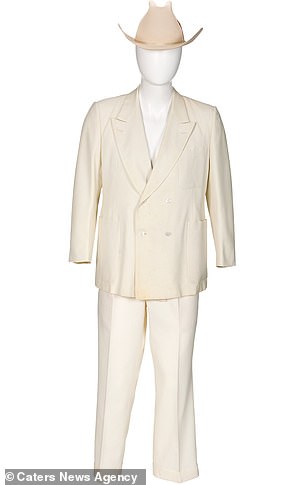 ‘I hope someone else will take them in and have as much pleasure with them as I did.

‘I was with him seven days a week, 24-hours-a-day for ten years.

‘There were three ways to work for the Colonel: the right way, the wrong way and the Colonel’s way. It was always his way.

‘He treated me like a father would, if I did something wrong there was hell to pay, I was with him every day.

‘He had a son that passed away at 18 years of age from a blood disease, I guess I was the son he never had.

‘When I told him I was going to get married and look for an engagement ring, he had Claudia [the Colonel’s wife] go back and bring a ring box.

‘It was from a trip and were at an airport, the Colonel saw a young lady crying – she had been stood up at the altar.

‘He bought the ring from her, so she could buy an airline ticket back to her home and kept the ring.

‘He let me get married on the Saturday but within 24 hours in was back at work, he told me I had the rest of my life to consummate the marriage.’ 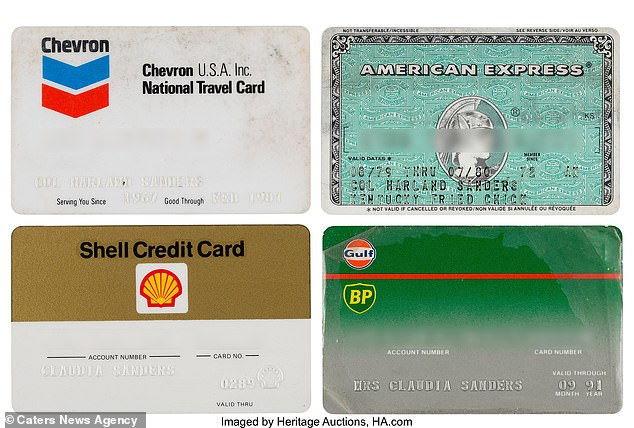 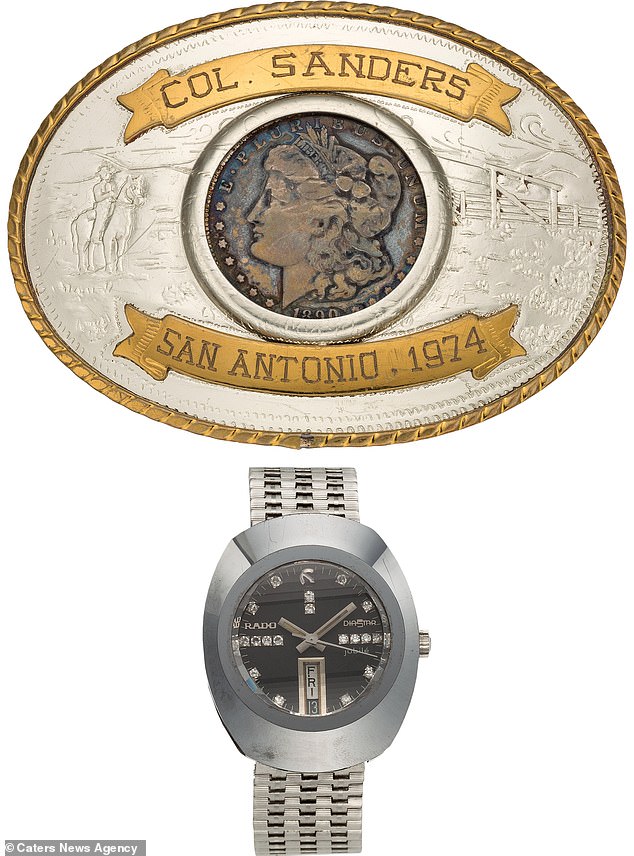 Higher ticket items include Colonel Harland Sanders personally owned and worn belt buckle and rado watch which are estimated at $1,000

Also, up for auction is the last driving licenses issued to Colonel Harland and Claudia Sanders, featuring their details and colour photographs, which could fetch $1,000 (£780).

Dick said: ‘The drivers licenses of Claudia and the Colonel were the last state issued driver’s licenses before they passed away.

‘The one for Colonel Sanders would expire just beyond when he passed away.

‘These items Claudia gave to me after the Colonel passed away.

‘Sometimes when the Colonel and I walked out, he got behind the wheel and I got in the other side to put the seatbelt on.

‘I let him drive some days. So at times I was the one being chauffeured.

‘I’m the only person out there that can say they literally drove their boss to their grave.

‘After the church service was over with, I was asked if I would drive the hearse and, so I took him on his last ride.’ 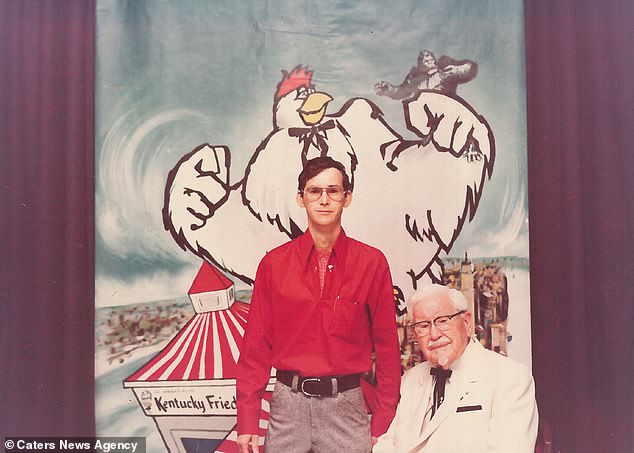 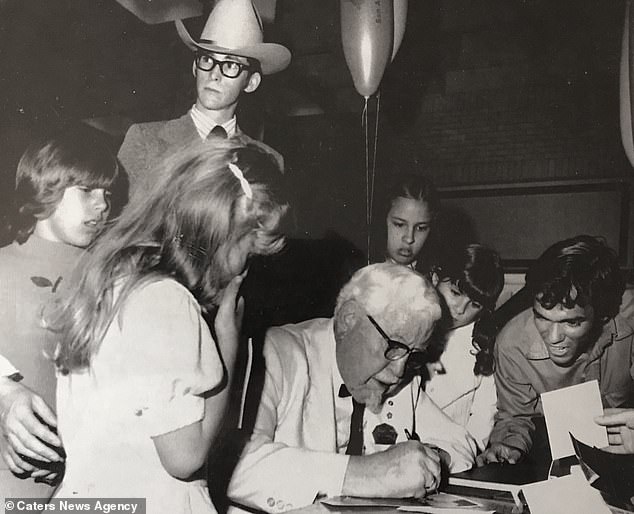 Additionally, featured is a combined belt buckle and watch worn by the Colonel, that have an estimate of $1,000 (£780).

While the watch that is still working, boasts a charcoal face with rhinestone markers.

Finally, three signed groups of Sanders’s credit cards are up for grabs, including an American Express card signed by the Colonel and his associate Dick Miller.

The items will feature in Heritage’s Entertainment & Music Memorabilia Signature Auction on November 3 in Dallas, Texas, USA and online.

Dick says the unseen side to the Colonel was his generosity, with him donating all produce growing in his quarter acre garden away.

Also, after driving his car off the road and having to hitchhike back into town, he vowed to never to pass a hitchhiker on the road.

Dick said: ‘The Colonel was taken aback by the well-dressed gentleman [who picked him up] and vowed that if he ever amounted to anything he would never pass a hitchhiker.

‘Any time we were out in the car, no matter how they looked, we would pick them up.’