Union leaders are demanding cash compensation for thousands of KFC staff who have lost out following mass branch closures.

Workers have been sent home since the weekend because chaos in a new delivery system meant restaurants ran out of chicken.

Many are on short-term or zero hours contracts which means they have lost shifts and – potentially – pay.

KFC says that it will continue to pay staff it employs directly in company owned restaurants based on an average of normal working patterns.

The problems arise for the more than 19,000 staff employed in the 780 KFC outlets in the UK and Ireland that are run by franchisees.

It seems the majority of these independent businesses will offer some form of payment to staff to cover the shifts they have lost.

However, staff in 46 KFC branches have been given no guarantees that they will get any money to make up for lost shifts.

And workers employed by another 26 have been told to treat the break as paid holiday, which may be difficult depending on family circumstances.

Some staff have spoken out about losing money they need to pay bills and put food on the table.

Speaking earlier this week, one employee at a branch in Devon said: ‘Workers are not getting paid, which we think is unfair as it’s not our fault.

‘We’re not happy about it at all. We have been told to be on standby so we have to be around, so technically we should be getting paid.

‘We are being told to put it through as holiday but that means using our holiday pay.

‘I’ve heard staff at other KFC branches are also not getting paid. I have already lost over 30 hours of pay.’ The GMB union is demanding all KFC workers, regardless of whether they are employed directly or through a franchise, do not lose out.

The crisis at KFC follows the company’s decision to ditch its existing delivery company Bidvest Logistics in favour of DHL, which took over just last week. 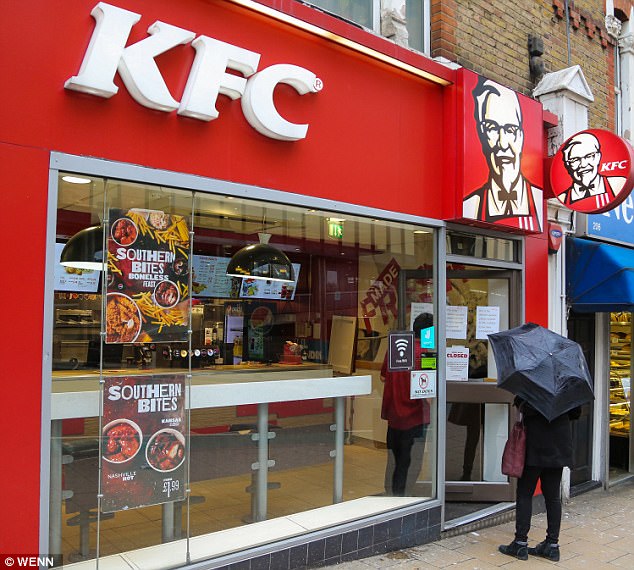 A failure in its computer system meant that deliveries out of its vast delivery hub and warehouse in Rugby went into meltdown. Restaurants ran out of chicken and were forced to shut, making KFC a laughing stock.

It has also emerged that DHL failed to register the warehouse as a meat cold storage and distribution centre with the authorities before it took over the delivery contract.

There have been long queues of lorries outside the Rugby warehouse trying to get orders out to restaurants across the country.

The GMB union said KFC and DHL should join forces to make sure affected workers are paid for the hours they have lost.

The union’s national officer, Mick Rix, said: ‘Our members in KFC franchises are missing out on shifts with no idea when their stores will reopen.

‘They’ve told us they’re now being advised to use their holiday entitlement to cover the working time they’ve lost as a result of this mess.

‘For a multi-billion pound global giant to treat workers at the sharp end like dirt because of their foul up is a disgrace.

‘UK workers in KFC restaurants are losing out due to Colonel Chaos – their contracts are stuck in the bargain bucket.’ KFC bosses said only a small number of staff are on zero hours contracts and they are taking steps to protect staff.

A spokesman said: ‘Our team members have been incredibly understanding and eager to help in any way they can, from using time to do additional training, maintenance and clearing local litter, to going to our depot in Rugby to help with the backlog.

‘We understand the impact this is having on them – they have families to care for and are dependent on their wages – which is why we’re doing everything in our power to fix the issue as soon as possible.’ The number of branches that are closed fell from a high of around 600 to 272 yesterday and will fall further in the coming days.

KFC said: ‘We still expect the disruption to some restaurants to continue over the remainder of the week which means some will not be open and others will operate with a reduced menu or shortened hours.’